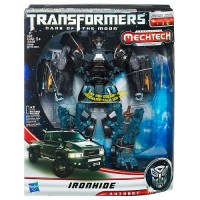 Dark Of The Moon Leader Class Ironhide is currently available at ToysRUs.com. It is in stock now for shipping. If you are having trouble finding certain Dark Of The Moon toys in your neck of the woods, or are just anxious and don't want to wait for him to show up, then get your credit card ready. It also ships free with orders of $100 or more. You can order here, or just click on the image below.

Don't forget to help your fellow Seibertronians out by reporting your Transformers toy sightings in our official sightings section and/or on our sightings forum.

Re: Dark Of The Moon Leader Ironhide Available at Toys R Us.com (1240415)
Posted by GetRightRobot on June 15th, 2011 @ 7:32pm CDT
I really dig the added complexity that comes with leader class figs, but I passed on Brawl and just can't bring myself to pick this up....yet. Hopefully it will hit the discount shelf at Wally world like SS, and ROTF megs

CrimsonPrime wrote:Huh I dont even like the two molds.Ironhide cause of the kibbles everywhere and simplistic transformation for a leader class while Optimus cause he barely even look like his CGI in robot mode.

I am currently waiting for Shockwave and HA Roadbuster to hit my local TRU and also waiting for more pics of HA Soundwave and confirmation on HA Topspin.

kibble everywhere?? you're kidding right? he's got a couple panels on his arms. and so what if the transformation isn't a giant messy puzzle.. you're going to skip out on one, if not the best figure of the line so far just because of a couple panels on his arms that aren't even all that noticeable when you have him in hand? .. you're missing out big time. leader ironhide is awesome. very awesome. it puts all of the voyagers and deluxe to shame. you should at least give him a try, then return it if you don't like it.


SlyTF1 wrote:I can't wait for Ironhide! I got the Voyager Prime mode last night and he's not bad. I think he's the best Voyager Optimus we've gotten. His feet are so accurate! But I will get this one just for the axe.

CrimsonPrime wrote:while Optimus cause he barely even look like his CGI in robot mode.

That's a hell of a reason not to buy a toy. 2007 Optimus didn't look like his CGI version, nor did 2007 Starscream (bearly). Almost half of the figures of the bayverse line don't come 70% close to the CGI apperance. A reasonable determination is on articulation (and kibble amount, I guess), accuracy on how you want the figure to look, and so on. I understand this is your method, and that second reason came close to it, and I don't want to change that. It's just not the best method. Do whatever you want, though. Have a nice time toy hunting
Re: Dark Of The Moon Leader Ironhide Available at Toys R Us.com (1240540)
Posted by DJLazer on June 15th, 2011 @ 11:29pm CDT
leader ironhide is awesome

RodimalToyota wrote:also If you want more pain, Mirage gets killed by Soundwave, Soundwave just rips his head off while they have the autobots imprisoned, no mention in the GN, or comics about Wheeljack dying, and the remaining autobots are Optimus, Rachet, BB, wheelie, Brains, Wheeljack, and Sideswipe. more spoilers bext.[spoiler]Prime B-heads shockwave, soundwave is crushed by falling debris from the ship Wheelie and brains highjack.

It was Starscream that killed Mirage. Soundwave uses his head as a puppet to torture Bumblebee. As for Wheeljack, um...well, do you want to be spoiled? If so, I'll tell you.

As for Soundwave...no. He's not crushed. That too, I will tell you, but only if you want to be spoiled.

Now, onto the main topic...

I have no desire to purchase the Optimus Voyager mold. Blech. Sentinel just isn't done justice by anything but the Leader Class. It's an excellent figure.

As for Ironhide...he's awful in Leader Class. I think it's great they went for ease so kids could enjoy him, but he's pretty simplistic, and waaaaay out of scale. Not to mention his colors are just awful. He's an easy pass for me. Kinda sad though, I was looking forward to him at one point. =\
Re: Dark Of The Moon Leader Ironhide Available at Toys R Us.com (1240634)
Posted by Rodimus Prime on June 16th, 2011 @ 2:02am CDT
I got Ironhide and absolutely love it. It's the best of the DotM line so far. Way better than Sentinel could ever be. I wish Shockwave got a leader Class, but he probably won't. My GF got me the Voyager, so I won't complain anyway...