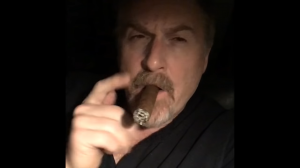 Merry Christmas everyone! After Optimus Primal and Rhinox read "The Night Before Christmas Beast Wars Edition," Megatron decided to once again strike back this year and sing along in his own video!

Okay, in all seriousness, in parallel to Garry Chalk's annual Christmas greetings, David Kaye also does the same, as seen last Christmas Eve. David Kaye, in dark and ominous lighting, who is ready to tuck us in after a little Christmas Carol from Beast War's Megatron.

For those who don't know, David Kaye, in Transformers, has voiced Megatron and Savage Noble in Beast Wars and Beast Machines, Megatron/Galvatron in the Unicron Trilogy, Optimus Prime and MANY more characters in Animated, and finally, Hardshell, Hammerstrike, and Slashmark in the Aligned continuity.

So, we hope this gets you in the jolly mood, as Beast Wars Megatron puts you to sleep.

Though, I would have thought cigars wouldn't be a very wise thing for voice actors to use, so as to keep their voices and lungs healthy for the job. But, what do I know?

As for the song, though it's simply done for festive fun, the notion of BW Megatron seeing three ships with an Autobot and a Maximal, all heading to Unicron, where they were engaged by Predacons, and all on Christmas... while a bit nonsensical on the surface, could actually fit into the Universe War. Heh, Christmas Day in the Universe War.