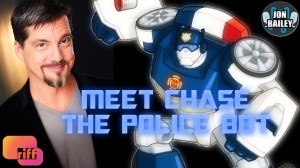 Seibertronian jON3.0 - whom you may also know as Jon Bailey, the EpicVoiceGuy and voice of Optimus Prime in Machinima's Combiner Wars series - recently sat down with DC Douglas (voice actor for Chase the Rescue Bot) to watch an episode of the Rescue Bots series and discuss the business of voice acting. The two watch one of Douglas' personal favorite episodes - I Have Heard the Robots Singing, which you too can watch along with (provided you have a copy of the episode) and listen to their running commentary on. Also present is a bit of talk about the business, how Douglas got involved, his inspirations for the character of Chase, some behind the scenes discussion (which Jon promises includes some great stories), and more!

Check out the embedded video below, and share your thoughts! Don't forget to go show DC Douglas some love for his work (he's on Facebook and Instagram at @mrdcdouglas, Twitter at @dc_douglas, and he has a Youtube channel too), and talk with jON3.0 about the experience on Youtube or right here on our very own Energon Pub forums!

jON3.0 wrote:I recently had the opportunity to sit down with DC Douglas - voice of Chase the Rescue Bot - and watch one of his favorite episodes! We talked about how he got the job, his inspiration for the voice, stories from the studio and more! We also played the Rescue Bots mobile game which is coming in a few weeks. Check it out! Good to be back. More TF stuff coming soon!