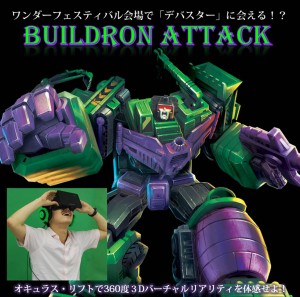 Takara updated their official website with some interesting information. At Wonder Festival on July 26 in Japan you can stop by Takara Tomy's booth and experience the "Buildron Attack" simulation in 360-degree virtual reality with the Oculus Rift!
Buildron is, the Japanese name for the Constructicons while Devastar is their name for Devastator. Check out the translated details from Takara's site below and remember keep your optics tuned to Seibertron.com for the latest in news and updates!

In order to experience a 360-degree 3D virtual reality of Okyurasu-lift, to get the tickets in the Tomy booth, please join us in the specified time. Tickets I have been distributed on a first come, first served basis. Soon reached the planned number of sheets will be distributed end. Duration of experience we have planned about 2 minutes. On the day, there are times when it can not be your guided by equipment troubles. Please note.

Constructicons that appeared in 7 / 26 wonder-TT booth oculus is based 3D data of the toy and, enables exact deformation combined on a video screen. ※ Oculus tickets and distributed in order of arrival will end and reached at will number #TT_TF

Re: Devastator Experience With Oculus Rift at Wonder Festival Summer 2015 (1712735)
Posted by dragons on July 24th, 2015 @ 7:48am CDT
Will there video of this I don't know much about it except it makes some people motion sickness by using it and it's for pc only I saw orcalus video on YouTube of gameplay in action