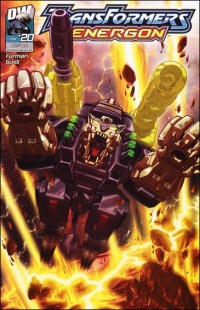 There's good news for fans of the Dreamwave Transformers Energon comic, which was sadly left incomplete due to the company's bankruptcy. On his blog, Simon Furman will be posting summaries of the uncompleted issues starting with a character list to make sure everyone is caught up. For those who have been desperately seeking closure, you can visit his blog here!

Wasn't Energon supposed to go for 18 issues like Armada? If so, we're missing 6 issues then?

If IDW can publish a lot of Dreamwave issues, why can't they finish Energon? I realize not having a current supporting toyline is a big issue, but I for sure would buy up the remaining issues quick.
Re: Dreamwave Energon: Revisited (1151189)
Posted by Neo Tallgeese on November 27th, 2010 @ 4:24am CST

Bumblevivisector wrote:For a second I thought we'd be getting the actual comics from IDW, but this is still pretty awesome.

Bumblevivisector wrote:For a second I thought we'd be getting the actual comics from IDW, but this is still pretty awesome.

Same here. Maybe one day someone will finish up the sereis and put it into a graphic novel.

Don't get your hopes up, Hasbro/Takara won't bother with this since they can't use it to sell toys. And there might be some legal nonsense involved with DW.
Re: Dreamwave Energon: Revisited (1152895)
Posted by Energon on December 1st, 2010 @ 5:34pm CST
Some of the writers and artists did not get paid for their work on issues that were in print when DW was having hard times including Simon. So IDW would have to pay for the work as well as work out legal issues.
IDW has printed loads of old stuff that has nothing to do with Hasbro releasing toys for example, the old Budanski G1 stories.
Re: Dreamwave Energon: Revisited (1155907)
Posted by Dead Metal on December 10th, 2010 @ 1:20am CST
Simon Furman has released even more script wraps for the unreleased Dreamwave Transformers: Energon comic series on his blog.

And Simon Furman's conclusion to this series can be found by clicking here. Re: Dreamwave Energon: Revisited (1155911)
Posted by ltivey on December 10th, 2010 @ 1:39am CST
I would love this Energon series in Graphoic Novel form. I emailed Chris Ryall few years ago asking here is the email exchange:

Just wanted to ask if the legal court stuff has been sorted regarding the Old Dreamwave stuff as i see that Amazon have listed on there website, Vol 3 of Gen 1 no. 0 -5 for March 2009 release. Is this correct?

We can print those but can't print the stuff that has never been published or finished.

All the DW stuff that was never finished is off-limits to us--it's all in bankruptcy court until they settle up with Hasbro (which will probably never happen).

Big fan of all IDW's Transformers comics & books. Just read your Msg Board that the next spotlight will be Blaster, Thank you for this, very interesting transformer to play with.

Do have a question over the old Dreamwave Books, is anything happening with the Gen 1 Volume 3 (omens of evil) and Micromasters Stories that they Produced, and other TF comics that were never finished, does IDW have those licenses. They would be very nice to have as Graphic Novels on the shelf.

ltivey wrote:We can print those but can't print the stuff that has never been published or finished.

All this means is that IDW can reprint...