Dreamwave Transformers - The Unpublished Scripts up for Sale on Ebay 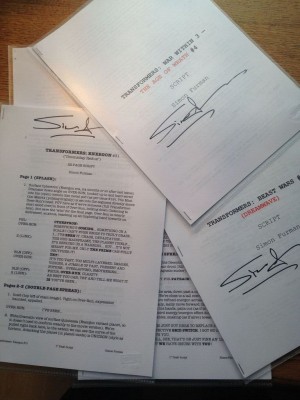 Remember a time about 14 years ago when Dreamwave comics were running and then they ended with some plot threads left glaringly unattended? Well fear no more! Simon Furman, the writer at the time, as placed the unpublished scripts on Ebay for £40 plus postage & packaging, and they are signed by him as well! You can find that auction HERE. So go out and buy your own, as they are limited.

For the first time, all the unpublished scripts by Simon Furman from the end of the Dreamwave era of Transformers comic books are being made available in one 'dream' package. When Dreamwave ceased publishing, several series I was writing at the time (Transformers: The War Within - Age of Wrath, Transformers: Energon and Beast Wars Transformers) ended in mid-flow, or before they'd even begun, with storylines left dangling. Since then I've made a few available at conventions but now you can pick up the lot (including the never-before-offered Energon scripts) in one fell swoop. All scripts are signed individually by myself. You get:

No auctions, just a buy it now price of £40 plus postage & packaging. Will ship to worldwide.

Sabrblade wrote:Interesting, but not sure what further information could be gleaned from these that hasn't already been gleaned and posted online in years past.

But these might be specific enough that they'd enable some talented fans to draw up the story and post online for free, like someone did for that unused G1 S3 script about the microchip sculpture. Unless that could somehow land someone in legal trouble.

Or have there already been a lot of fan comics based on Dreamwave's loose ends? I never actually looked.
Re: Dreamwave Transformers - The Unpublished Scripts up for Sale on Ebay (1828615)
Posted by o.supreme on September 26th, 2016 @ 11:50am CDT
pass...I would love to have unpublished scripts of the G1 ongoing, but I doubt those will ever see the light of day