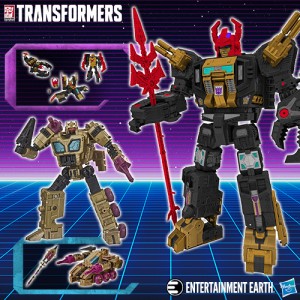 Transformers Generations Selects War for Cybertron Titan Black Zarak - Exclusive
Double Titan Master: Features a Deluxe-scale Titan Master who converts into the head of Black Zarak. Fans can remove the head and convert to the smaller Titan Master!
Black and gold triple changer Black Zarak toy converts into Modular Battle Station mode in 39 steps then to scorpion mode in 33 steps. Includes the Tyrant Spear.
21-inch robot Titan Black Zarak figure, 11 accessories, and instructions.
Own the Decepticon from the Japanese series, Transformers: Super-God Masterforce! It's the transforming robot base you never thought you would have a chance to own! The Decepticon Headmaster (or is that Destron Transtector?) is back and ready to change from robot to city to giant robot scorpion. Also, he will crush the Autobots. The removable Headmaster transforms into a smaller robot, and this toy's base mode is fully compatible with A.I.R. Lock System ramps and the C.O.M.B.A.T. System blast effects. Black Zarak has never been bigger, or available to North American Transformers fans, and now he can be yours... if you order today!

This Black Zarak figure is inspired by the original 1988 toy release, based on the Super-God Masterforce cartoon. The figure converts from robot to base mode in 39 steps then to scorpion mode in 33 steps. Figure comes with classic Tyrant Spear and shield accessories, plus shoulder cannon details. Spear accessory breaks apart into pieces that can store on the figure’s sides in scorpion mode. Head of spear accessory attaches to tail in scorpion mode. Shield accessory attaches to figure’s arm in robot mode. This Black Zarak figure’s head converts into a Deluxe-scale figure featuring battle-damage deco. Remove the head of the Deluxe-scale figure and convert to an additional smaller figure.

Today is Hasbro Pulse Fan Fest, and an enormous number of Transformers have been announced. Get in on the fun and check out the new merch!

See ALL Hasbro Pulse Fan Fest Transformers here! A detailed breakdown of all the new items is below.

We just received a large number of items this week, so don't forget to pick up these bestsellers and classics while supplies last:

IV. And the Rest of Hasbro Pulse Fan Fest

A huge number of new items were announced by Hasbro today. To see them all, click here!

Be sure to check out our Star Wars Black Series Pulse Trooper Entertainment Earth Exclusive!

We have two surprise new Transformers launching today! Both toys are returning favorites with even better paint jobs, drawing inspiration from Netflix’s Transformers: War for Cybertron series as well as the theatrical Transformers: Bumblebee movie. Even if you have their original releases, you won’t want to miss the added grease, grime, and battle damage added to these two awesome figures coming later this year!

We just received many items this week, so don't forget to pick up these best-sellers and classics while supplies last: