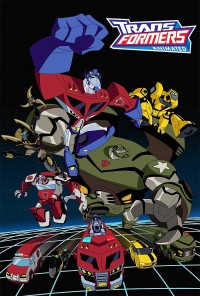 For those interested in the upcoming Japanese cartoon version of Animated, TFW2005 member DrillBit has scanned and translated the latest edition of Figure-Oh magazine. You can see his original post by clicking here but we've provided you with some highlights.

The first four episodes have been announced. The first three are the original three part miniseries known in the United States as "Transform and Roll Out" but these episodes are now known as "New Chapter! Transformers," "Hero, The name is Autobot" and "Secret of the Allspark," respectively. The fourth episode to be shown will be "Operation Soundwave," which was titled "Sound and Fury" in the US and actually was the tenth episode shown here. The placement of this episode fourth would seem to raise some continuity issues, especially involving Megatron's status at that point so it will be interesting to see if any editing is done to ease that.

Here is the official voice cast roster for the Japanese version of the cartoon. You might recall that Ironhide is simply Bulkhead's Japanese name. Longtime TF cartoon fans will recognize a few of these names because of their roles in past series such as the Japanese dubs of Beast Wars, Armada and Energon.

Stay tuned to Seibertron.com for the latest coverage of Japan's TF: Animated cartoon and toyline and of course everything else Transformers related!

Re: Episode Guide and Voice Cast info for Japanese Transformers: Animated cartoon (1056514)
Posted by Bouncy X on March 21st, 2010 @ 11:06am CDT
ah, so this is just a japanese dubbed version of the american cartoon? i was wondering if they were maybe pulling a Beast Wars and creating their own cartoon from scratch with the same concept and title.

assuming War for Cybertron is a success, it would be cool to see an animated series based on that game or least some DTV movie to coincide since thats all the rage with video games these days.
Re: Episode Guide and Voice Cast info for Japanese Transformers: Animated cartoon (1056619)
Posted by Badass Grimlock on March 21st, 2010 @ 8:42pm CDT

Sabrblade wrote:Holy cow! This is terrible and wonderful all at the same time!

FREEDOM IN A CUP!