EXPERIENCE THE FINAL BATTLES OF THE TRANSFORMERS HOME PLANET IN TRANSFORMERS: FALL OF CYBERTRON 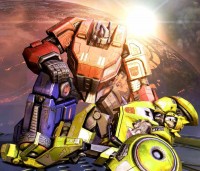 
EXPERIENCE THE FINAL BATTLES OF THE TRANSFORMERS HOME PLANET IN TRANSFORMERS: FALL OF CYBERTRON

Santa Monica, CA - August 21, 2012- Fight through some of the most pivotal moments in the TRANSFORMERS saga with Activision Publishing, Inc.'s (Nasdaq: ATVI)TRANSFORMERS: FALL OF CYBERTRON video game available now at retail outlets nationwide. Created by acclaimed developer High Moon Studios and serving as the official canon story for Hasbro's legendary TRANSFORMERS property, TRANSFORMERS: FALL OF CYBERTRON gives gamers the opportunity to experience the final, darkest hours of the civil war between the AUTOBOTS and DECEPTICONS, eventually leading to the famed exodus from their dying home planet. With the stakes higher and scale bigger than ever, players will embark on an action-packed journey through a post-apocalyptic, war-torn world designed around each character's unique abilities and alternate forms, including GRIMLOCK's fire-breathing DINOBOT form and the renegade COMBATICONS combining into the colossal BRUTICUS character.

"This is where it all began, it's the epic story of the TRANSFORMERS leaving their home planet," said Peter Della Penna, Studio Head, High Moon Studios. "From day one, we knew we were going to create the definitive TRANSFORMERS video game, a phenomenal action experience combining a deep, emotional tale with one-of-a-kind gameplay that lets you convert from robot to vehicle whenever you want."

"This is the fall of their homeworld, and by far the biggest scale we've ever seen in a TRANSFORMERS game," said Mark Blecher, SVP of Digital Media and Marketing, Hasbro. "We could not be any happier teaming up with the great talent at High Moon Studios to deliver the official backstory of the colossal battles that led to the TRANSFORMERS' exodus from Cybertron. We can't wait to have fans and gamers experience this amazing title."

TRANSFORMERS: FALL OF CYBERTRON features some of the most recognized voice talent in the franchise, with the iconic Peter Cullen and Gregg Berger, the legendary voices of OPTIMUS PRIME and GRIMLOCK from the original TRANSFORMERS animated TV series, reprising their roles for the game. Also joining the roster are voice-over veterans Nolan North (BRUTICUS, CLIFFJUMPER and BRAWL), Troy Baker (AUTOBOT JAZZ, JETFIRE and KICKBACK), Fred Tatasciore (MEGATRON, RATCHET and METROPLEX) and many more.

After experiencing the game's heart-pounding story campaign, players can take their skills online in competitive multiplayer. TRANSFORMERS: FALL OF CYBERTRON features the most in-depth, advanced customization ever seen in the franchise, allowing fans to choose their head, shoulders, arms, legs, wheels, wings, vehicles, weapons, colors and much more to create the TRANSFORMERS character they've always dreamt of. Players can then take their personalized characters straight into blistering AUTOBOT vs. DECEPTICON multiplayer matches in a variety of game modes to prove their dominance. Additionally, fans can assume the role of their favorite named TRANSFORMERS characters in the four-player co-op Escalation mode. Teamwork is vital as they defeat increasing waves of enemies and band their resources together to purchase weapons and explore new areas.

Hasbro action figures based on several of the key characters in the style of the game including OPTIMUS PRIME, AUTOBOT JAZZ, and SHOCKWAVE are also currently available at select retail locations. More figures based on characters seen in the game, including the combiner BRUTICUS with be available later this year. The fan favorite character GRIMLOCK, will become available in spring 2013.

About Hasbro
Hasbro, Inc. (NASDAQ: HAS) is a branded play company providing children and families around the world with a wide-range of immersive entertainment offerings based on the Company's world class brand portfolio. From toys and games, to television programming, motion pictures, digital gaming and a comprehensive licensing program, Hasbro strives to delight its global customers with well-known and beloved brands such as TRANSFORMERS, LITTLEST PET SHOP, NERF, PLAYSKOOL, MY LITTLE PONY, G.I. JOE, MAGIC: THE GATHERING and MONOPOLY. The Company's Hasbro Studios develops and produces television programming for markets around the world. The Hub TV Network is part of a multi-platform joint venture between Hasbro and Discovery Communications (NASDAQ: DISCA, DISCB, DISCK), in the U.S. Through the Company's deep commitment to corporate social responsibility, including philanthropy, Hasbro is helping to build a safe and sustainable world for future generations and to positively impact the lives of millions of children and families every year. It has been recognized for its efforts by being named one of the "World's Most Ethical Companies" and is ranked as one of Corporate Responsibility Magazine's "100 Best Corporate Citizens." Learn more at http://www.hasbro.com.

Activision maintains operations in the U.S., Canada, the United Kingdom, France, Germany, Ireland, Italy, Sweden, Spain, Norway, Denmark, the Netherlands, Australia, mainland China and the region of Taiwan. More information about Activision and its products can be found on the company's website, http://www.activision.com.