The first picture of Takara Tomy's upcoming UNICRON remold/repaint was leaked today. Don't have an original Transformers Armada UNICRON? Here's your chance thanks to fellow Seibertronian DaiShanPrime who posted a Universe packaged UNICRON in our Carbombya Buy/Sell/Trade forum. 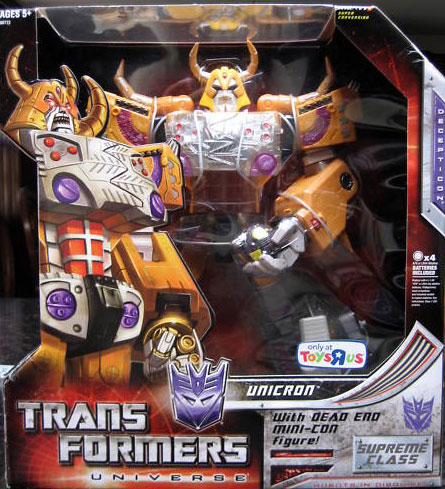 Don't forget to check out Seibertron.com's galleries of UNICRON!

Top-rated eBay seller frenzy_rumble has posted an incredible custom Leader Class STARSCREAM figure on eBay. You've got to check out the pics of this beautiful custom that's already up to $610 with less than 16 hours to go. Here's the item description from this auction:

frenzy_rumble wrote:Customizing Details :
This auction is for the customized Transformers Leader Class Decepticon : Starscream (Revenge of the Fallen)

Every so often Hasbro hints towards a figure I am very excited to get my hands (and paint brushes) on. A perfect example is this Leader Class Starscream. What an amazing figure, by far my FAVORITE Movie-Line figure to date. The details, articulation, and entire toy is so perfectly executed, it's a must have for all and every Starscream or Transformer fan. To begin with, I removed all the "inaccurate" tattoos (patterns) on his Jet and Robot mode, then air brushed him with super-high quality lacquer base paints. I then spent several tedious hours repainting these "tattoos" (war markings) on his jet mode by hand, using images from the movie. Please check out the list of modifications and improvements made to this AWESOME Leader Class Starscream custom. Remember, all paints used in the process were lacquer and enamel, so the finish is very durable, and the colors will stay vibrant and true for many many years (keep in mind, this is a collectible, so don't throw it around!) I finished him off with several finishes of Testor's clear coats, matte, semi-gloss, and gloss variations to keep the colors vibrant and true for years and years ...always through an air brush to ensure thin, even perfect coats. I ensure the highest and most durable paint applications on all my customs. I exceed necessary preparation to these customs - Special plastic adhering primers, automotive grade lacquers and the best paints around to detail with. As always, I am accepting VERY LIMITED custom commissions and/or requests. Check out my website or contact me through ebay for details. 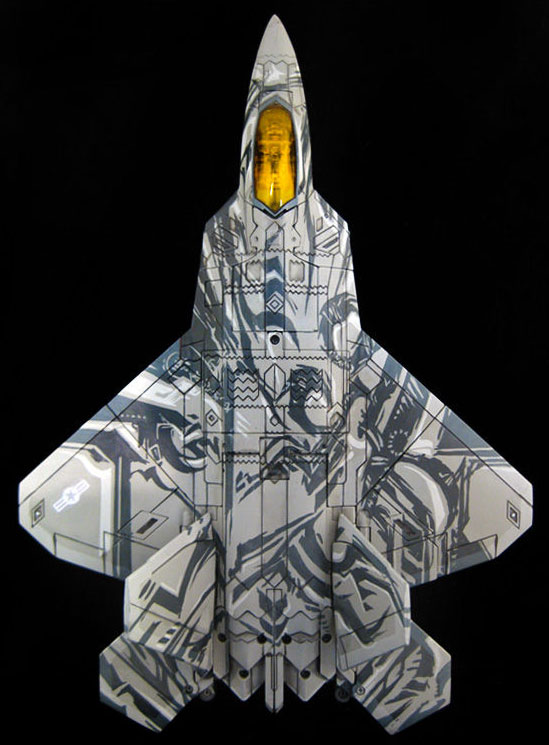 If you like to express yourself by making your own customs, please stop by and say hello in the Transtopia forums where you can share your kitbashes, customs, artwork and fan-fiction.

Check out this mixed Transformers lot from eBay seller rezzurekt ...

This auction is for a Transformers lot, including:

I'm not certain which figures are Armada/Energon/Cybertron, or if all the names are correct, but I did attempt accuracy. I didn't see any broken parts; missing parts I could identify are listed with the figure description. Figures were displayed in a non-smoking home. Descriptions are as complete as I was able to make them; the lot is sold as-is & will not be split to sell individual figures. 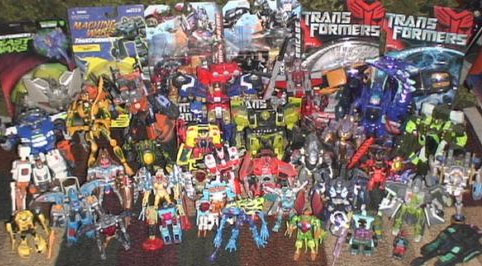 This auction from Seibertron.com is for a TRANSMETAL OPTIMUS PRIMAL from Beast Wars, which was released in 1997. This item was MISB until I opened it to do pictures for this auction. I noticed that this item had two pieces of tape on one end which caused me to be weary that it was not a MISB item. I carefully pulled back the tape so that I could verify the contents of this item. As you can see from the pictures in this auction, the item has never been used before, is in BEAUTIFUL perfect 100% complete condition, and was indeed sealed until I took these pictures. Better safe than sorry ... I just wanted to make sure that his weapons were in the package! The tape was placed back in its original position and still looks like the item is MISB.

View all of Seibertron.com's items here

Varia31 wrote:Ah yes, I remember seeing that custom Leader Starscream a few days ago, it is quite a sight. Very cool indeed.

Varia31 wrote:Ah yes, I remember seeing that custom Leader Starscream a few days ago, it is quite a sight. Very cool indeed.

I like JinSaotome's customs more but this leader SS does look nice..

Yes, Jin does awesome work as well. I also like Shinobitron's customs as well as EnclineDesign's. All four of them are amazing customizers, I doubt I could ever compete with them, even my custom Prime can't compare.