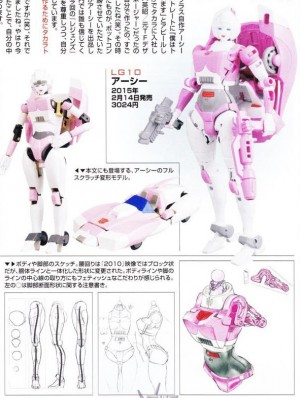 Fellow Seibertronian Powered Convoy has pointed us towards the scans of the latest issue of Japanese hobby magazine Figure King, recently obtained by fellow fan-site The AllSpark - featuring a lengthy interview with Generations/Legends Arcee designer Hironori Kobayashi (in Japanese, of course), and more images of Takara Tomy products like the QT line, D-style Megatron, PS One Optimus Prime and Amazon exclusive Age of Extinction Hound. Check out the mirrored images below!

robotmel wrote:;)
They are larger if you click on each pic!

Over on the TFW board member SydneyY is working on translating the interview with Takara Transformers designer Hironori Kobayashi which will hopfully be posted soon?
http://www.tfw2005.com/boards/transformers-news-rumors/1011115-figure-king-202-transformers-scans.html#post11858895

It's Amazon Japan DVD Exclusive. He's not yellow at all, so me thinks you need to tweak your monitor settings a bit.
Re: Figure King #202 Transformers Scans: D-Style Megatron, PS One Optimus, QT and Legends Arcee (1624602)
Posted by Sabrblade on November 25th, 2014 @ 3:24pm CST

It's Amazon Japan DVD Exclusive. He's not yellow at all, so me thinks you need to tweak your monitor settings a bit.

It's Amazon Japan DVD Exclusive. He's not yellow at all, so me thinks you need to tweak your monitor settings a bit.

Definitely looks yellow (or even cream) on my end, too.

Hironori Kobayashi on LG-10 Arcee
who is he? - Joined Takara in 1999. The first Transformer figure he developed was Speedbreaker from Car Robot (Sideburn from Robots in Disguise). Since then, he has worked on the products such as Binaltech and earlier Masterpiece figures as well as modifying overseas products for domestic market. He has returned to Masterpiece series with Ultra Magnus, which is to be released in December. Currently he is working on Masterpiece series and the new items "for the future".

- How did Arcee become a part of the "Legends" (Generations) lineup?
K: I recall she was picked as a matter of course. The characters that hadn't been featured before were chosen (for the series). The fembots were not thought to be a strong sell before, but it seems that Hasbro is willing to try new ideas since their staff went through a change of generation. As soon as I heard Arcee would be in the lineup, I insisted on taking on the job.

- Can you often nominate yourself for the figure you want to work on?
K: Usually our product development schedules are taken into consideration when new jobs are allocated, however in this case my request was granted because there was plenty of time until the development was to start.

- Which details of Legends Arcee do you recommend us to take notice?
K: I was very particular about re-creating her figure as seen in the cartoon. Hasbro prefers a change from the original in this kind of situation, and convincing them not to was the first difficulty I faced. Actually, her initial design was done with a view to remoulding it into Blurr, but that would have made the re-creation of the cartoon impossible. Hasbro accepts our suggestion as long as we have convincing reasons, so at the very early stage I asked Mr.Yuki Oshima to draw a sketch and showed it to them - "Doesn't she look cooler like this? Let's make this one". Also, I wanted her to be like a dramatised version of the character drawing from the cartoon, not a mere copy of it, and Mr.Oshima's drawing represented those exquisite lines. I think the lines of the hips are noteworthy. Her vehicle mode was decided as I had discussed it over with Mr.Oshima.

- The re-creation of the cartoon is indeed the ideal Arcee.
K: Yes. The fans would have been disappointed if the design was different even though it looked nice. I wanted to pursue what the staff of "2010" (G1 season 3) were aiming for.

- How are the paint applications different from the overseas version?
K: For the domestic version, the focus is on the cartoon. An extra nylon resin mould was produced to achieve the pale pink on the arms. To me, the Transformers "skin" tone is an important detail. The colour around her Cybertron (Autobot) faction symbol has been changed to silver as well, and it is based on the stickers from the era the cartoon was aired. The overseas version has black nylon resin parts and looks firm overall, and Hasbro's decision is fine as well in order to make the product stand out.

- You have been known as an Arcee fan.
K: Not Arcee in particular, but I am rather a fan of "the Movie" and "2010". Though from a toy fan's point of view, only Arcee was missing when the toys were lined up. Neutral colours were used for the cast of the movie/show, and they were all different. So when colours such as green, purple and red are lined up, the hues appear ill-balanced without pink. Their colourfulness becomes complimentary only when Arcee is added to the mix.

- In the show, her vehicle mode and robot mode are quite unlike each other.
K: Even among the fans, I think people who were familiar with the morphing transformations of the 70's (cartoons) just accepted that Arcee wouldn't actually transform. But I'm part of the generation that grew up with the toys which could transform and combine like we saw on TV, and I was convinced she too could transform.

- Arcee has been special for you since you joined the company.
K: As I was unhappy there was no three dimensional Arcee, I made the first scratch-built model for the job interview at Takara. The applicants for the design section are expected to bring some project they worked on at school and such, and I showed my Arcee on top of that to make a straightforward appeal that I was capable of developing Transformers. That was how I joined Takara. The interviewer was Yoke (Hideaki Yoke, former general manager of TF design team), and his reaction was something like, "Oh, you made this yourself? Good for you." (*laugh) I modified the Arcee model to submit to Botcon Japan '98 and won the first prize. Though no one at work believes me that I entered the Arcee and won. (*laugh) This Legends version has kept the basic structure of the Arcee model with improvements I thought needed.

- Indeed it seems you joined Takara to create Arcee.
K: That is not the whole reason (*laugh), but it took me 15 years. It is true that I feel as if I have reached the end of one chapter.

- I hope we'll see the Headmasters version from the Rebirth...
K: I would love to challenge that one as Version 2. (*laugh) I think there might be an opportunity in the future now that her main form is realised.

- What is your goal for the next 15 years?
K: As a "2010" fan, I hope Sharktrons (Sharkticons) and other mechanical beasts will be featured. Also, I'd like to have Cha (Kup) that transforms to the futuristic car as seen in "2010". While working on Arcee I re-discovered the designs of those days have really nice lines. With appreciations for those designs, I want to give it a go at creating Cha as a cool futuristic pick-up truck and other casts in "2010" style.

Touché! However, 'tis the season to save money to spoil my nephew rotten. Gotta be a little more conservative with purchases for my collection right now.
Re: Figure King #202 Transformers Scans: D-Style Megatron, PS One Optimus, QT and Legends Arcee (1624779)
Posted by Robogeek1973 on November 26th, 2014 @ 6:03am CST
Legends Arcee looks so much better than her Generations counterpart it isn't even funny.
Click here to view additional comments about this topic at the Energon Pub Forums ...