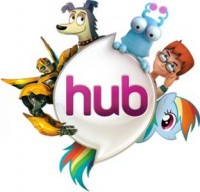 The countdown has begun! We are now 10 days out from 10.10.10, and The HUB has updated their website by posting their initial TV schedule. Which reveals the first five days of programming. Unfortunately, Transformers: Prime is not on said schedule.(Boo!) However Transformers: Generation 1 is, and will begin airing October 12th.(Yay!) Hopefully Transformers: Prime won't be too far behind, but we can all at least enjoy some old-school G1 awesomeness in the meantime.


-Seibertron.com your planet, your news.

While neither Transformers or Joe are up yet, a lot of their other stuff is, and MAN do they have some wacky crap.
Re: First 5 days of HUB programming online (1131012)
Posted by Galvatron X on October 2nd, 2010 @ 8:02pm CDT
I'm hoping the "Garfield" they're listing is the old one with U.S. Acres. I loved that show!