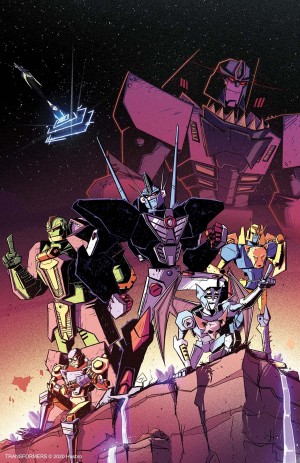 Greetings Seibertronians! Fans of Beast Wars need to take note of this, as IDW have given us our first look at their forthcoming Transformers Beast Wars comic! Special thanks to fellow Seibertron user, Sabrblade, for spreading the news in the forums.

The series will be written by Erik Burnham (of Transformers/Ghostbusters and IDWs own Ghostbusters series) with Josh Burcham (IDW Transformers ongoing, Galaxies and the three Wreckers books, and a lot more) on art duties. The series is set to arrive in February 2021 with issue #1. From the looks of it the core Maximal team is set to include Optimus Primal, Rhinox, Cheetor, Rattrap and a new character that looks to have a bat alt mode called Nyx. While on the Predacon side we only see Megatron so far.

There will be four variant covers at launch, three of which you can see below: 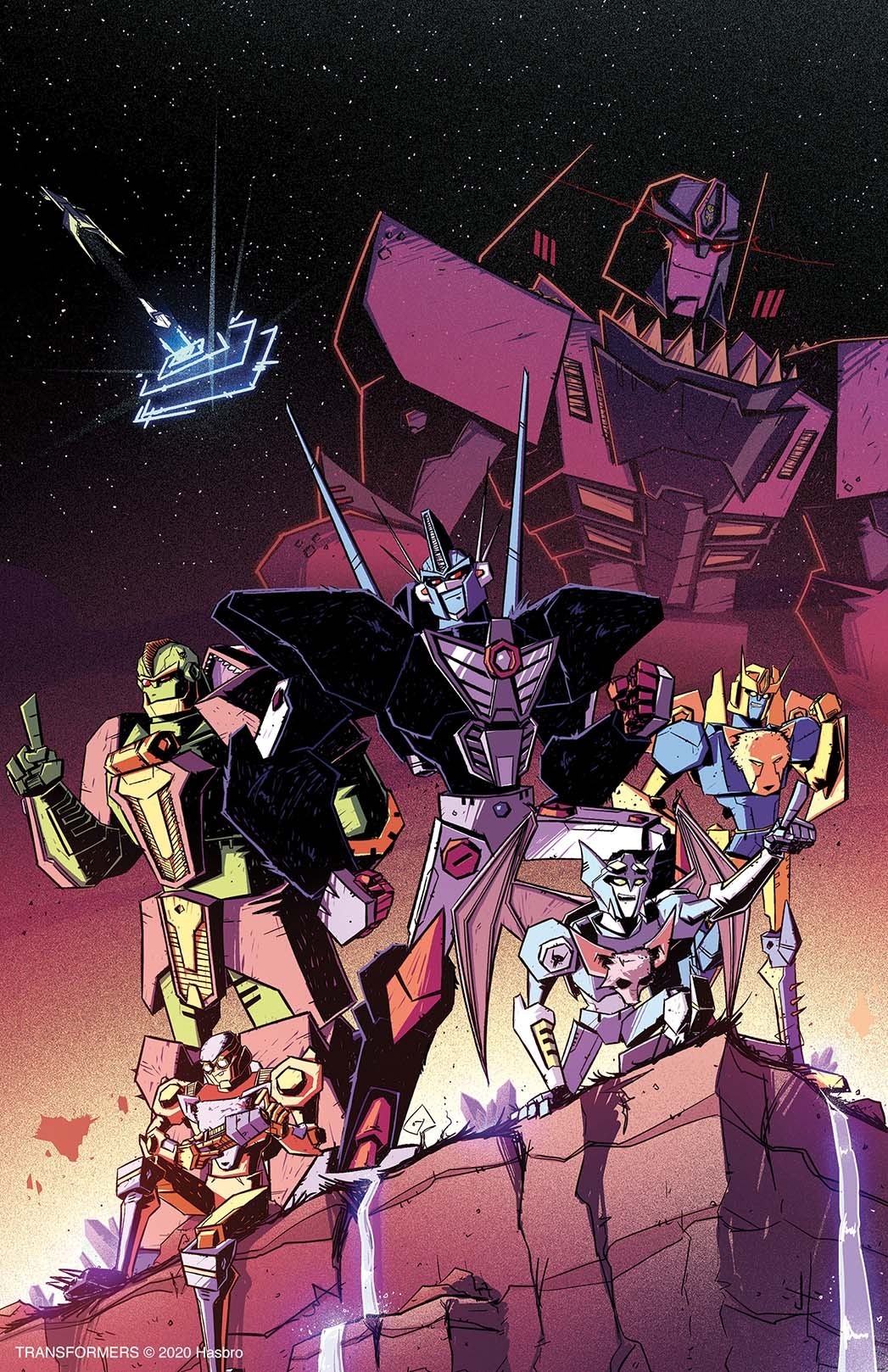 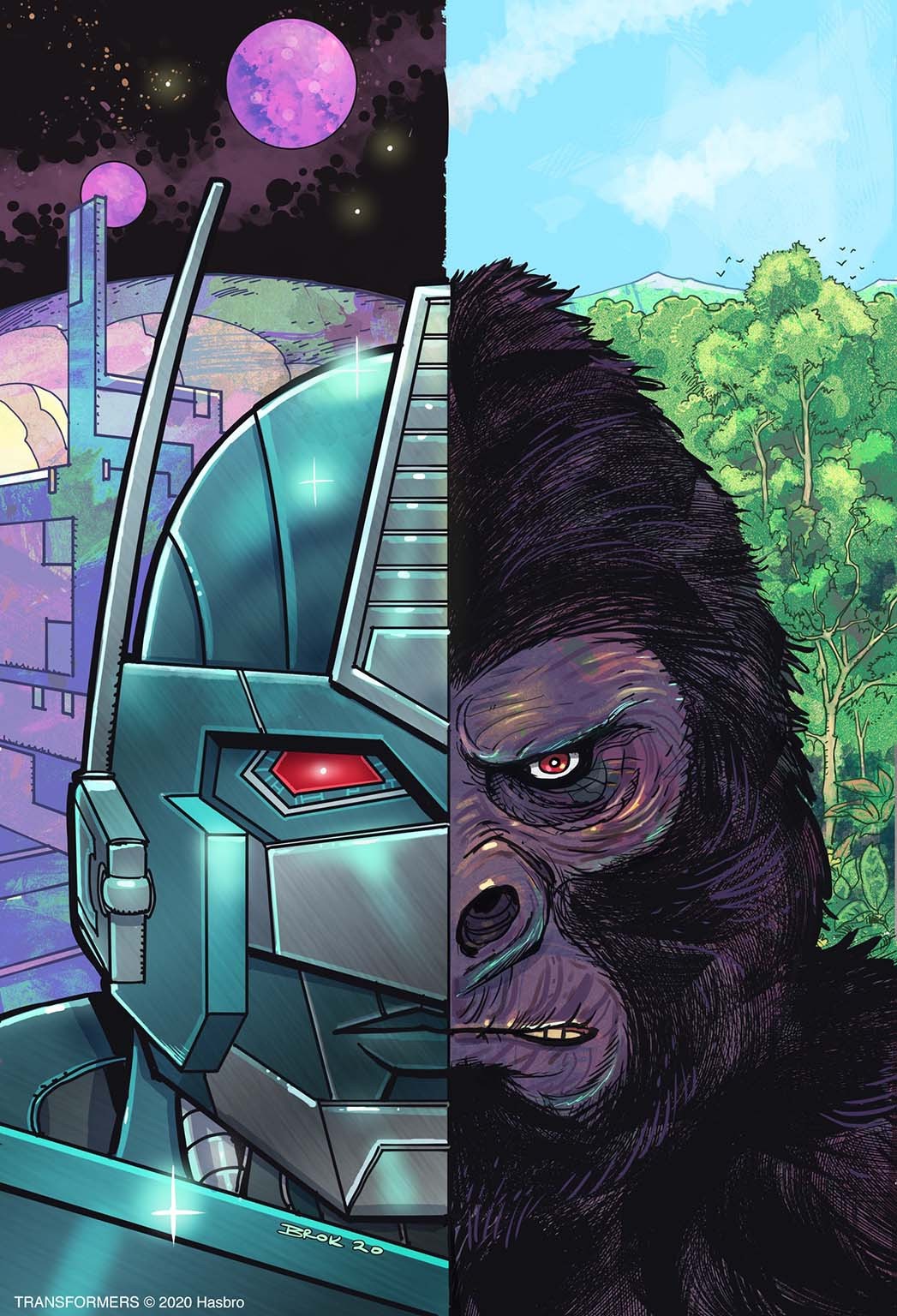 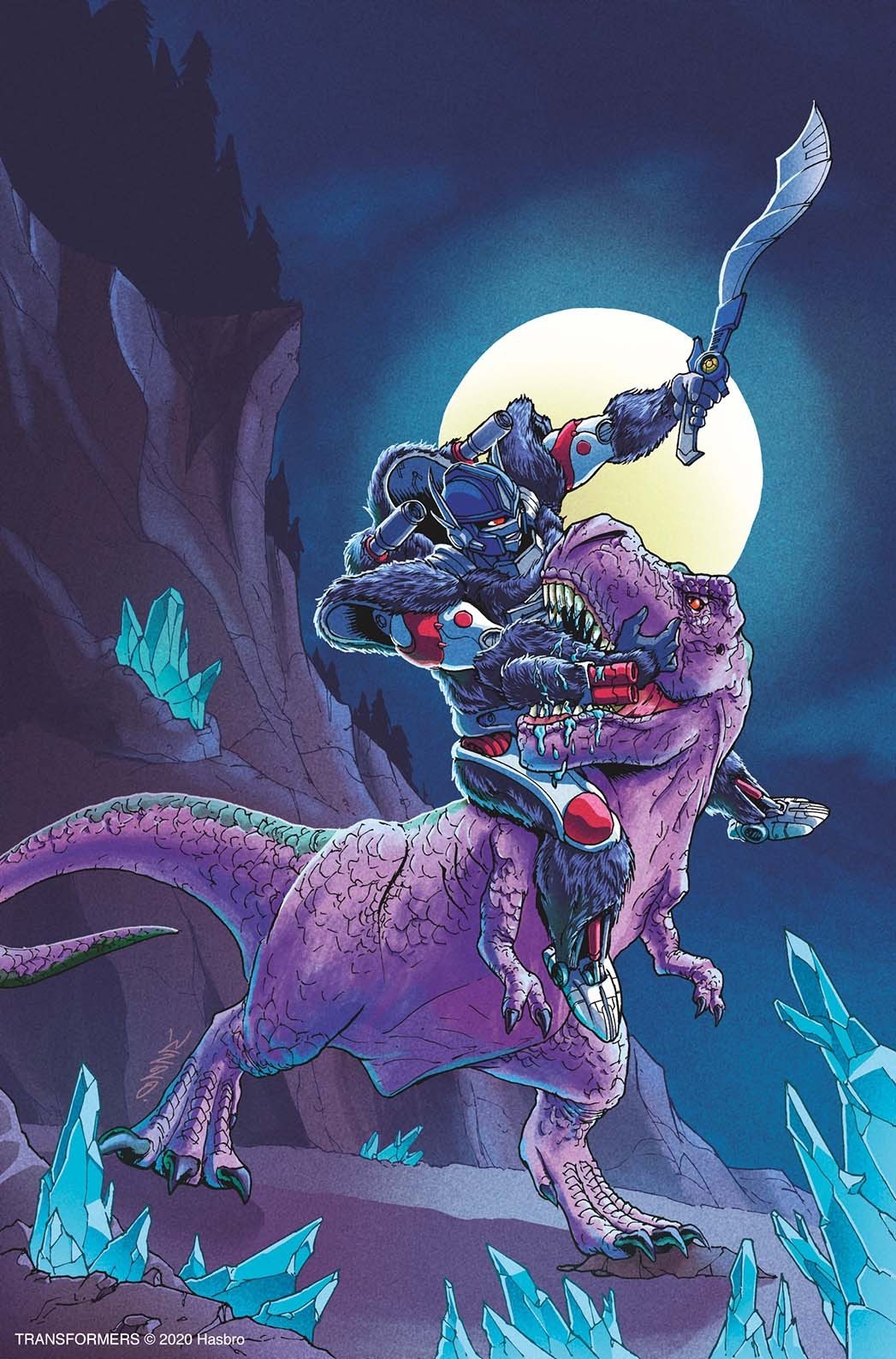 Here is the press release in full:

Written by Erik Burnham (Transformers/Ghostbusters) with art by longtime Transformers artist Josh Burcham (whose credits include IDW’s ongoing series, Galaxies, the Wreckers saga, and much, much more), the new series will launch in February with a #1 issue containing 30 pages of story and bonus content.

The Transformers: Beast Wars comic series will welcome fans to a future Cybertron populated by scientific-minded Maximals and action-oriented Predacons. When the successor to the Megatron name steals a golden disk and a ship capable of traveling through time, only Optimus Primal and a team of Maximals — Rattrap, Rhinox, Cheetor, and a new character Nyx — can stop them.

“Beast Wars was a wonderful and weird pivot from the Transformers setup to which I was first introduced. Big personalities, unexpected twists, and actual stakes all popped up regularly on the show, and those are tools that I enjoy using to build new stories,” says Burnham. “Best of all, the enthusiasm from everyone involved in this project has been so high that I'm feeling constantly inspired!”

“I'm so thrilled to be a part of this team,” says Burcham. “I was a ‘90s kid and even though I knew about Generation 1, Beast Wars was really my G1. It's still my favorite iteration, and I consider it such a privilege to be able to bring the characters to life in this brand new series. Let the Beast Wars rage on!"

“Beast Wars is a beloved part of the Transformers legacy,” says editor David Mariotte. “That’s why we couldn’t pass up launching a new series in tandem with the 25th anniversary! Erik and Josh are going to take everything that’s beloved about Beast Wars — the characterization, the drama, the jokes — and start fresh with a series that will feel at home for fans of 25 years and first-timers alike.”

For information on how to acquire copies of Transformers comic books, please contact your local comic shop or visit http://www.comicshoplocator.com to find a store near you.

About Hasbro
Hasbro (NASDAQ: HAS) is a global play and entertainment company committed to Creating the World's Best Play and Entertainment Experiences. From toys, games and consumer products to television, movies, digital gaming, live action, music, and virtual reality experiences, Hasbro connects to global audiences by bringing to life great innovations, stories and brands across established and inventive platforms. Hasbro’s iconic brands include NERF, MAGIC: THE GATHERING, MY LITTLE PONY, TRANSFORMERS, PLAY-DOH, MONOPOLY, BABY ALIVE, POWER RANGERS, PEPPA PIG and PJ MASKS, as well as premier partner brands. Through its global entertainment studio, eOne, Hasbro is building its brands globally through great storytelling and content on all screens. Hasbro is committed to making the world a better place for all children and all families through corporate social responsibility and philanthropy. Hasbro ranked among the 2020 100 Best Corporate Citizens by 3BL Media and has been named one of the World’s Most Ethical Companies® by Ethisphere Institute for the past nine years. We routinely share important business and brand updates on our Investor Relations website, Newsroom and social channels (@Hasbro on Twitter and Instagram.)

What do you think of this news? Will you be getting this series? Will this be your first time with the cast of Beast Wars? Let us know in the Energon Pub and stay tuned to Seibertron for all the latest news and reviews!

Pretty sure from the Maximal interactions in the pilot, the flight of the Axalon was more or less their first time meeting?

As clearly we can't do anything with Beast Wars that isn't a prequel or "new spin"/retcon/cashing in on brand recognition... 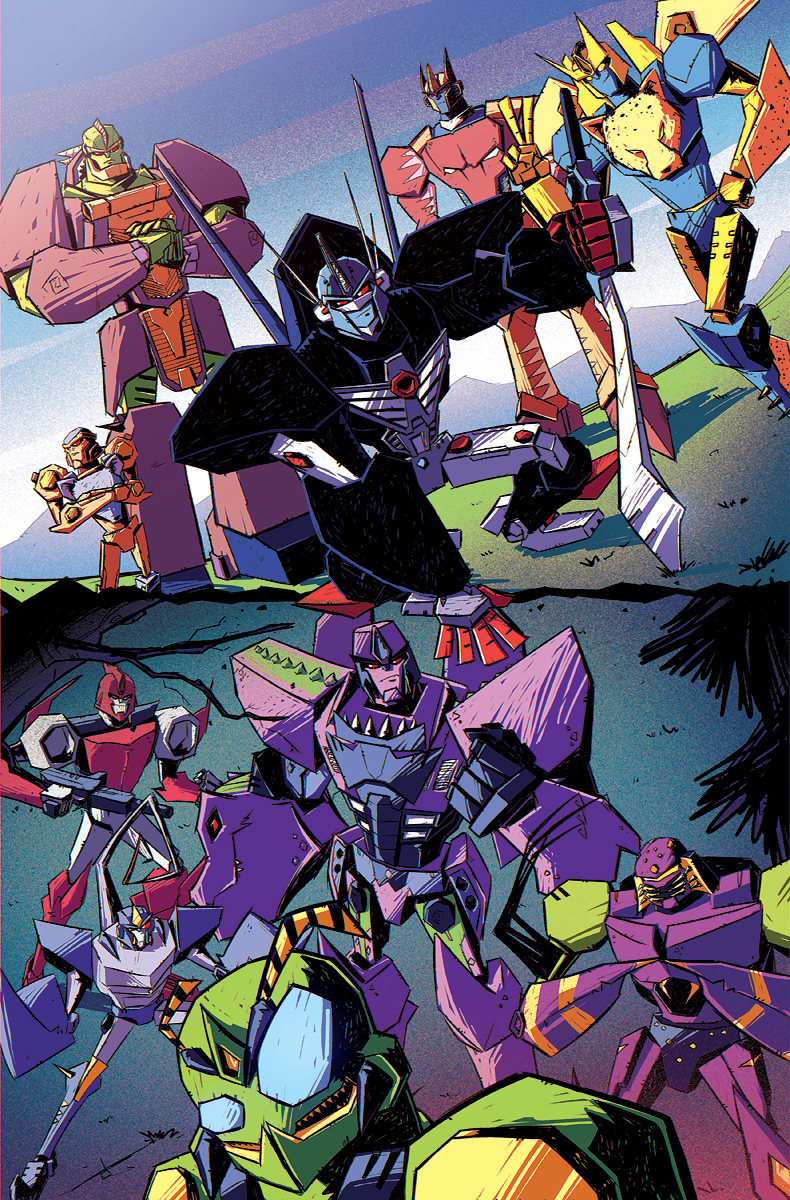 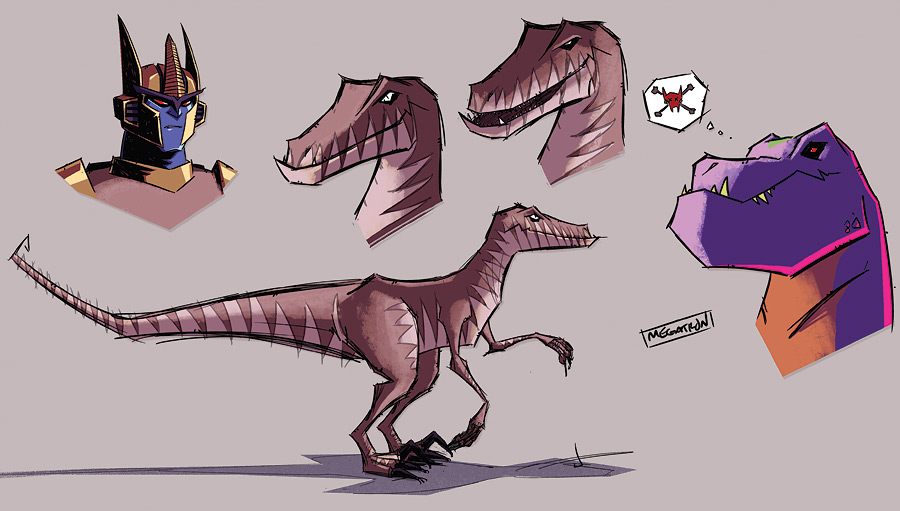 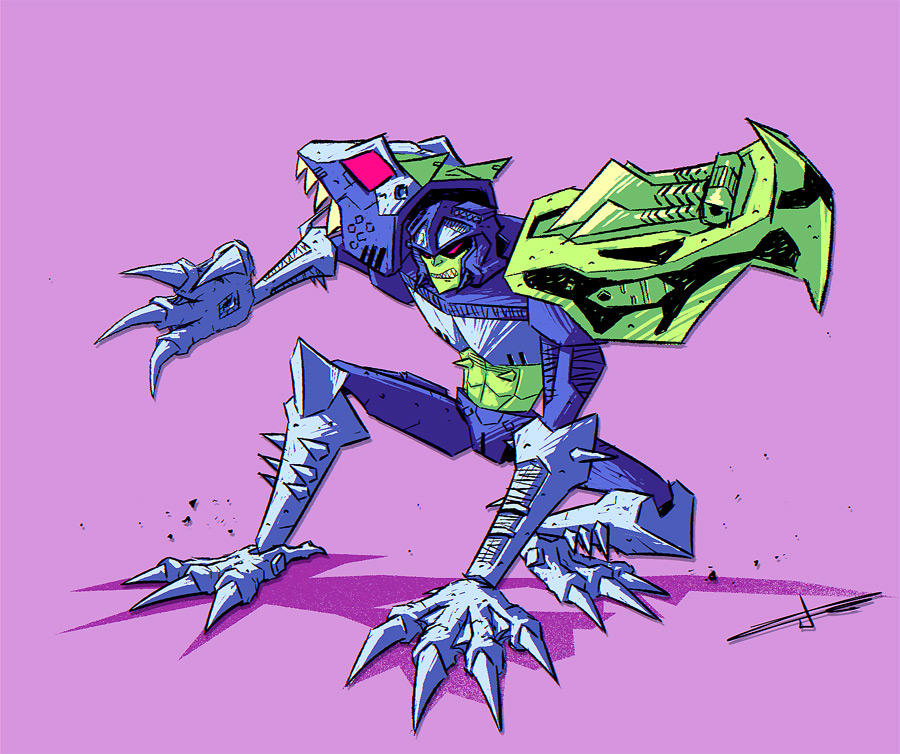 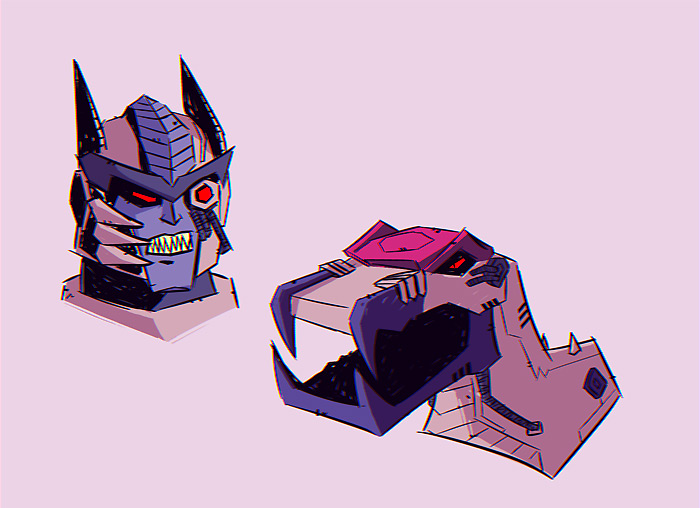 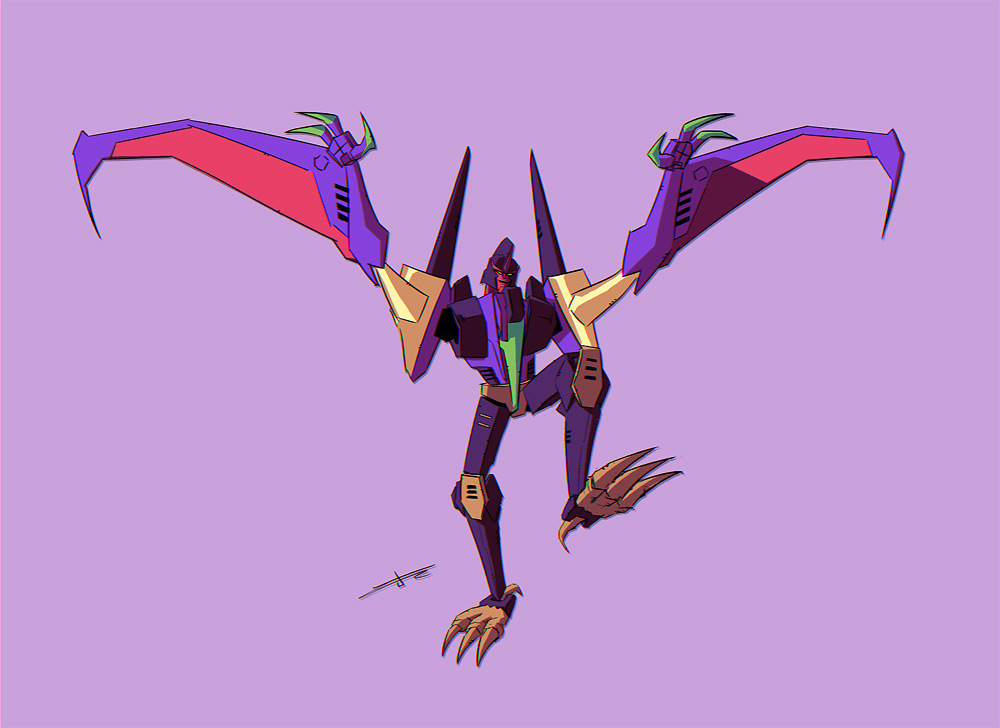 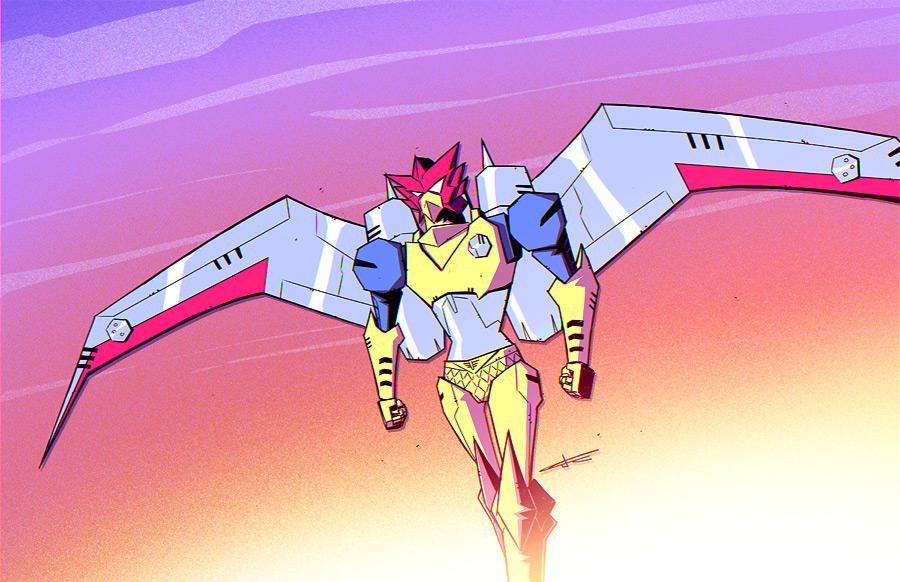 AllNewSuperRobot wrote:25th anniversary? Has it really been that long since Hasbro actually did something brand new with Transformers???

Rescue bots is not that old and it's still going.

Also I am sure many would argue that the movies are their own thing too (I sure think that way).
Re: First Look At IDW’S Brand New Beast Wars Comic Series (2083314)
Posted by Sabrblade on October 9th, 2020 @ 5:28pm CDT
More from Erik Burnham:

We're doing something a little bit like what was done way back when with Ultimate Comics; starting from a familiar place with some beats that longtime fans will recognize, but from there we can go almost anywhere.

Can't wait to show you some of the craziness we have planned.

Re: First Look At IDW’S Brand New Beast Wars Comic Series (2083320)
Posted by Bumblevivisector on October 9th, 2020 @ 7:13pm CDT
I wasn't expecting the 'if Geoff Senior drew Animated' aesthetic, but that brings up fond memories of both TFA and that final Reaching the Omega Point comic from BotCon 2000, so I couldn't be more pleased.

I've fallen waaaaaaay behind on every stretch of IDW, but I'll definitely pick up every issue of this on sight!
Re: First Look At IDW’S Brand New Beast Wars Comic Series (2083323)
Posted by o.supreme on October 9th, 2020 @ 7:44pm CDT
As much as I disliked IDW overall, with few exceptions, I actually liked the BW Gathering/Ascending series. It showed you could do something new with those characters, and not worry about having to "mess up" the original series. I'm hoping all that we've seen so far is just specialized cover art, because it all looks horrible IMHO. Hopefully they can tell an interesting story.

Rodimus Prime wrote:Well the art is underwhelming for sure. I never cared for Senior's style so I hope this is the length of his involvement. If Burcham draws in similar style, I'll be hard pressed to get into this. If the story is really good, I could get past it. But as it is, I gotta Randy Jackson this one.

I wish I could be that optimistic.

Literally most of the buzzwords used have irked me, in fact. My immediate thought was Teen Titans GO!, Thundercats ROAR! etc Completely tone deaf bastardisations. Nothing more than milking license recognition.
A more apt TF comparison that came to mind was the Japanese dub on the Mainframe Beast Wars.
That is not a positive comparison to have, either.

Already "adding" a Bat Fembot needlessly brings to make all those "new" identical generic token characters, that flooded the tail end of IDWverse. Beast Wars has several Fembots, ready to go. Scores of unused characters too. But of course this is just about capitalising on the anniversary.
Re: First Look At IDW’S Brand New Beast Wars Comic Series (2083377)
Posted by Sabrblade on October 10th, 2020 @ 9:11am CDT

Rodimus Prime wrote:Well the art is underwhelming for sure. I never cared for Senior's style so I hope this is the length of his involvement.

Rodimus Prime wrote:Well the art is underwhelming for sure. I never cared for Senior's style so I hope this is the length of his involvement.

Senior? Geoff Senior has nothing to do with this series.

The art bares a strong influence.
Re: First Look At IDW’S Brand New Beast Wars Comic Series (2083390)
Posted by bluecatcinema on October 10th, 2020 @ 1:34pm CDT
Now this is interesting. Funny how they introduced a new character who turns into a bat, when they already had Nightscream in the canon.
Click here to view additional comments about this topic at the Energon Pub Forums ...