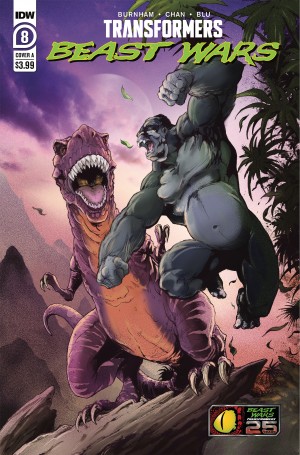 Be ready to get out of stasis lock tomorrow when Transformers: Beast Wars #8 arrives from IDW Publishing. Those familiar with the Beast Wars story know what to expect for awhile, and that's a fight over the orbiting stasis pods safeguarding Maximal protoforms. Whether this new iteration will stay on this story beat for as long as the cartoon did is yet to be seen, but based on this preview and the synopsis just below, it looks like at least this next issue will look to that as its focus.

(W) Erik Burnham (A) Winston Chan (CA) Andrew Griffith
"Pod," part two! Blackarachnia has made her way to the Maximal ship, the Axalon, and encountered her first Maximal, Cheetor. Now she's gone missing again and it's up to the whole crew to find the mysteriously disappearing spider... before she finds them!

Check out the preview below and be sure to pick this issue up tomorrow at your local comic shop, through a licensed digital comics retailer, or via the Seibertron.com eBay store. 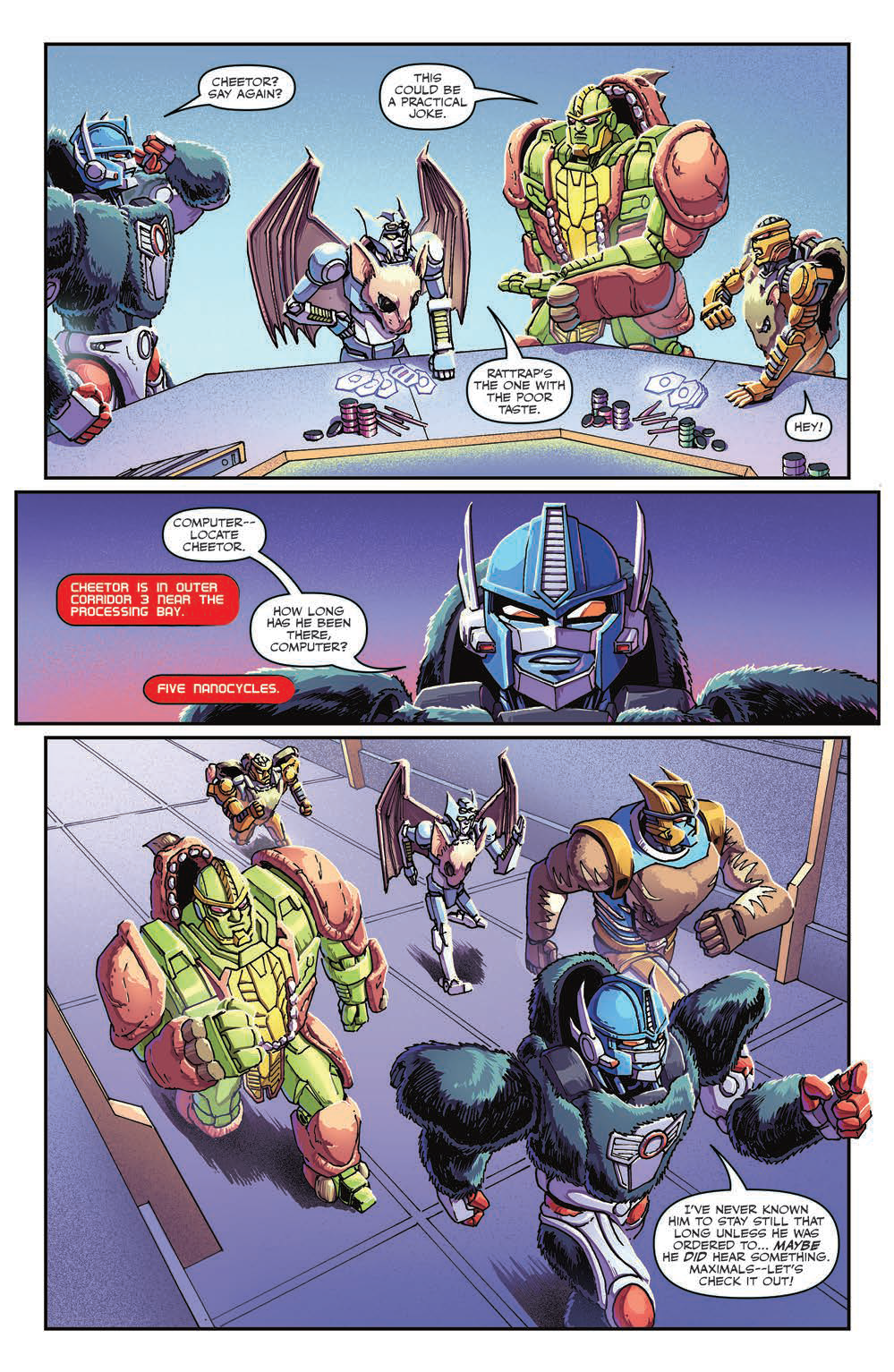 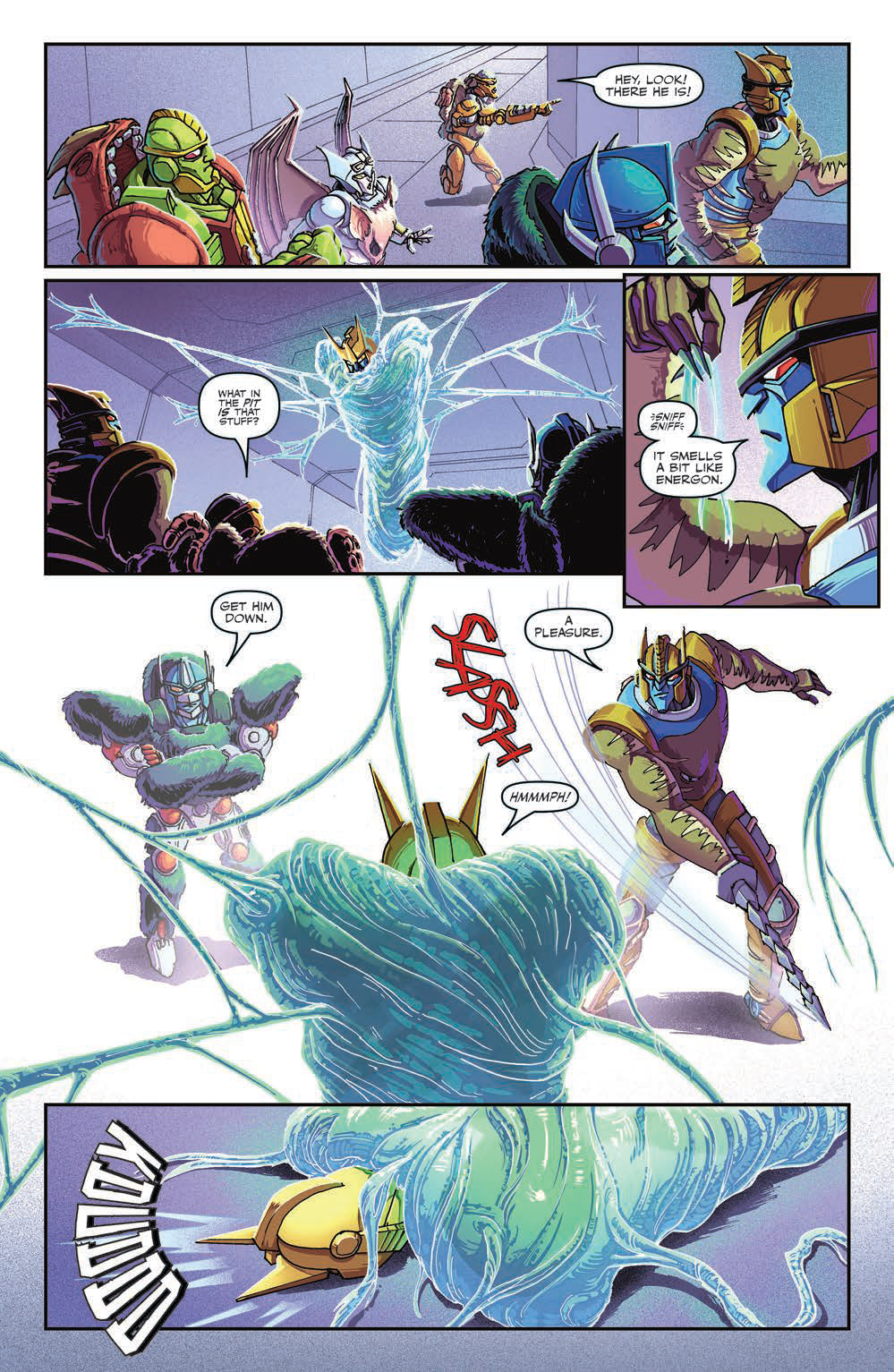 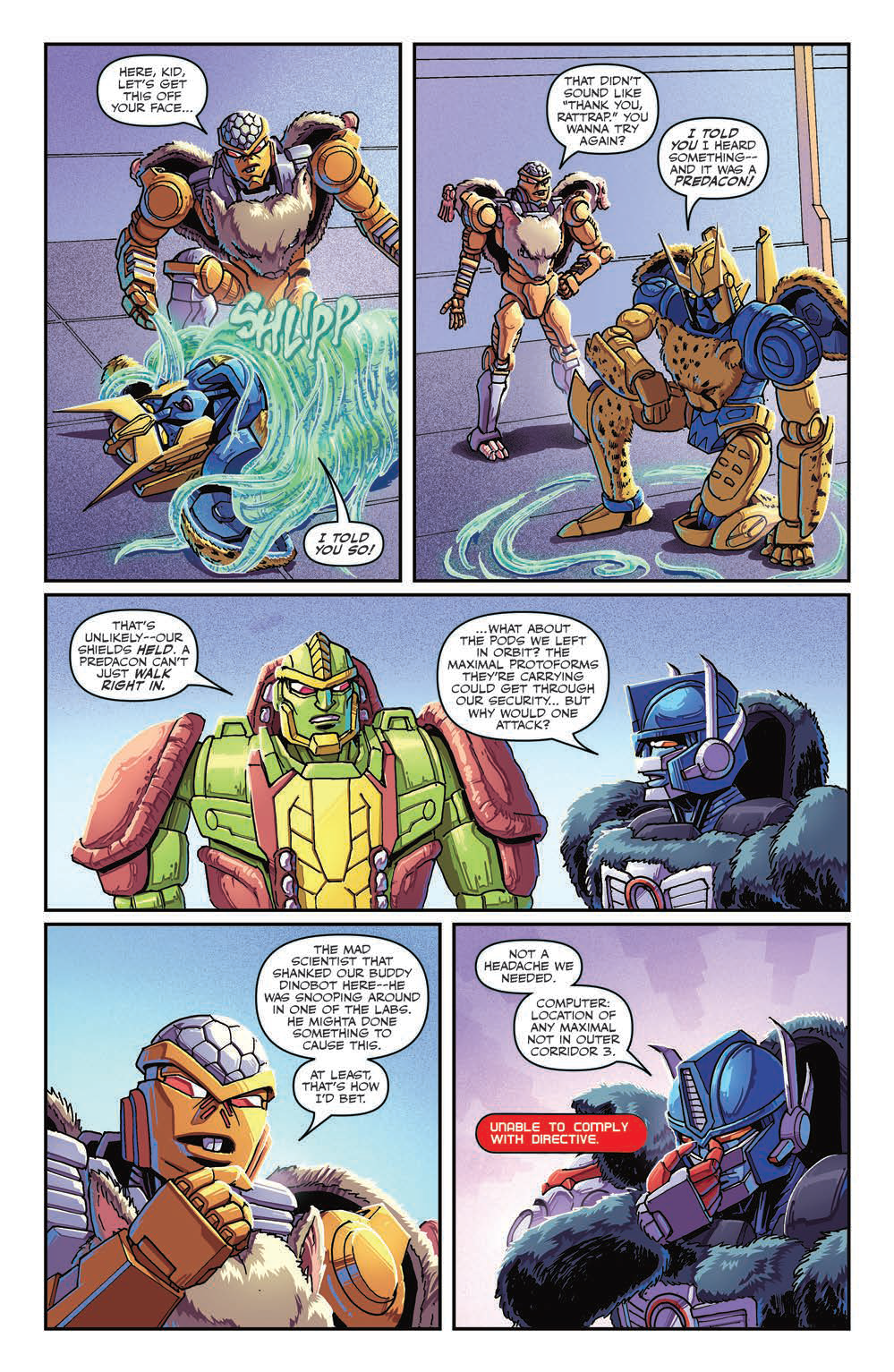 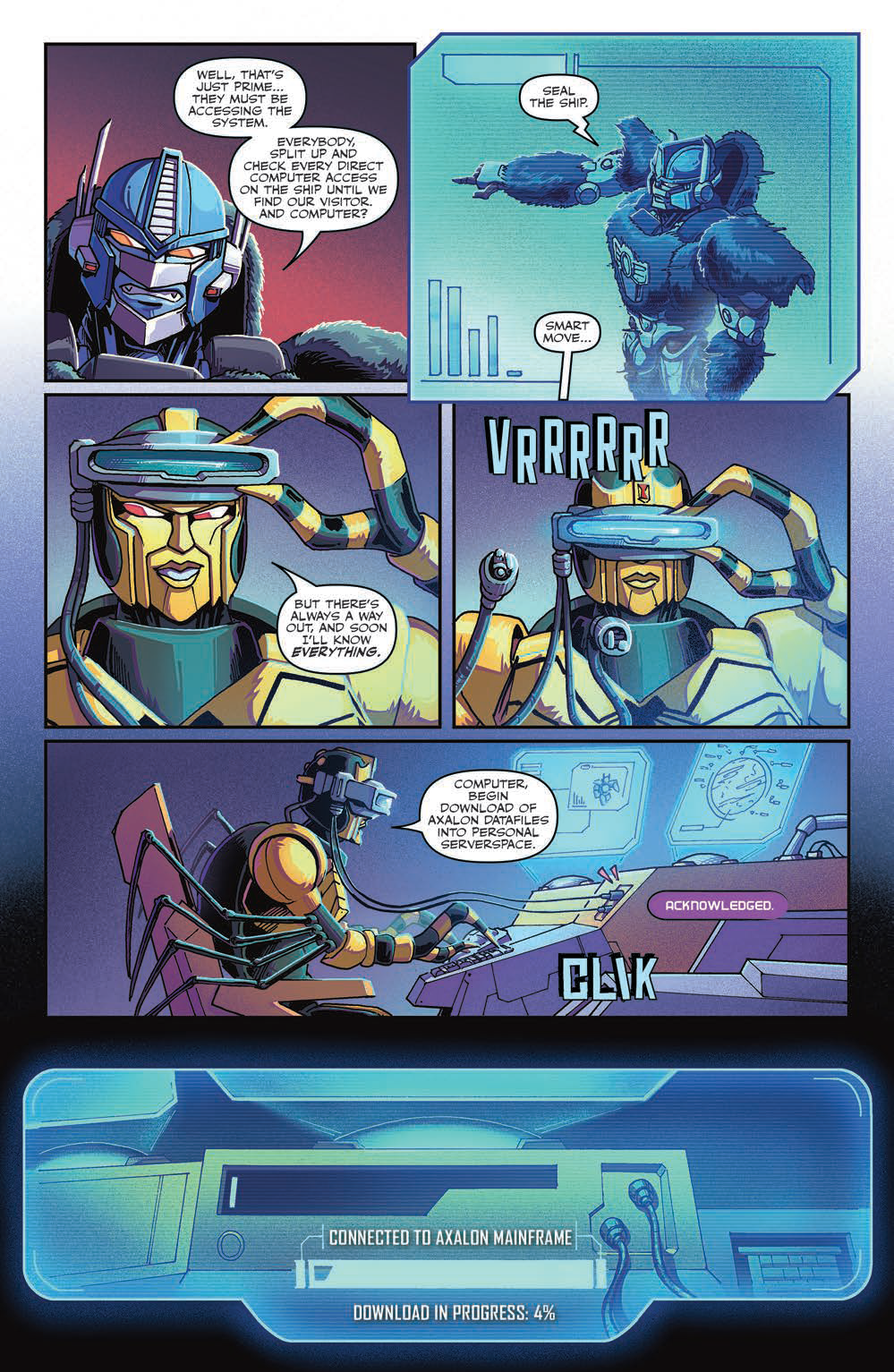 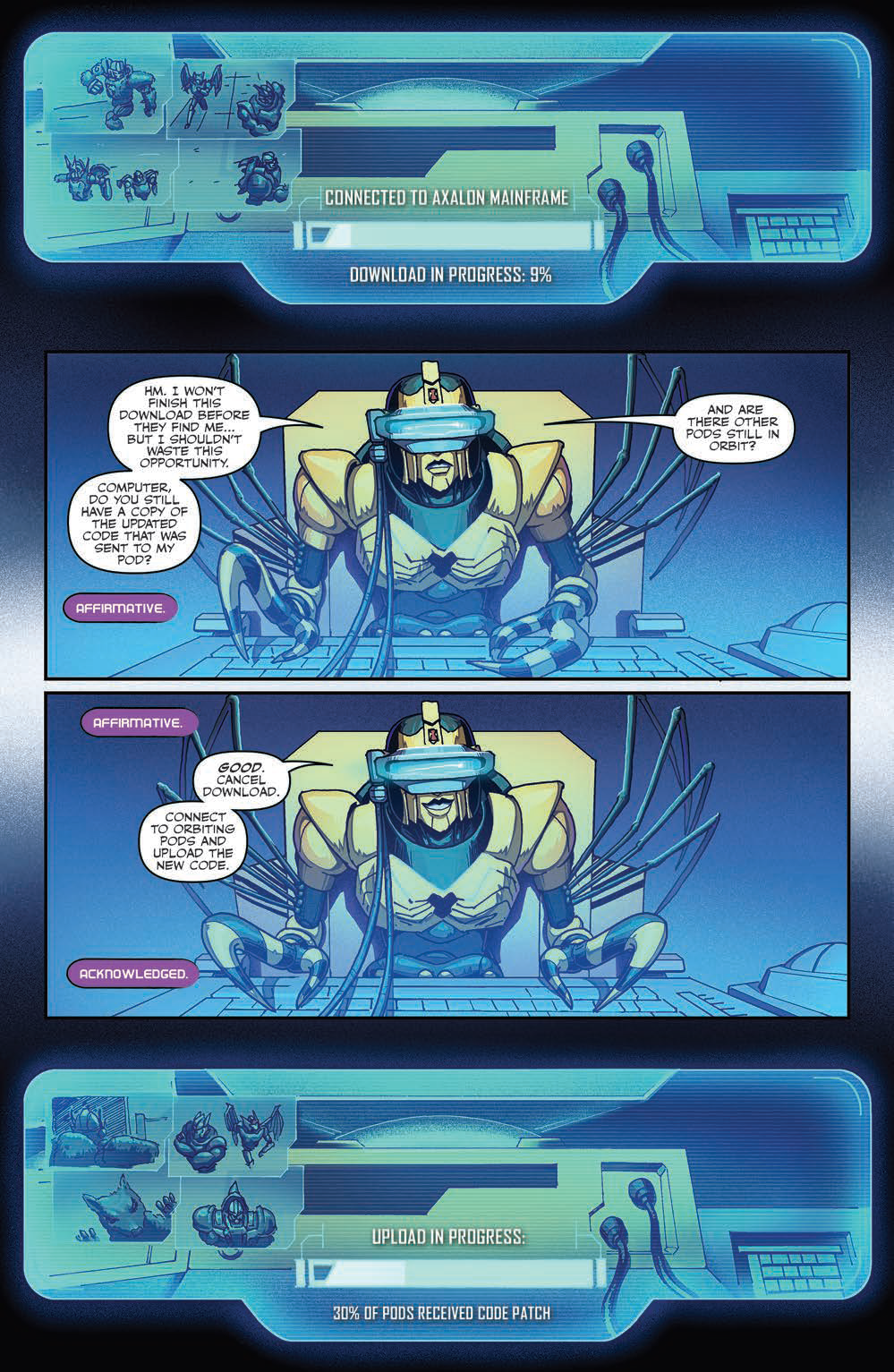 AllNewSuperRobot wrote:It would be very disappointing if that throwaway bit of dialogue from Rattrap is the explanation for Blackarachnia's behaviour.

On the plus side, hopefully some (more than one) new and different characters coming soon.

But we saw Tarantulas do exactly what Rattrap said when he infiltrated the Axalon in Issue 6. And last issue blatantly showed his shell program partially uploaded to Blackarachnia's pod as it landed. What's not to get?
Re: Five Page Preview of IDW Beast Wars #8 (2116310)
Posted by AllNewSuperRobot on September 21st, 2021 @ 10:52am CDT
As I said, after reading the last issue, Burnham doesn't get how Stasis Pods work. For one thing, how they can't leave orbit on their own.
So it would have been better to do something different with BA. Framing it in such a way, that she thinks she is John McClane on an enemy ship. The enemy faction, to her, being unclear.

They have been trying to set this up as an alternative Beast Wars, not the show. So instead of poorly abridging things the show already did. Go wild and different.
Re: Five Page Preview of IDW Beast Wars #8 (2116315)
Posted by MaximalNui on September 21st, 2021 @ 11:10am CDT

AllNewSuperRobot wrote:As I said, after reading the last issue, Burnham doesn't get how Stasis Pods work. For one thing, how they can't leave orbit on their own.
So it would have been better to do something different with BA. Framing it in such a way, that she thinks she is John McClane on an enemy ship. The enemy faction, to her, being unclear.

They have been trying to set this up as an alternative Beast Wars, not the show. So instead of poorly abridging things the show already did. Go wild and different.

Wait, so you want them to try and do their own thing instead of trying to follow the original story... but when they don't translate one element from the cartoon 100% and instead set their own rules (how the stasis pods work), you complain about them not following how it worked in the original story?

The title of Beast Wars #8 is "Pod Part 02", as in the second part of a longer story just called "Pod". In my review of issue 7, I took issue with the book's pacing, and the same issues linger here. It's not terribly slow, but things don't pick up quickly with this most recent release either. As the last mention of this for most of the remainder of this particular review, I'll let Blackarachnia share a word for you if you had expectations that this latest installment would avoid the "writing for the trade" pace the series has been taking - 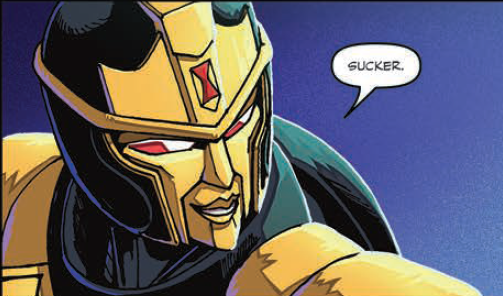 Blackarachnia: Still Mean
Writer Eric Burnham does well in this issue at making the events that do happen feel engaging. Even with an idea in mind on roughly what will happen (unless you're new to Beast Wars entirely) there's a sense of tension and plenty of character-appropriate dialogue, resulting in a final product that was very easy to get absorbed in. Outside of Nyx who is pure background decoration in this issue, Burnham shows that he knows who these characters are effectively communicates some of their traits as the story moves along. 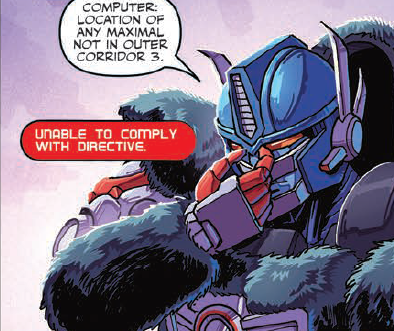 "It don't matter. None of this matters."
Without going into spoiler territory, it can be pointed out that while this issue (and presumably this story arc as a whole) is repeating the beat from the show's plot about recovering Maximal Protoforms from orbit, there's enough difference here to be encouraged by what may be yet to come. Put another way, while you may still generally know from point A on page 1 to point B on page 20 that point B was always the destination, there's some road construction on the way with enticing potential for the future. 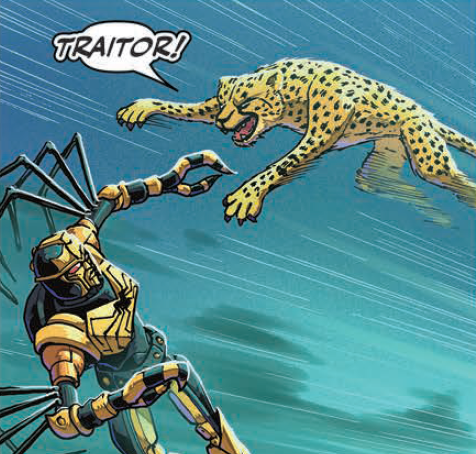 Cats: Also Still Mean
The artistic team on issue 8 is the same from 7, meaning Winston Chan's on the lineart again with colors by SidVenBlu and letters by Jake M. Wood. There's a lot to like here, with fun action scenes and a regular helping of close-up character portrayals during the scenes of just dialogue. There's a particular instance where Cheetor's running through the Axalon in cheetah mode and the panel layout has him overlapping multiple panels to express a sense of speed, which was very enjoyable and clever, at least to me. There were some instances again when I thought Chan's expressions went a bit stiff or where some characters' poses looked unnatural that prevent a full helping of solid praise for the art, but in general it's well executed here and still feels consistent with the rest of the series so far.

Cover options include Andrew Griffith's take on Optimus Primal and Megatron duking it out, Martin Gee's Blackarachnia cover which is used for this review's news story's thumbnail, as well as a 10-copy retailer incentive cover featuring both spider Predacons by Ryan Miller. As always, you can find all the cover images and full credits for the issue through our Vector Sigma Database page for Beast Wars #8. 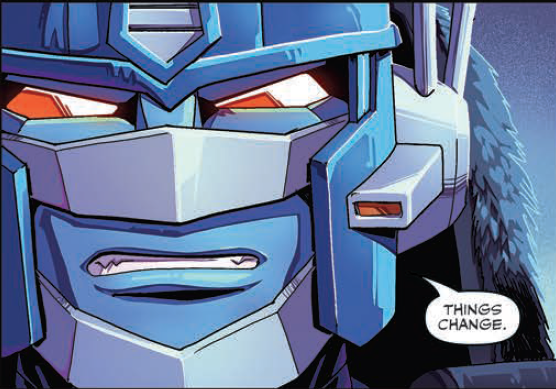 Slowly, in this case, but sure
Beast Wars #8 was more fun to read than I expected, with just enough beneath the surface layer of plot to make things compelling despite a general overall expectation of events that went mostly fulfilled. The character development is proceeding smartly in most cases and while the art's not by any means perfect this time around it conveys the story effectively while still providing a standout moment or two. I'm excited to see where things develop, but please, please start getting us there quicker.

I really wanted to go up to a 4/5 this time, which is "very good" on my scale, but the pacing just won't allow me to go above the "good" below.

Look out for this issue today, September 22nd, where you can pick it up at the Seibertron.com eBay store or at your local shop, check here to find the closest shop to you.
Re: Five Page Preview of IDW Beast Wars #8 (2116477)
Posted by Sabrblade on September 22nd, 2021 @ 3:55pm CDT

It didn't "leave orbit on its own". It started falling because it had received part of the invasive code Tarantulas sent to it, which contained a command for the pod's onboard computer to activate its thrusters and send it down to the planet's surface.

The pods' computers in the cartoon were essentially in sleep mode while in orbit and didn't activate until after the crash-landings. Here, their onboard computers can be accessed with a long-range signal from the ground, a technology the cartoon characters didn't have.
Re: Five Page Preview of IDW Beast Wars #8 (2116516)
Posted by Nexus Knight on September 22nd, 2021 @ 8:09pm CDT

Whatever gave you that impression? Just coz we never saw them land on their own in the show, doesn't mean that it isn't possible. It seems to make perfect sense, actually, that the pods have both remote control and thrusters. Since the Axalon had to eject, it is presumable that this is a safety feature designed into the pods for the purpose it was used. Quickly get rid of the pods to keep them safe, they would need not only the ability to track and report on the status of the pod and the protoform within, but make it easy to retrieve. Giving the pods the ability to maneuver on their own makes perfect sense, thus a few commands to the computer's onboard computer to fire thrusters could very wasily send it into the planet's atmosphere.
Re: Five Page Preview of IDW Beast Wars #8 (2116541)
Posted by william-james88 on September 23rd, 2021 @ 12:21am CDT
I prefer Burcham's art.
Also, not a fan of Burcham's art.
Re: Five Page Preview of IDW Beast Wars #8 (2116570)
Posted by AllNewSuperRobot on September 23rd, 2021 @ 9:21am CDT

I think it would be interesting to get a bit of artist rotation going in this book. A different one each arc. If these are being "written for trade", then give each trade it's own visual identity.