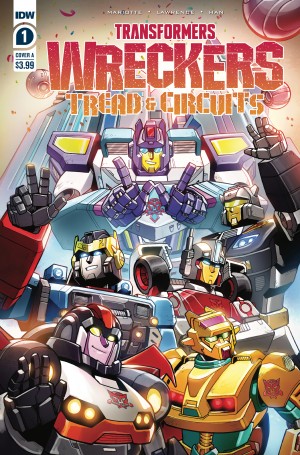 The second of two previews of new Transformers comic books for this week is for the new Wreckers themed mini-series' first issue, Transformers: Wreckers - Tread & Circuits #1. IDW Publishing has provided a five page preview of this upcoming issue which features regular editor David Mariotte on writing duties, with lineart by familiar Transformers artist Jack Lawrence and colors by Candice Han. Consider when looking over this preview that there may be more going on here than meets the eye, or just wait and find out what that might be when this issue is released tomorrow.

(W) David Mariotte (A/CA) Jack Lawrence
Out in the Cybertronian colonies, good entertainment is hard to find. Fortunately, there's always the Wreckers-brave Cybertronians broadcasting death-defying stunts and action-all as a cover for undercover operations! When the only event bigger than a new Wreckers broadcast, the Speedia 500, a race for governmental control of a whole world, is threatened, the Wreckers have a new mission: Save the most viewed race in the galaxy... without getting caught. Wreck & Rule!

Check out the preview below and be sure to pick this issue up tomorrow at your local comic shop, through a licensed digital comics retailer, or via the Seibertron.com eBay store. 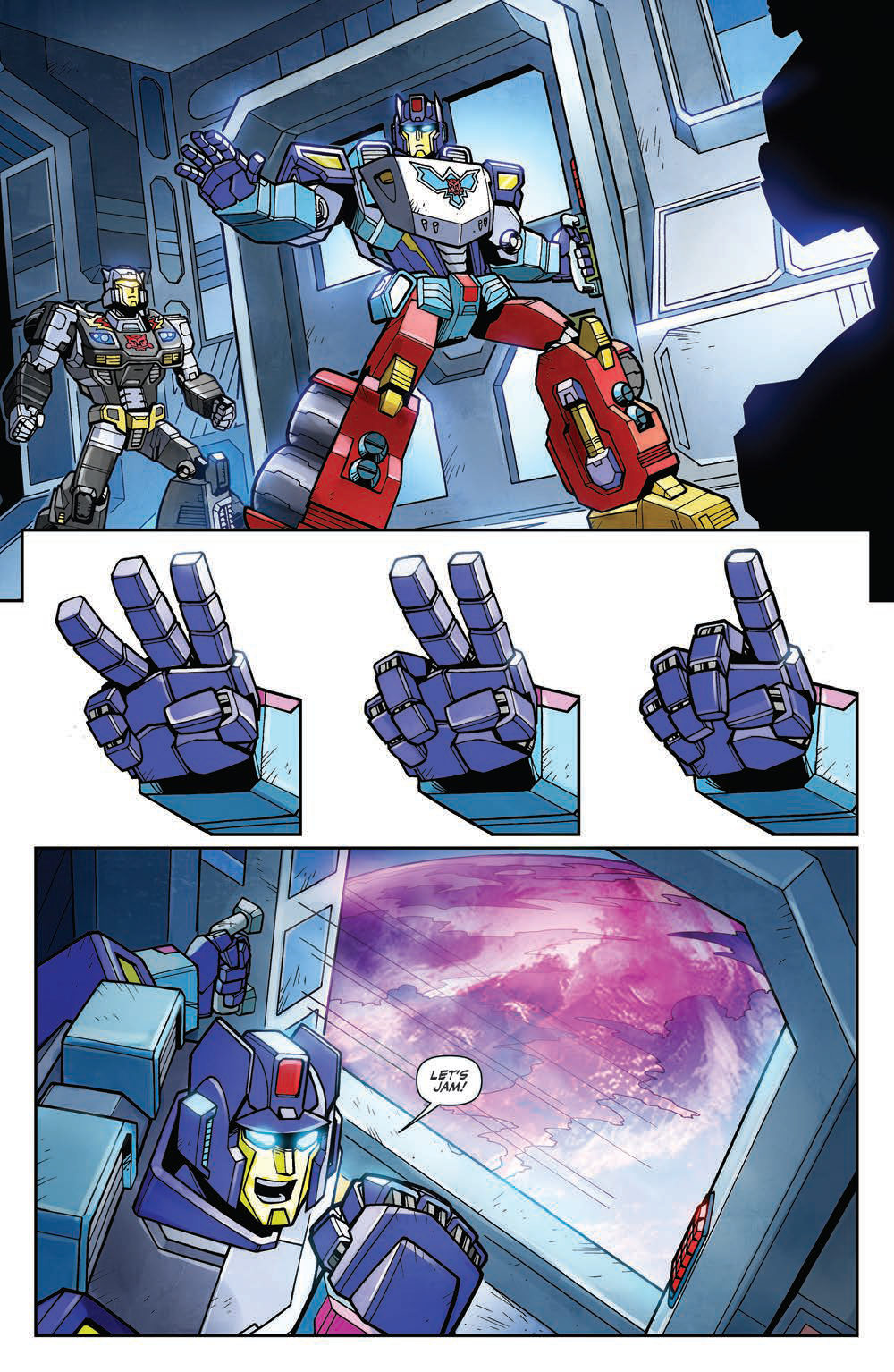 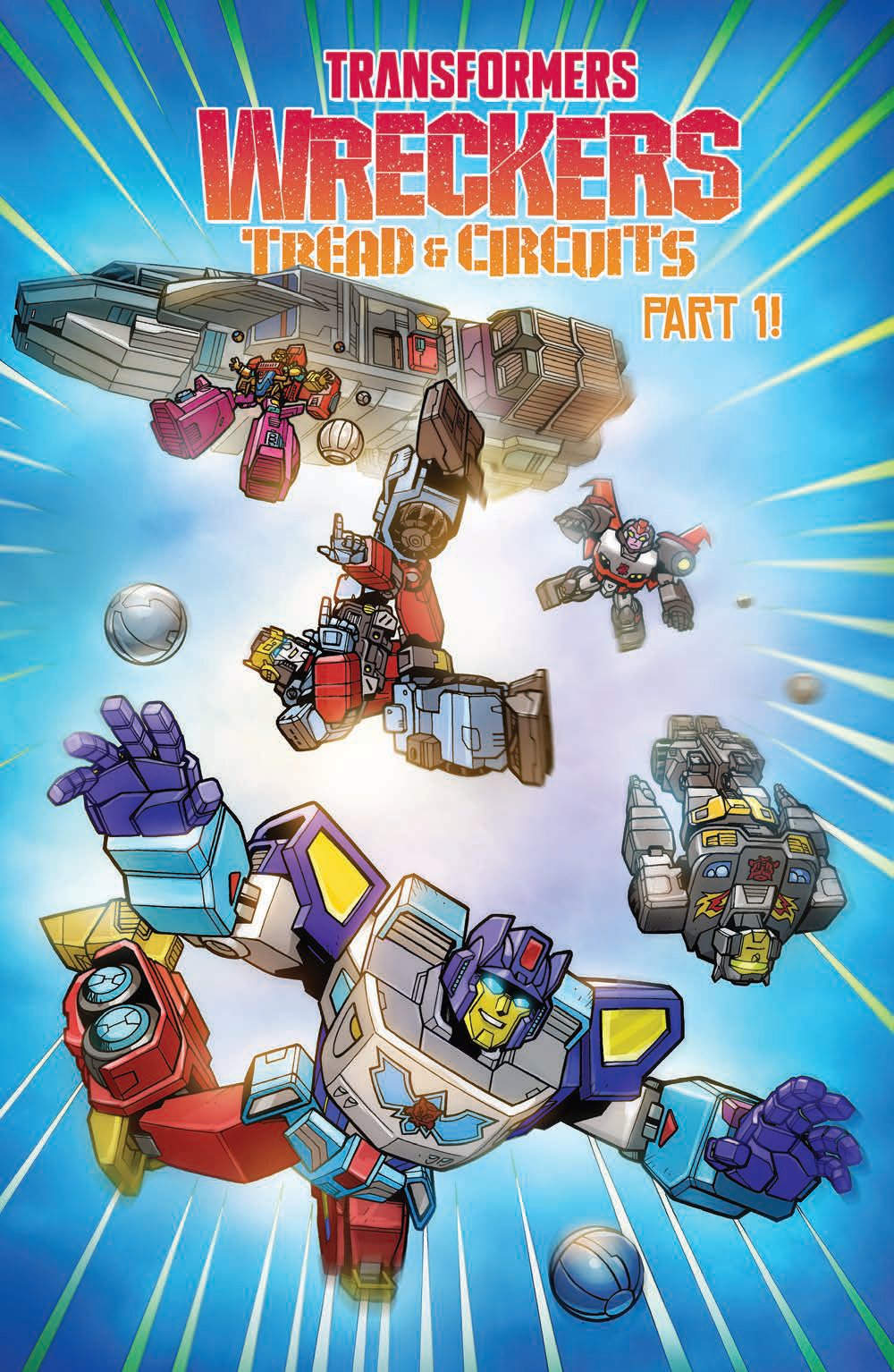 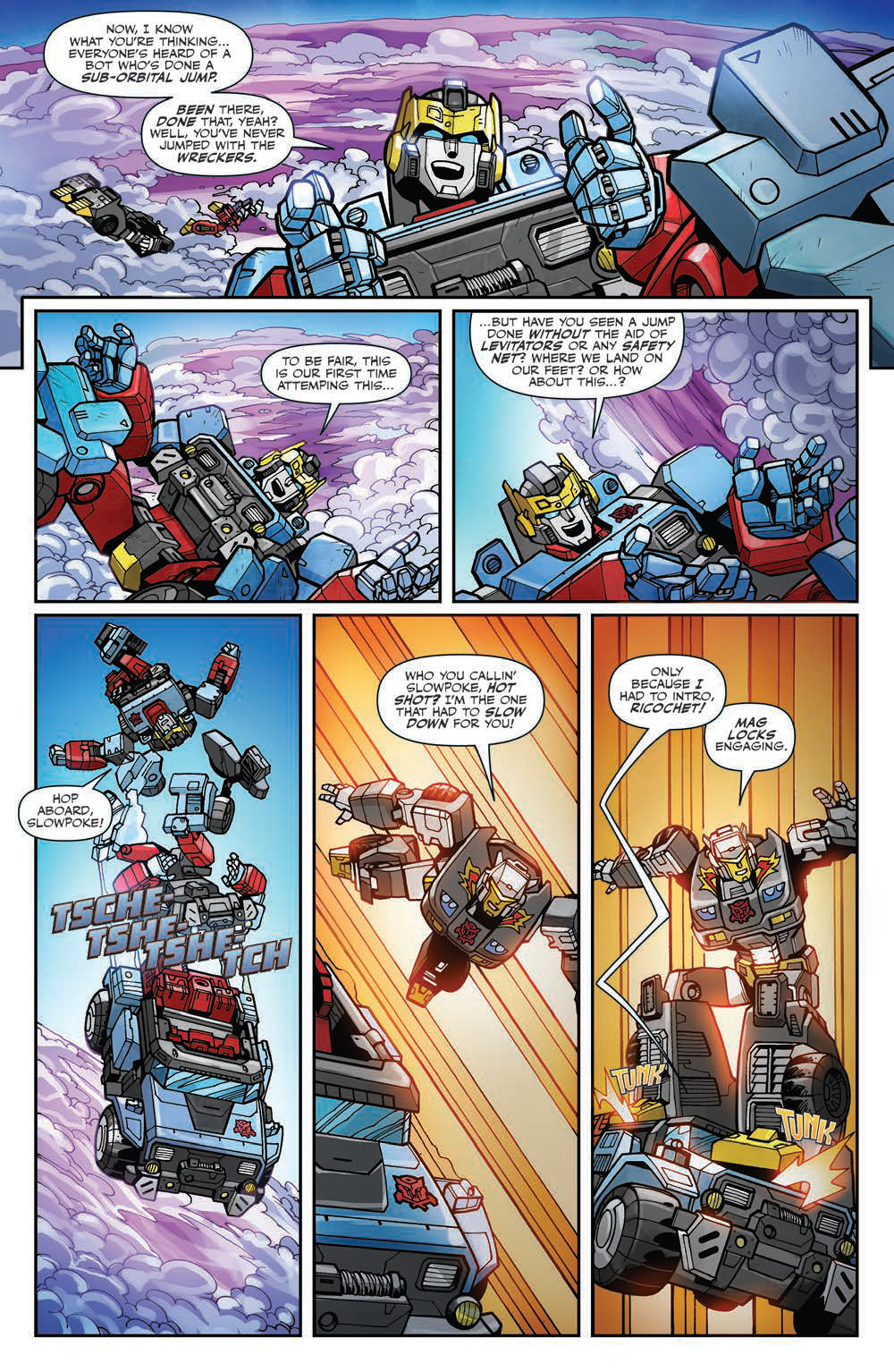 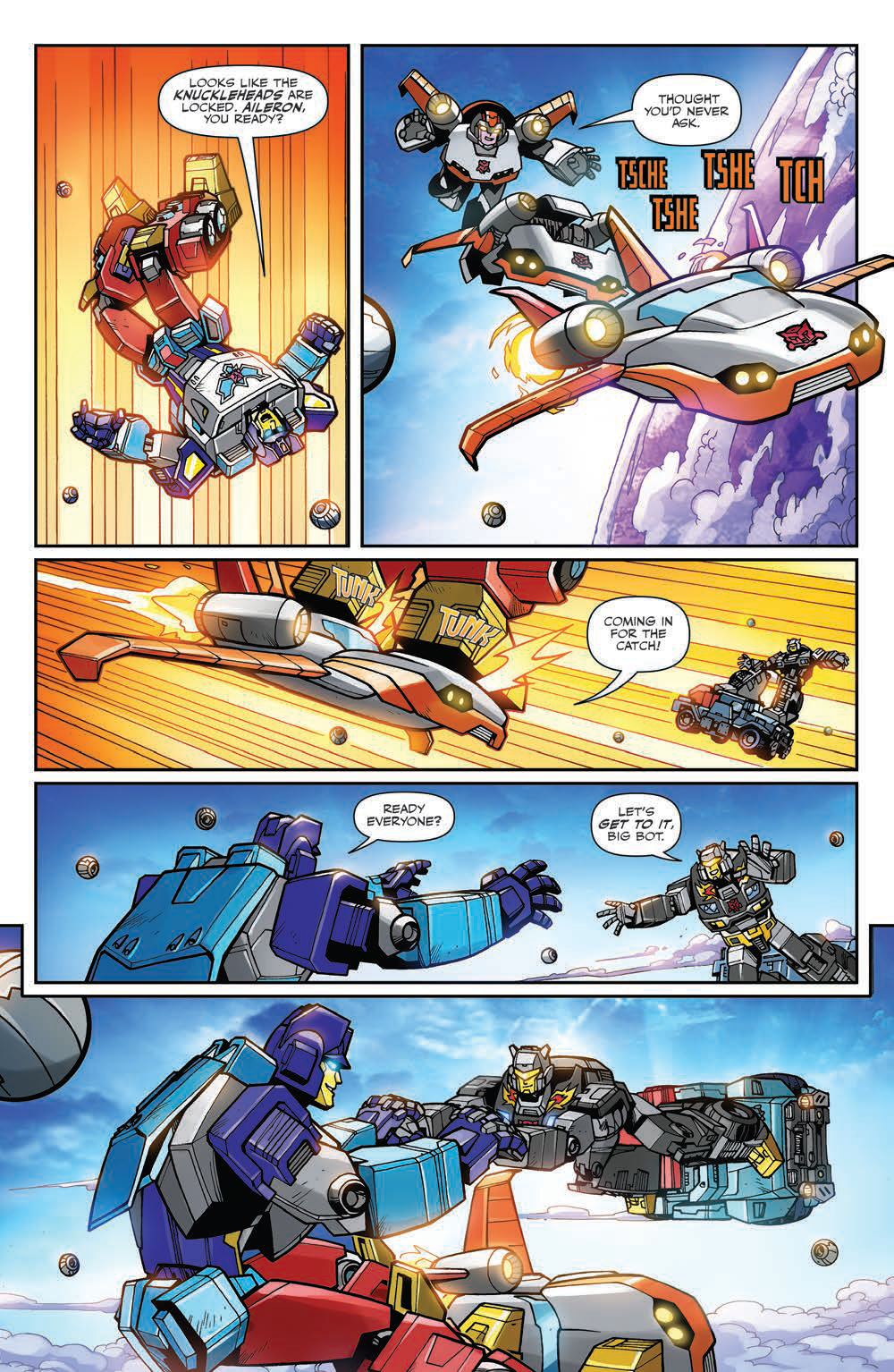 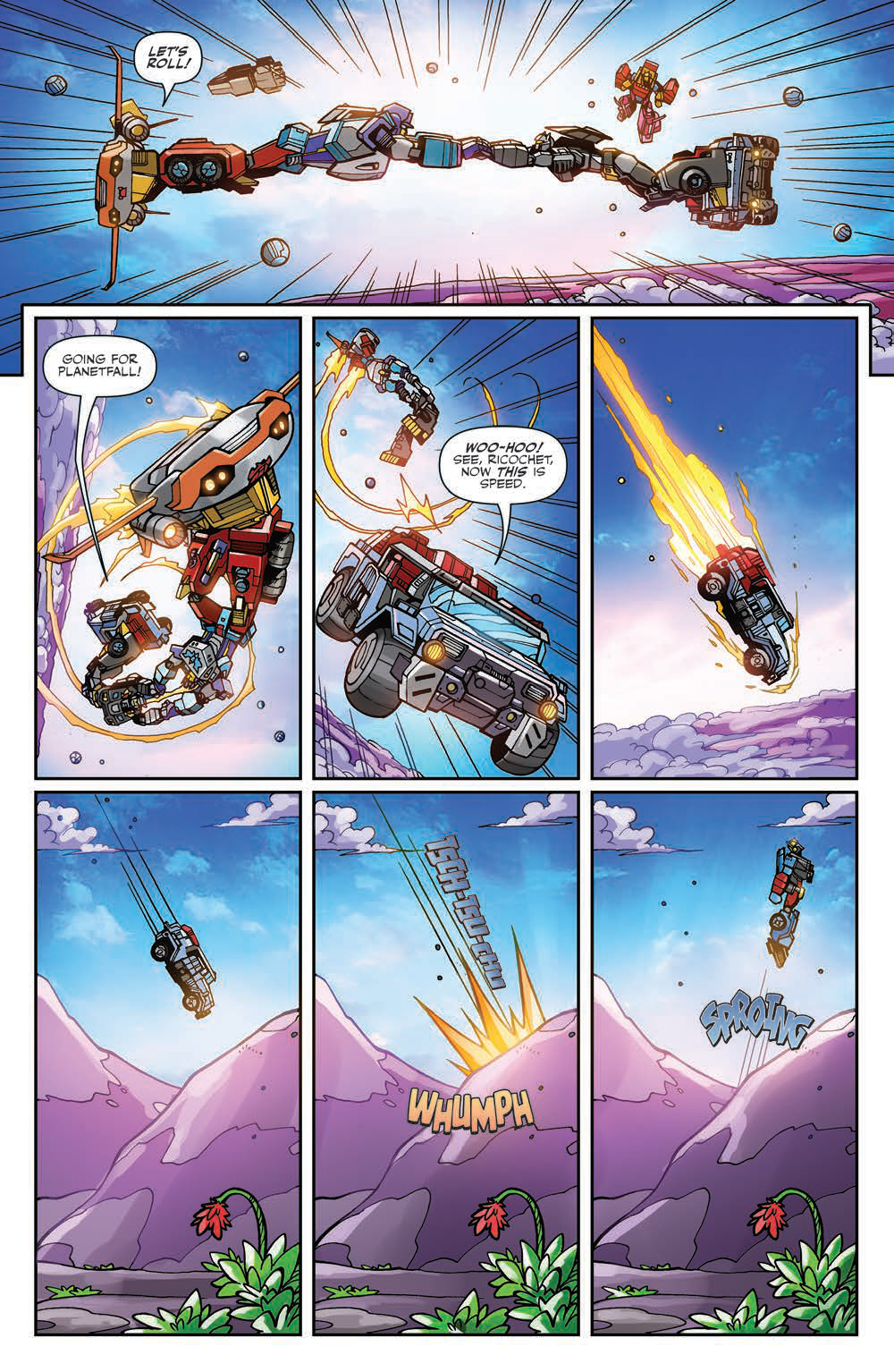 Wash your mouth out with soap. This is respectable website, so there's no need for such vulgar language...

Wash your mouth out with soap. This is respectable website, so there's no need for such vulgar language... 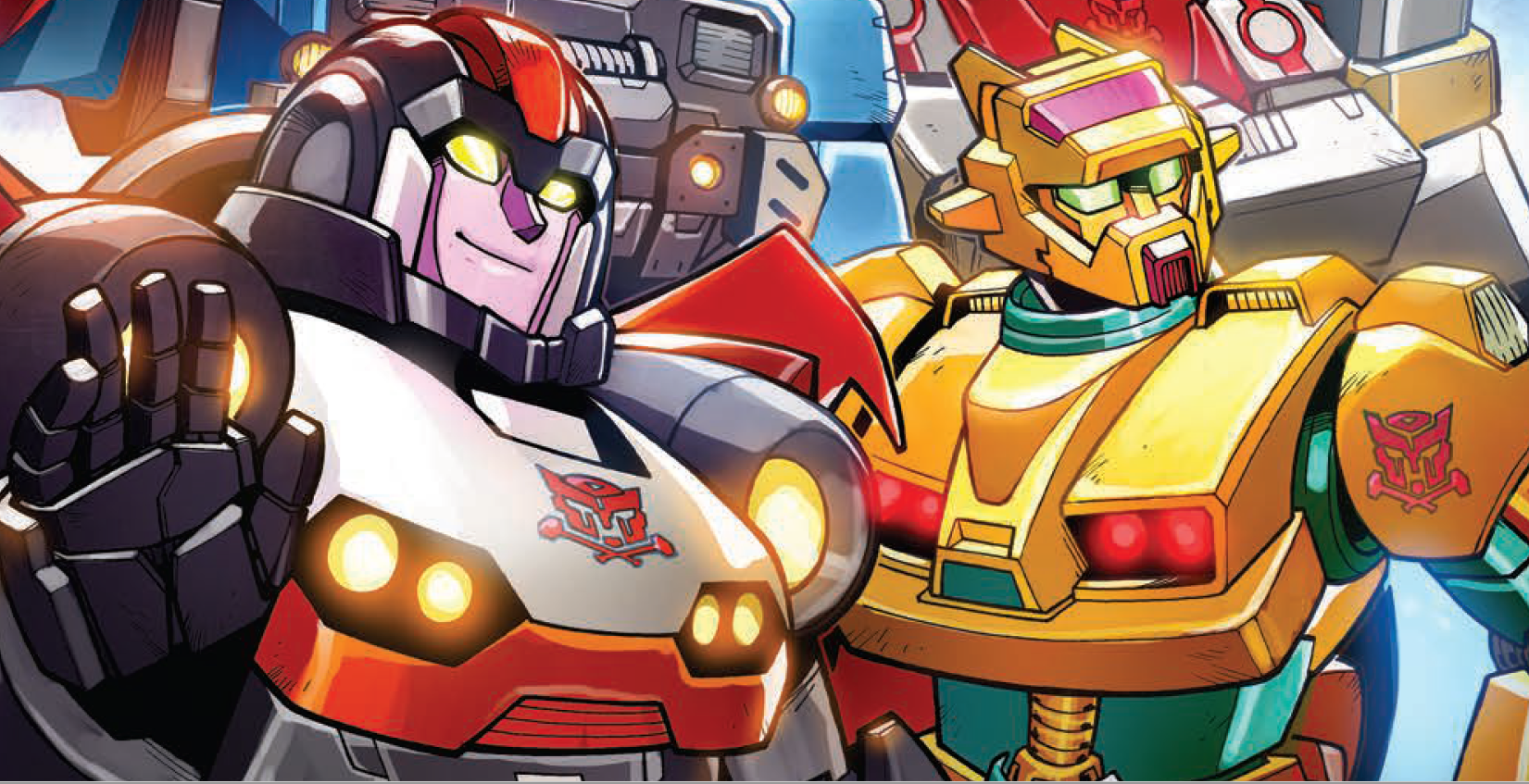 Man I needed this. After the IDW Transformers reboot and the new Beast Wars comic, both of which I found uninspiring for different reasons, this comic really fills a void for fun and well done Transformers comics.

This comic has everything I'd want in a Transformers comic; great art with fully realized backgrounds, likeable characters, quick pacing, world building, ramps, callbacks to Transformers lore, good guys being heroic and villains being bad. Too much to ask? Maybe, but hey I got it all with this comic.

Check out the review below and be sure to pick this issue up tomorrow at your local comic shop, through a licensed digital comics retailer, or via the Seibertron.com eBay store. 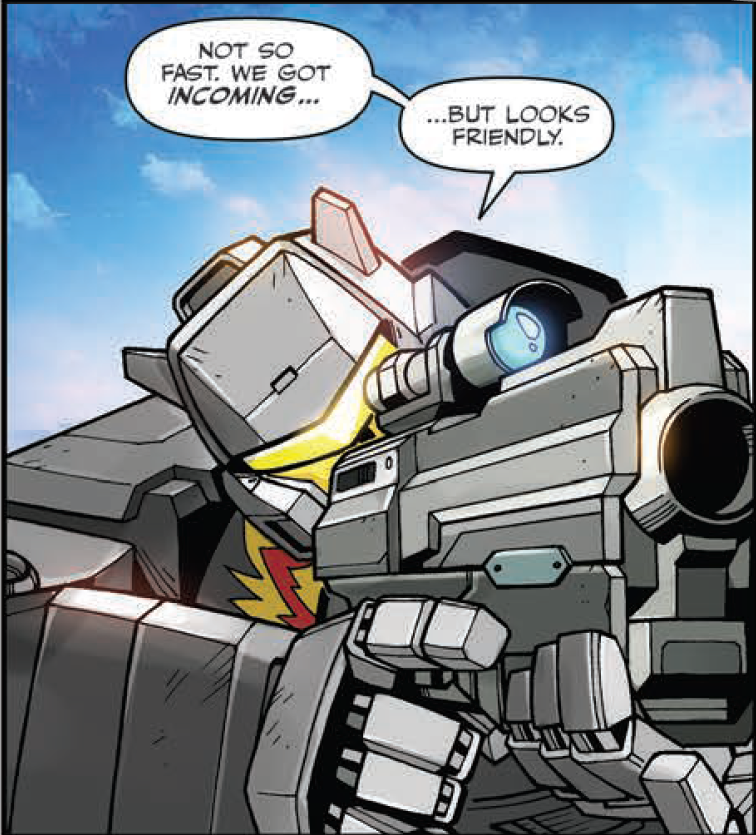 We'll start with this story, the writer cuts right to the chase with the delicious villainy at hand. Nuance can be great but I also like when the bad guys are just plain villains. The franchise was built on a very black and white Saturday morning cartoon ideology and I find the comics often excel when contrasting the villains and the heroes. And hey if you want some nuance, well there is a goal to the villains, and one could say it's a noble one, maybe. But their methods make it pretty easy to root against them. Still, their manifesto is another clever way to include some world building of the political dynamics of this world which is much more exciting in concept and execution than this sentence I just wrote. And I love the characters chosen as the villains too.

Both the heroes and villains are characters that are not often spotlighted but there will definitely be a familiarity to the grotesque looking villains. They are from the late era of G1 which included a bunch of wild concepts. And these toys concepts are woven into the story and world building like with Circuit being an action master and how much of an outsider that makes him on a planet where speed is key. This just makes me want to have a G1 Circuit toy (or Axalon, or both).

And speaking of wanting toys, anyone who chose to get that Seige Hound redeco of Hotshot will love this comic. The alt mode looks great, drawn by Jack Lawrence, as is everything that man touches in this issue. He is definitely giving it all he has with this miniseries, with lots of detail on the bots, varying facial expressions to convey their mood and developed backgrounds. The art is well complimented by Candice Han's colours, which are especially on point in the scene revealing the villains.

This is a fun comic any Transformers fan can enjoy, with vibrant detailed art and story that wastes no time. And hardcore fans will really dig the callbacks and getting some fiction related to very niche characters. Looking forward to issue 2!

Big Grim wrote:Huh. This looks rather promising. Will check it out. Thanks for the review!

was a pleasure, let us know what you think of the book when you get to read it
Re: Five Page Preview of Transformers: Wreckers - Tread & Circuits #1 (2118454)
Posted by ScottyP on October 13th, 2021 @ 5:05pm CDT
I really dug this one too. Excited to see where it goes, and definitely ready to start placing my bets on which Wrecker gets blown to smithereens first. My bet is Ricochet.