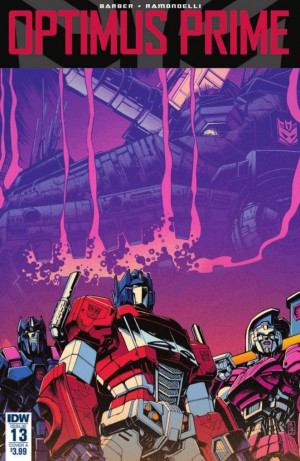 Fresh from the folders of IDW Publishing, we have for all of you a full preview of the latest comic in their ongoing Transformers series, dealing with the aftermath of First Strike, and the first of a two-part story featuring the Throttlebots again.. and maybe more.

Check out the full works on Optimus Prime #13 below, and join us again after the book is released on Wednesday for a Seibertron.com review, an inevitable discussion, and more, all in the Energon Pub discussion boards. 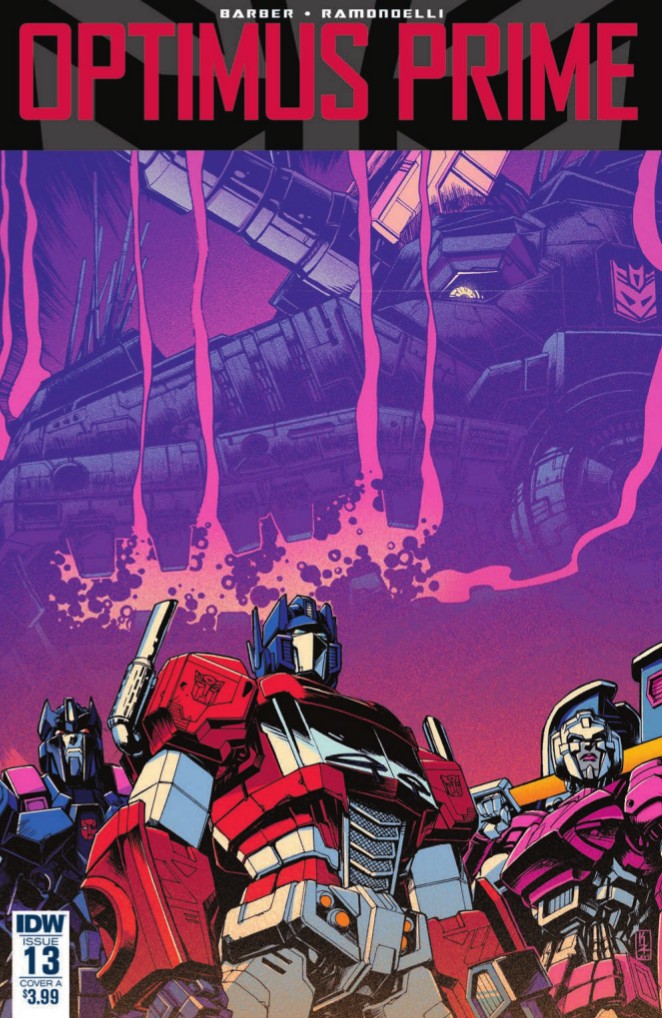 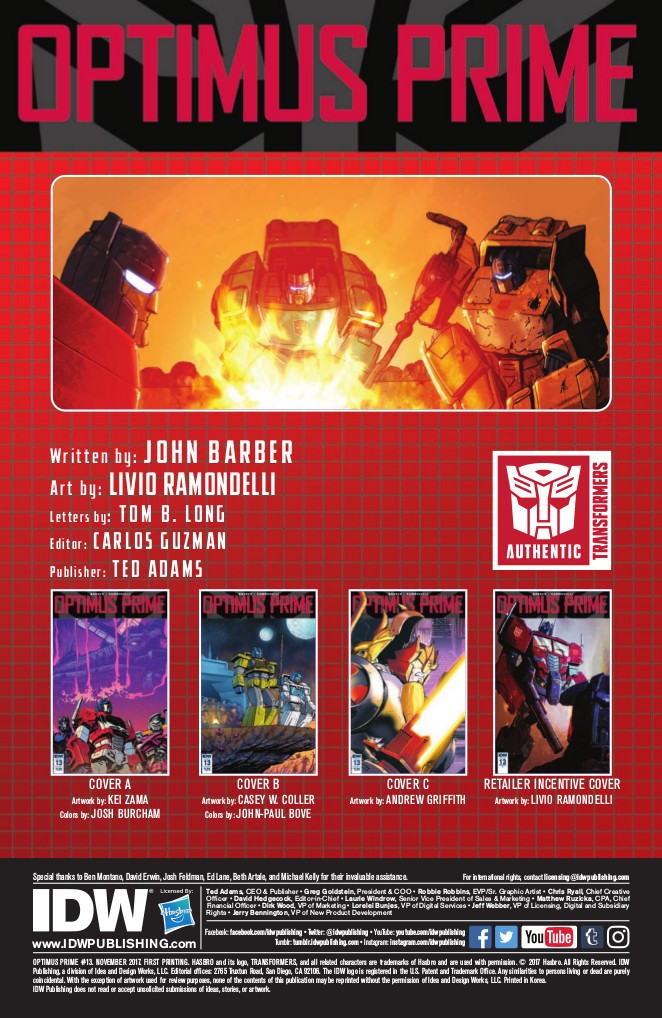 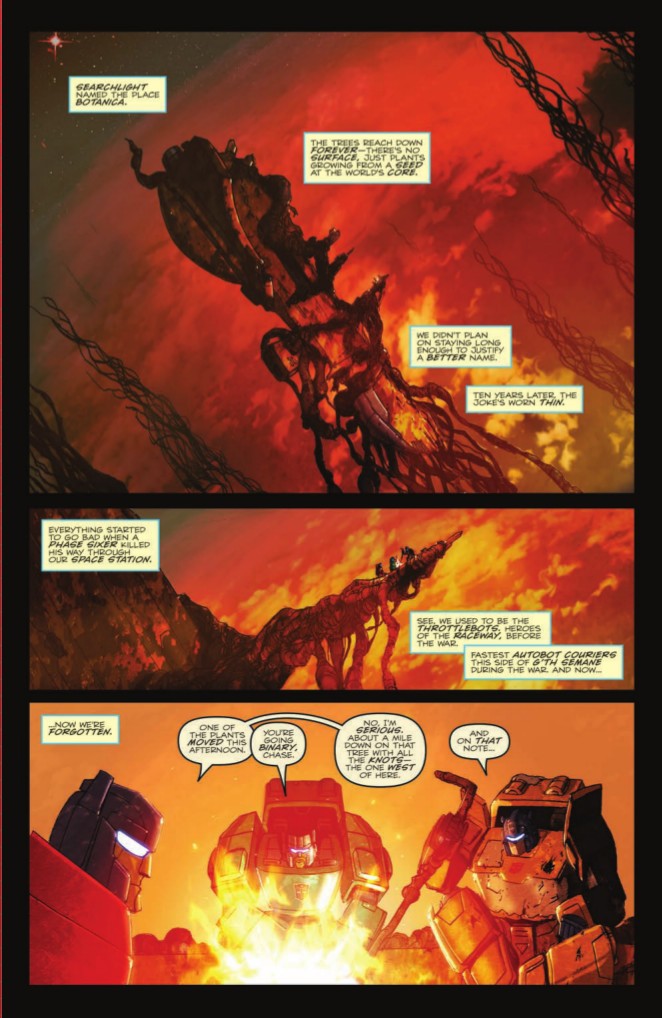 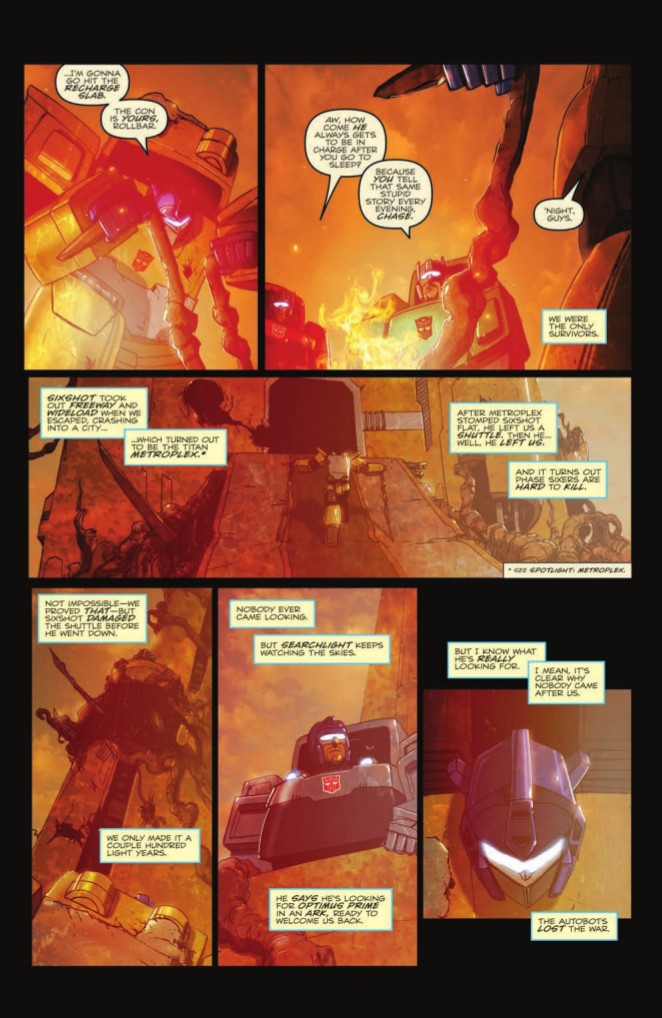 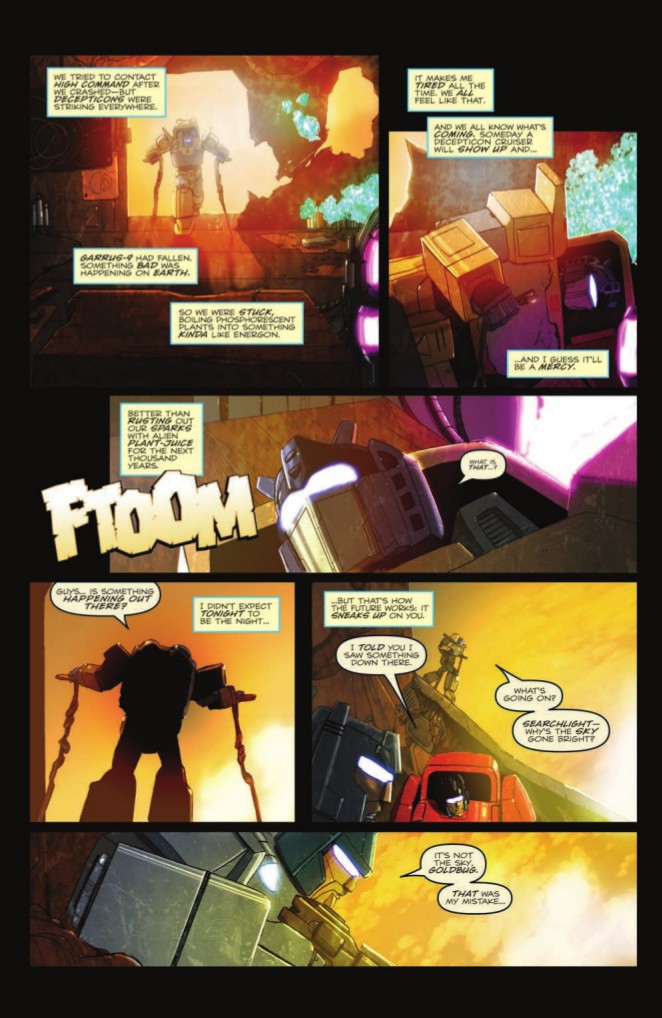 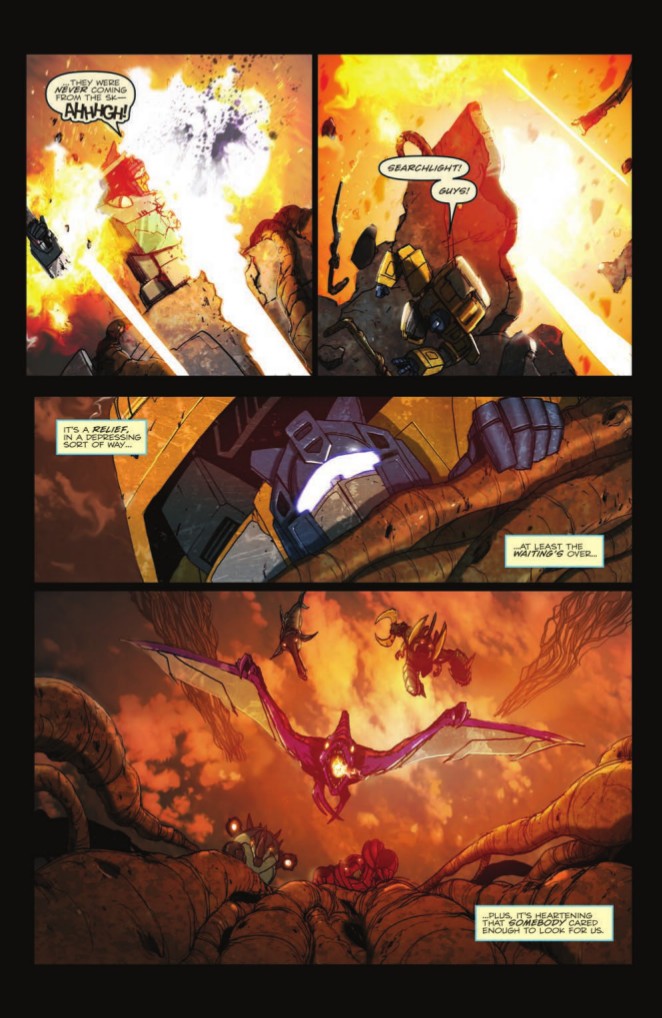 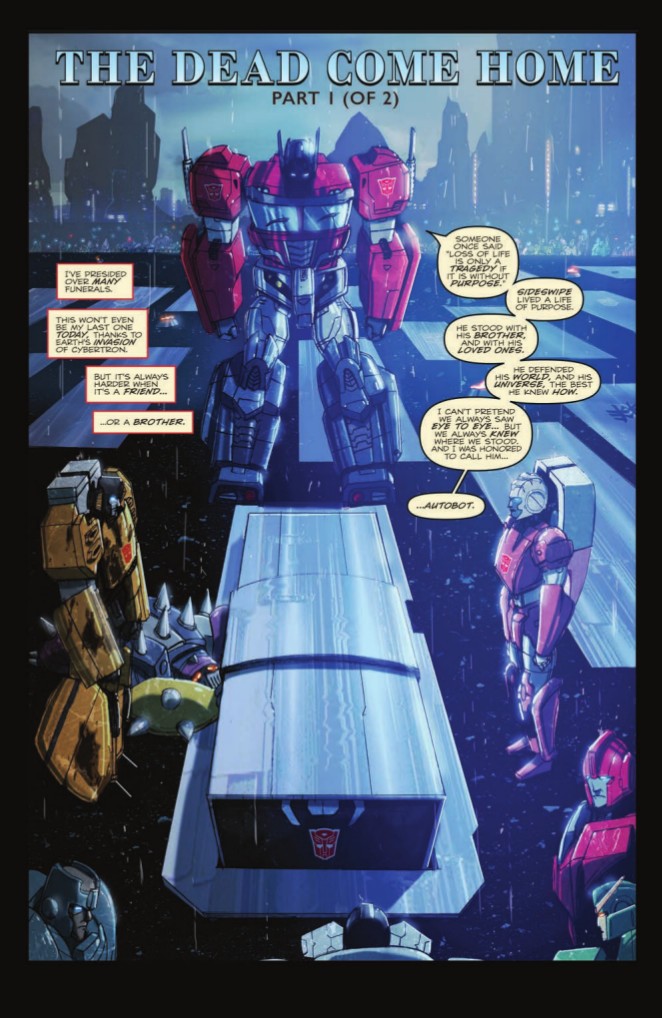 Oh, and just a heads up, John Barber revealed two other characters who will finally be making their return in this issue on the newest episode of Action and Adventure: The Hasbro Universe Podcast. http://hasbrouniverse.libsyn.com/episod ... -never-die
Re: Full Preview for IDW Optimus Prime #13 (1922969)
Posted by ScottyP on November 21st, 2017 @ 10:07am CST

Jumping waaaaay ahead here, but if they manage to use beasts as Unicronian heralds like in BW II and Armada that will be awesome
Re: Full Preview for IDW Optimus Prime #13 (1922972)
Posted by D-Maximal_Primal on November 21st, 2017 @ 10:16am CST

My assumption is those are from the sparks front the hotspot the Dinobots and Trypticon took. Dinobots are building their own Dinobots/army/people
Re: Full Preview for IDW Optimus Prime #13 (1922976)
Posted by D-Maximal_Primal on November 21st, 2017 @ 10:29am CST

My assumption is those are from the sparks front the hotspot the Dinobots and Trypticon took. Dinobots are building their own Dinobots/army/people

But that hot spot is inside Trypticon, on Cybertron, and the Throttlebots never made it back to Cybertron.

My assumption is those are from the sparks front the hotspot the Dinobots and Trypticon took. Dinobots are building their own Dinobots/army/people

But that hot spot is inside Trypticon, on Cybertron, and the Throttlebots never made it back to Cybertron.

See my assumption was trypticon and the Dino’s left. They space bridged away and maybe they ended up on the planet where the throttlebots are. But maybe it is onyx’s forced but I figured maybe it’s not becuase those guys are all dinosaurs

I wish I could share everyone’s sympathy for sixshot but I don’t. He hasn’t shown up for 8 years and he’s not that important in IDW. Not saying I don’t miss him but he wasnt very pivotal before and he really isn’t now.
Re: Full Preview for IDW Optimus Prime #13 (1923259)
Posted by Windsweeper on November 22nd, 2017 @ 8:01pm CST
I really wish IDW would stop using Livio.

Synopsis
As the consequences of the First Strike event reverberate, Optimus Prime ventures into the wilderness of Cybertron to search for the first new Cybertronian life to emerge in four million years!

Getting the truck outta here

We leave First Strike almost entirely behind with this issue of the ongoing Optimus Prime series from IDW Publishing, though there are clear echoes at the start of the comic for sure - some louder than others - but the real accomplishment of the comic overall is just how much story it packs in one single issue. 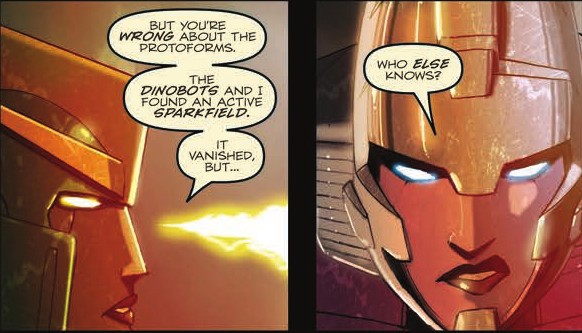 THAT is an Arcee facesculpt expression

You will remember the Throttlebots in the IDW universe only if you were with the publisher's output since the Spotlight days, and specifically Spotlight: Metroplex, and we really had heard nothing from them since - the way in which Barber catches everyone up is admirable, and doesn't fall into the expodump traps it could've, still leaving a lot to be inferred or imagined being left out.

On the other side, we also have a continuation of the Dynobot trilogy, or Redemption of the Dinobots, with some additional information as to what went down after that story 'ended' and what may or may not have happened to the new sparks being discovered and activated, yet again leading to more questions answered and other not at all.

Arcee is still the best

And finally, we have some references to both Rom vs Transformers: Shining Armor - which will see its final issue next week - and the First Strike event, which this comic serves as one of the consequences of in terms of the general frame. And it's a frame that makes perfect sense, once you take into account how the stories have crossed paths, and who shows up in the multiple scenes that you will enjoy spending time identifying - or just using our database for (warning, spoilers obviously).

The art by Livio Ramondelli adds a nice touch of continuity with the Redemption of the Dinobots story, as the writing does for First Strike and the others - and it's one of his best efforts yet, with some true standouts when another returning character appears in his machinations, and some seriously eery scenes looming over pretty much the entire book.

Ramondelli obviously also provides his own colours, and much like for the Dinobot one-shots, the choice of palette and tones used in different scenes fit perfectly to the surprisingly very dark issue that Barber's script has laid out. The flames on one side, the cold metal on the other, it does feel like the heart of something is weighing heavy, all the way through.

The lettering is once more in the hands of capable Tom B. Long, and his combinations with Ramondelli's style always stands out a little more than usual - usually thanks to the hues of the backgrounds - but that's never a bad thing. The cover used for the thumbnail is the exercise in empathic emotion, with Casey Coller and John-Paul Bove taking on the surviving Throttlebots at their most vulnerable yet resilient; all others can be found in the Database entry for the issue here.

If you've read through me trying to highlight a couple of strands present in the issue, you make have one of two takeaways: there is a lot going on - perhaps too much, and it can get overloading or overbearing after a certain point, especially as a newer reader; there is a lot going on, and that's the best thing we could've had from a story like this, merging together threads that had been almost liminal so far. I veer on the latter, but entirely understand the former. 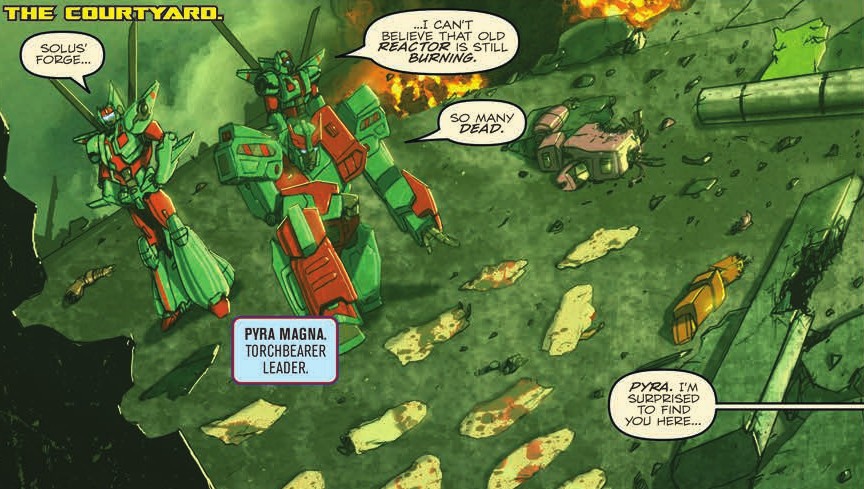 The visual side of the book fits the tone and hits the spot exactly for the issue, and it helps deliver an intricate set-up and build of that merging I just mentioned - what I am concerned about, if anything, at this stage, is the landing. We'll see next issue how Barber and the others conclude this incursion into contemporary Hasbroverse, after such a strong take-off. But if you liked the Spotlight era, the Dinobots, the science experiments, and certain unlikeables - and a lot more about Arcee, which is never turned down as an offer - this book is for you.

Nik Hero wrote:So it seems this book happens after Transformers vs. Visionaries, right?

At the same time as the first issue, in fact - directly after First Strike, both stories start to unravel.

Re: Full Preview for IDW Optimus Prime #13 (1923463)
Posted by Randomhero on November 24th, 2017 @ 1:23pm CST
I loved this issue. Super wordy and quite an info dump but it was damn good. Kept reading and halfway i said “is this an extra long issue?” No it’s just got a lot going on in it. With Onyx and Liege Maximo coming back in January-something i thought wouldn’t happen till the Power of the Primes event- I’m curious to what power of the primes will be about.
Re: Full Preview for IDW Optimus Prime #13 (1923917)
Posted by william-james88 on November 27th, 2017 @ 10:00pm CST
IDW posted on Twitter that the incentive cover for Optimus Prime 14 will be from James Raiz, in an attempt to make the most detailed drawing of Trypticon ever. James Raiz has done a series of videos on his youtube channel, the box office artist, featuring his process in doing the most detailed drawings of Transformers characters. However, all those were not solicited by official channels. But his hard work paid off and his drawing of Trypticon is comissioned by IDW to be the 10 copy retailer incentive cover. Raiz also most recently did the interior pages for the Unicron reveal in First Strike #6, so it is great to see this amazing artist get his due with some really cool paid work.

IDW wrote:@boxofficeartist presents The Most Detailed Drawing Ever of Transformers Trypticon! Get a behind-the-scenes look at the incredible skill that went into creating this astounding cover for Optimus Prime #14.

The tweet had a link to the video below which shows his process for drawing the Trypticon cover. We also included an other example of what his youtube channel can offer, which includes courses on drawing Transformers like Grimlock.

As for the claim that this is the most detailed Trypticon drawing out there, Studio Ox may want a word in (if this below is considered a drawing).

Re: Full Preview for IDW Optimus Prime #13 (1923919)
Posted by Randomhero on November 27th, 2017 @ 10:06pm CST
Now I love James Raiz art. He doesn’t get enough work but it just looks like an old Dreamwave cover or art piece with all those panels and looks like he’s got leprosy.