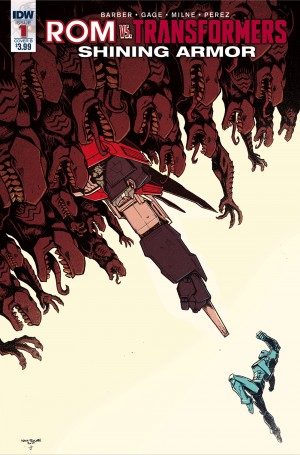 Found in this week's digital copies of IDW Publishing's Optimus Prime #9 (our review can be found here!), was a five page preview of the upcoming first issue of a new series featuring Cybertronians in the wider Hasbro Universe: Rom vs Transformers: Shining Armor! With the Galactic Council doing their best at being the worst, the Solstar Order doing ..their thing, and new character Stardrive showing up - check it all out below, including a variant cover by Nick Roche and Josh Burcham!

Meet the universe's only Cybertronian Solstar Knight! Hundreds of years ago, Rom discovered Stardrive, the sole survivor of a doomed space probe. Stardrive committed herself to protecting the galaxy from the Dire Wraiths... but when the Decepticon called Starscream makes a deadly deal, Rom and the Transformers are forced into a collision course... with Stardrive caught between two worlds! 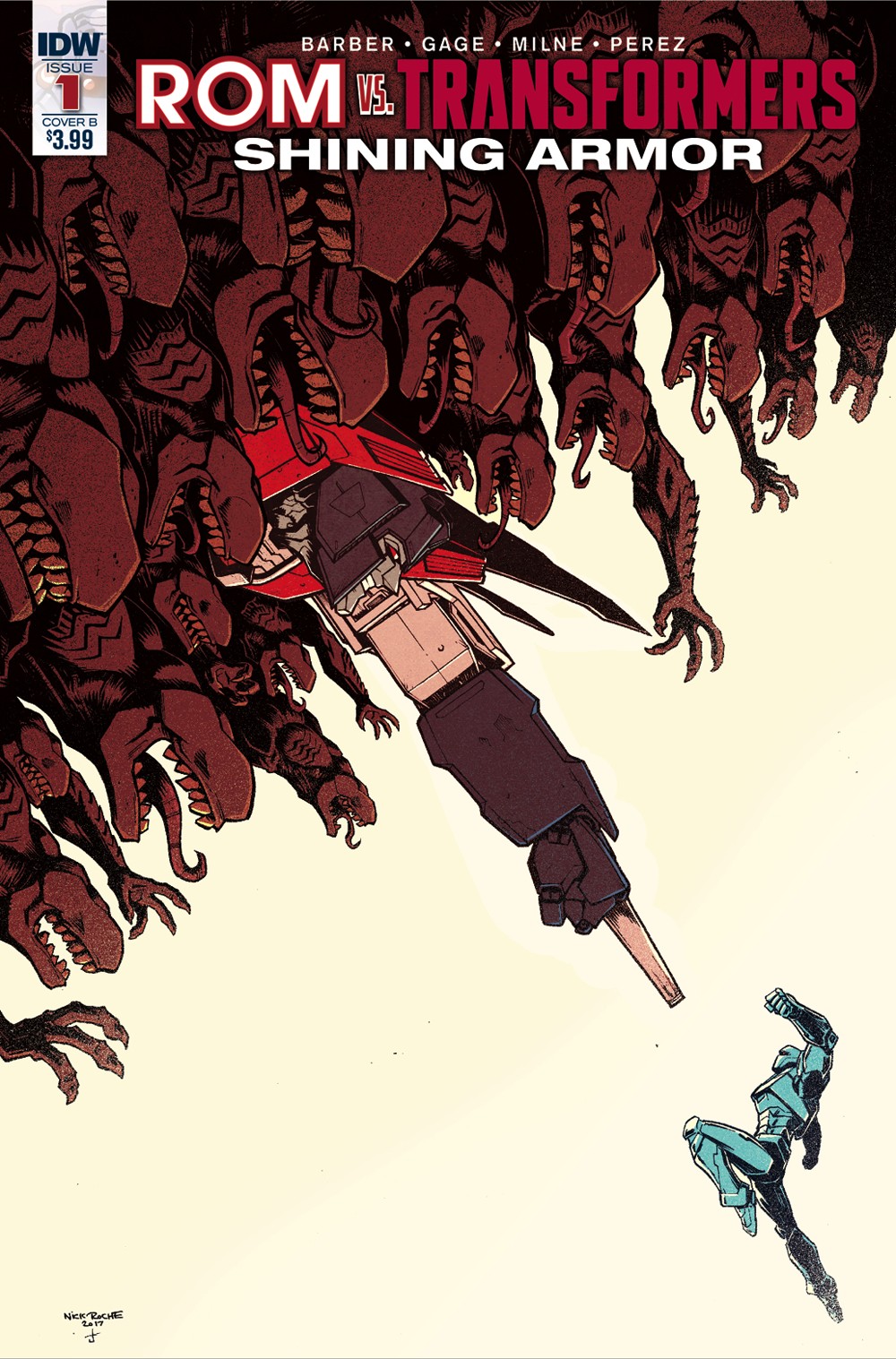 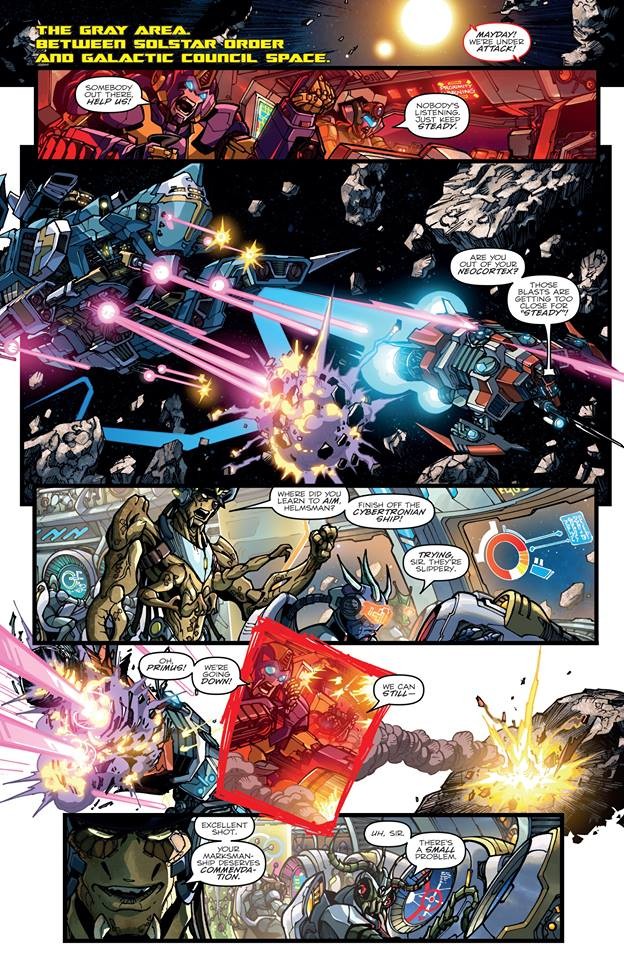 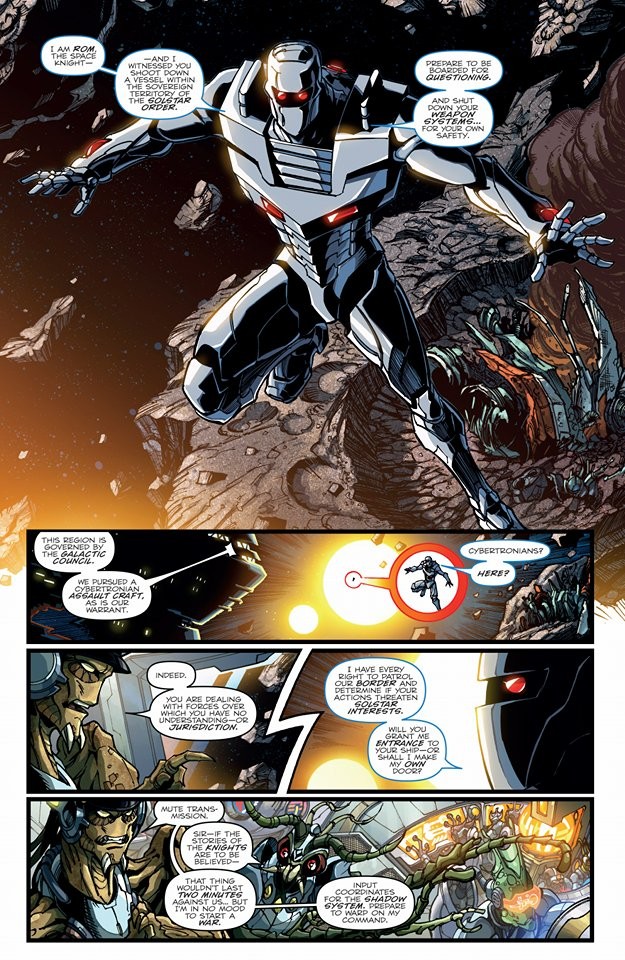 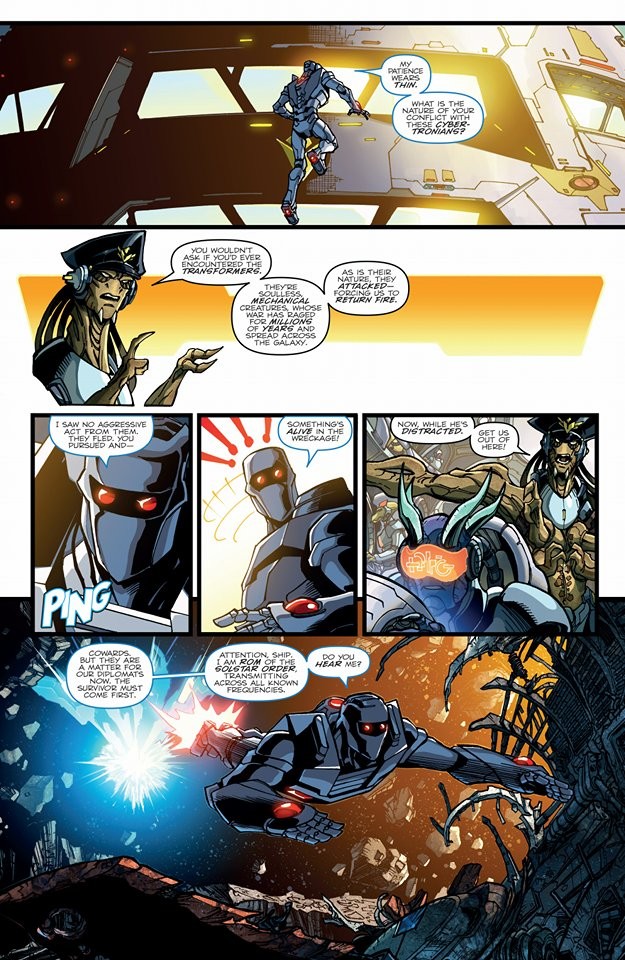 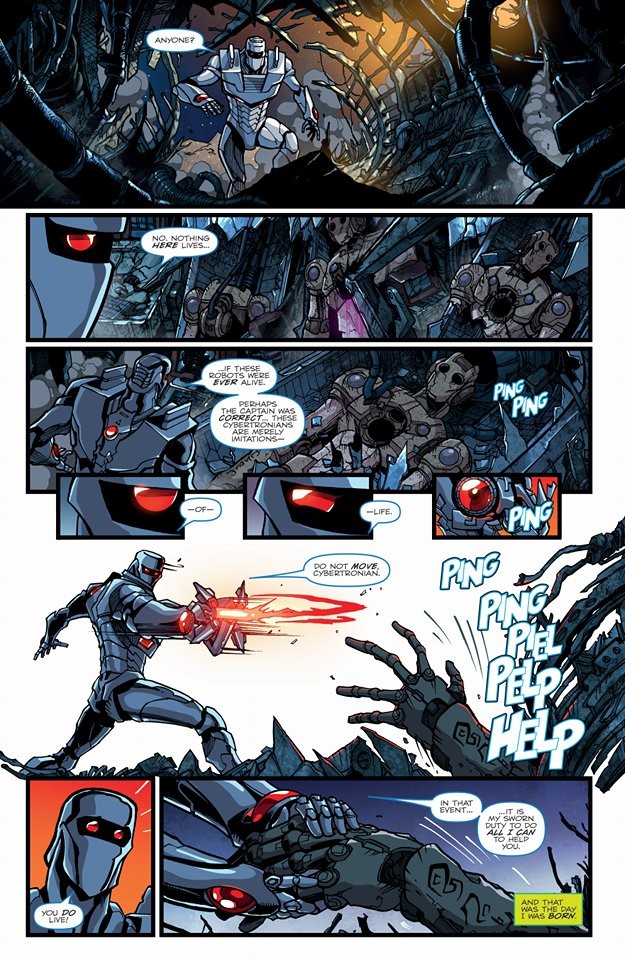 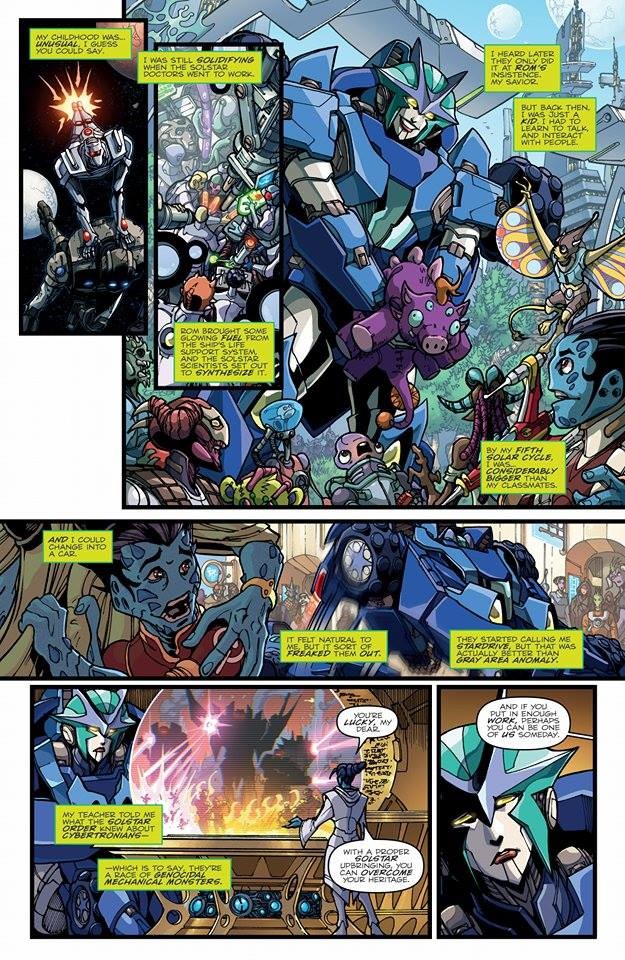 Kurona wrote:Yup, loving this already -- they're really taking advantage of the setting

Synopsis
Meet the universe's only Cybertronian Solstar Knight! Hundreds of years ago, Rom discovered Stardrive, the sole survivor of a doomed space probe. Stardrive committed herself to protecting the galaxy from the Dire Wraiths... but when the Decepticon called Starscream makes a deadly deal, Rom and the Transformers are forced into a collision course... with Stardrive caught between two worlds!

An entirely new series, with a different creative approach, and a mix of Transformers and Rom veterans on the writing and art teams, introducing a new character in the middle of a past world and timeline, and the meanest 'diplomats' around - if you were looking at crossovers, and how to do them, this is probably the book you were waiting for.

and pain, sure, why not

One of the major complaints about how IDW Publishing is handling the sudden shared universe, with all of the Hasbro licensed properties, is exactly that: its suddenness. None of the books have had a chance to establish themselves and their stories, or even their own in-worlds, before they were blown up into the wider narratives of all of the others. 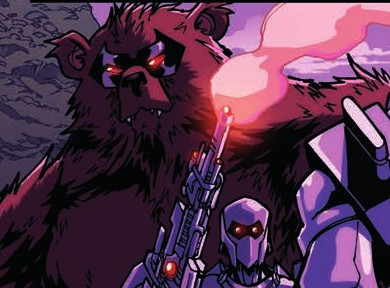 That is not what John Barber and Christos Gage have done here. Starting from the Solstar order itself, with the Wraith Wars alluded to and slightly explained, the Galactic Council working against everyone while wearing silly hats, we get to find so much foundation to the world of Rom and the Knights that we were perhaps still missing from his main series. Plus, plenty of Transformers cameos, of course.

And then, of course, we have newcomer Stardrive - a Cybertronian raised to fear her race by the Order, made to become part of the Order though never fully accepted by the others, especially the younger cadets, a new perspective on a story that Transformers fans know a lot about, 4 million years of in fact, and finally ask: was the universe right all along?

Alex Milne is on art, and that will make a lot of readers happy. What particularly please me, however, is the approach to the art, as explained in a recent interview: they work plot first, meaning that Milne has pretty much the entire say on how everything in the book looks, no dialogue is fully pre-planned - and I'll admit, it shows, wonderfully so.

Add to that the Gundam references, too

The colour side of things is handled by Josh Perez, reunited with Milne linework beyond covers, and the shiny-ness of the Solstar Order is something that suits both of them well - alongside some seriously impressive shifts in tones and hues, juxtaposing Stardrive's childlike innocence with the horrors of the Wraith and Cybertronian Wars. 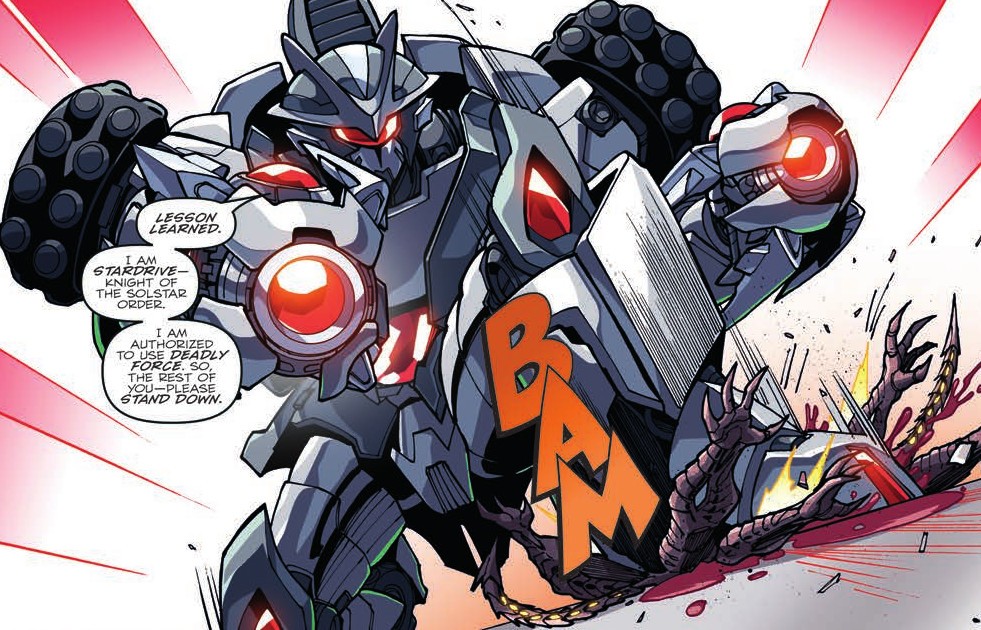 Tom B. Long is clearly also having plenty of fun with the lettering in the book, as plenty of old sound-words return to grace the panels unencumbered by walls of dialogue and squeezed spaces. Enjoy the

The thumnbnailed cover is the variant by David Lafuente and Lovern Kindzierski, spotlighting something that doesn't happen in the story, really, but sets the tone for sure. Plenty more - including Roche/Burcham, Villanelli/Alexakis, Milne/Perez, can be found in our Comics Database entry!

The world-building in this book, born out of both visual and writing teams, is fantastic. Truly admirable how starting from a Transformers base allows for so much to create about the wider universe, give us enough to understand Rom and his world without exposition dumps, and viceversa, give Rom fans just enough about Transformers to make Stardrive's situation fully understandable - if a little standard, narrative wise. 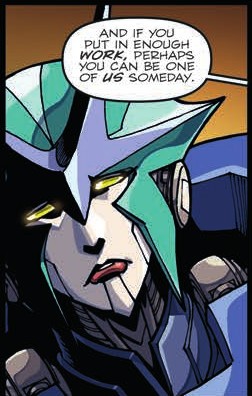 There are puns - Sata and Auxin, above all - and Gundam references, points out ScottyP; there are allusions to diplomacy, treaties, peace-keeping, and wars; there is more Starscream (basic Starscream, argues Kurona, but Starscream nonetheless); there are oddles of alien races and designs dotted across the entire issue. It may still be a baby knight on its first mission, much like Auxin, but this mini-series is bound to shine.

That said I did enjoy this issue. I was pleasantly surprised. I found Stardrive and Rom likeable.

It was also cool seeing Starscream and Ultra Magnus especially in a story set during the war. For the first time I'm looking forward to the next issue of a Barber written comic.
Re: Full Preview for IDW Rom Vs. Transformers: Shining Armor #1 (1897812)
Posted by Va'al on July 20th, 2017 @ 4:43am CDT
To round off the review for IDW Publishing's first issue of Rom vs Transformers: Shining Armor, we have some character designs of robot characters - you know, our side of the vs equation - courtesy of arist Alex Milne on Twitter. Specifically, we get a look at 200 years ago (so still in the Aubotot-Decepticon war) Starscream and Bumblebee, plus new character Stardrive. Check them out!

Since ROM vs Transformers 1 is out today, let me share some fun stuff with you. We will start with Bee

My design for Stardrive. Only some slight modifications were made to her head crest for her look in the comic. 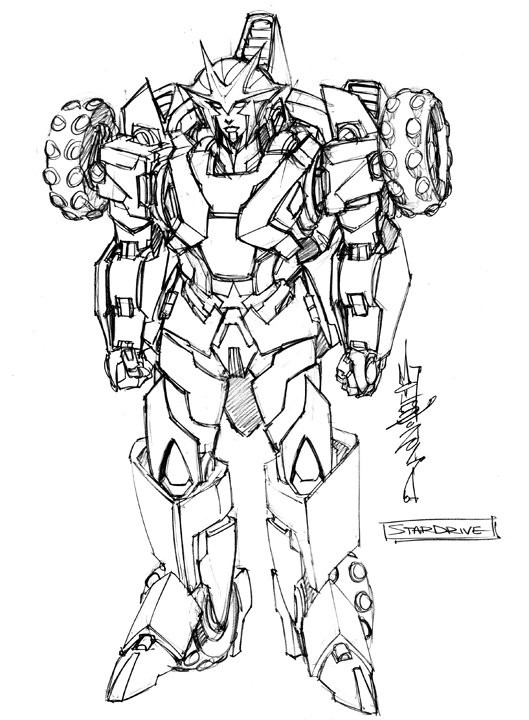 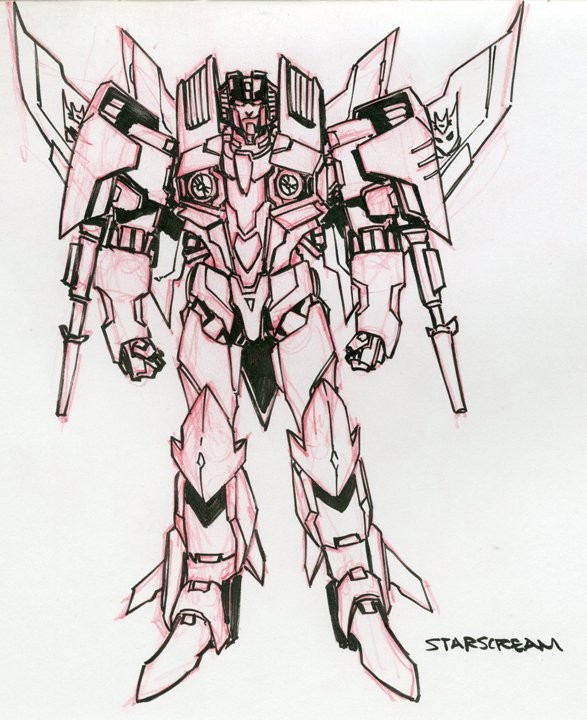 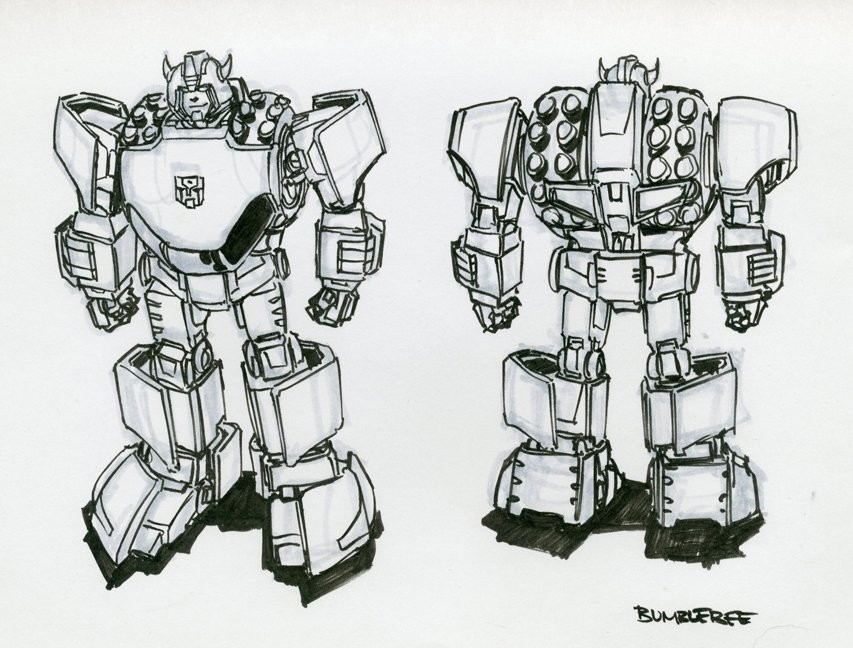 Kurona wrote:I loved these designs a lot in the comic -- though one thing that confused me is the strange bolts on the tires of both Bumblebee and Stardrive. Was that just a thing for Cybertronians a few centuries ago? Was Tracks trying to spread his new fashion?

Think about it. Their tires are practical because their roads are metal which would require an enormomous amount of traction.

While no doubt a coincidence it was touched on in all hail Megatron when they were driving on cybertron they were having problems driving because their tires were meant for earth terrain and not cybertron.
Re: Full Preview for IDW Rom Vs. Transformers: Shining Armor #1 (1897821)
Posted by Randomhero on July 20th, 2017 @ 7:28am CDT
I really liked the story. I think it's fun and like I've said before I enjoy cross overs. Not just because it has transformers but most crossovers. In my opinion they do less harm than what some say they do and I enjoy interactions with characters you wouldn't think would.

I really enjoyed the easer eggs of the Chinese transformers online game. The cons that get killed are not generics but characters in that game.

Bee's Girlfriend wrote:I think Stardrive looks like a mix of Lost Light Drift and Chromedome, but as a Camien in this picture.

In other words, the current generic Alex design WreckerJack wrote:Stardrive looks like Strongarm but more sweet and gentle in that sketch.

You mean the image they lifted from the cropped version I posted in my review? Sure.

WreckerJack wrote:Stardrive looks like Strongarm but more sweet and gentle in that sketch.

You mean the image they lifted from the cropped version I posted in my review? Sure.

(and this is why we use our database, and not TFwiki.)

Daniel Adkins wrote:You sure they didn't just crop their own version of that same panel? I mean, it is a pretty awesome panel.

I just wanted to side-eye people on staff using TFwiki images when I post the exact same one.

Re: Full Preview for IDW Rom Vs. Transformers: Shining Armor #1 (1899204)
Posted by D-Maximal_Primal on July 24th, 2017 @ 12:01pm CDT
It was a great first issue, and this shows that what I was hoping for in this crossover is happening. It is turning out good and I like it a lot
Click here to view additional comments about this topic at the Energon Pub Forums ...