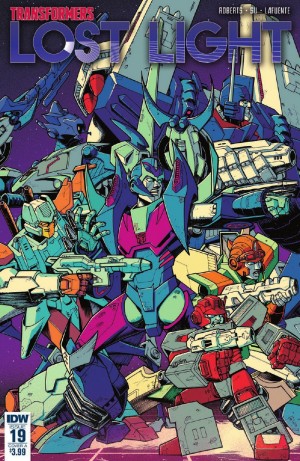 Fellow Seibertronian Spades has shared with us the full preview - courtesy of Comic Crusaders - for next week's new comic from IDW Publishing and their Transformers ongoing series: Lost Light #19! We return to recaps, to Scavengers, to Team Rodimus, and plenty of new challenges, with the art of Transformers comics veteran EJ Su - check it all out below, and join us next week for a review and more discussion as the final arc of the series begins here!

Years ago, the crew of the Lost Light fought a demonic Cybertronian mutant that fed on its victims’ souls. Years later, Rodimus and Co. are about to discover that the only thing worse than a sparkeater… is an army of sparkeaters! 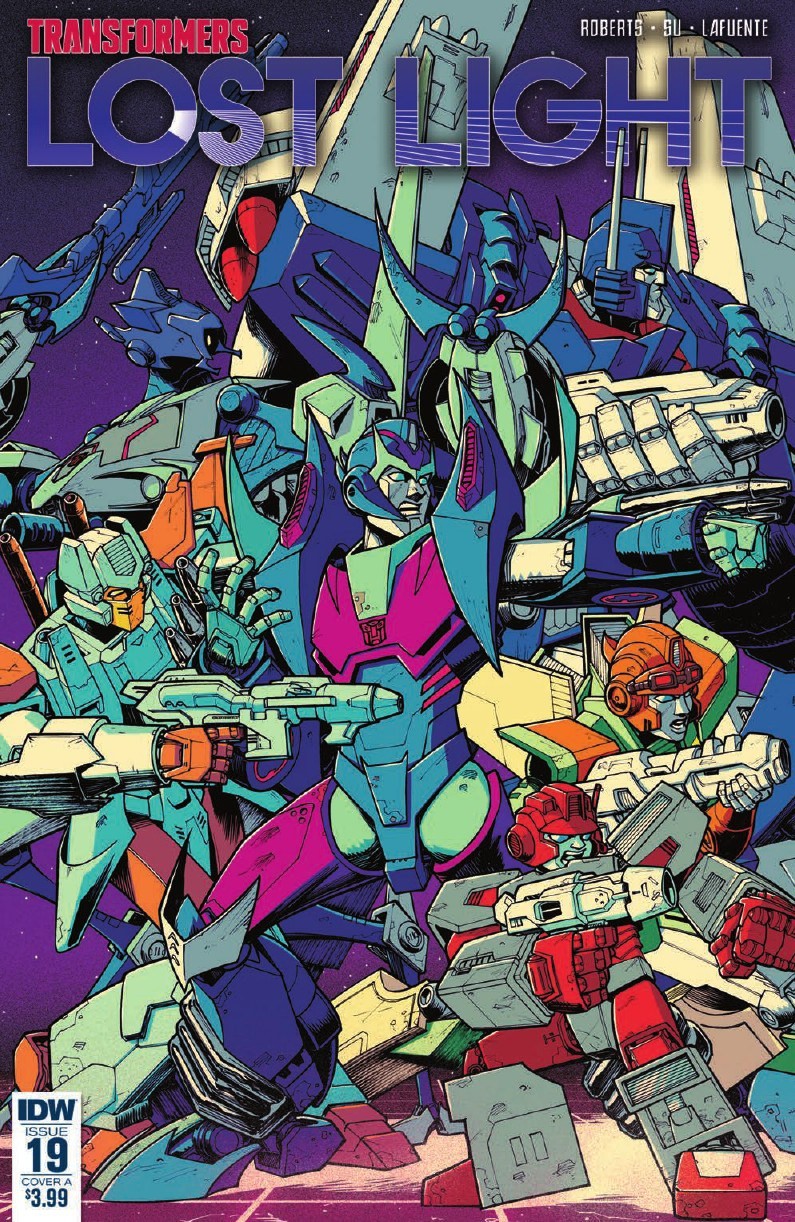 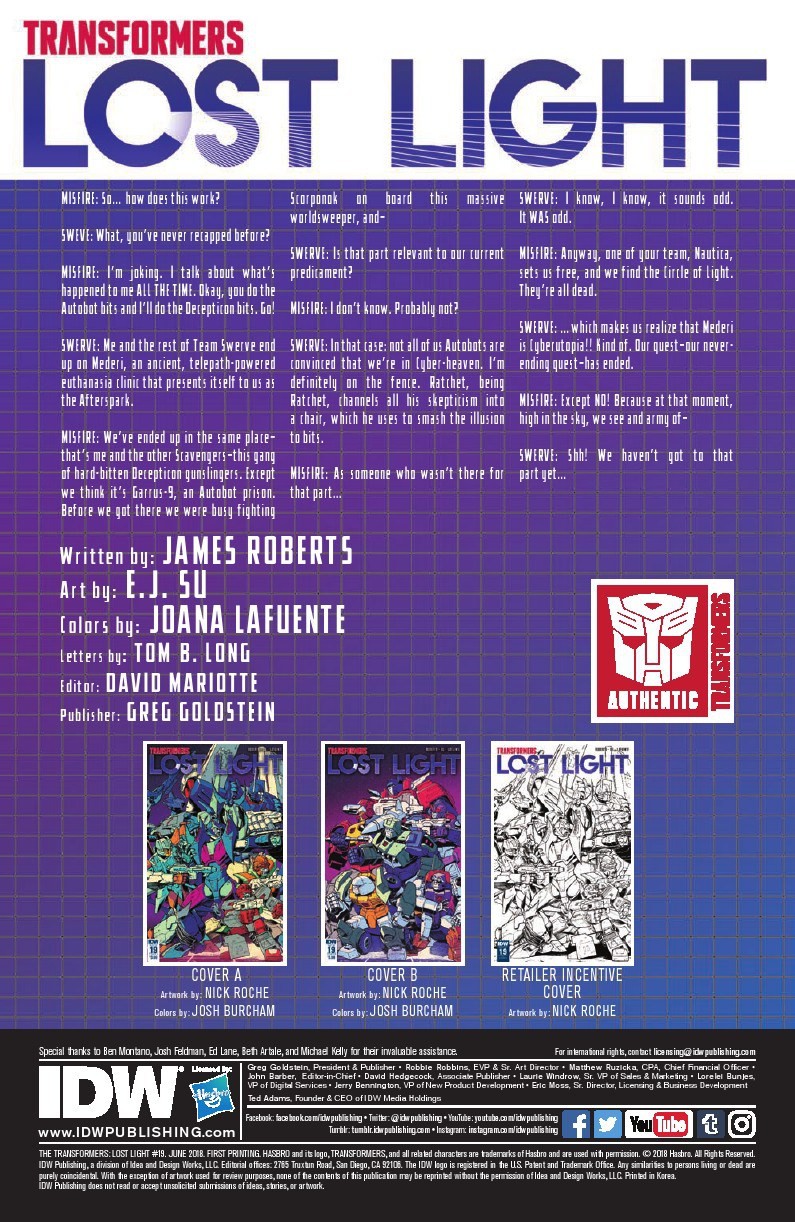 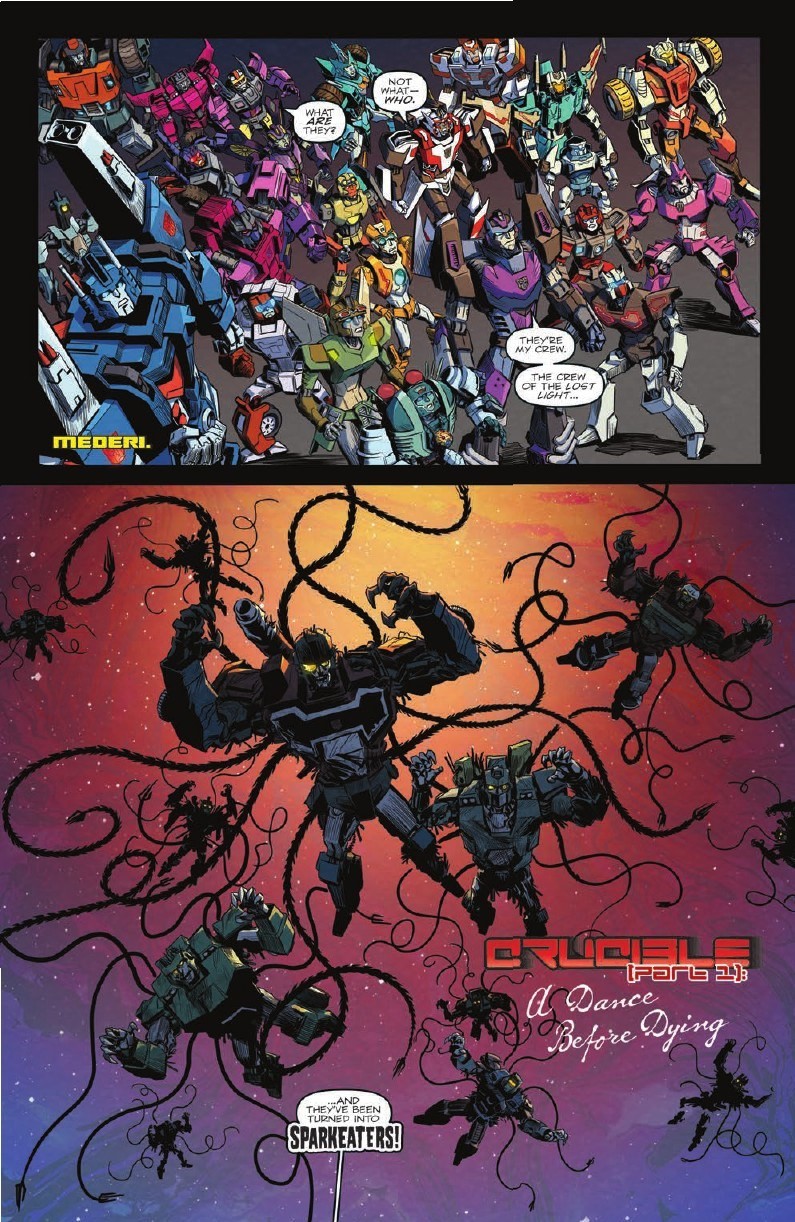 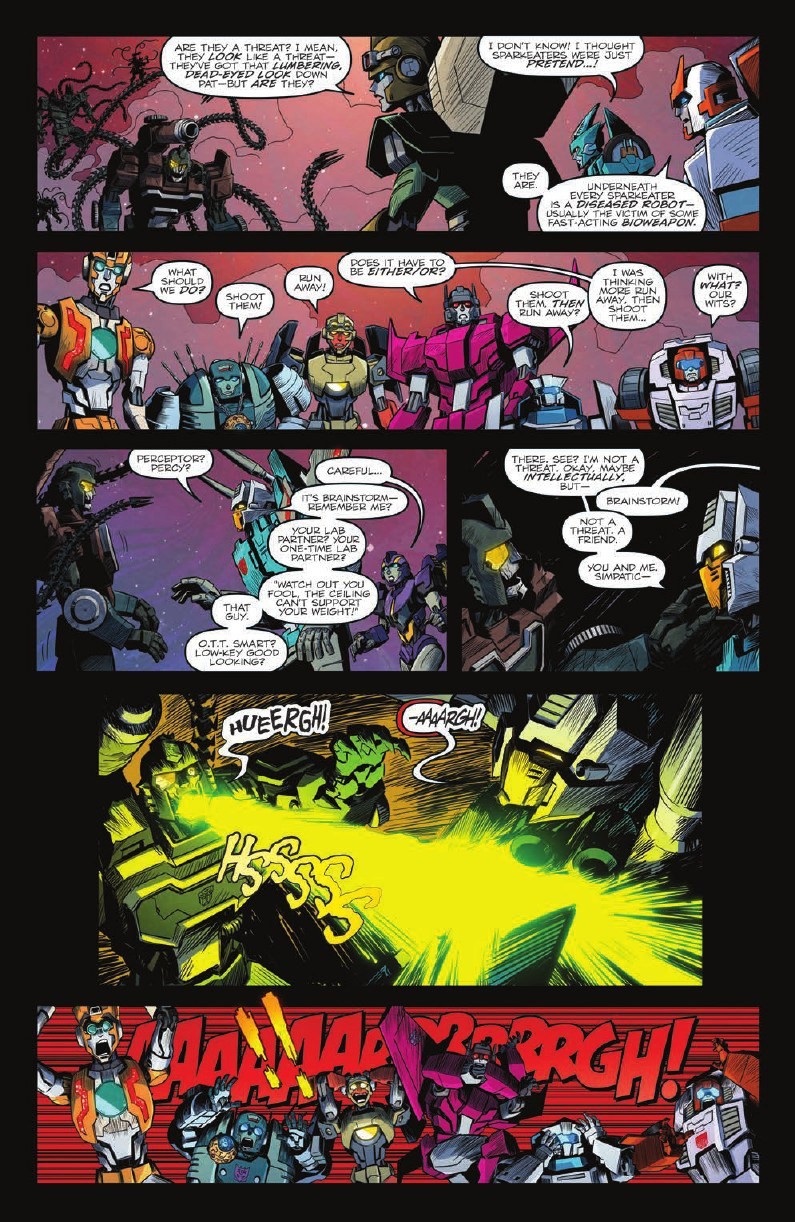 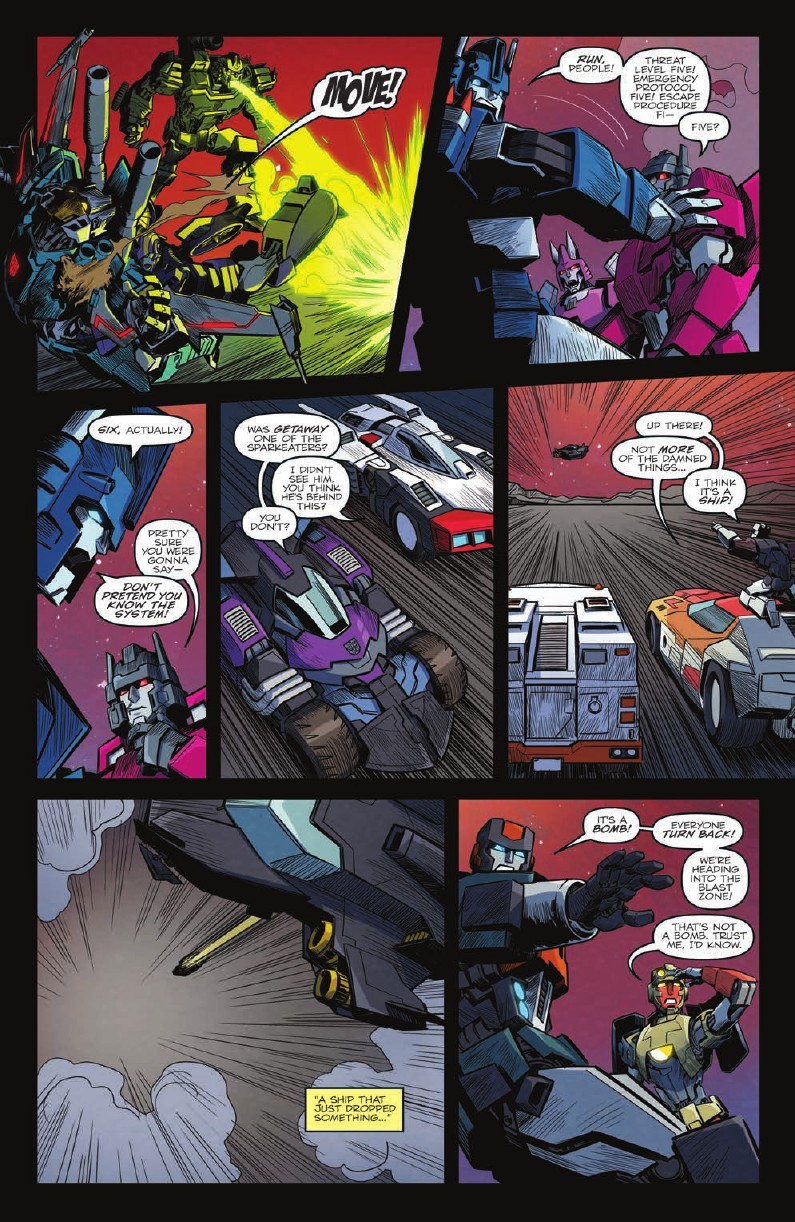 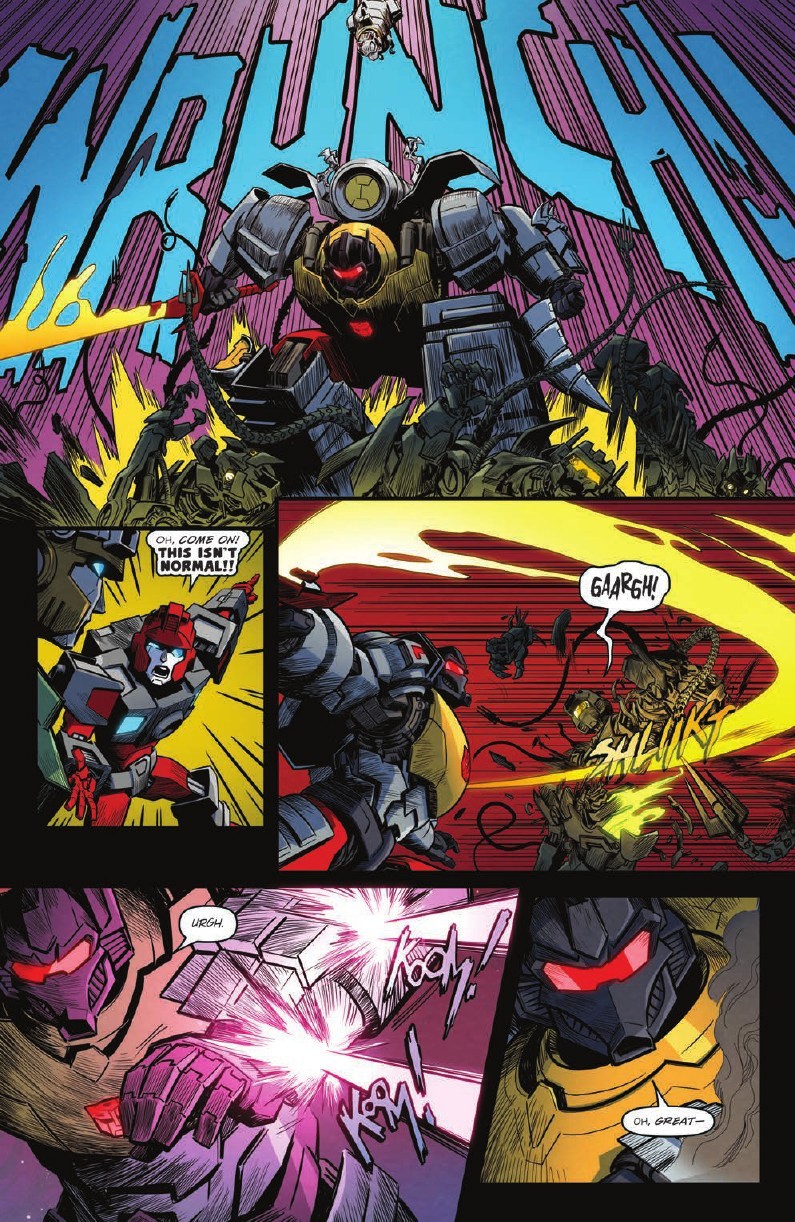 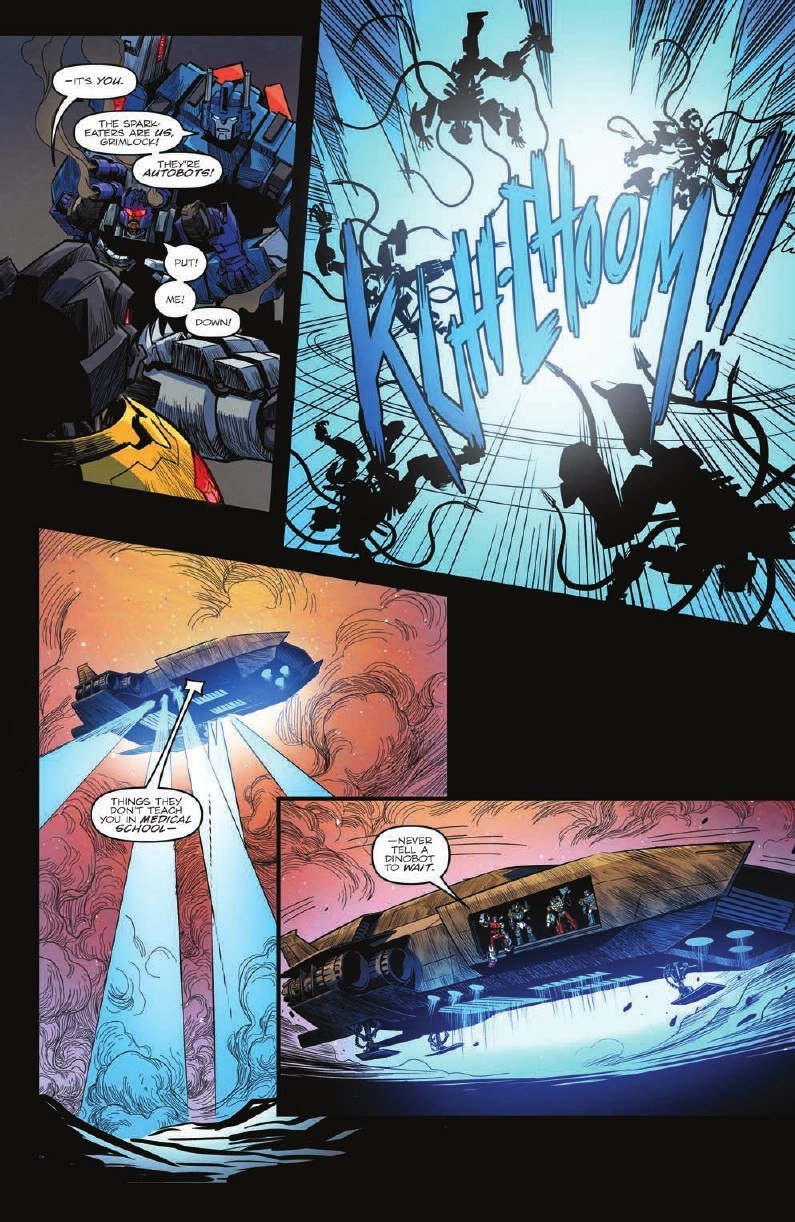 Love that last line. This one looks like it'll be fun.

BATTLEMASTER IIC wrote:Grimlock jumped off the ship in his T-Rex mode

I think a bunch of sparkeaters, and by extension Rodimus' mutinous crew, are toast. Not sure that they, especially Mainframe, can be saved.

I was going to ask if they could, since Brainstorm created a Sparkeater Gun that created the one on the LL, so maybe he has a way to reverse the effects?

And that very same section reminds me of Regeneration 1 issue 100, the whole "They're Autobots!" part and Grimlock slaughtering bots turned to monsters
Re: Full Preview for IDW Transformers: Lost Light #19 (1968576)
Posted by Va'al on July 4th, 2018 @ 1:39am CDT
Grimlock Rushes In
(Spoiler free-ish)

Synopsis
Years ago, the crew of the Lost Light fought a demonic Cybertronian mutant that fed on its victims’ souls. Years later, Rodimus and Co. are about to discover that the only thing worse than a sparkeater… is an army of sparkeaters! 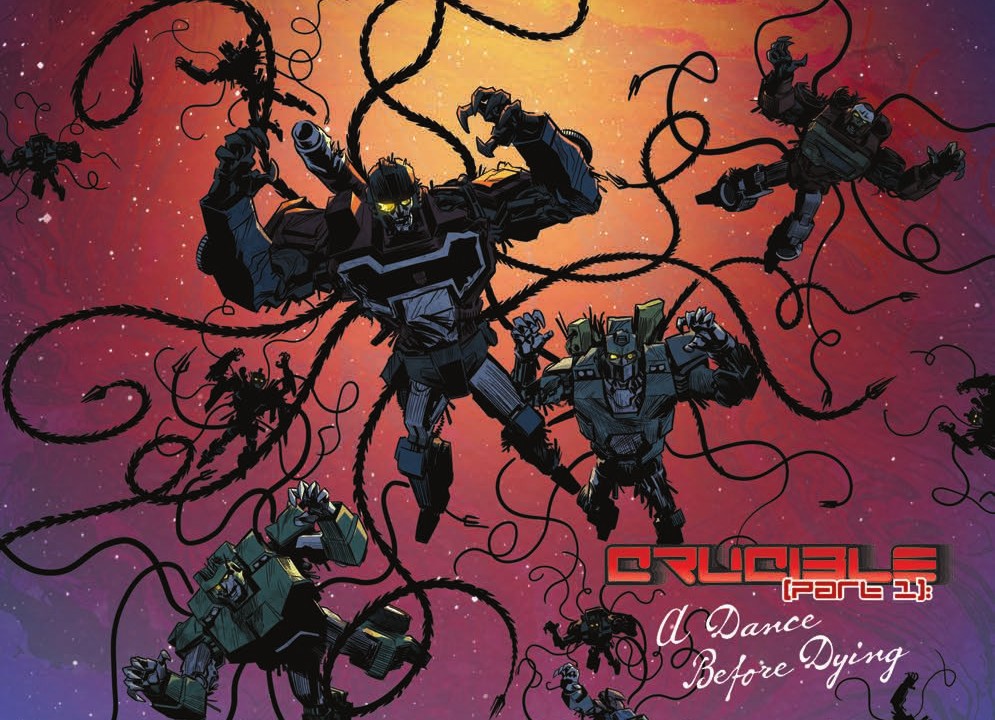 Story
Despite the scheduling issues, despite the digital vs print clashes, despite everything in-universe and out, we're here. We're actually here, at the end of The Quest, with a gaggle of questions still needing answers, and an army of sparkeaters at the proverbial door: Lost Light enters its last story arc, and we're here for it. Are you? 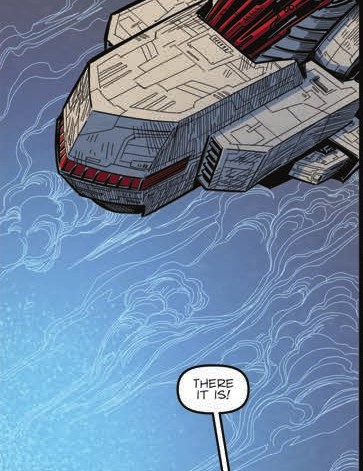 The question is obviously rhetorical, as you're reading the review - but there is a sense of dread even in the lighter moments that the comic tries bringing with the best new pairing (that was bound to happen, and now that it does, yes, very much so), hinting at several heavy moments if not in this issue then most definitely in the arc. So I ask again: are we ready? 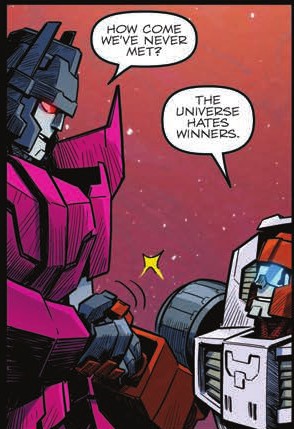 The best character and related moments that stand out, ignoring the above for one moment, have to do with the dinobot that was told to wait - and obviously will not and didn't: Grimlock. He's powerful, he's sweet, he's charming and caring, and he gave fellow staffer ScottyP a fanboy blush* during his reading of the issue. 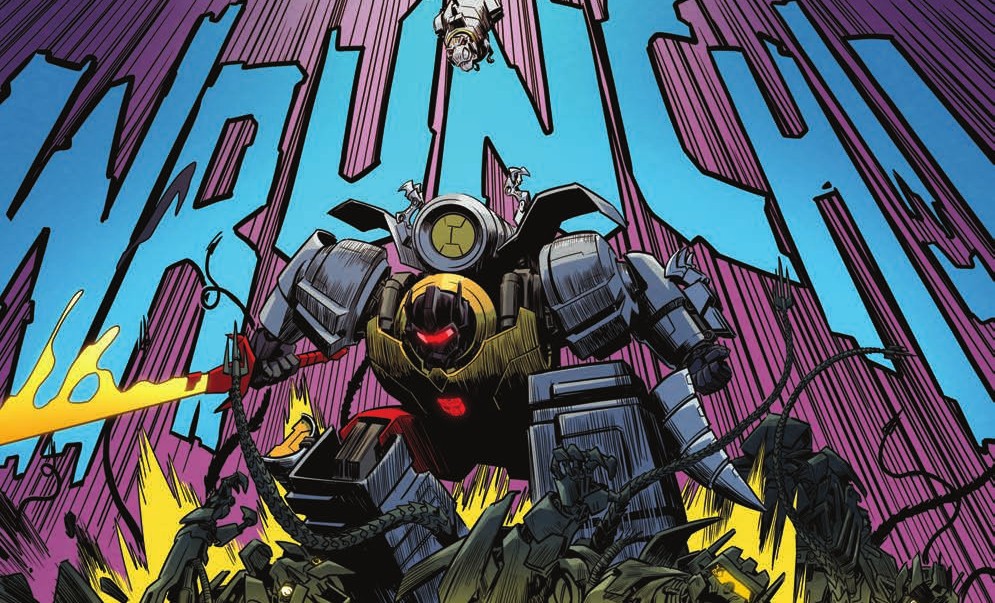 If, then, we consider all the plot propelling and thread gathering - and if this has been said before for a previous issue I realise I was very naive but we're here now - and the way in which those are done, used, and employed throughout the issue, I'll have really only one thing to say: this is very much a Roberts script, and a fine display of his skills.

Art
As we have known for a while now, art duties will be shifting across the final arc to ease the double monthly billing (ahem), meaning that we see an old flame of the Transformers comics make his return for this issue: E.J. Su! Many fans will be very pleased about this, and the lineart is indeed very very good - but I can't let one critique slide: the shading and crosshatching that shows up over a number of characters, scenes and elements of the otherwise great visual work overall, casting.. well, a shadow unnecessarily. 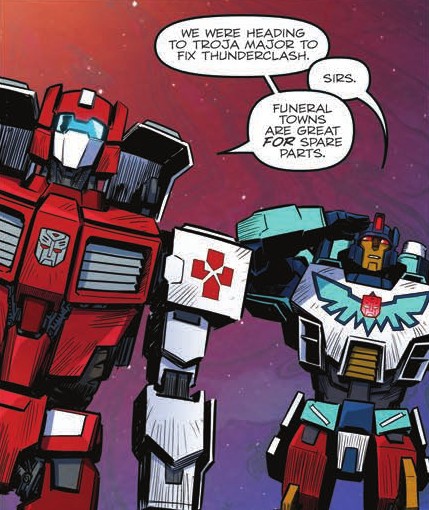 The colours provided by Joana Lafuente do attempt to ease some of the scratchier, more jarring linework, but with a base so dark already, even her impressive skills at keeping visual continuity and coherence with the regular art seen so far in the book cannot mask what can result very distracting indeed (see above for example).

Again, letterer Tom B Long ensures not only that the pacing of the interactions hit their mark, but also takes clearly a lot of pleasure and fun in some of the louder, wider pages of action and noises, with some of the best screams and KRUNCHes that I had seen in the series so far (see above!).

The main cover art, featuring Nick Roche and Josh Burcham displaying Team Rodimus ready to face whatever is thrown their way, is darkly mirrored by the duo's own counterpoint offered in the variant you can see in the thumbnail - and also found in our databse entry here - the two sides that used to be one has to tug at someone's strings hard.

As I said in my opening remarks: we're here. And so is everyone else. Something that Roberts has unmistakenly been able to do since his first appearance as an official writer on the IDW comics, has been to seed (or retroactively make it so) plot points and details for the reader to almost entirely forget before bringing them back for a wider tapestry. And in this final arc, that skill is turned up to what seems to be at least a 12 - here's looking forward to a satisfying landing, with a run-up this sizeable.

All in all, it's a number of a series that will confirm to be liked by most readers who enjoy this style of script, will bring in fans looking for some official EJ Su Transformers artwork (my caveat above remains), and will not be liked by those who dislike the narrative techniques deployed in MTMTE and LL so far.

It’s a bit predictable but that’s been LL for a while. I said the crew were the sparkeater army, Getaway and starsaber were more than likely the only ones not turned and Tyrest would be coming back as one of the Grand Architects lieutenants but I’m not gonna praise me figuring it out. There’s just loose ends and when you’ve only got 7 issues left it’s been easy to see what’s coming in sorts.’

No I liked this issue. It’s amping up. Wonderful to see EJ back and doing art. It may be more appropriate for OP but I’m just happy to see him back in transformers.
Re: Full Preview for IDW Transformers: Lost Light #19 (1968631)
Posted by D-Maximal_Primal on July 4th, 2018 @ 9:35am CDT
"Mutineer 1 and Mutineer 2, I'll get to you later" or something like that

I'm loving so much of where this is going. Though I'm hoping Thunderclash finally gets to shine. The guy has been stricken with an Illness, turned inside out, and cleaved in half. I want to see him finally live up to his rep.

Also I didn't expect to see Sporponok show up again. His and Rodimus's rematch should be interesting.
Re: Full Preview for IDW Transformers: Lost Light #19 (1968653)
Posted by Randomhero on July 4th, 2018 @ 11:53am CDT
That’s the point. Thunderclash is a joke. He’s Ace Rimmer. Everyone talks about how amazing he is but you don’t see how great he is. He is literally a gag character.

you don’t see it either?! WTF!? It’s not on the board but it’s on the article! I thought it was glitchy or something on my end! Go to the article on the site, not the board user ishin ookami has a post that Thunderclash and Scorponok.
Re: Full Preview for IDW Transformers: Lost Light #19 (1968660)
Posted by ZeroWolf on July 4th, 2018 @ 12:52pm CDT

you don’t see it either?! WTF!? It’s not on the board but it’s on the article! I thought it was glitchy or something on my end! Go to the article on the site, not the board user ishin ookami has a post that Thunderclash and Scorponok.

Well that's weird. You're right, it's there but not...

you don’t see it either?! WTF!? It’s not on the board but it’s on the article! I thought it was glitchy or something on my end! Go to the article on the site, not the board user ishin ookami has a post that Thunderclash and Scorponok.

Well that's weird. You're right, it's there but not...

He's a brand new user, his forum post hasn't been approved yet. Burn or another mod will approve the post as soon as they are on. I can see it on here because I'm staff, so I do know it's here.

As for why it's visible on the front page, that's weird. But the swear filter doesn't work and lots of forum pics don't show up either, so there is that.

Also, wonder if Cyclonus is gonna take on just Star Saber and Rodimus the other 2? Still really hoping Getaway gets a triple pipe blast to the brain
Re: Full Preview for IDW Transformers: Lost Light #19 (1968686)
Posted by ZeroWolf on July 4th, 2018 @ 3:10pm CDT
I see, thanks for the explanation d-max

as for getaway...death is too good for him, I really hope he breaks down and realises he's beat by someone better than him.
Click here to view additional comments about this topic at the Energon Pub Forums ...