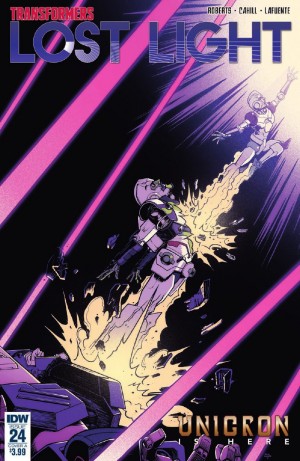 We're nearing the end of this type of post, but for one more month at least, we have the full preview of this week's IDW Publishing Transformers: Lost Light issue - issue 24 in 25 - and there are some minor spoilers for the book and the resolution of what we're about to see as it's fully released.

Check it out below, mirrored courtesy of Comics Crusaders, as Brendan Cahill returns once more on main art, and Nick Roche / Josh Burcham start the chestbursting, with feels, from the very first cover page.

Only two issues left! Closing a story six years in the making! Don’t miss the B cover by beloved Transformers artist Geoff Senior! 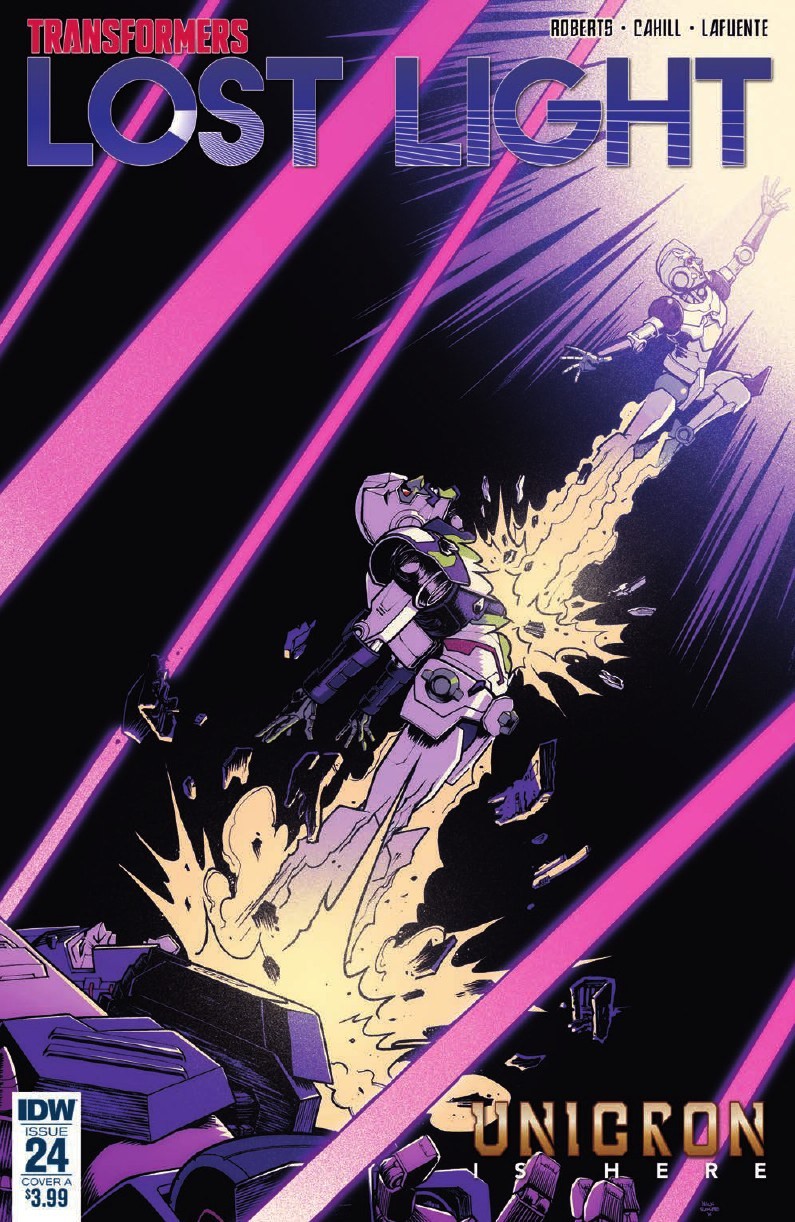 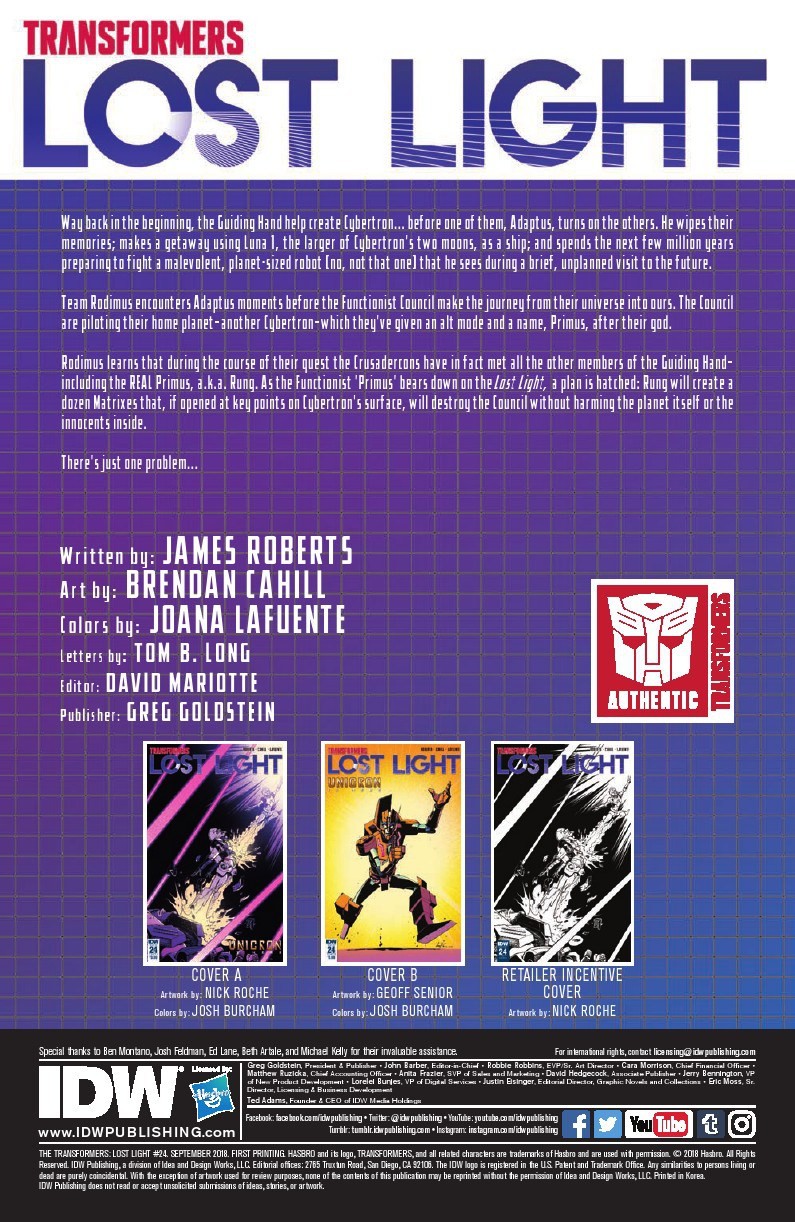 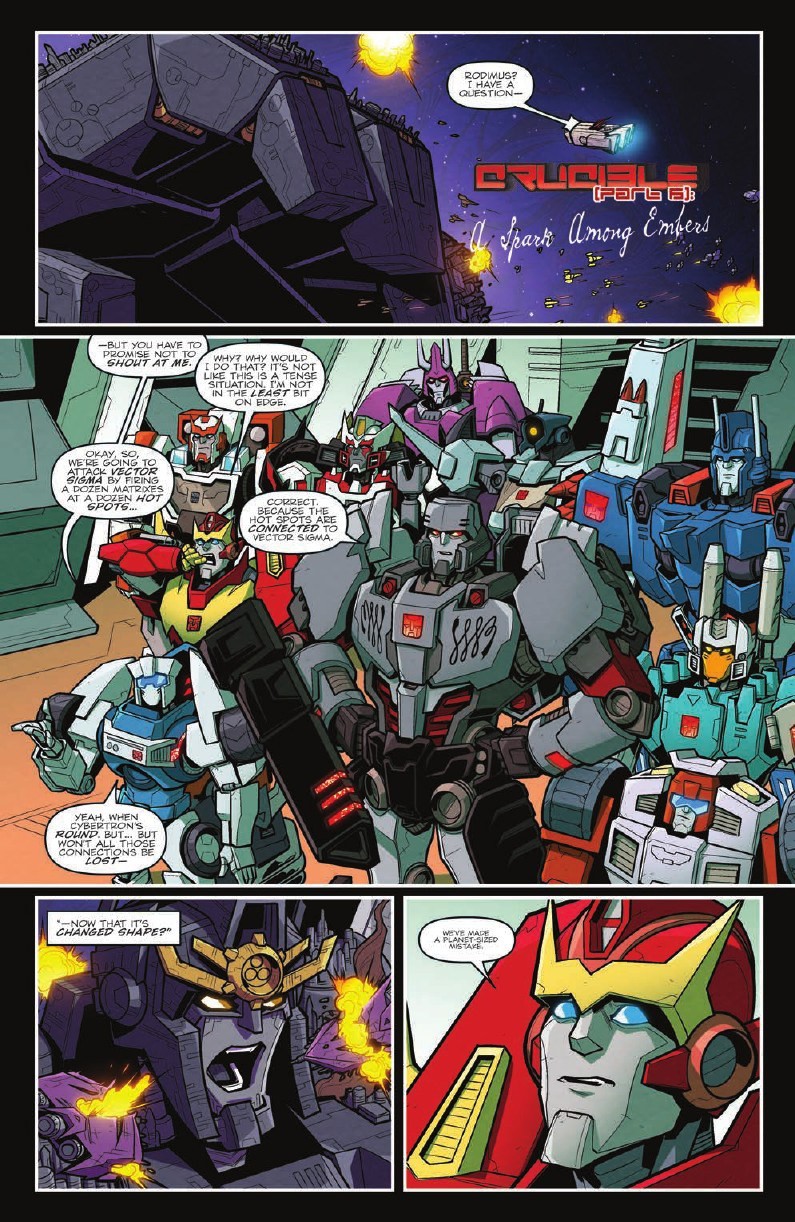 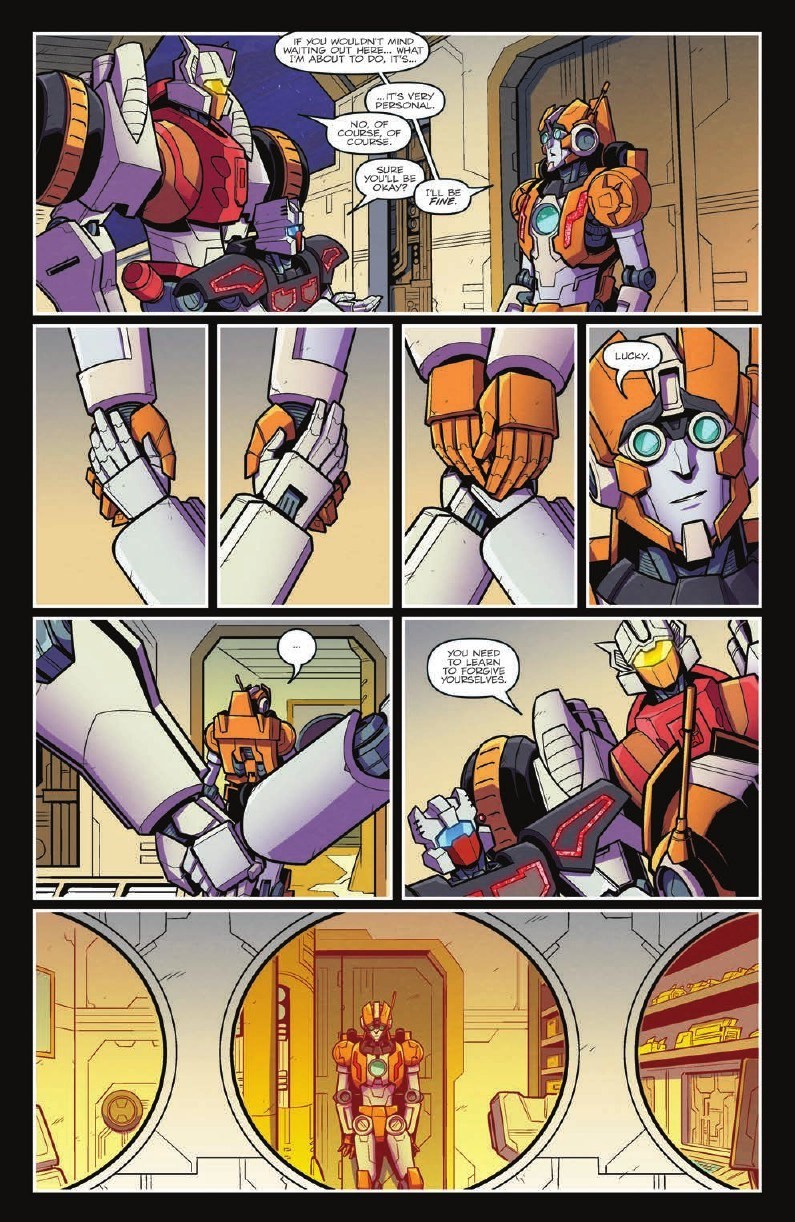 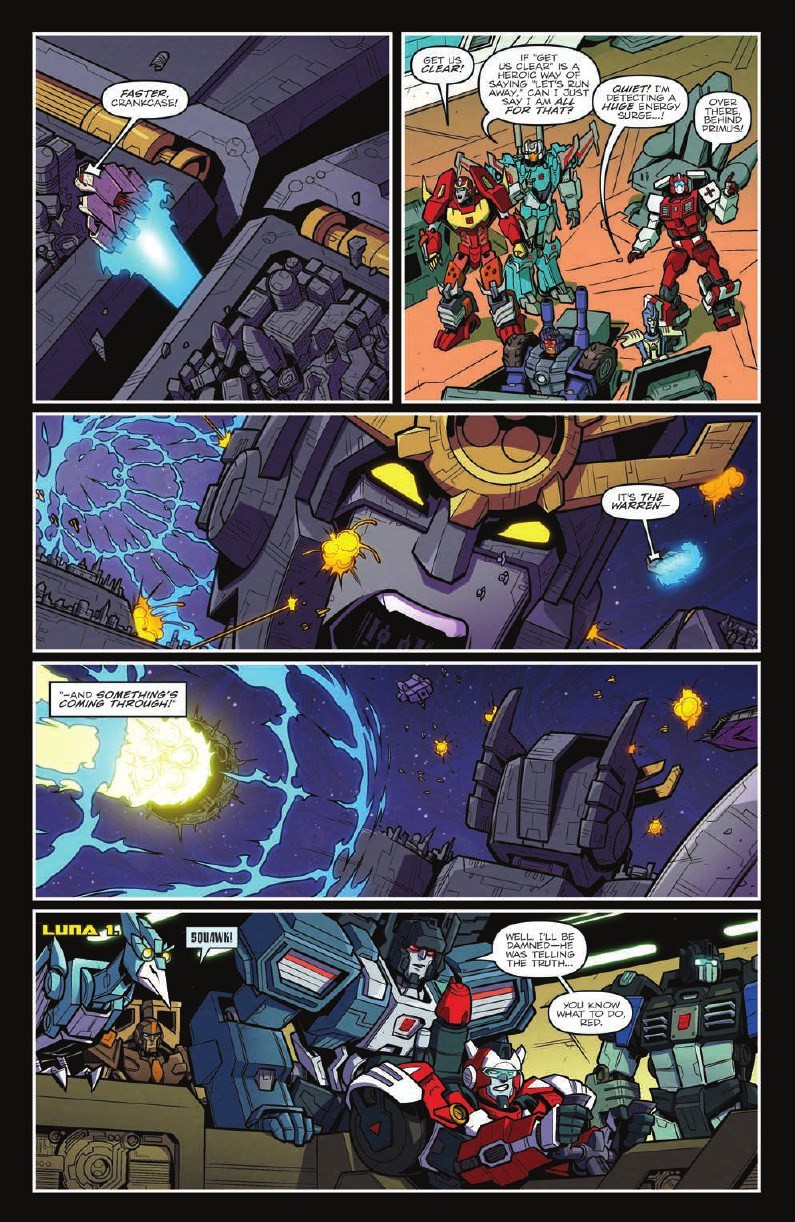 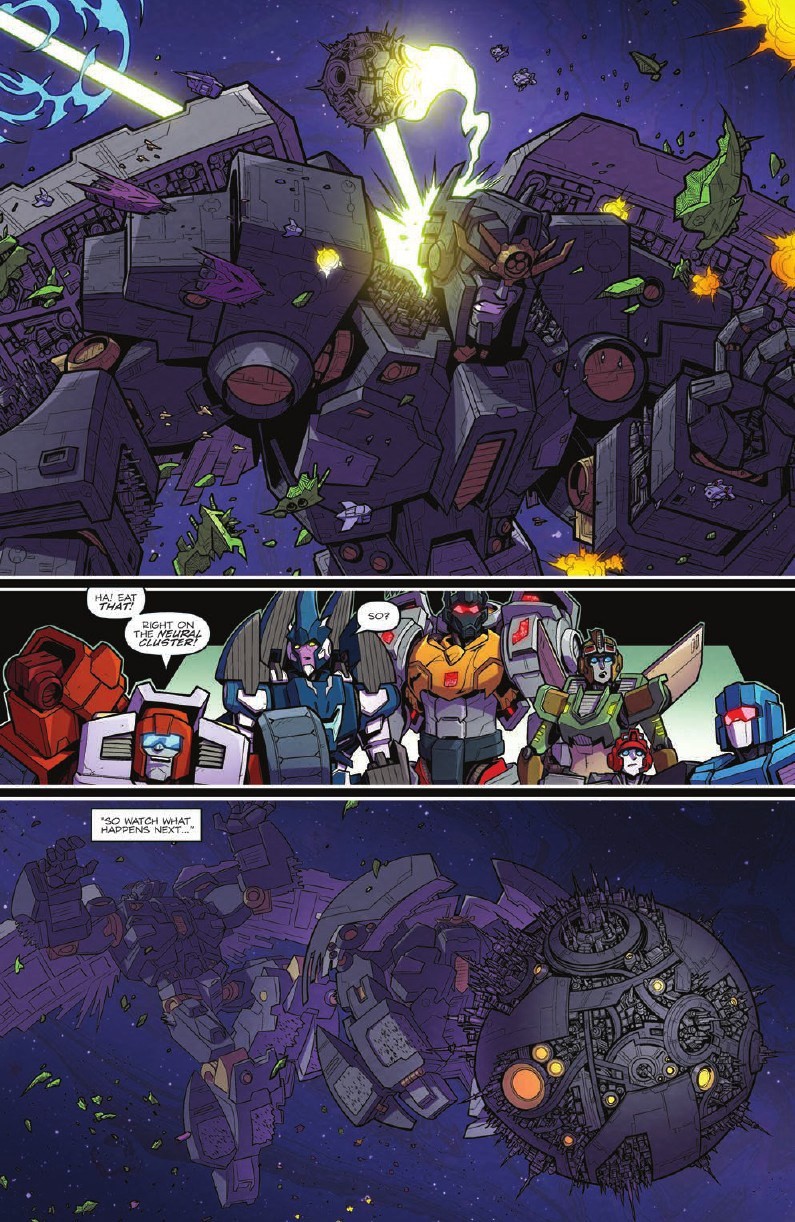 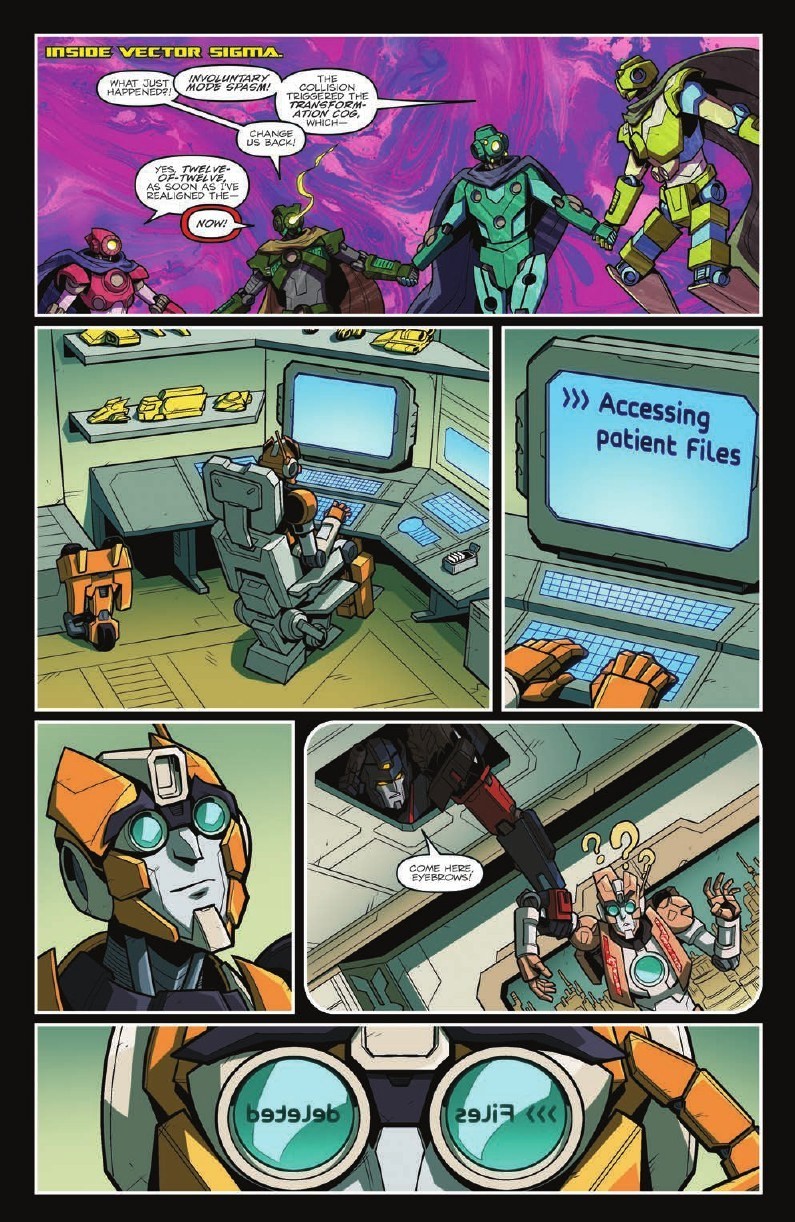 Flashwave wrote:Oh MY DEAR GOLLY GOD They are gonna conk "Primus" on the back of the head and induce Transformation straight out of the MTMTE comic with a drunk Ultra Magnus... Barber has this story more interconnected than the MCU and I love it, but God is that man a scary master manipulator

If that is what happens, you sir are a genius. I would not have thought of that.

Rung remembering how he and Skids first met.

The memory was of Skids pulling Rung away into the vent system when he was first attacked by the sparkeater in MtMtE issue 3.

Rung and Skids first met in issue 2. He's the one who mentioned the Lost Light was on a quest. (With Swerve offering a bit more "detail" such as the "infinity gate"

Patient files are a bit different than personal memories. Then again, the two were friends.

Synopsis
All they wanted was an adventure. Now, as worlds turn to dust and every sacred truth is undone, as everything they’ve run from catches up with them and every gruesome future comes to pass.

Only two issues left! Closing a story six years in the making! Don’t miss the B cover by beloved Transformers artist Geoff Senior!

Story
This is it. This is the end. Almost, I know. But this is the end. This is the flash before the finale, and everything we've seen in a long series, with stories starting all the way back in the first Chaos seeds reaching some kind of conclusion, before they actually conclude next issue, and attempting some form of closure. Starting with gods and life.

A first warning: if you're expecting a big action scene, or even a series of action scenes, how are you still living in denial with Lost Light? There is plenty of action, of course - they're fighting a planet from a planet, one which is also a giant robotic being powered by bigoted spite - but James Roberts' strength is still in the smaller moments between characters. Those, in this issue, abound. 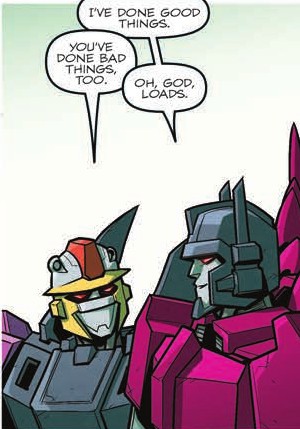 Where previous attempts at balancing heartfelt, passionate dialogue/monologue during action have been admittedly questionable (at least in terms of pacing), this issue seems to have found the better solution - tonally, pacing-wise, structurally - to weigh out the different aspects to telling this type of ending, using strengths and weaknesses alike.

Brendan Cahill returns for the issue, after we last saw him in #22, and whatever he's been doing in the meantime has only made him more powerful. The issue contains some of the most tender and heart-rending moments for pretty much the entirety of the cast present in its pages, and Cahill's art has been able to work all of the right emotions into the motions, the gestures, the silent panels, all while keeping giant Functionist Primus in the peripheral vision of it all. 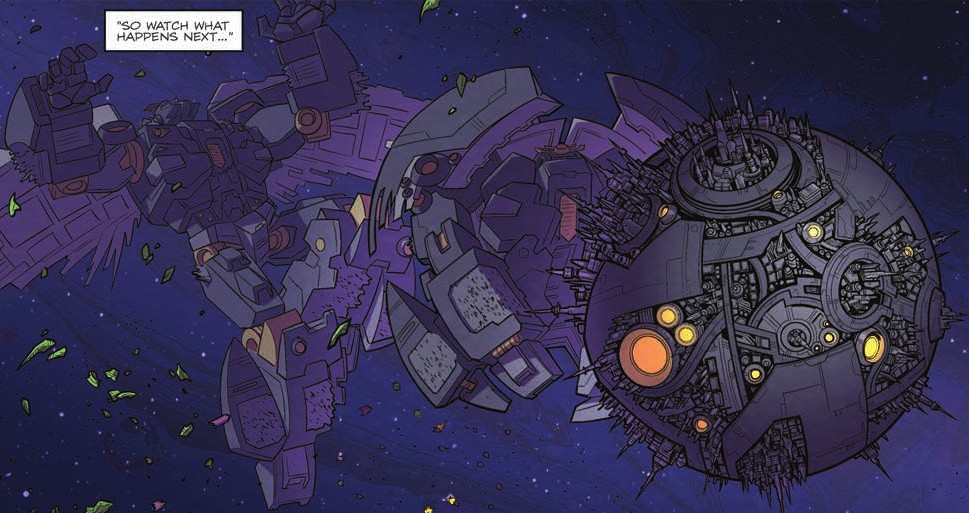 Take a load of this, too

And Joana Lafuente has made sure that the peripheral vision is something no one can ignore, be it explosions, sudden changes in light sources and direction, mood flickering, tone shifting, crucial moments and smaller, tender interactions - the light and colour fit all, snugly, and just right.

it's really hard to spotlight this without spoilers

It's almost impossible to distinguish Curtis and Tom by now, and if you're not in on the joke, please bear with me - but what Long is managing to do with fonts is truly impressive, given the already emotional charge of pretty much everything else in the visual aspect of the book.

All the covers, as usual, can be found in our Vector Sigma Database entry here, though the one spotlighted in the thumbnail is once more the Geoff Senior / Josh Burcham variant featuring Rung himself, for once taking charge of the situation - almost like Rodimus.

And so, where do we stand now? This is the finale, no matter what the next issue decides to conjure up in its denouement, and as an ending it fits everything that the creators have set up from the start - sometimes literally, sometimes thematically - and it will definitely leave an impact on readers and TF lore (here's hoping, at least), for the principles and themes if not the execution. 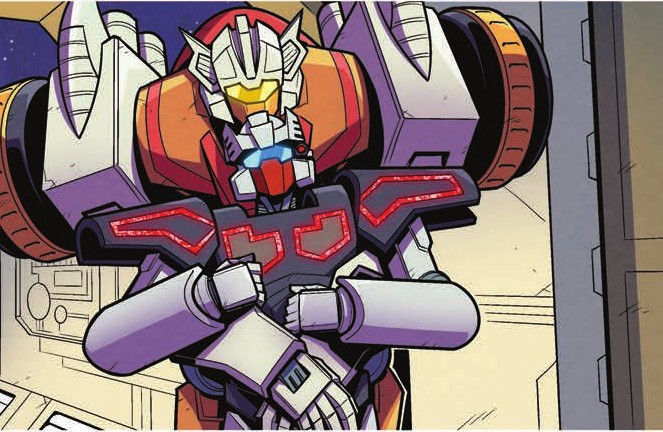 Does it cancel out my troubles with the series up to now? No, but I don't think anything will. What it does do is sidestep to tell a wider story that no longer focuses on the alleged main characters, while also focusing on those very same characters - from Team Rodimus to Megatron's AntiVocationist League, to the Scavengers and more - in a way that we may have expected after all, and reminding us very much so of the influences, the setting, and the lineage of this type of story, and of Transformers as an icon.

Despite some minor issues, to me MTMTE/LL still puts most of the previous comics, TV cartoons and ALL of that Bay crap to shame.

I can live without Barber's ongoing but Roberts work will truly be missed.

Rodimus Prime wrote:So if Rodimus used the Warren to send the message back into the past, can't they use it to travel to the Unicron story's time and join the fight?

Rodimus Prime wrote:So if Rodimus used the Warren to send the message back into the past, can't they use it to travel to the Unicron story's time and join the fight?

Are they even aware of Unicron?

Or at least not yet.

If Unicron really does want to wipe out Cybertronian life, maybe they're on his clean-up quest list?

With one issue left I don't know how to feel about it. On one hand, "Primus" vs Unicron yes please, on the other, is there time for that now?
Re: Full Preview for IDW Transformers: Lost Light #24 (1986173)
Posted by ZeroWolf on September 26th, 2018 @ 10:55am CDT
Honestly if they pulled Primus vs unicron now it would feel cheap, there's two issues of unicron left and op 25 to provide closure. A fight like Primus vs unicron needs build up, something they just don't have and would cheapen everything. Best save it for the next contuity