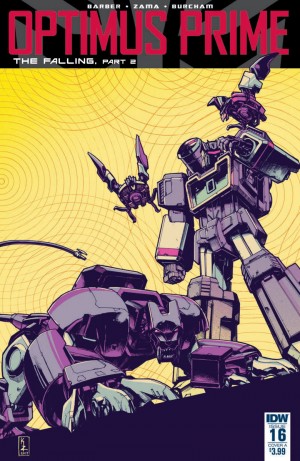 The first of the previews coming to us from a number of comics media sources, for comics due out next week from IDW Publishing is via Newsarama, and featured the next chapter in the ongoing Transformers series Optimus Prime, and the second part of The Falling arc. Check it out below, as Soundwave takes the POV for the issue, and join the Seibertron.com discussion inside!

When Starscream tells you "good luck," you know things must be bad. Check out this preview of next week's Optimus Prime #16. 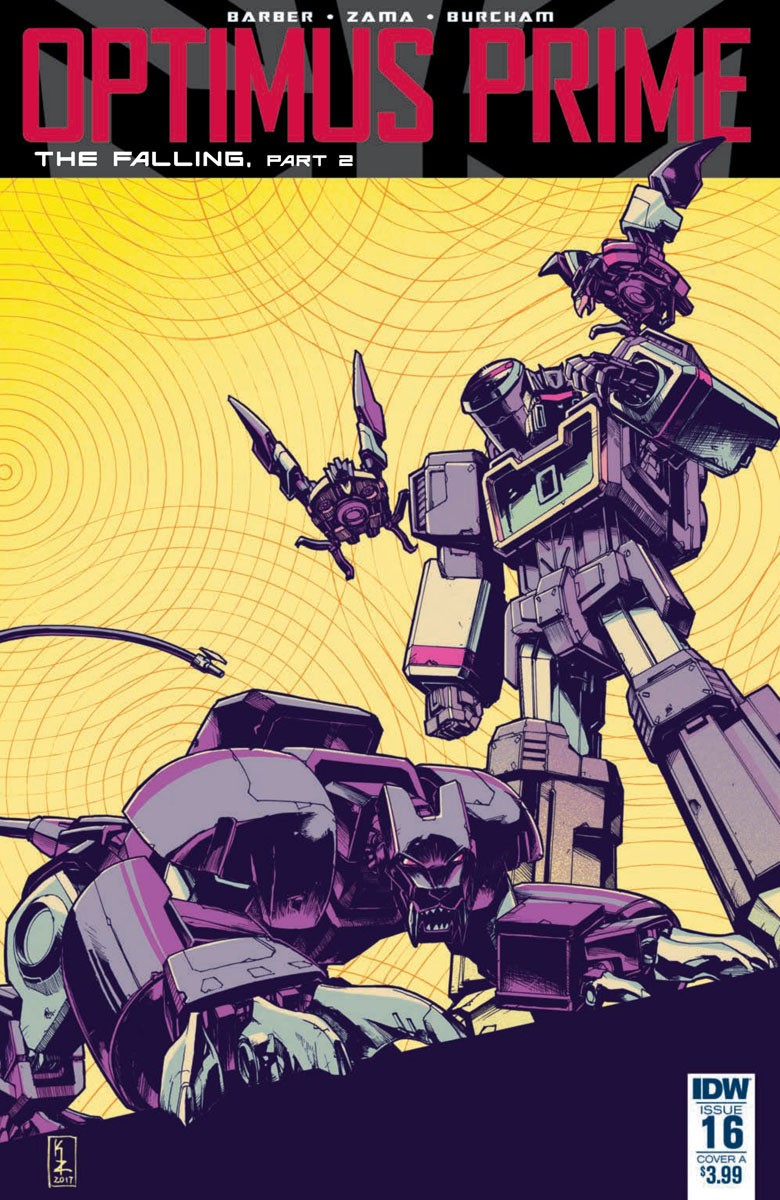 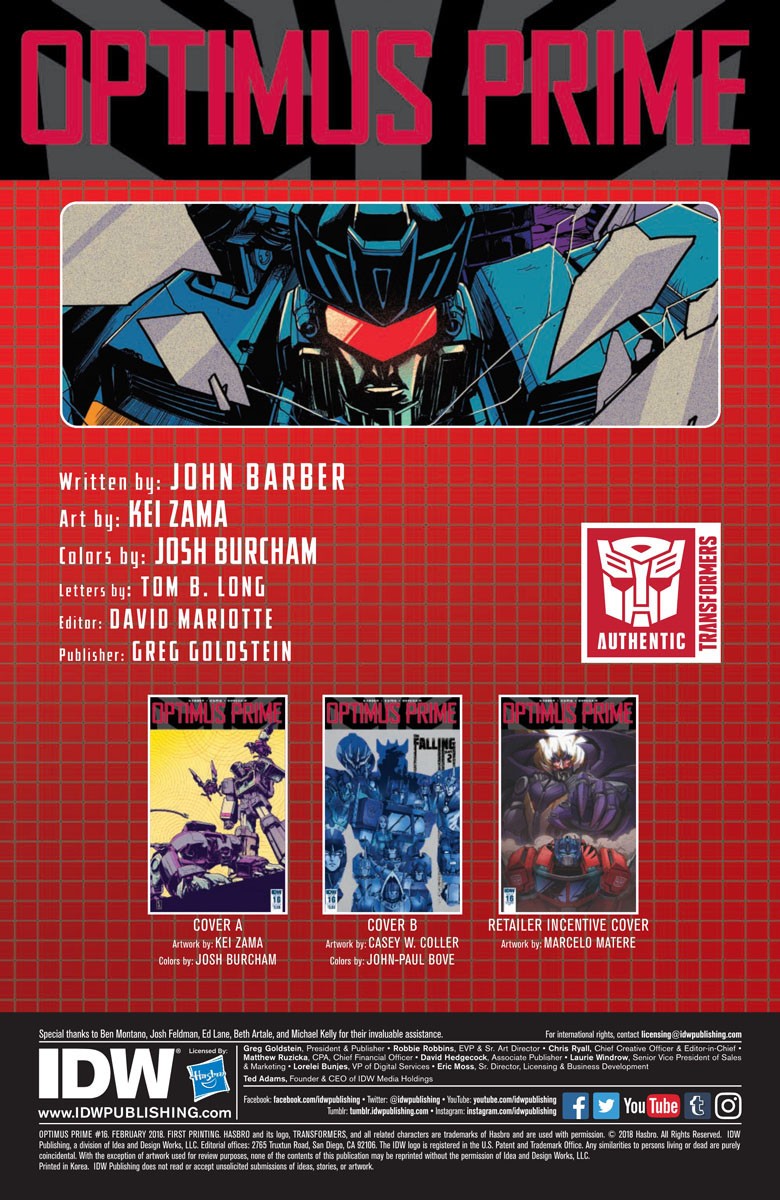 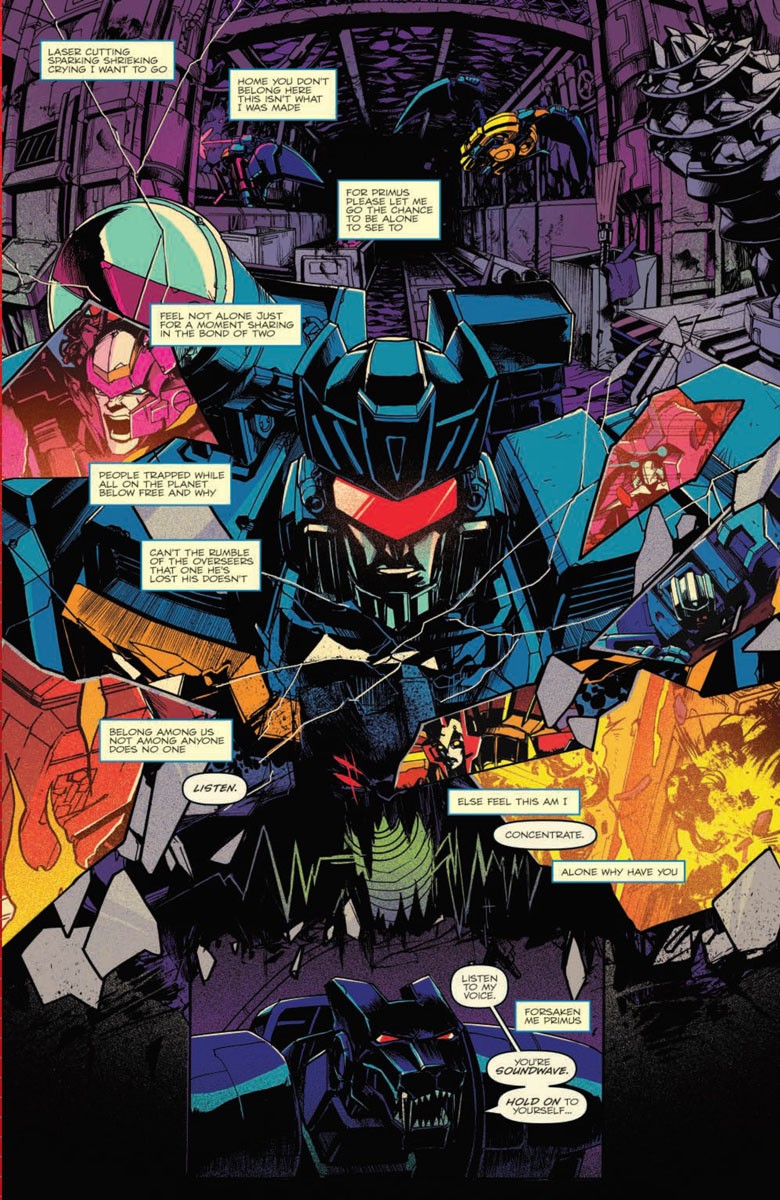 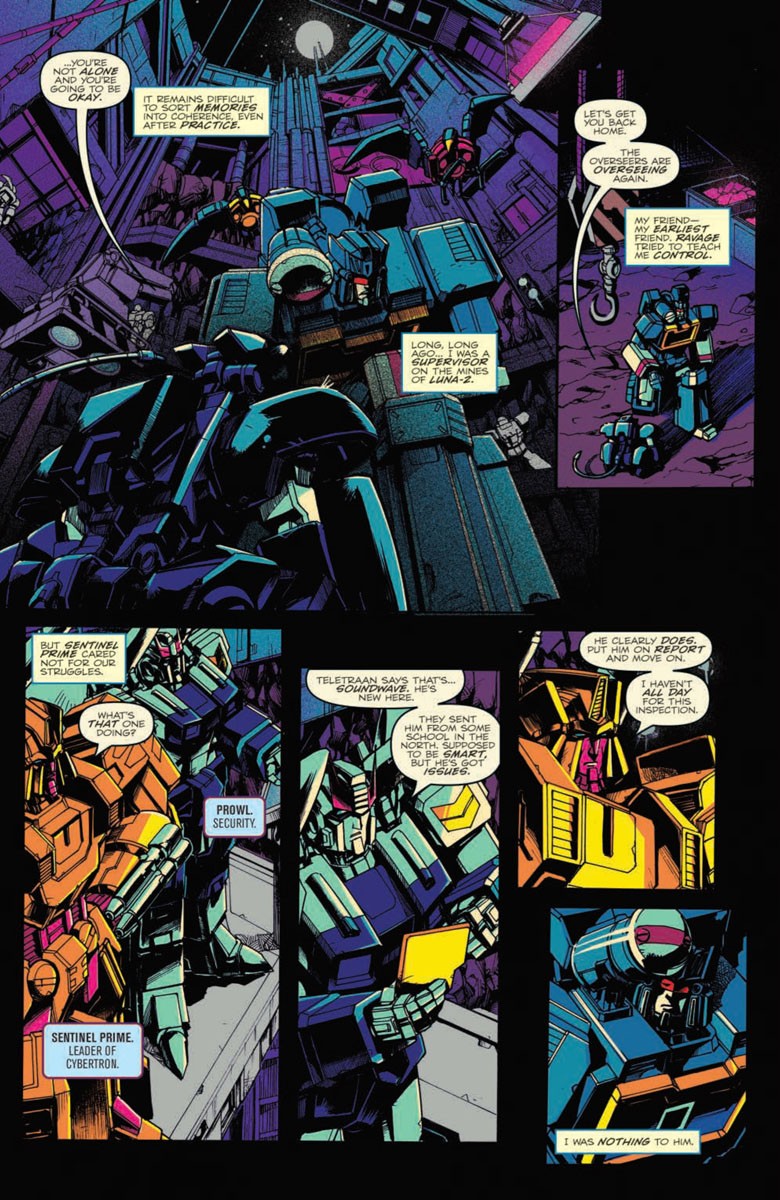 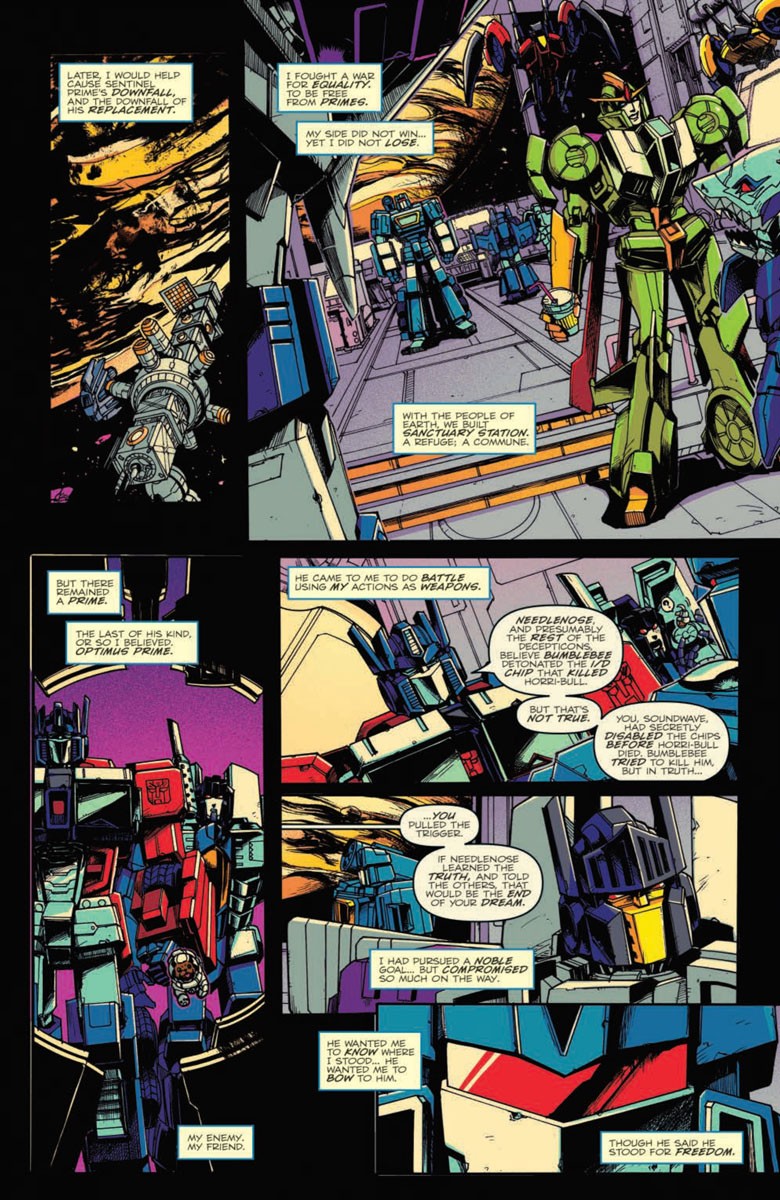 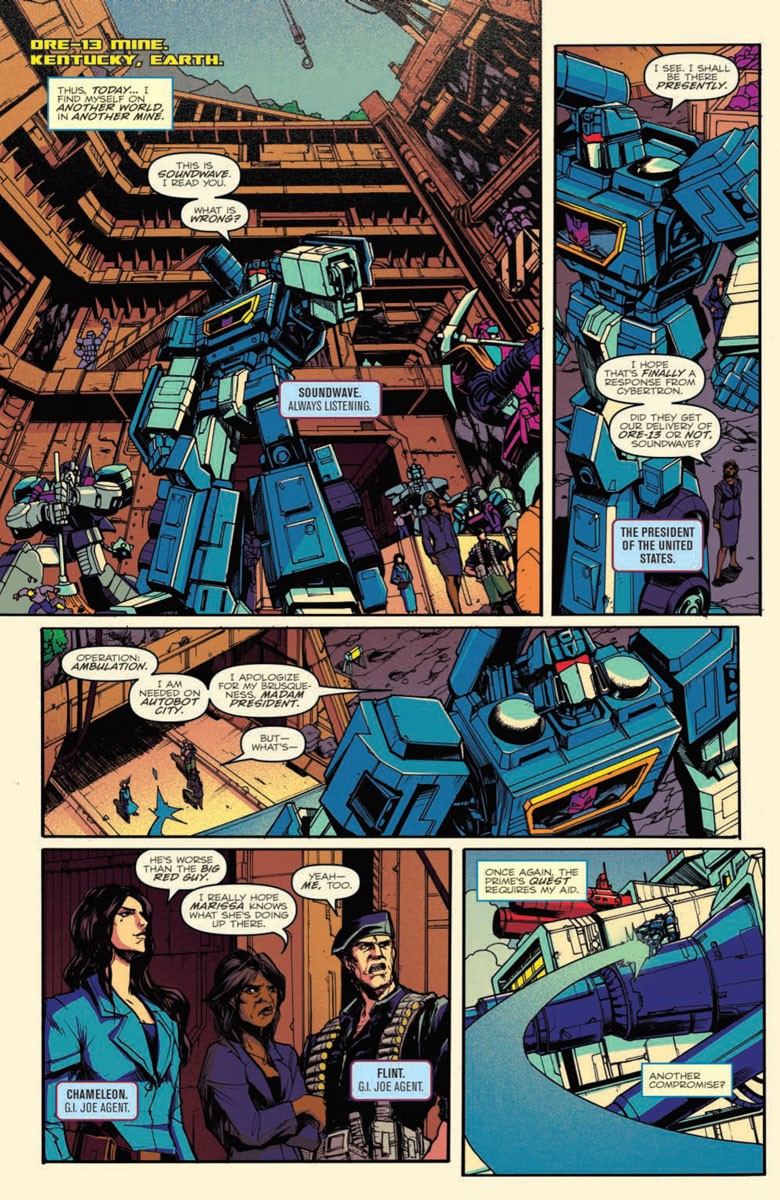 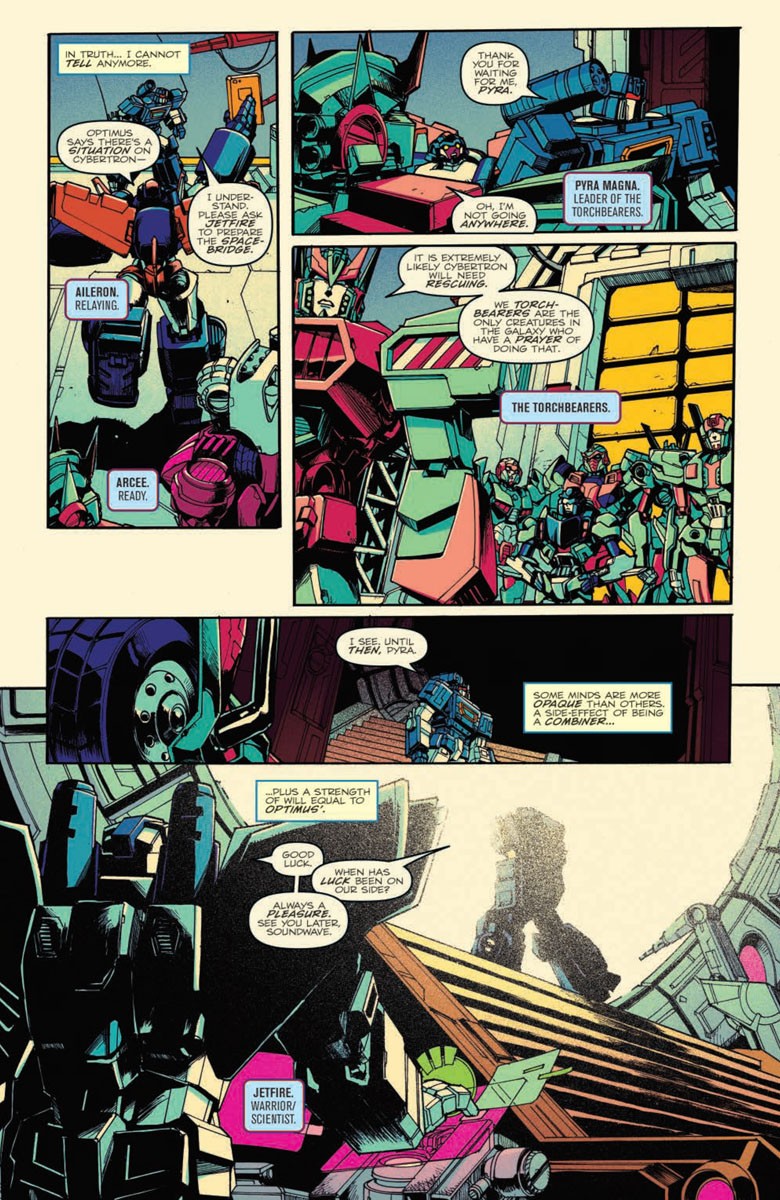 THUNDERCRACKER IN: STARSCREAM: THE MOVIE!

The good news: somebody finally gave Thundercracker money to make a film. The bad news: it’s Starscream, and he wants a biographical picture to win over the people of Earth. Will Thundercracker stand by his principles or… well, no, he makes the movie. 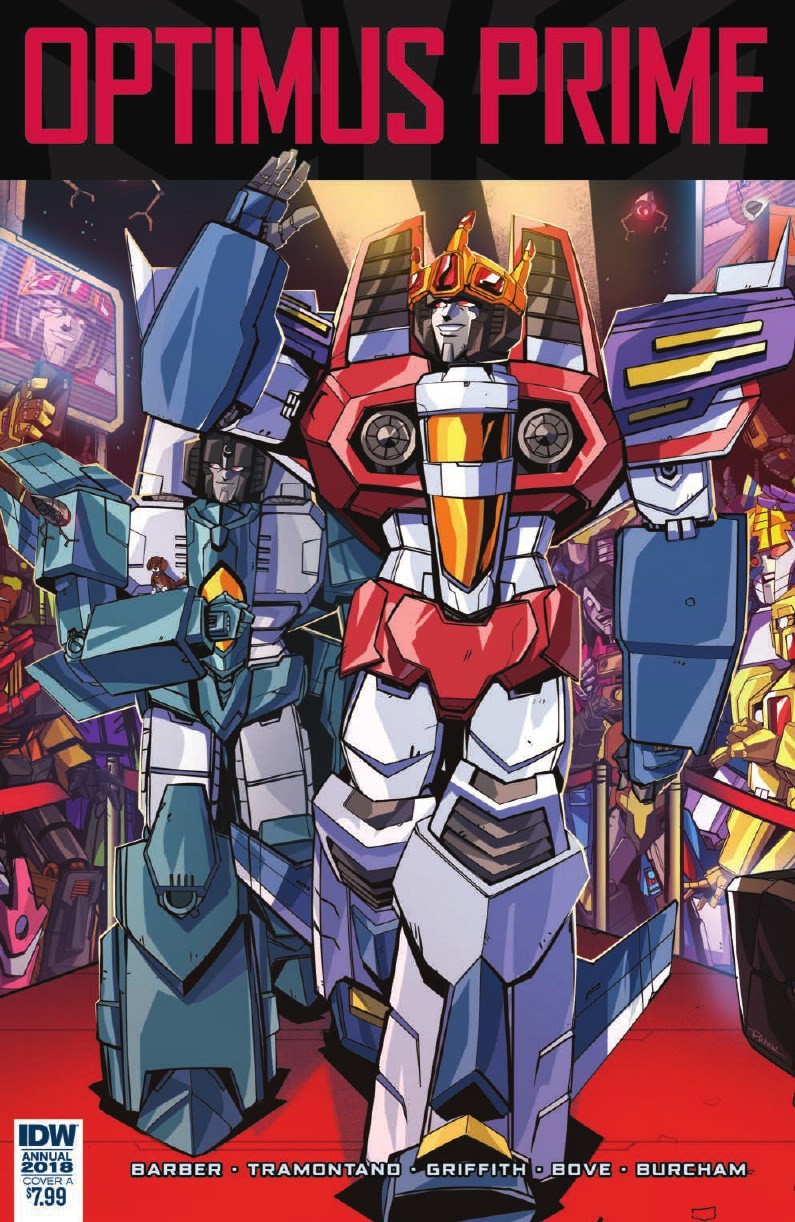 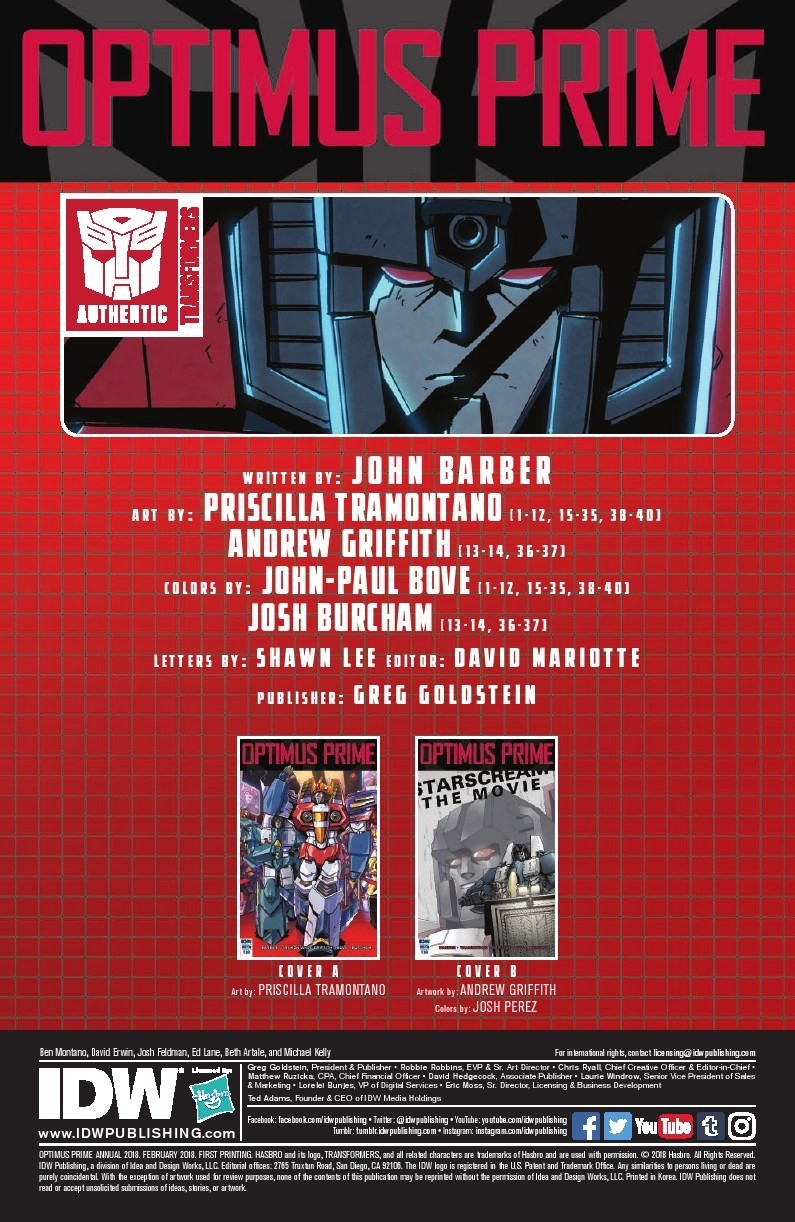 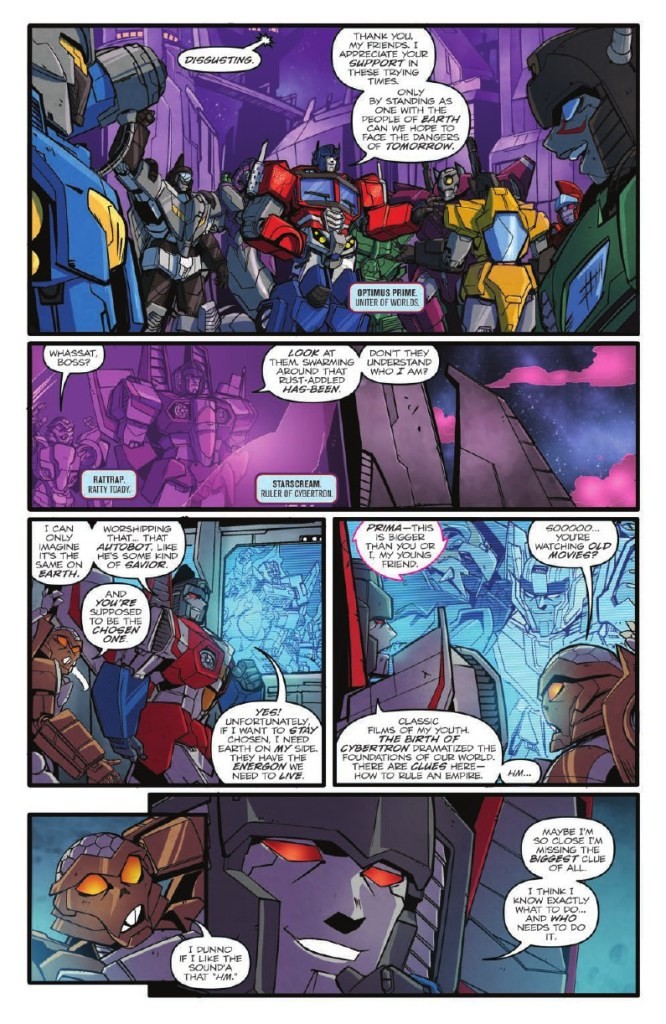 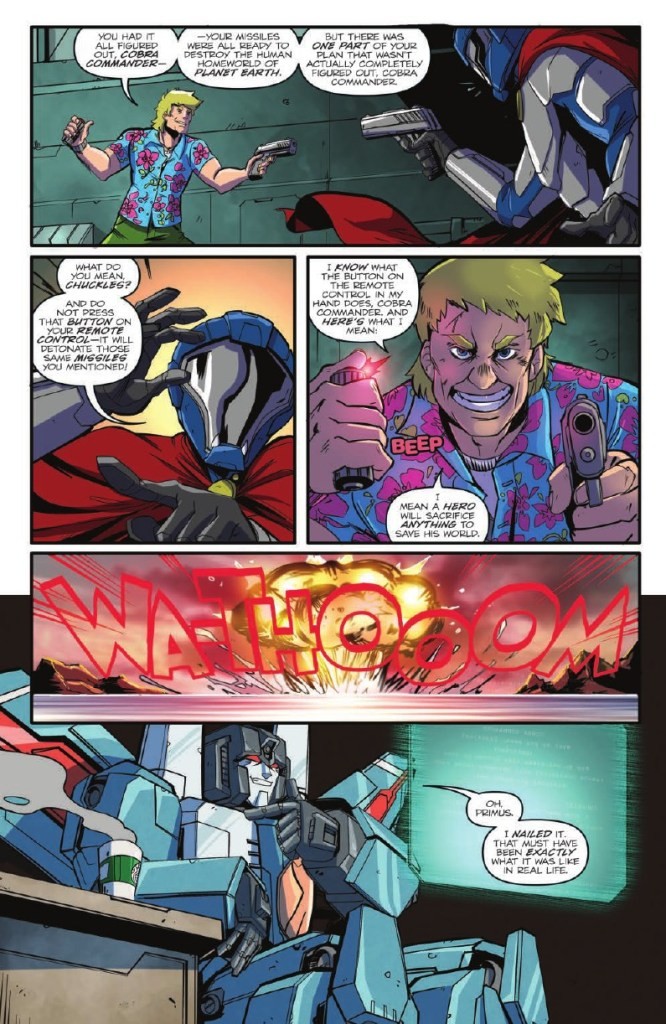 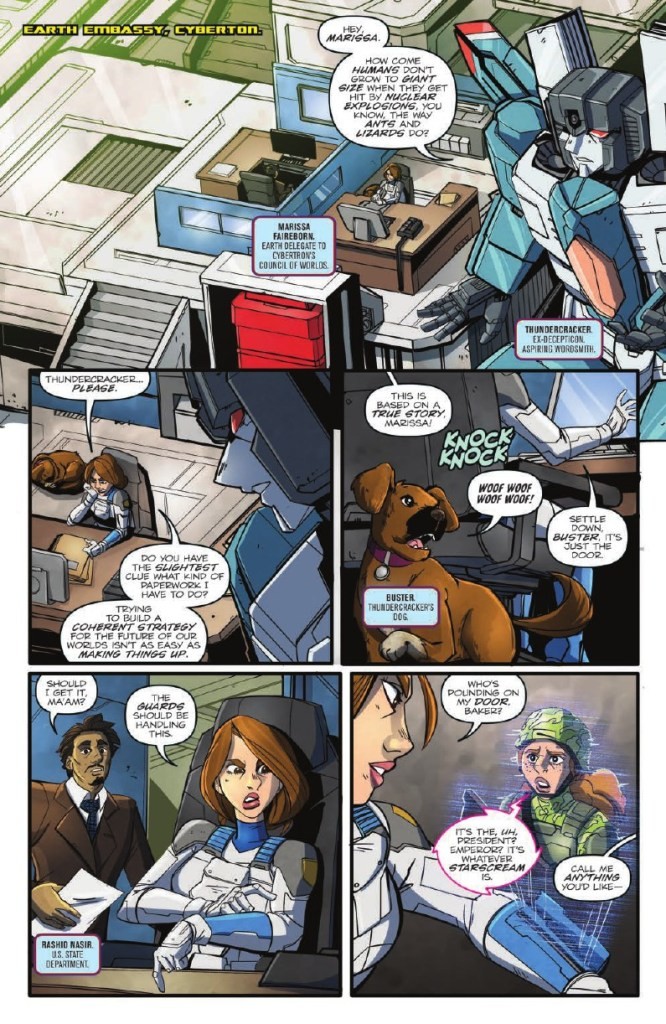 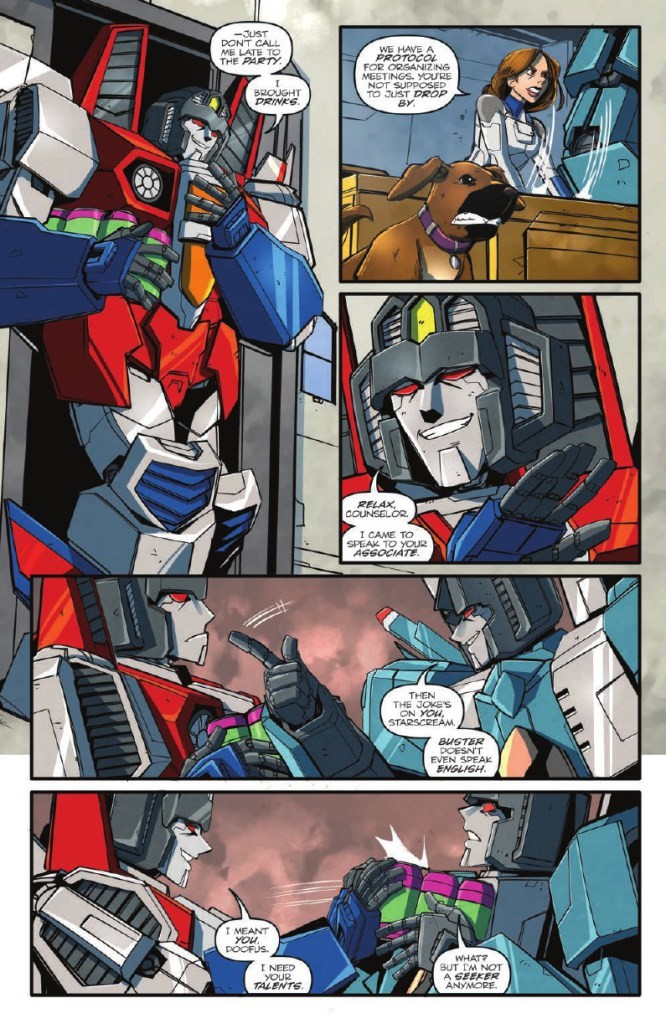 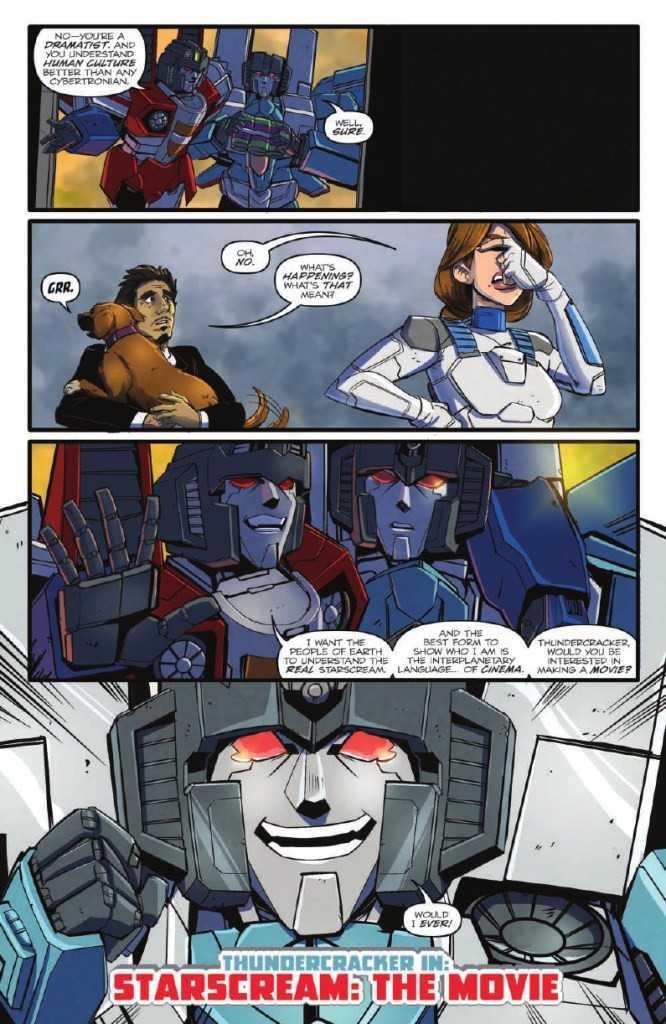 Re: Full Preview for IDW Transformers Optimus Prime #16 (1941941)
Posted by WreckerJack on February 23rd, 2018 @ 4:32pm CST
Ugh I keep saying I need to start reading this comic in addition to the others I read.

In Japan, we actually GOT Starscream with our coffee, like a boss.

In Japan, we actually GOT Starscream with our coffee, like a boss. As for taste, it's just regular, canned coffee, with a bit of milk and sugar.

As for taste, it's just regular, canned coffee, with a bit of milk and sugar.

I did, but I left it intact.

NOTE: The Annual is out on Wednesday, but to avoid discussion about it clashing too much with the other Optimus Prime comic book also out this week, this review is published before the release of the book. There are no spoilers insofar as we were able to keep them in check.

Synopsis
THUNDERCRACKER IN: STARSCREAM: THE MOVIE! The good news: somebody finally gave Thundercracker money to make a film. The bad news: it's Starscream, and he wants a biographical picture to win over the people of Earth. Will Thundercracker stand by his principles or... well, no, he makes the movie. 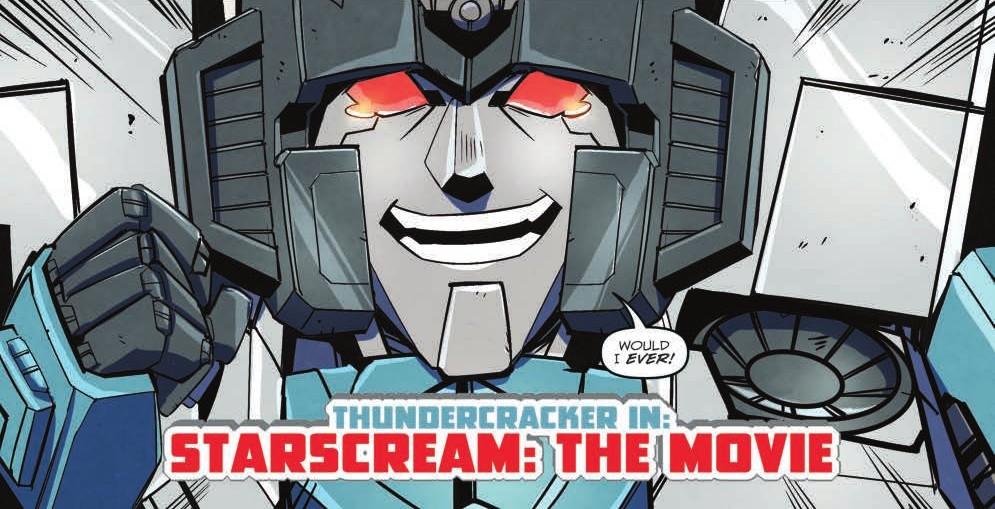 Annuals are a strange thing, in comics series, arriving as they do from outside the narrative, but still usually relevant to the main strands of stories told in the main series they refer to. In Till All Are One's case, we saw it actually being a conclusion; in Optimus Prime, we see a long-frame of rounding out and rounding up some moments regarding Starscream (in deferred time) and Thundercracker himself. 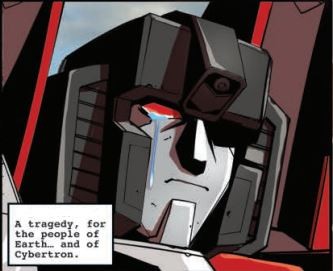 And the result is something that truly excels at highlighting the troubled past of the Seekers and the Decepticon ranks and faction, through the focus of the former's leader Starscream, and the lens of Thundercracker - and it does so injecting some actually surprisingly serious, resonating moments in an apparently light-hearted framing.

The story, then, takes place across a number of moments that follow Starscream's rise to power and later fall (hence my reference to the TAAO annual above), as Thundercracker starts the work and only concludes it much, much later. Barber's script, as I will say in the other Optimus Prime comic review this week, is a mine of delights for anyone with any interest in Transformers lore, and choc-full of cameos and references.

you're gonna need a bigger bot!

And that is something that Barber is very good at, leaning onto it in full force for a lot of beats in the issue. Using the framing of Thundercracker to give us a story about Starscream was good. Very good. It then turns to Thundercracker again, almost suddenly, and it gets perhaps even better, reminding us of how powerful he actually can be, and what his background is.

The general framework of the light-heartedness of the script suits Priscilla Tramontano's art style perfectly, and John-Paul Bove's colours just help it that little more, keeping in line with the likes of MTMTE #57 in Titans Return, and the general silliness-but-not-really of Thundercracker's emotive side, even just as we open the issue on the title page. It's just.. fun.

An unexpected - though entirely by my own fault - surprise comes in the small parts in which regular Thundercracker artist (from xRID and Transformers days) Andrew Griffith was brought in, with colours by Josh Burcham, to round out some flashbacks and cutscenes. And paired with Tramontano, and the framing of the narrative devices, it just works. Beautifully so. 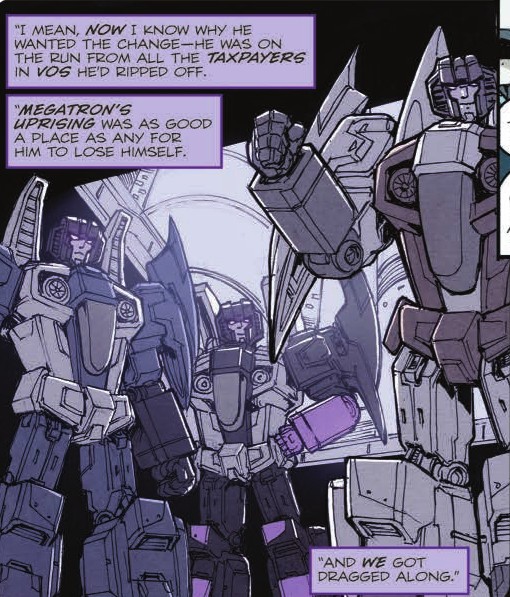 As for the joyous touches added by the lettering, we see Shawn Lee feature back in, and having probably as much fun as the rest of the creative team on this, with some particularly fun parts in Buster's various noises, and the sound effects that manifest in various forms throughout.

We've seen both of the covers available for the issue, and both are viewable in our database entryhere, but I chose the Andrew Griffith / Josh Perez for the points made above: having him show one of his old 'creations' was a lovely touch.

Thoughts
WARNING: this may contain spoilers

A script that takes itself nowhere too seriously, with art that combines the more significant beats with the overall joyful, gleeful fun that the team clearly had while working on this project, with a spotlight on some of the lesser seen moments of Decepticon and Cybertronian history, and a bot-load of character work worthy of the best bottle episodes out there. You really should pick this annual up, with one caveat...

me, humbly, with this review

...Barber's strengths may also be the hurdle to new readers coming to see Thundercracker doing fun movie fanfic things and being more influenced by humanity than Decepticonism. The references, the interviews, the cameos - they may not work for a newer Transformers fan (but which also speak to readers of Revolutionaries, GI Joe, xRID, and more). At the same time, they do not, in any way, detract from the overall enjoyment of the story, as those very same references also branch out to wider points, such as commentary on fandom, and popular media in general, references to specific franchises, and more. I repeat myself: pick this up.

Targetmaster Kup wrote:Where in continuity does this issue for?

It appears to take place between Optimus Prime #14 and #15, before the TAAO Annual.
Click here to view additional comments about this topic at the Energon Pub Forums ...