Full Preview for IDW Transformers: Till All Are One #11 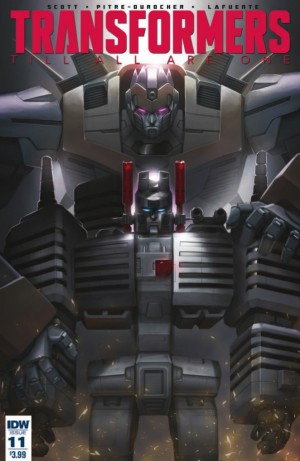 Out from IDW Publishing this week, from Transformers universe proper rather than the expanded Hasbro one, is the penultimate issue (..oh) of Till All Are One. Are you ready to get heady? Check out the full preview below, and head back on Wednesday for a Seibertron.com review!

Transformers: Till All Are One #11
Mairghread Scott (w) • Sara Pitre-Durocher (a & c)
With Elita One's influence closing in around Starscream, he's desperate to make any alliances he can. Turns out, a powerful ally might already be within his grasp. But is he willing to risk his own sanity to reach them?
FC • 32 pages • $3.99 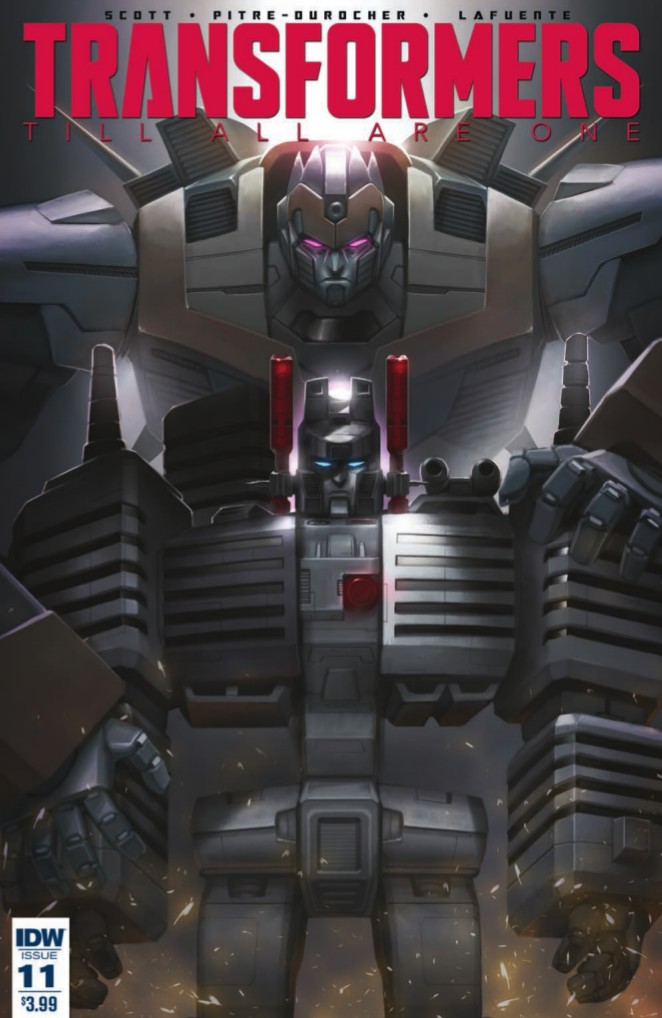 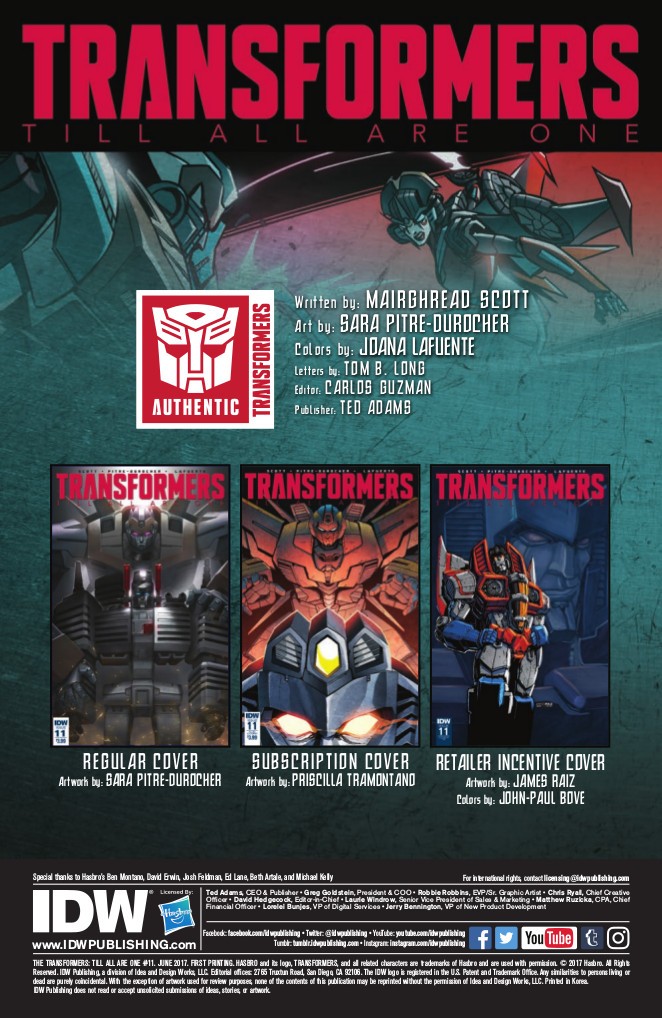 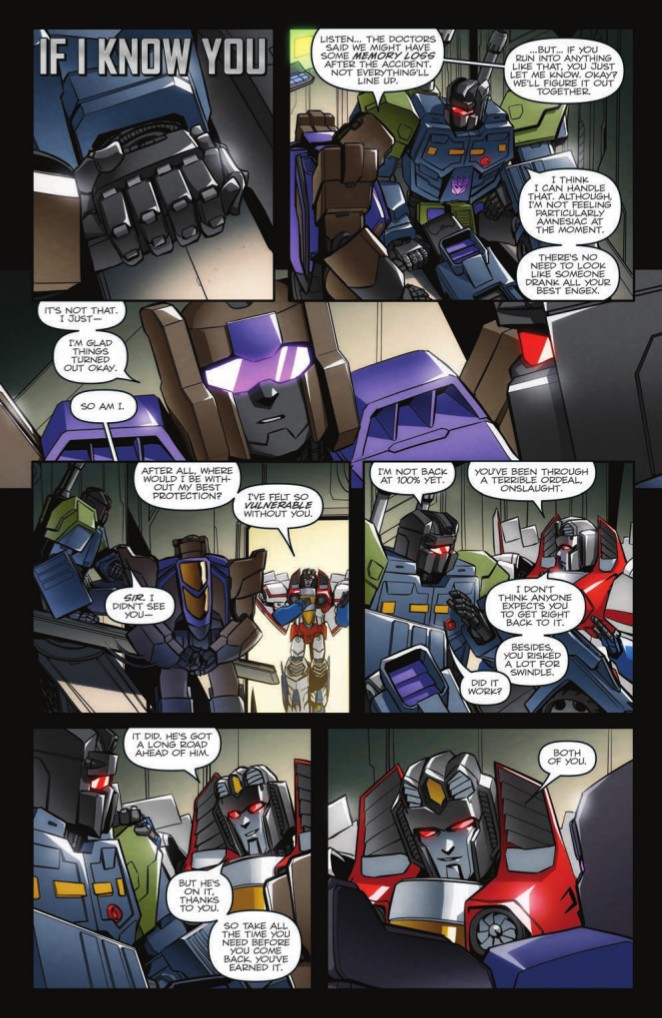 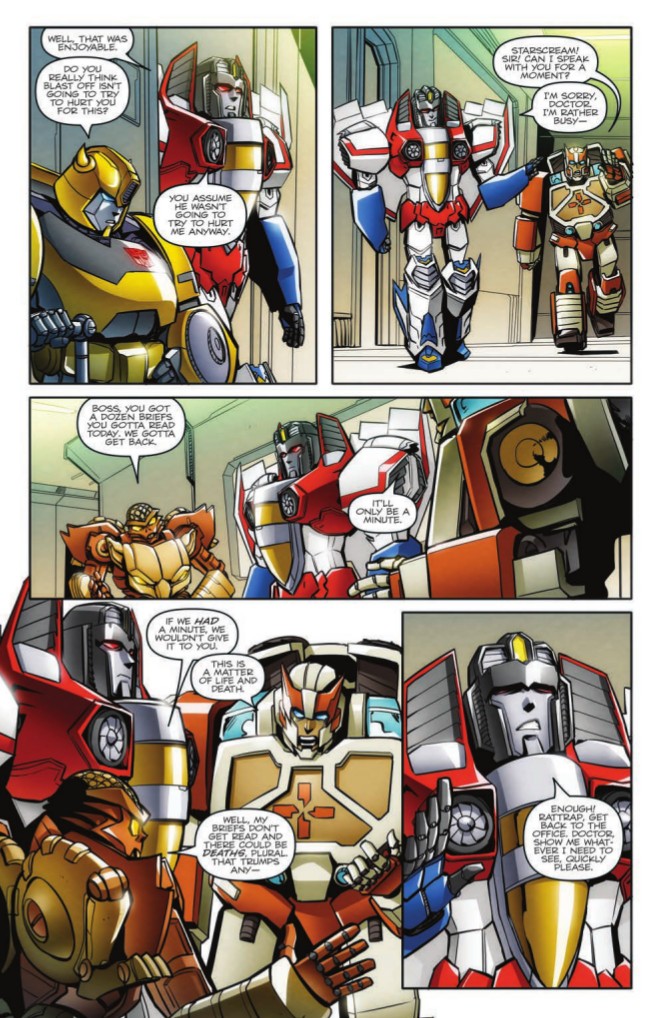 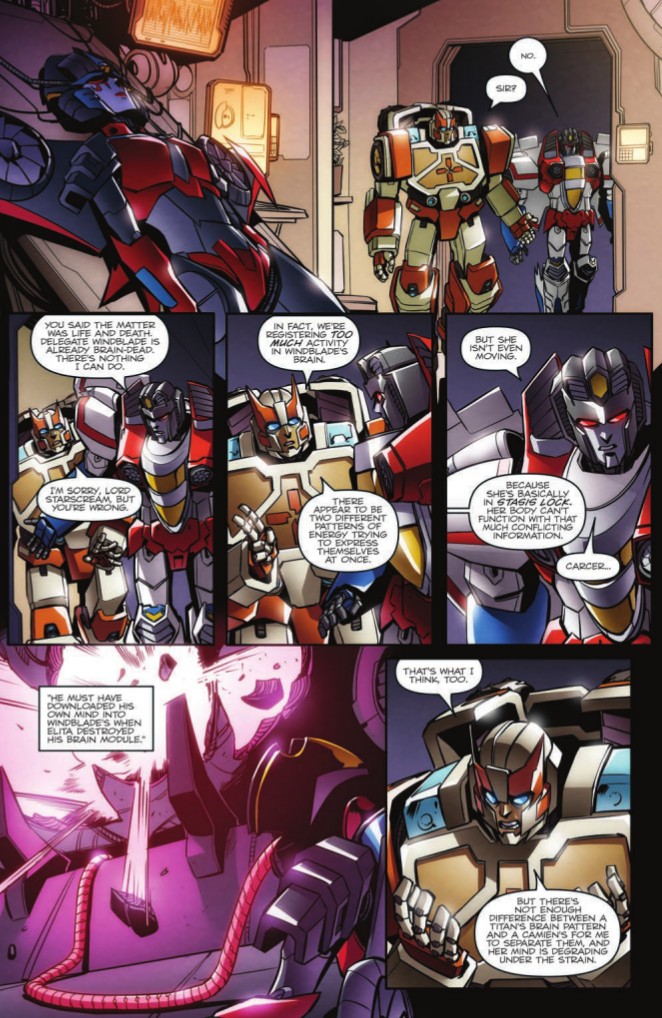 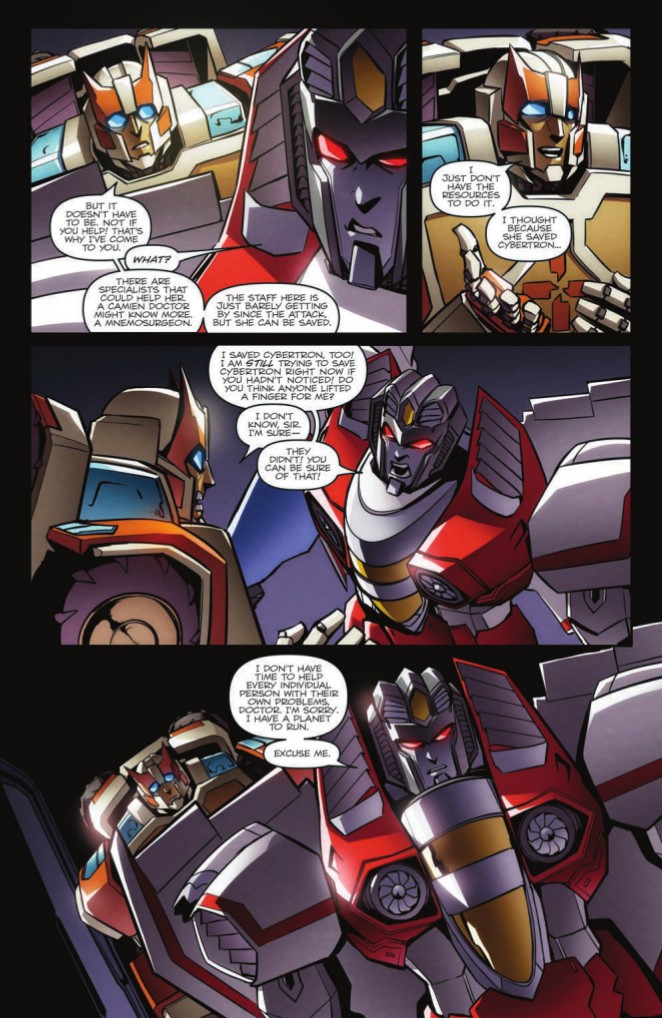 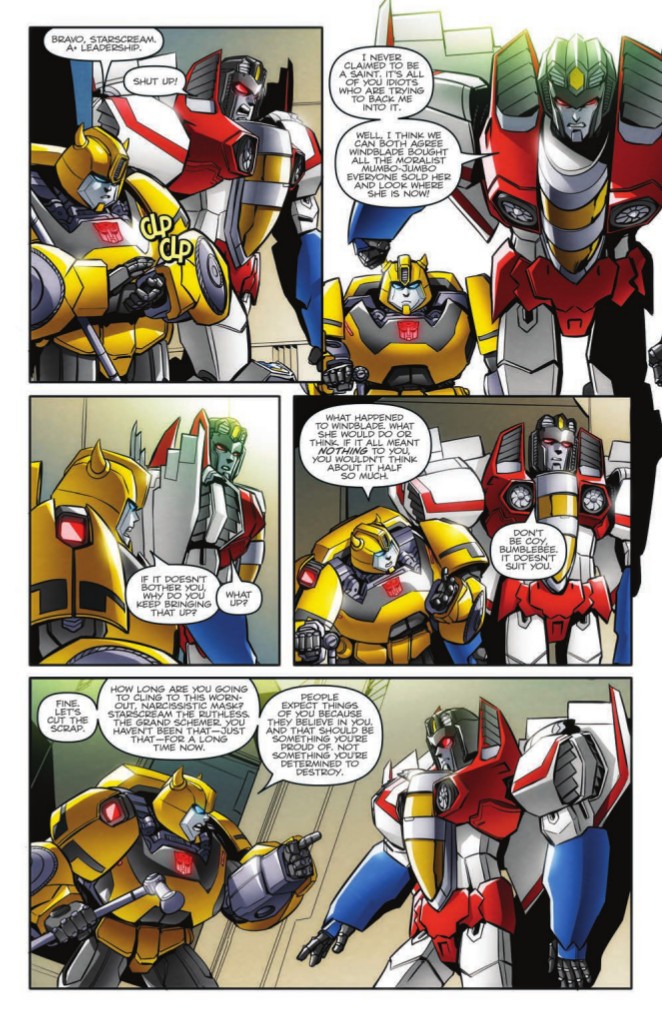 Sunstar wrote:bumblebee is ripping Star a new one. Bee has Star pegged pretty well. Star - I have been reasoning, has been silently grieving windblade. He likes her. She saved his life once and he hasn't forgotten. I can see him trying to keep this masquerade on of being all macho and whatnot, but he has changed. Possibly embarrassed by it.

There are more affinities between Starscream and Windblade than either is willing to admit, I'll agree to that!
Re: Full Preview for IDW Transformers: Till All Are One #11 (1894427)
Posted by Va'al on July 5th, 2017 @ 2:31am CDT
One/Zero
(Spoiler free-ish)

Synopsis
With Elita One's influence closing in around Starscream, he's desperate to make any alliances he can. Turns out, a powerful ally might already be within his grasp. But is he willing to risk his own sanity to reach them? 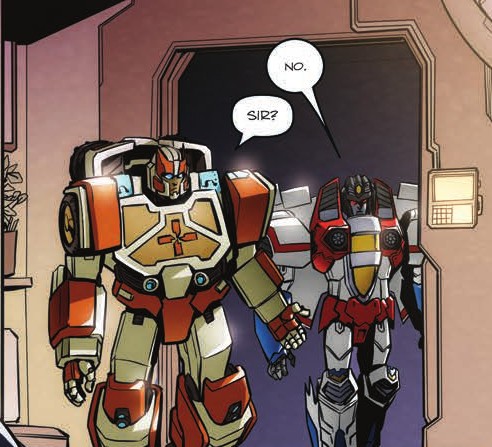 Penultimate issue. I'm still letting that sink in. Penultimate. The story of the characters in Till All Are One will of course continue, but this particular iteration of space robo-politics will be over in a month. However, if this issue is anything to go by, it will be doing so with an implosive, impressive bang. 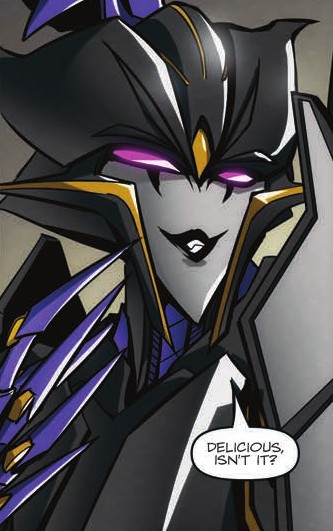 With a side dish of creepy

I have not been shy about my appreciation for Mairghread Scott's handling of darker humour, politics, general social interactions and how the three can mix with the more action-based sequences as part of a new, almost entirely original episode within the frame of a long-standing story. Because that's what the Council, and actual Starscream ruler, and the ex-colonies, are. New stories.

In those new stories, we have a very very old one that comes back to the fore since the end of Revolution, and teased all the way through multiple series before then. With Carcer/Vigilem, Liege Maximo, and the Primes showing up something fierce, the wider landscape of these stories has changed drastically - as a Cityspeaker, one with a connection to Metroplex, Windblade is perhaps at the centre of an involuntary storm that (corporate events notwithstanding) might change everything even further. 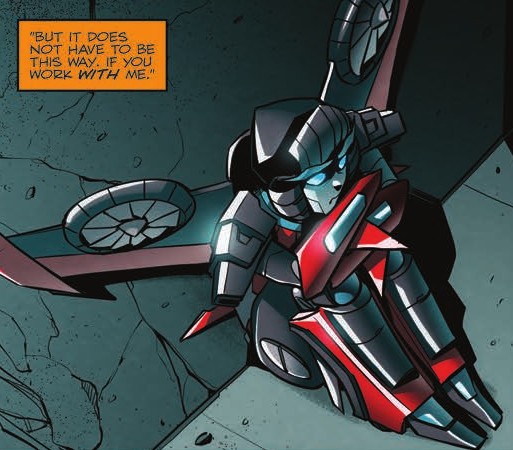 The other major storyline, and the one framing the central events, is focused on Starscream of course, and how he is handling ..everything happening around him right now, and how he is in fact the eye of the storm in a different manner than Windblade, but central nonetheless. Aftermath of last issue is coming back to haunt him, and even the Camien's inoperativeness somewhat stings - at least he has friends, right?

Sara Pitre-Durocher shines in this issue, even more so than in previous work - and even despite a similar setting and 'battlefield', if you will, in-story. The expressions that Starscream has throughout are both emotionally compelling and amusing, but one sequence layout in particular tugs at sparkstrings quite loudly. That, and the Windblade sequence, are a testament to her skill and talent brought into this book and the TF art scene in general.

I'd rather you appreciated it in full by yourselves

Without of course forgetting Joana Lafuente's colour work for those same sequences - not that you can ignore it even if you wanted to. If the wider shots of the framing story use an abundance of neutral, light colours to highlight the space around Starscream, the Windblade sequence does something entirely different, and eye-wateringly good at that, adapting colours and lighting to the tones and shifts in linework.

The lettering is still in the capable hands of Tom B. Long, who has a fairly straightforward placing of dialogue to work on, plus some fun word layouts in certain sections - and everything looks clean and accessible, never to underestimate in content heavy books. The thumnbnailed cover is the variant by Priscilla Tramontano, hinting at some more of the story that we might see next issue too, and all three are to be found in our Comics Database entry. You can also take a look at James Raiz talking about the creation of his Supreme Leader cover (with colours by JP Bove), too, right here!

I personally adored the art direction and structure of the story, given how much of it concerns inner scapes (though on such a large scale) the cinematographic approach of zooms, panning, focusing on smaller changes and poses especially for Starscream - though some voices on staff had the opposite reaction to some of those elements too, especially towards the end and in the hallway scene. That said, everywhere and anything concerning Windblade's sections is truly outstanding.

Take the grand action of the previous story arc, the scale of the Titans arriving and the response to their threat, with everything it took and everywhere it led to. Then move that scale into inner battles, inner turmoils, and dark alleys of the mind, as played with in the previous issue and Blast-Off's mind. That's what this story is dealing with, and where it'll ultimately play out in the next month, consolidating just how similar Starscream and Windblade actually are. I'm (not) ready.

Hell, the issue could be the Windblade vs. Spoliers mental battle alone and it'd be 5/5, but then there's all the awesome Starscream stuff too. Plus some extra seasoning with Airachnid and Combaticons. Too good!

Kurona wrote:Why is TAAO so good? It's better than Transformers has any right to be; it's insane how amazing this is.

Because they broke the usual mould/formula, And allowed the Transformers to attempt peace. They allowed Starscream to actually lead for more than 15 seconds while Keeping Megatron and Optimus Prime largely out the picture.

The use of ghost bee as his "sub concious" trying to guide him into the new age is perfect. I always felt there was a personality schism and that his warrior side would be somewhat rebellious to that better side.


Would make a good cover LE0KING wrote:I hope they give scott another book... Actually the same book but with a name that will catch more attention. I think this didn't sell well cause people thought it was another Windblade book. We need a name that shows that there are still G1 characters hanging around. Forgive me for this, but they could call it All Hail Starscream.

She's co-writing First Strike, after that it's unknown. I actually think "All Hail Starscream" is a catchier hook for a general audience than "All Hail Optimus", so yeah I'd support that as a title!
Re: Full Preview for IDW Transformers: Till All Are One #11 (1895268)
Posted by Va'al on July 9th, 2017 @ 2:26am CDT
Next month will see the final issue of IDW Publishing's Transformers: Till All Are One series, and they've updated their own site page for the book to include a variant cover by Priscilla Tramontano - once more featuring Starscream and what looks to be a much more benign take on Windblade's influence on him. Check it out! 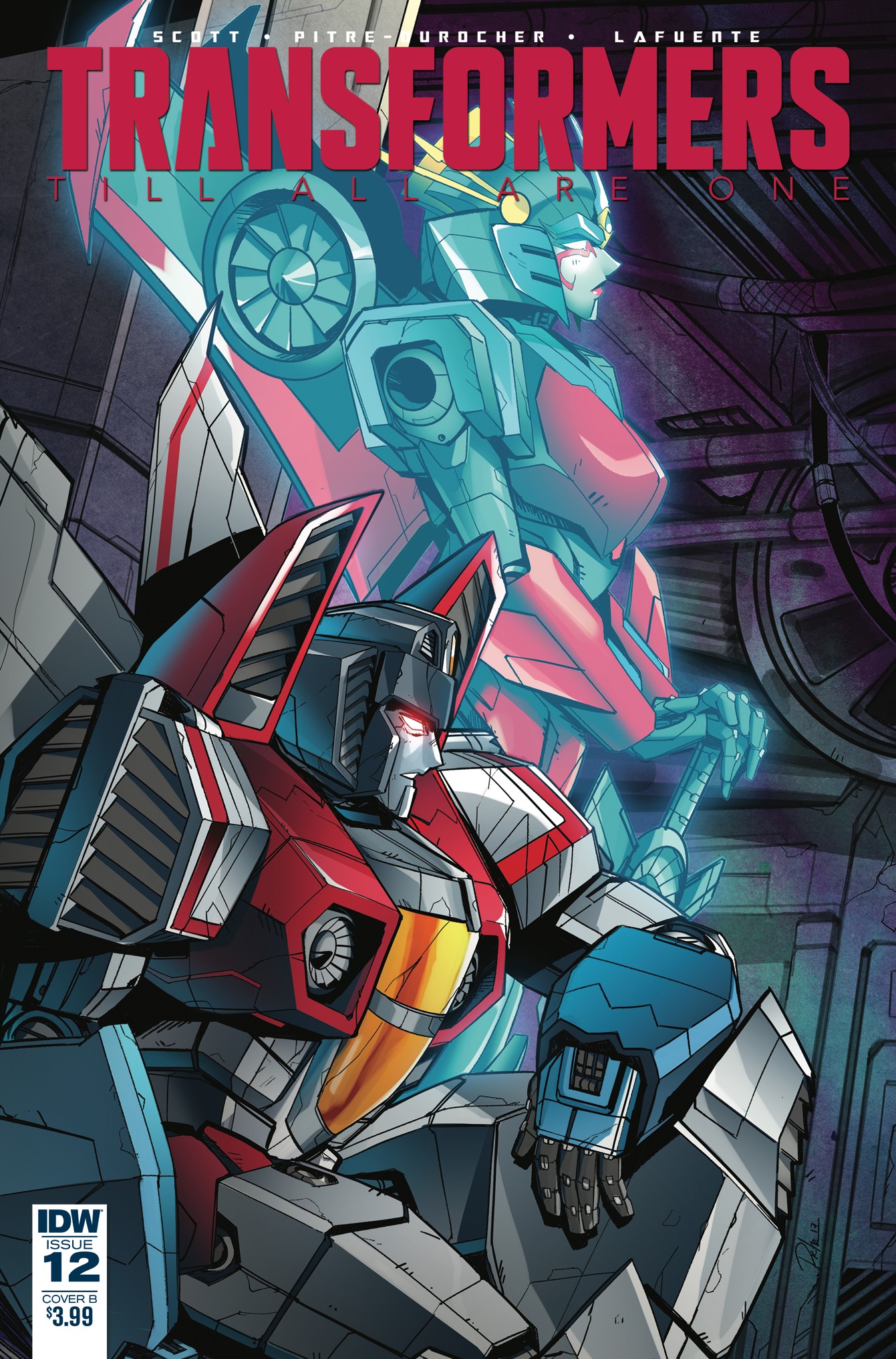 Va'al wrote:Next month will see the final issue of IDW Publishing's Transformers: Till All Are One series, and they've updated their own site page for the book to include a variant cover by Priscilla Tramontano - once more featuring Starscream and what looks to be a much more benign take on Windblade's influence on him. Check it out!

I love the composition of this one. It feels so Calm.
Re: Full Preview for IDW Transformers: Till All Are One #11 (1896663)
Posted by Va'al on July 14th, 2017 @ 11:59am CDT
Once again via Previews World, we have the third variant cover (RI) for the final issue of Transformers: Till All Are One from IDW Publishing. The art is by fan artist ZeroB, as has been seen on covers before, and features Windblade in her Camien glory on Cybertron. Check it out!

(W) Mairghread Scott (A) Sara Pitre-Durocher (CA) Zerob
Starscream makes his most desperate move yet in order to protect himself from Elita One's rising power. But for once the master of manipulation's only choice is to make himself helpless to another. Good thing no one's got a grudge against Starscream, right? 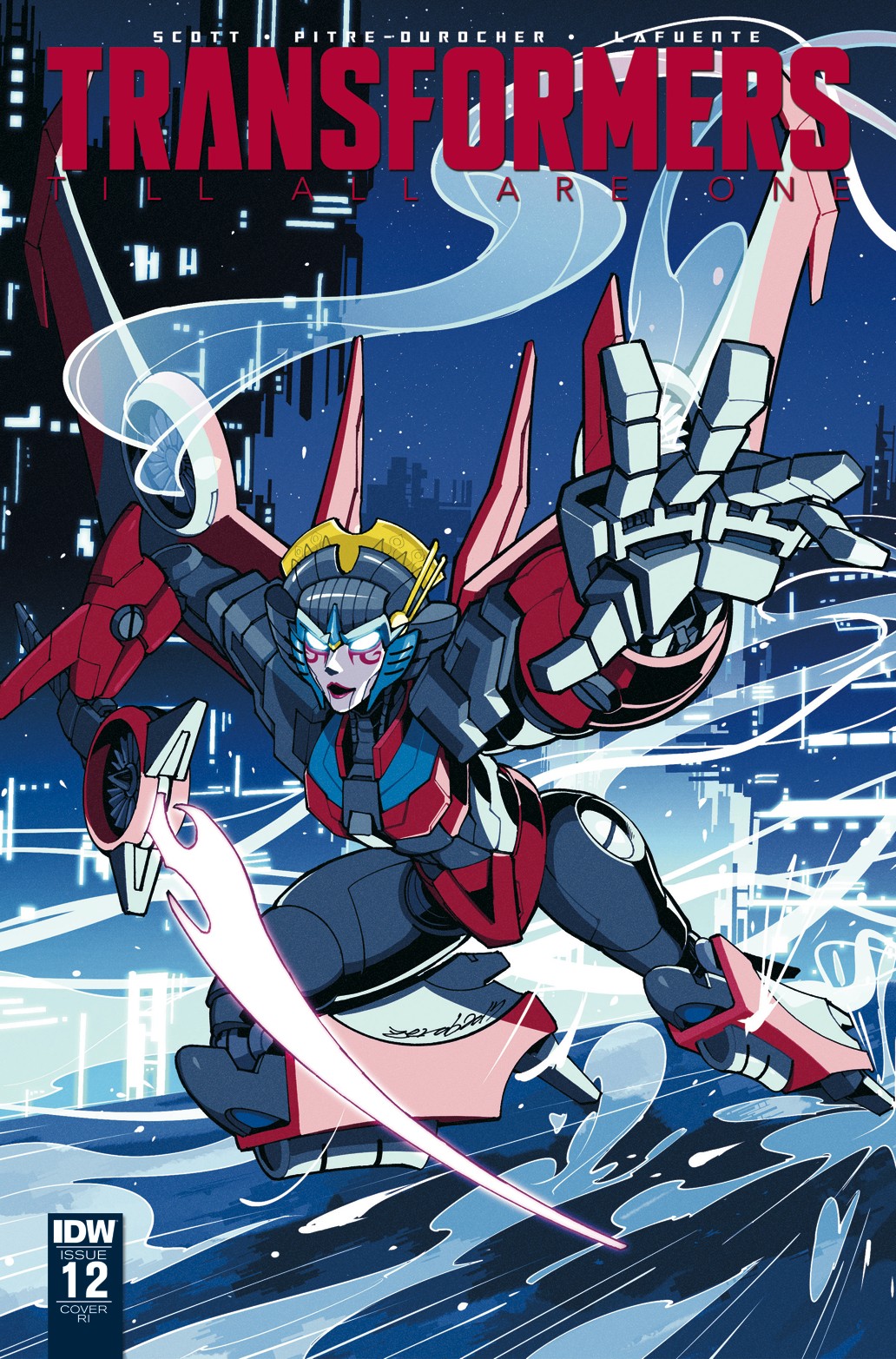 D-Maximus_Prime wrote:Issue 11 was awesome and amazing and it was the best so far. I love Scream and Bee together.

Also, was it really Bee, or is it Centuritron at the final panel there?

Transformers: Till All Are One, Vol. 2
Mairghread Scott (w) • Sara Pitre-Durocher (a & c)
Epic space-opera action continues as the dramatic TRANSFORMERS continuity leads on to new and explosive revelations! REVOLUTION is over but the danger isn't! A wave of undead TITANS threatens CYBERTRON! STARSCREAM will need more than secret police to stop the oncoming horde, but our Fearless Leader finds himself short on friends and firepower. Who can be called upon–and why aren't they stepping up to the plate? Collects issues #5–9.
TPB • FC • $19.99 • 120 pages • ISBN: 978-1-63140-924-0

Bullet points:
"A great book with some serious art design that fully compliments the Transformers universe as a whole and adds weight and importance to the characters." –Big Glasgow Comics Page
Advance solicited for July release! 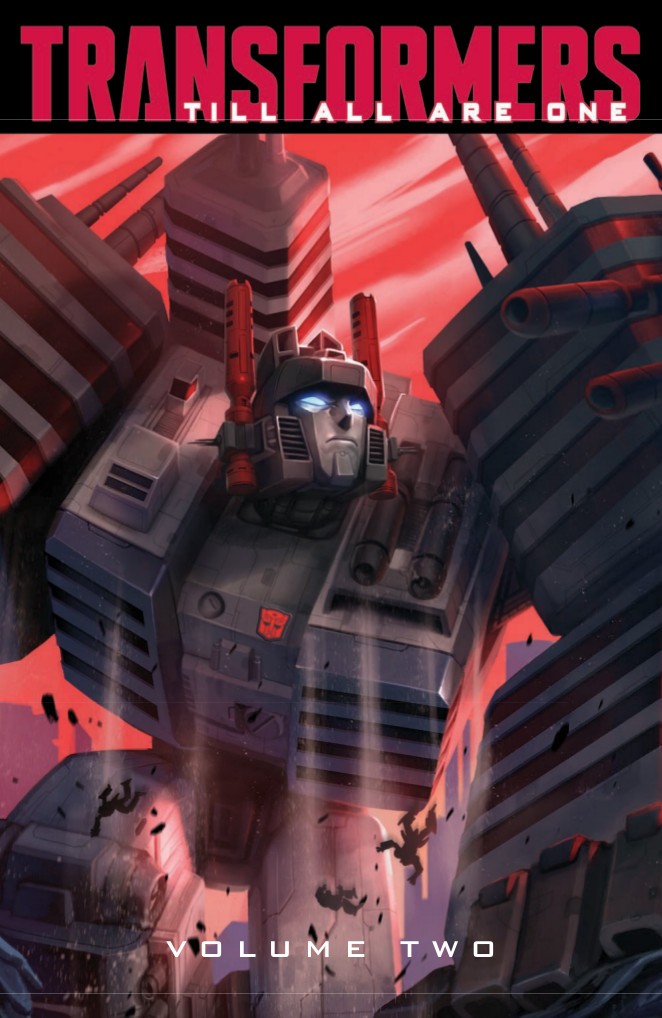 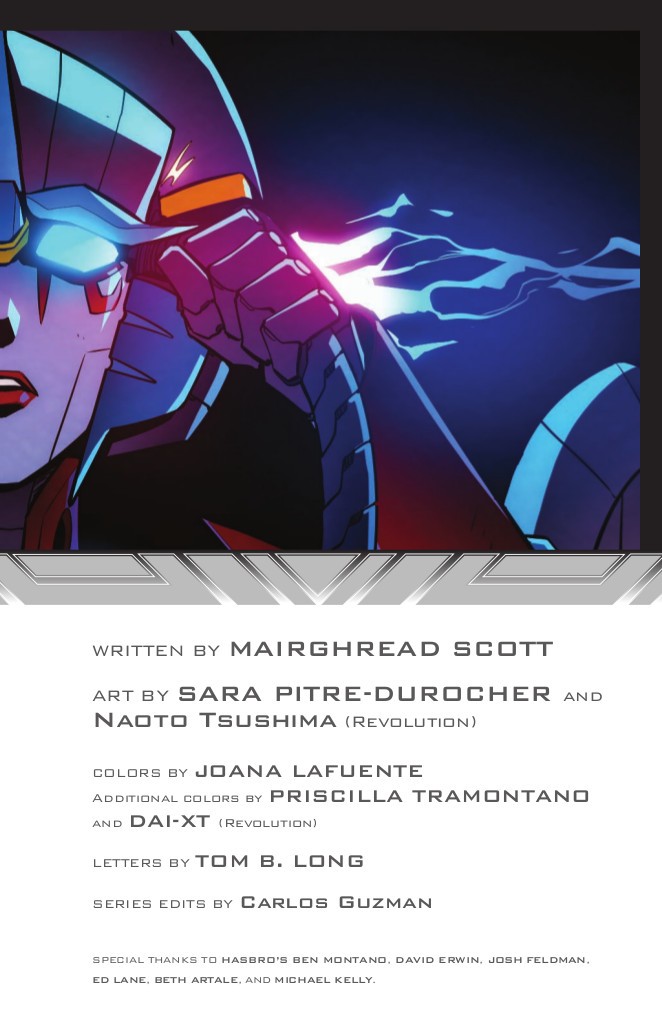 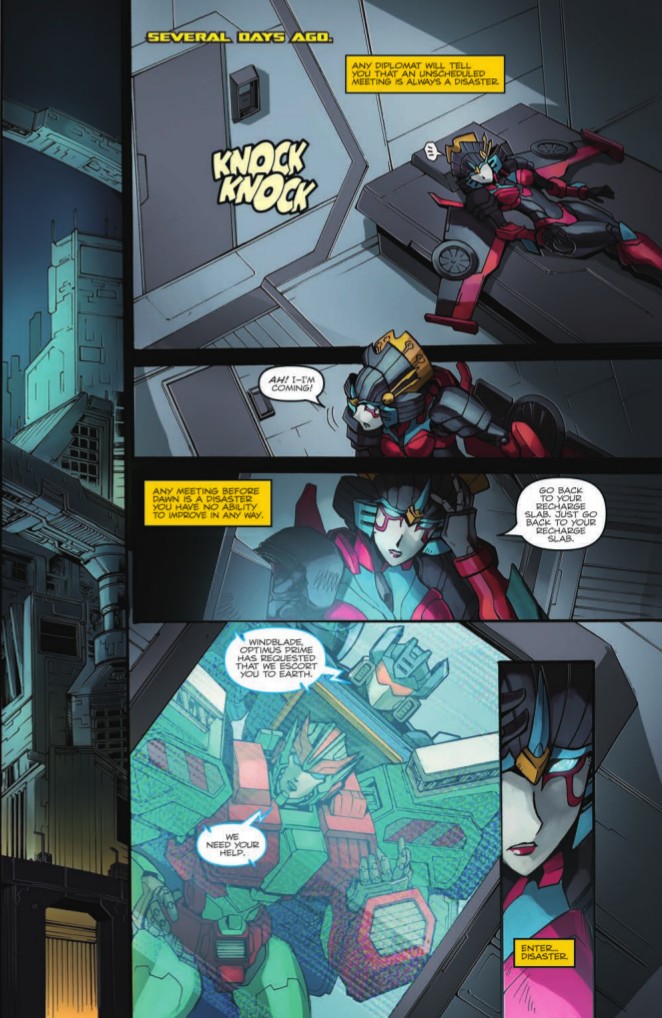 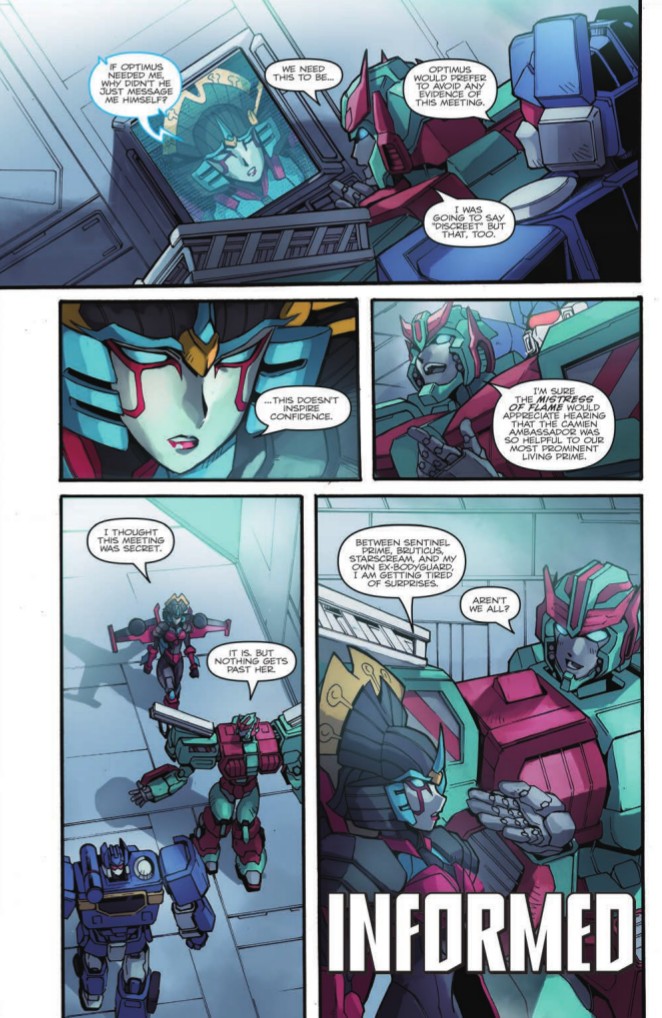 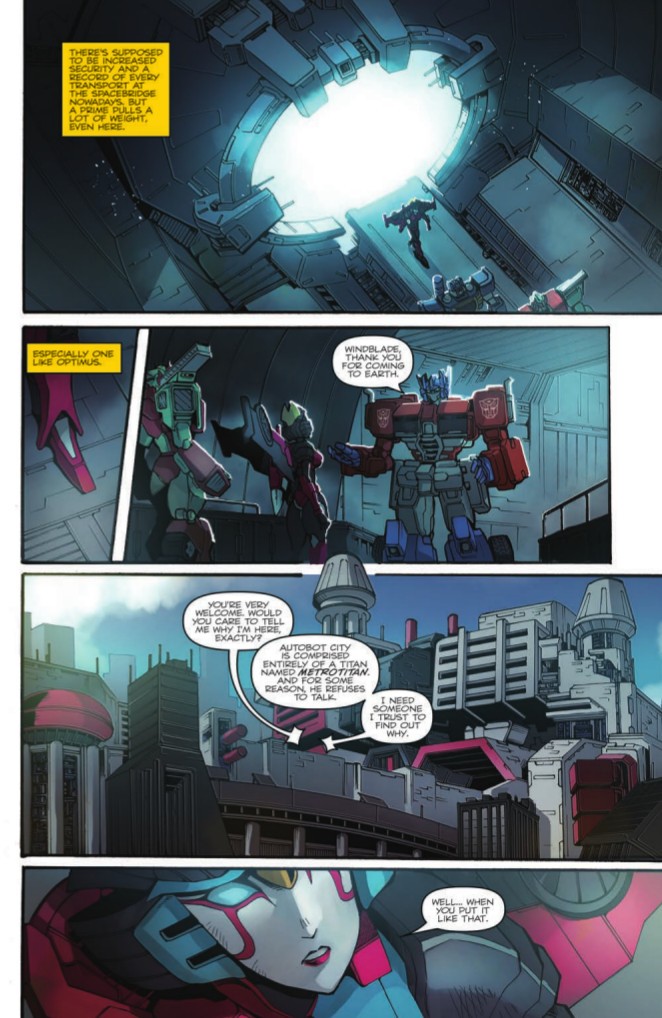 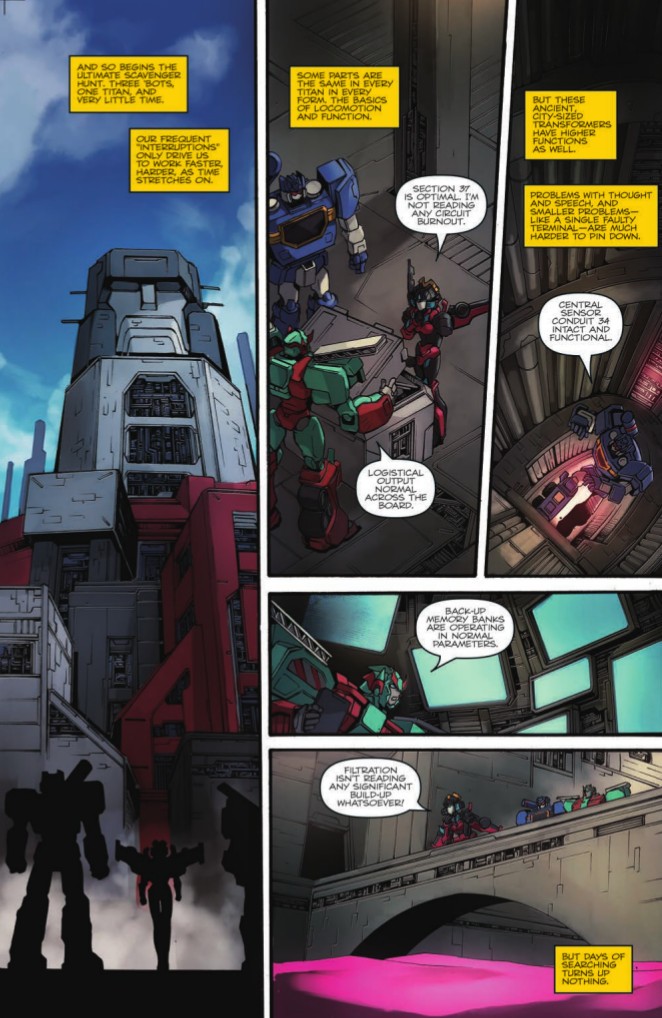 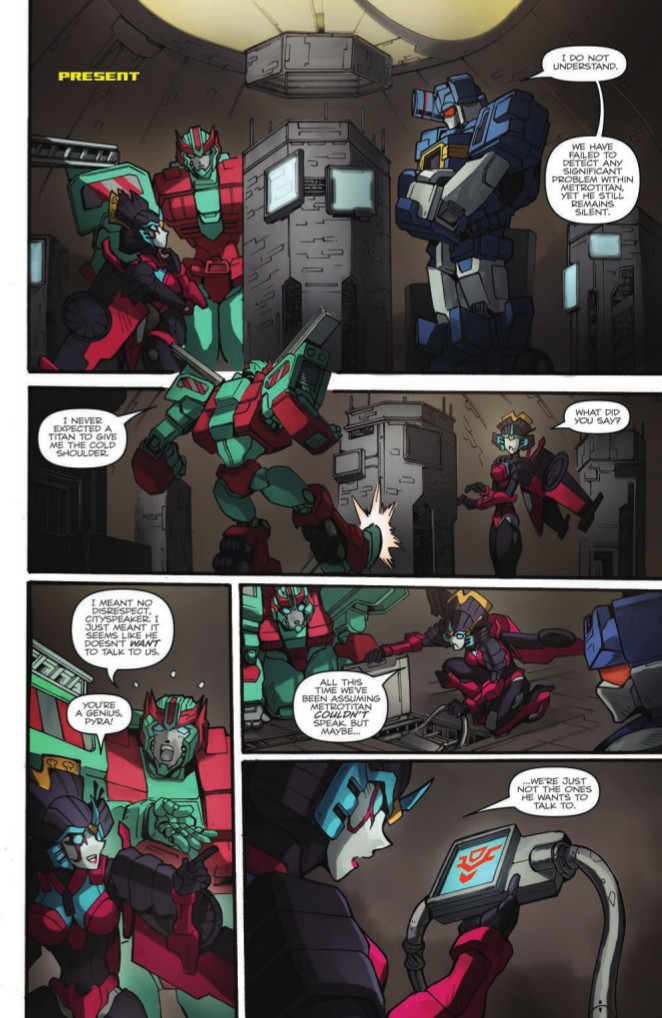 Why is the preview using the pages from the Revolution one-shot? and how are they doing these TPB is this collects 5-9. Does this mean the 3rd and final volume will only be 10-12?

This doesn't make any sense
Re: Full Preview for IDW Transformers: Till All Are One #11 (1897492)
Posted by ArmadaPrime on July 18th, 2017 @ 6:32pm CDT
There is I believe an epilogue/annual being written which could end up in the third trade, but agreed that would still seem small, odd...
Click here to view additional comments about this topic at the Energon Pub Forums ...