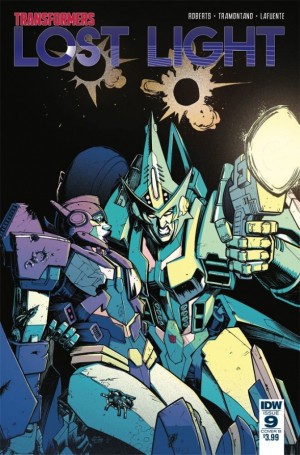 Courtesy of Multiversity Comics once more, we have the full preview of this week's issue of IDW Publishing's Transformers: Lost Light #9 - featuring the end of the mini-arc on Troja Major, and more than one twist ahead. Check it out below along with its variant covers not seen so far, and come back to Seibertron.com for a review later this week!

All sides converge on Troja Major as the race to unlock the secrets of a unique Cybertronian reaches its desperate, violent conclusion. As old secrets are revealed, Nautica must pay the ultimate price—by resorting to the ultimate currency. 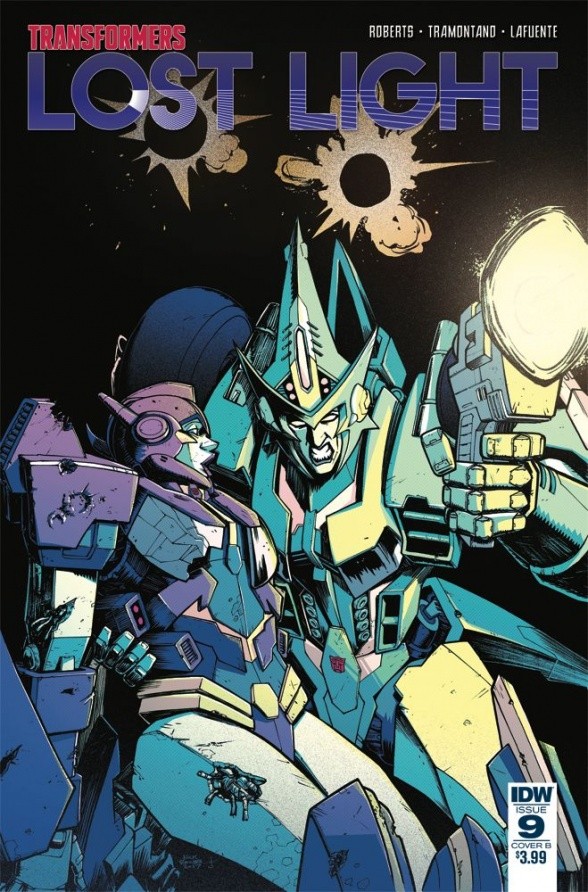 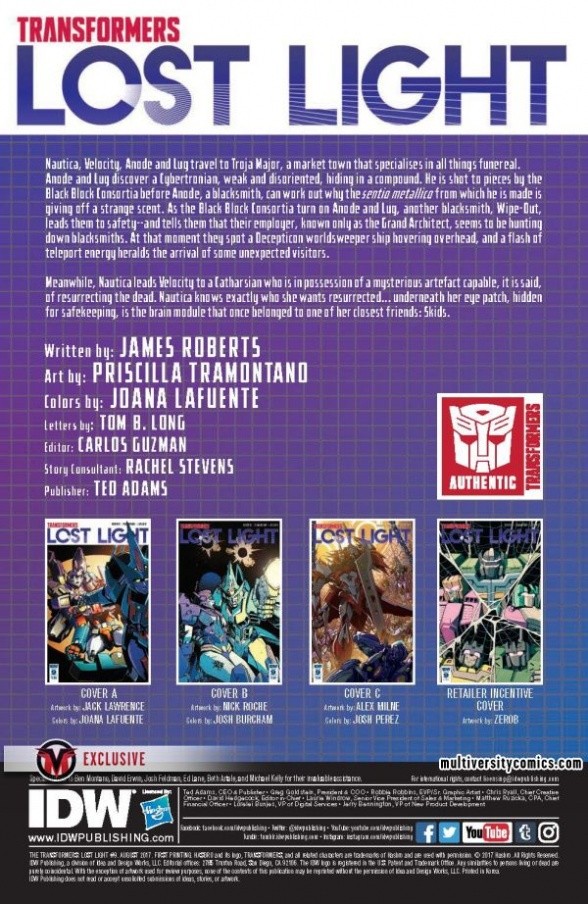 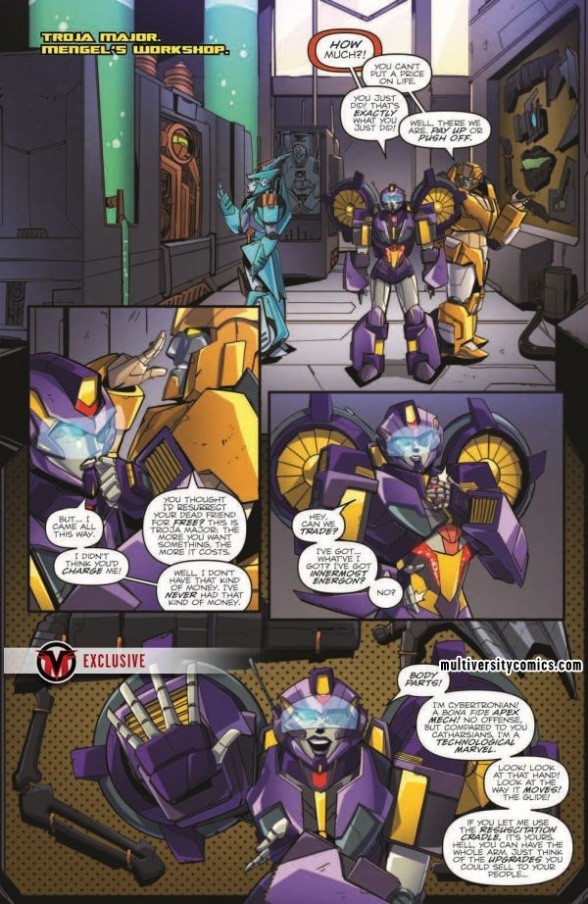 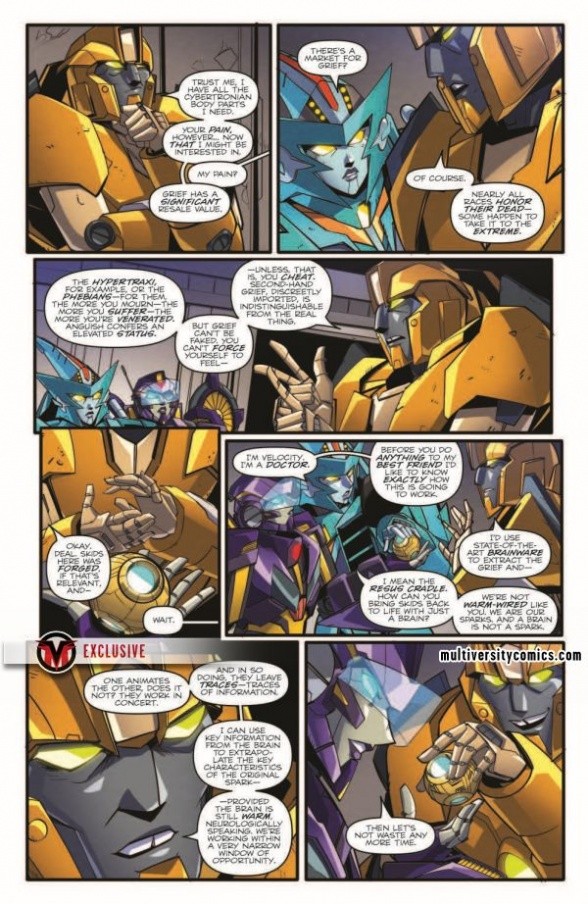 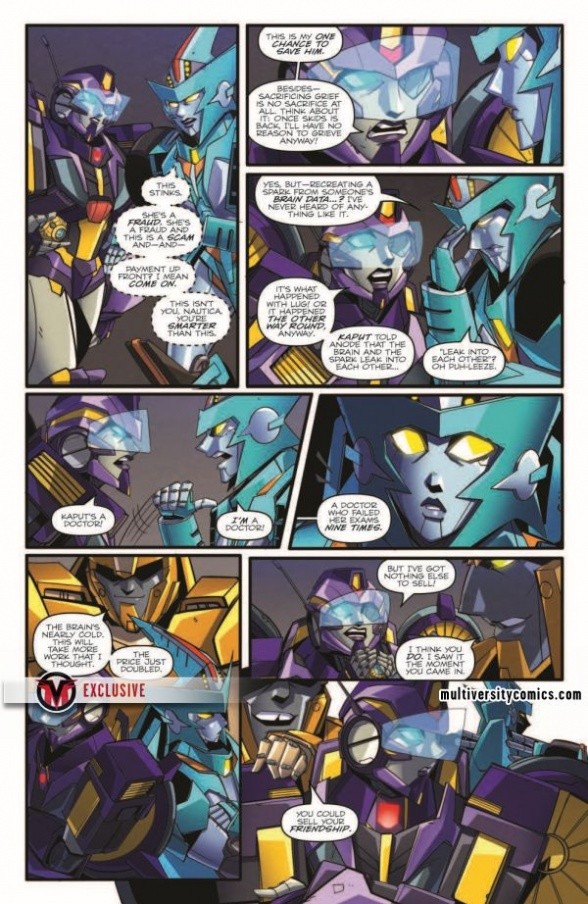 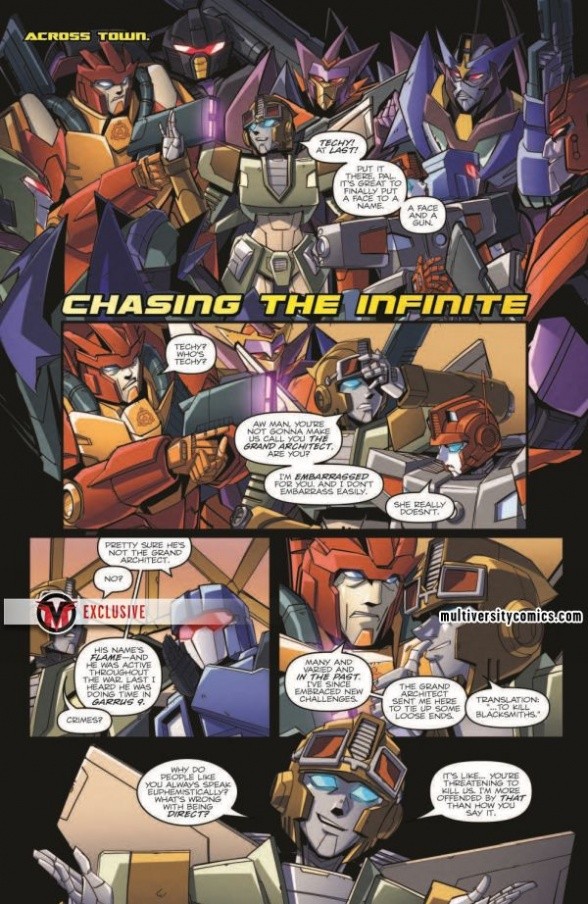 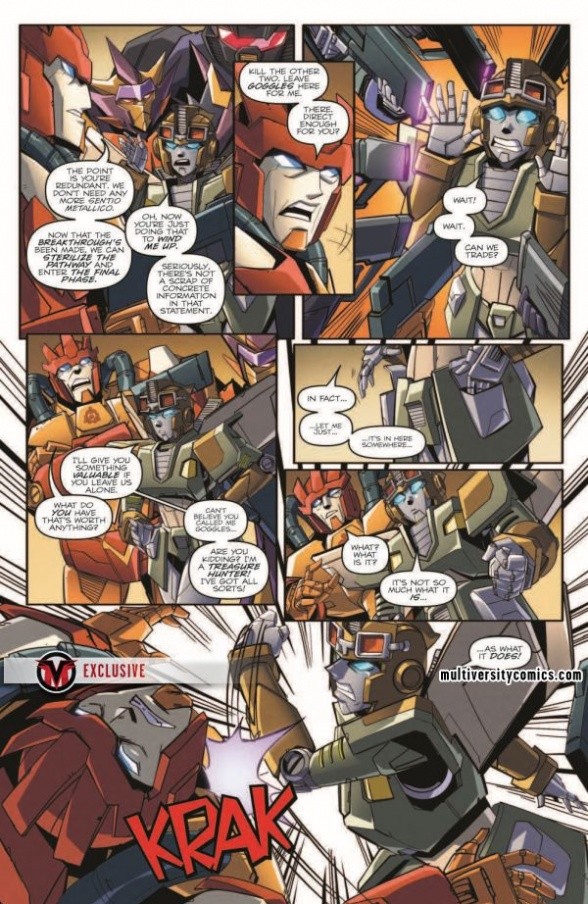 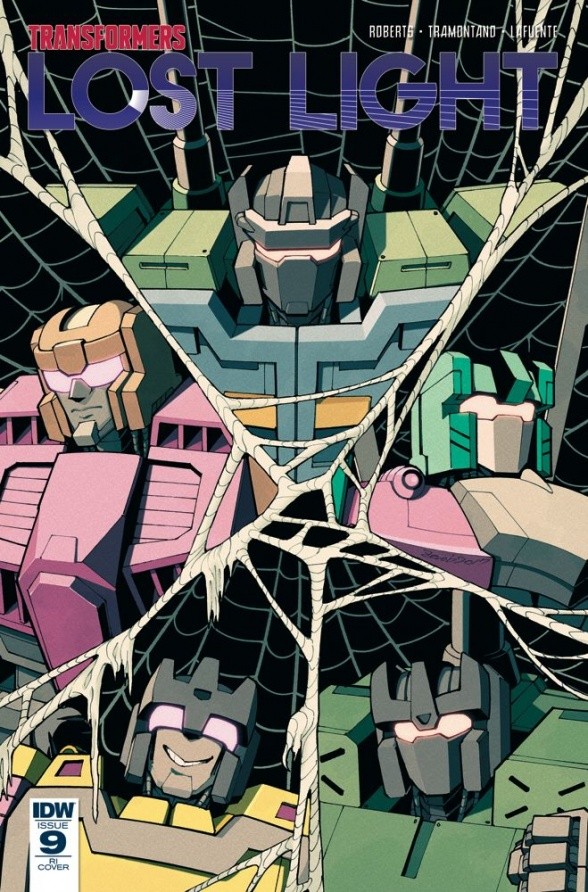 I wish it wasn't. As bad as Roberts is, even he could do more with them than Scott did.
Re: Full Preview of IDW Transformers: Lost Light #9 (1910440)
Posted by Kurona on September 12th, 2017 @ 11:08am CDT
It is strange. Excellent as these characters and this arc were, they don't have anything to do with Lost Light; it's been a few months now and it's not even part of a crossover. I suppose maybe just a tribute to one of the best parts of IDW Transformers this year?

But just wondering, I'm gonna make a custom Lug and Anode. Can someone who isn't colourblind tell me what colours those two are please?
Re: Full Preview of IDW Transformers: Lost Light #9 (1910646)
Posted by Kurona on September 13th, 2017 @ 10:04am CDT

Insurgent wrote:Haven't picked it up yet, so trying to avoid spoilers for 9.

But just wondering, I'm gonna make a custom Lug and Anode. Can someone who isn't colourblind tell me what colours those two are please?

Anode's colour scheme mainly consists of green and grey; with accents of brown and a couple bits of yellow here and there. Her eyes are bright blue.

Scorponok is revealed to be the one leading Flame etc., and the 'resus cradle' he stole from Mengel turns out to be The Magnificence.
Re: Full Preview of IDW Transformers: Lost Light #9 (1910661)
Posted by Rodimus Prime on September 13th, 2017 @ 11:00am CDT

Scorponok is revealed to be the one leading Flame etc., and the 'resus cradle' he stole from Mengel turns out to be The Magnificence.

Thank you. Other than Scorponok nothing else in that sentence is familiar to me.

Synopsis
All sides converge on Troja Major as the race to unlock the secrets of a unique Cybertronian reaches its desperate, violent conclusion. As old secrets are revealed, Nautica must pay the ultimate price—by resorting to the ultimate currency. 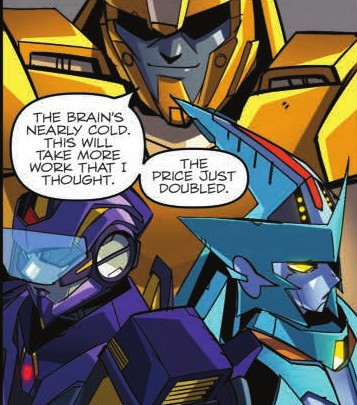 Not sure Ursula looks good as a robot

Story
The other comic released today by IDW Publishing - after the onslaught of news from the weekend, still brimming my newsing cup - is the second part to this interlude arc before we return to the ship proper, with Lost Light #9 ending the stay on Troja Major and opening some proverbial cans of cyberworms, by digging into old soil. 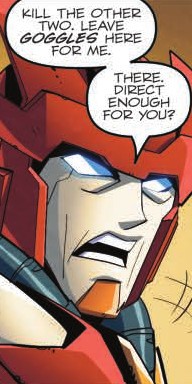 At the end of last issue, we had split the party in two, with Velocity and Nautica dealing on one side with a more emotional issue for practical gain - and that is pretty much still the case, with some severe manipulation of grief, friendship, and overall being an asshole dragged into looking for solutions, while also enabling bad, even (self)abusive behaviour. 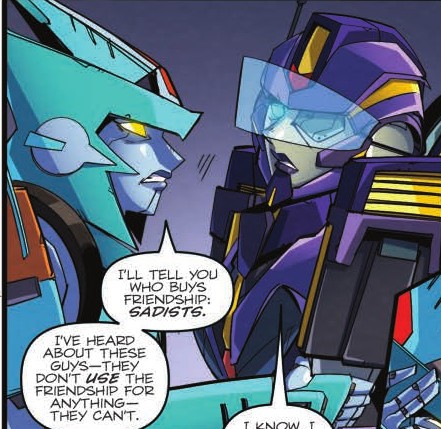 SADISTS I TELL YOU

On the other, we return to new!Lug and Anode, as they face one of the Clans that might finally be driving the story forwards again from before we were stuck in the Functionist universe. That old soil I mentioned? We're going back to Garrus 9, among other things, and the connections you can draw are many, except perhaps where the story ends up leading. 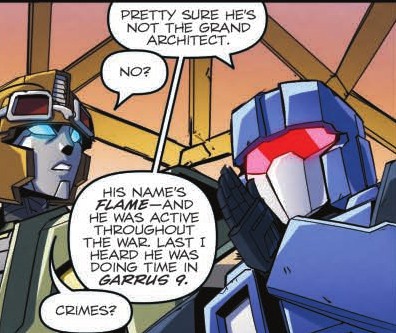 How about The One Perfect Summer kind of old..?

My biggest gripe about the issue, though? The overall story gets shoved forward in the conclusion, with the almost entirety of everything else ending very abruptly for the constraints of the page or the book itself. Plot revolving around any of the four characters was teased, and nothing (allow me the hyperbole) happened. We got character beats, we got some development of relations, but no plot until the last pages. More on this below.

With all that said about the story as writing, I cannot fault the return of Priscilla Tramontano on art to conclude this mini-arc with visual consistency. If there is a particularly heavy reliance of the plot on the emotional side of bargains and grief, Tramontano's art excels in conveying how those operate for the characters personally, and brings the full force of the feeling to the reader - while never losing sight of the composition of the page. 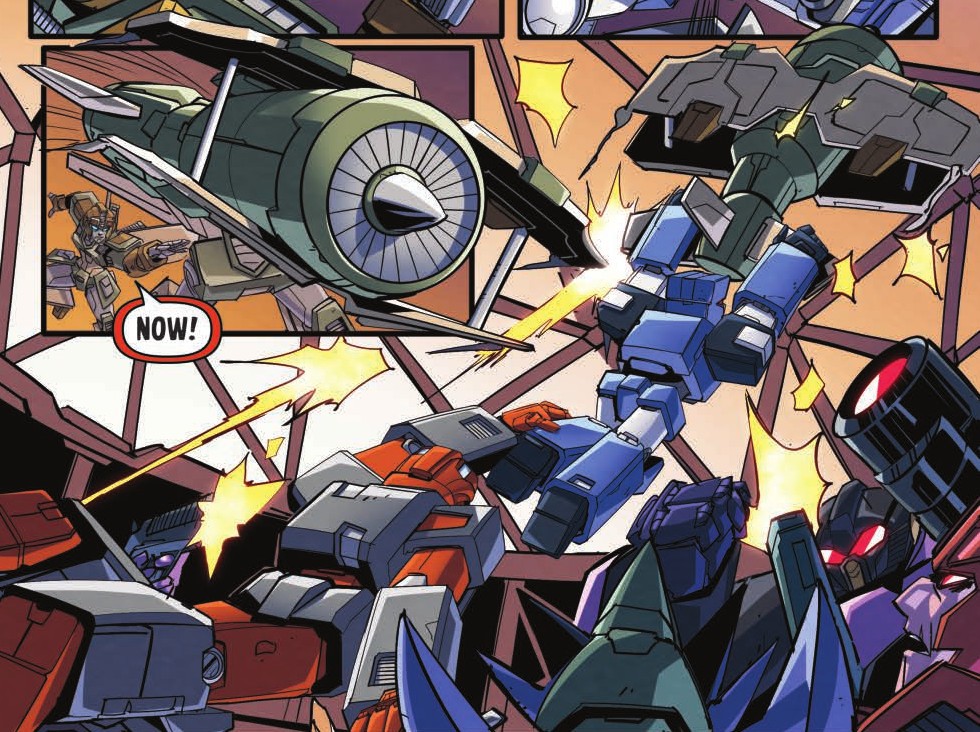 Equally, Joana Lafuente helps push what might otherwise be slower action forward, by adding the right touches of accent to the expressions and body language - while keeping coherent and consistent lighting angles, too - for a more rounded and full effect for the readers.

As shown in the image above, the lettering of Tom B. Long is also still at its full dynamic force, working perfectly with the art and incorporating the script nicely into the panels, without ever reducing the space unnecessarily - and rightly so. All covers have been uploaded to our database page for the issue - including the originally TAAO-intended variant by Zero B - and we're re-using the Jack Lawrence / Lafuente main variant for the thumbnail.

Thinking back on my negative reading of Lost Light #9, I was conferring with other Seibertron.com readers, and we shared some points: the plot that deals with Nautica felt particularly exploitative, of character and reader alike; the conclusion of the issue is where the story picks up again, only to go into entirely unknown (but still anticipated, don't get me wrong) territory next month. It felt jarring, and as if we could've had more space for any of the threads seeded in the past two months.

The emotional tugging that was obviously present in the script is very well handled by Tramontano and Lafuente, of course, as I say above, but in this particular instance it was not enough for me to fully enjoy the book, overwhelmed by the frustration of a recurring writing device in Roberts' approach to 'overstory', if you will. Let's see how he'll Get Away with this one, next month.

Re: Full Preview of IDW Transformers: Lost Light #9 (1910715)
Posted by Randomhero on September 13th, 2017 @ 2:06pm CDT
This is once again a red dwarf/Star Trek knock off story. This is Star Trek 5. It's freaking Star Trek 5!!! A machine(Sybock) that can literally take away your grief and pain.

Seriously a scene jumps with the corner saying "one brisk getaway later" yeah because it wasn't like the scene where they were escaping wasn't anything big. It certainly wasn't a secret cybertronian faction nobody has ever seen before under orders to track down and kill a couple characters that they were able to track and find at a bar in a heavily populated city so honestly tracking them to a space port would be nothing.

This is stupid. This is utterly stupid.

Nice to see scorponok back though. But it wasn't like it was too difficult to figure out it was him.

And the moment they said "we left Skids brain module" it was straight up: okay well skids will be back in a year or two either by the Cog faction or by that chick but Skids will be back
Re: Full Preview of IDW Transformers: Lost Light #9 (1910725)
Posted by Stormshot_Prime on September 13th, 2017 @ 3:22pm CDT
So it looks like the Skid's revival plot is over for a good while. With the 3 parter coming up on the Lost Light itself I doubt we'll see much of Team Rodimus.

But what the hell where did Scorponok come from? Either way, I'm glad that he's there. I feellike he had a lot of story left after not seeing him like 8 years. His role makes a lot of sense considering what we've seen in MTMTE
Re: Full Preview of IDW Transformers: Lost Light #9 (1910740)
Posted by SureShot18 on September 13th, 2017 @ 5:45pm CDT
I liked this issue quite a bit. It had some of the character stuff I love in this comic and it was entertaining. I will say that it felt like the issue ended way too abruptly though.

About that last page, I've only read MTMTE and Lost Light so it didn't have much weight besides "Oh that's Scorponok, I've heard people say that he's been gone awhile. I'd like to see him appear more in Lost Light for sure.
Click here to view additional comments about this topic at the Energon Pub Forums ...