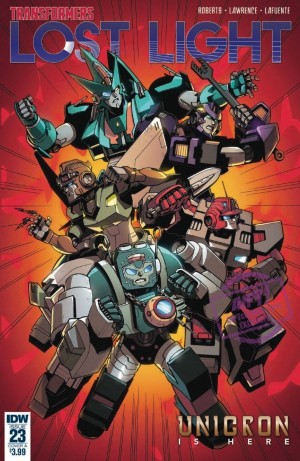 Thanks to regular source for our Transformers comics news from IDW Publishing, Adventures in Poor Taste, we have the first full preview of next week's issue #23 of ongoing series Transformers: Lost Light - which obviously means plenty of spoilers for trade readers, as all of issue 22's reveals are shown again in these opening pages.

So you have been warned!

Transformers: Lost Light #23
The final battle is here! Bots will live, bots will die, and the craziness can only increase! We’re halfway through a finale six years in the making! And if you’ve ever loved a bot, you won’t want to miss this. 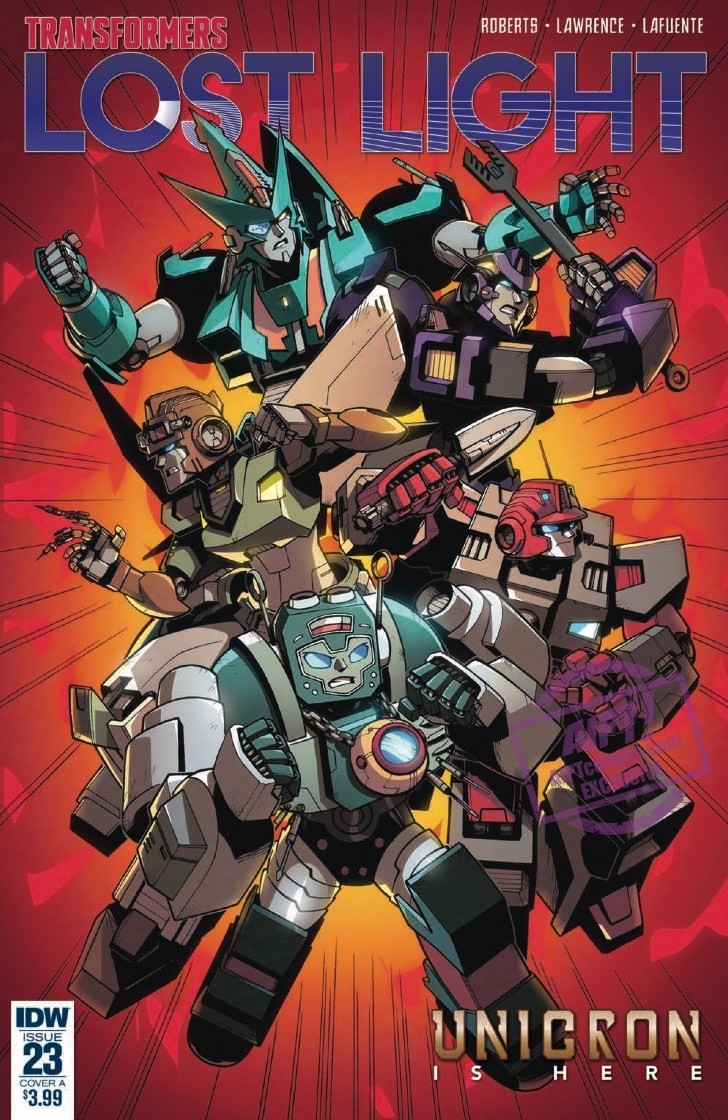 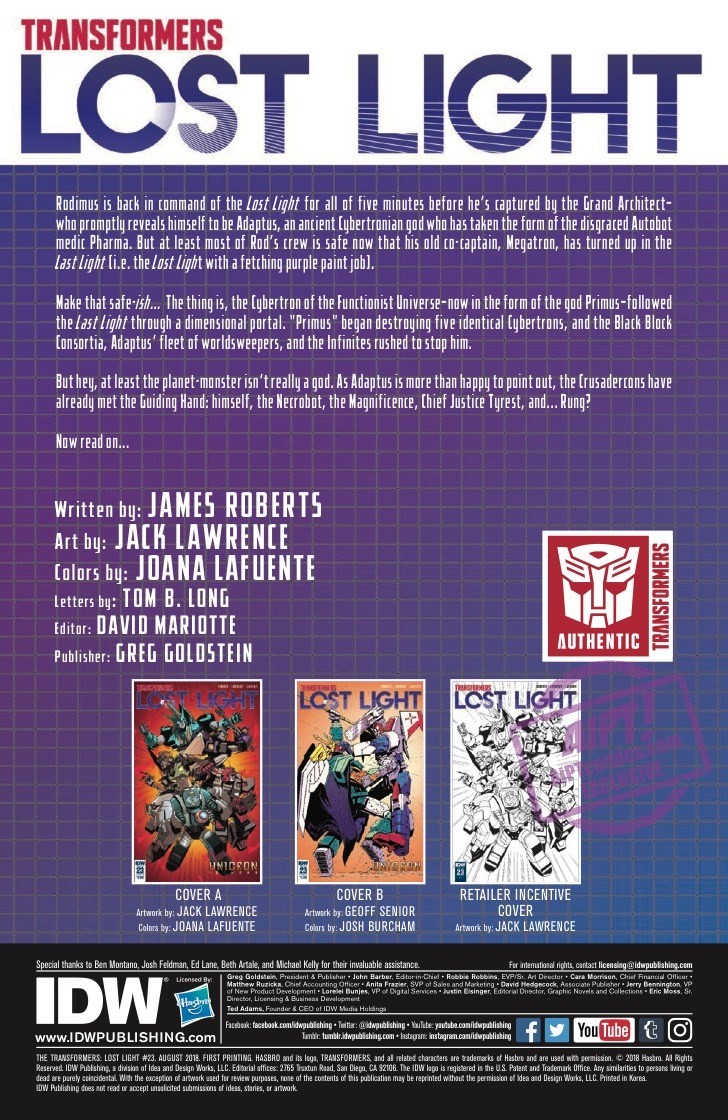 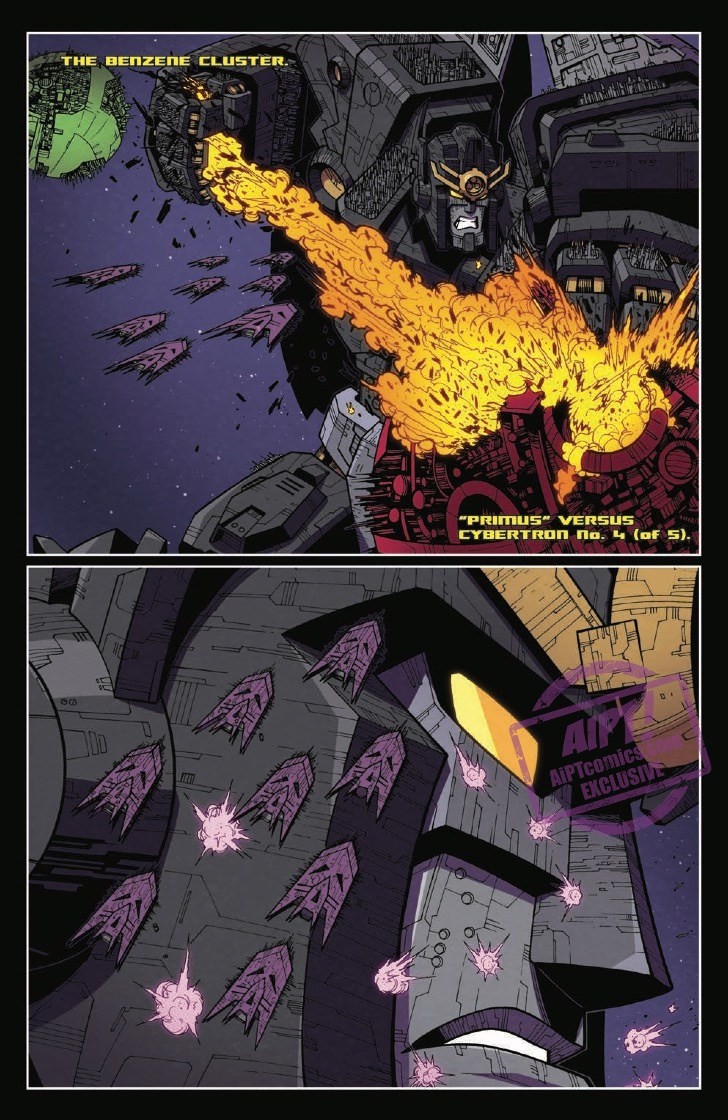 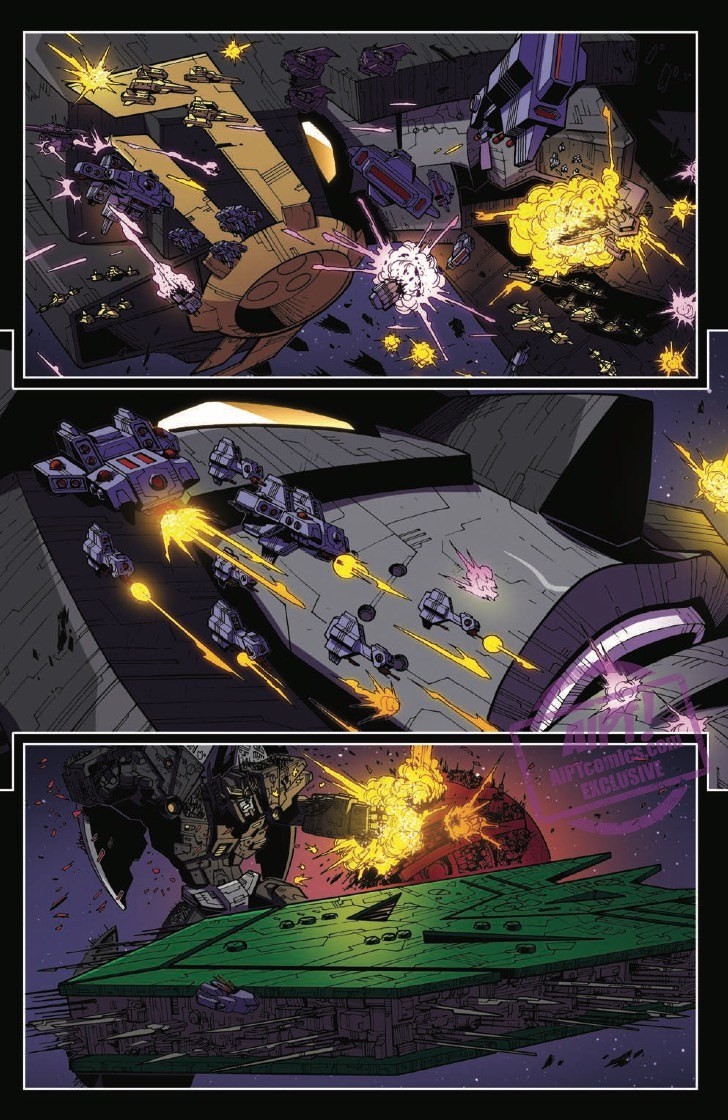 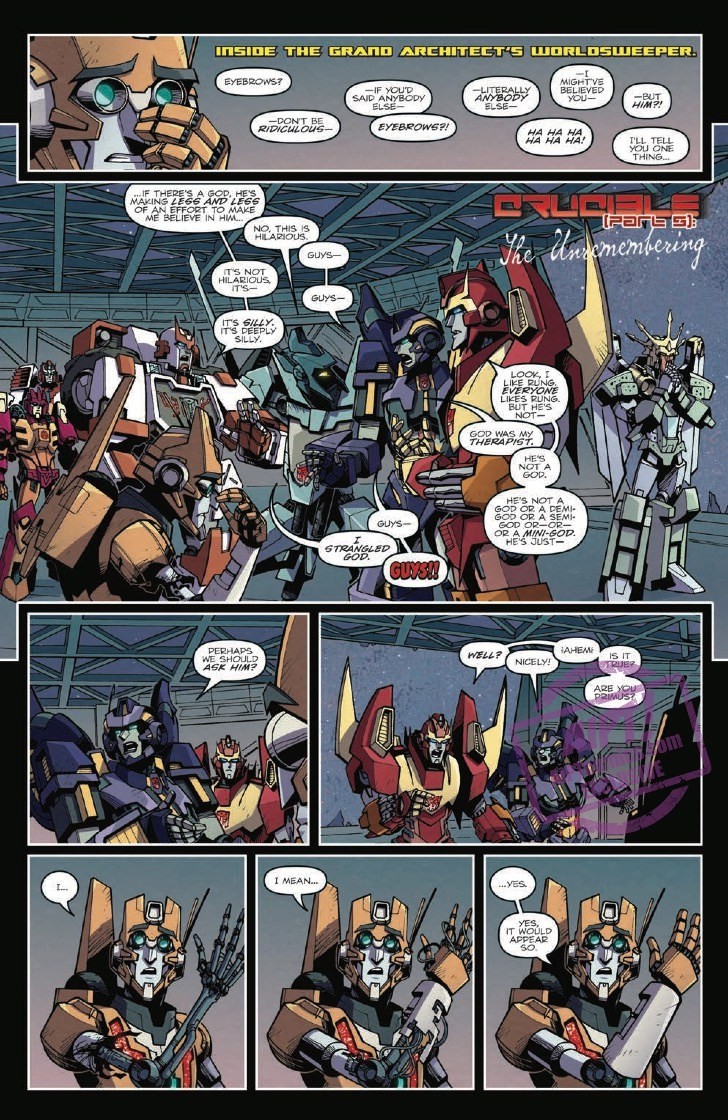 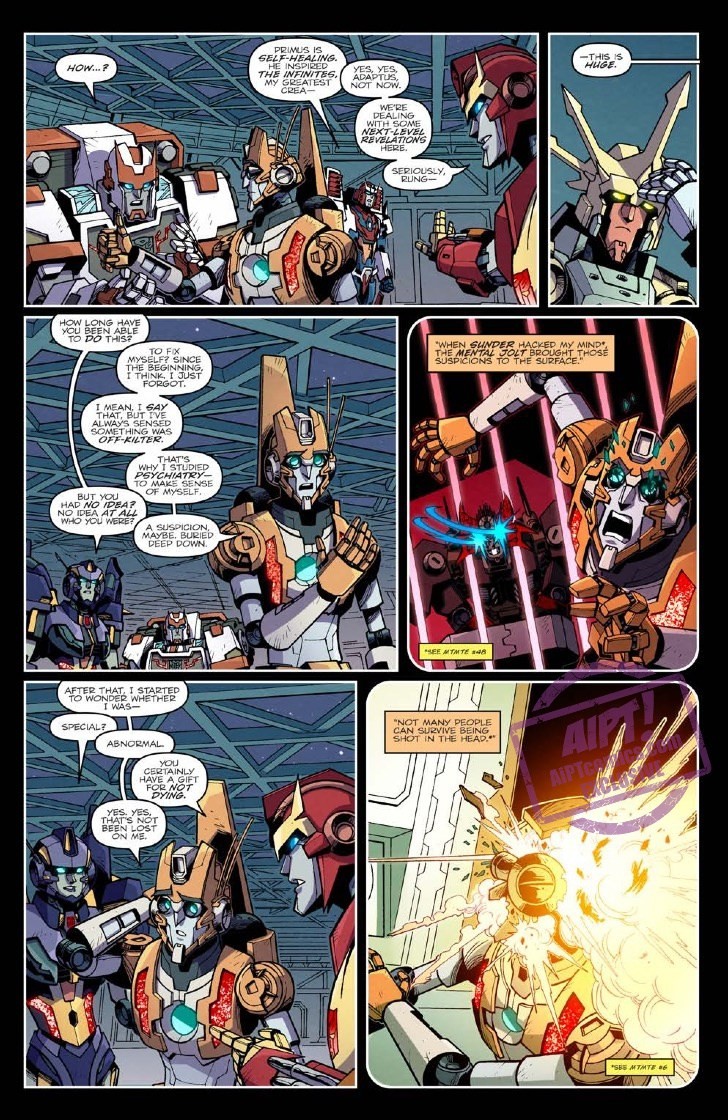 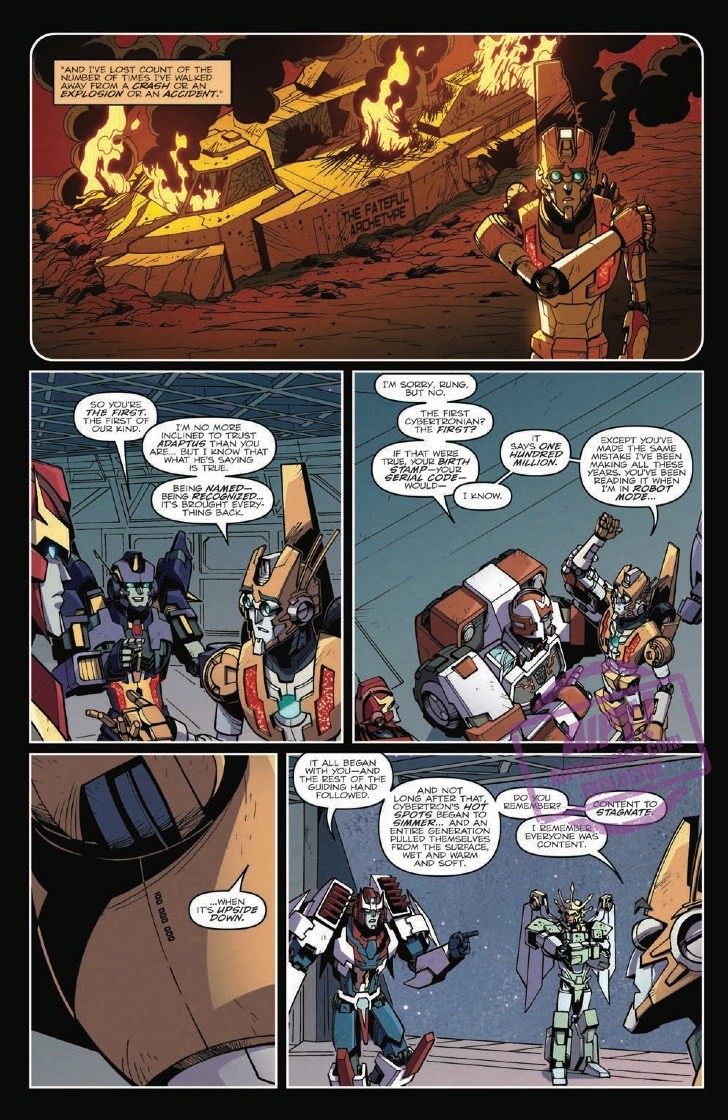 Diaboragon wrote:Christ, how many times have we gone through these revelations about how gosh-darn special Rung is. Being handed all these plot powers, he's like the Kirito of transformers now.

Though that's unless Rung can choose to not heal himself.

He didn’t know he was Primes. Rung said he’s only self healing under the realization last issue the council listed rung as one of bots in megatrons circle they killed so it’s possible he did survive and was killed later but he’s dead.

Remember back in season 2 in MTMTE whrn rewind said they “lost” Rung?! That still hasn’t come back.

Probably won’t though. Ya know..three issues left lol
Re: Full Spoiler Preview for IDW Transformers: Lost Light #23 (1981700)
Posted by ScottyP on September 1st, 2018 @ 11:29am CDT
While Transformers fans won't be able to experience IDW Publishing's Transformers: Lost Light #23 until next Wednesday, Previews has posted the Geoff Senior "B" cover for the series' 24th issue. Anyone familiar with Lost Light author James Roberts will not be surprised by the homage on this cover, featuring Autobot psychiatrist Rung! 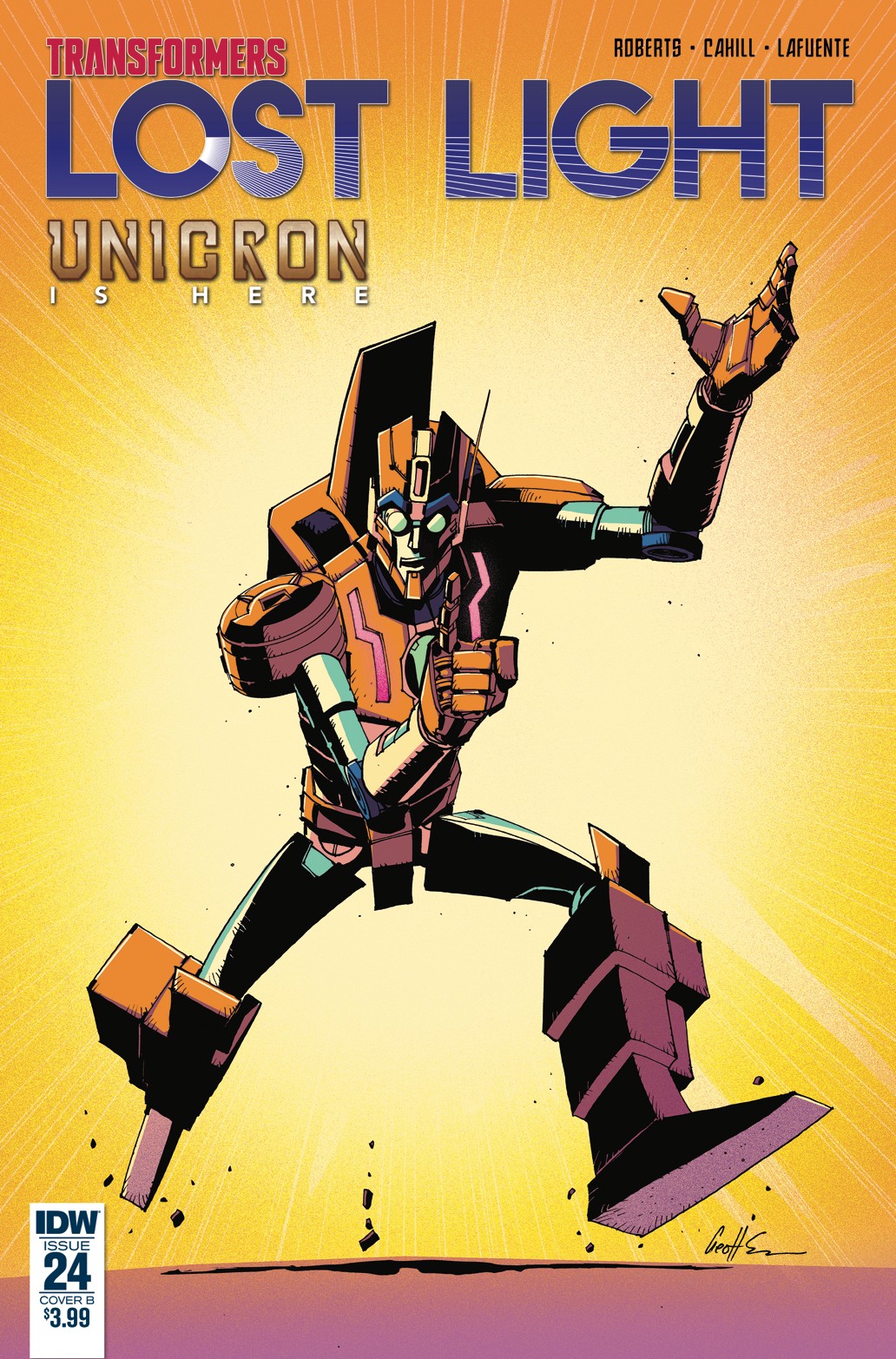 This is, of course, inspired by the cover to Marvel UK's The Transformers #113, an issue notable for introducing the world to Death's Head as he tracks down a bounty posted by Autobot leader Rodimus Prime. 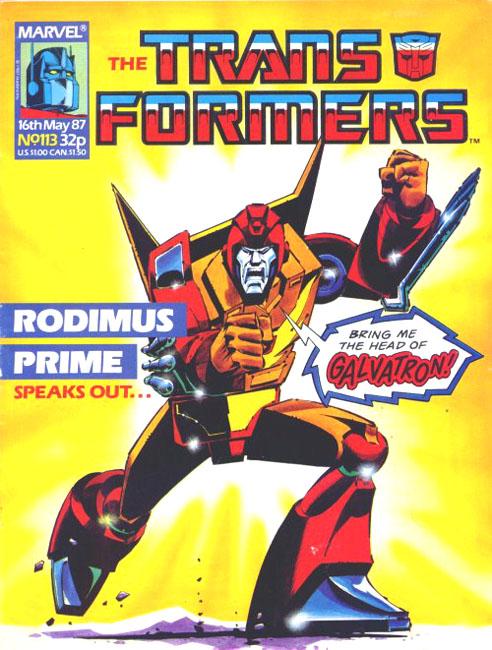 You'll be able to pick this cover up from your local comic shop on September 26th, 2018*

*(scheduled publication date as of this writing and is subject to change)
Re: Full Spoiler Preview for IDW Transformers: Lost Light #23 (1981706)
Posted by Carnivius_Prime on September 1st, 2018 @ 12:54pm CDT
Well, Senior's drawing style is great as usual but that character can't even come close to reproducing the awesomeness of the Rodimus Prime cover which I had two copies of when I was a kid. I had my reserved copy as per usual every Saturday and then I loved the cover so much I went back to the newsagents later on in the day and bought another just to stick the cover on my wall.

Agent 53 wrote:I wonder if the symbolism here was intentional
To elaborate I recall reading once that one depiction of Primus used the design of Rodimus as a starting point (If I'm right his astral plane form)
Now we have Rung, who was confirmed to be Primus last issue, drawn to adopt the same pose Rodimus once had on a cover.
Coincidence? I think not!

Though that's unless Rung can choose to not heal himself.

He didn’t know he was Primes. Rung said he’s only self healing under the realization last issue the council listed rung as one of bots in megatrons circle they killed so it’s possible he did survive and was killed later but he’s dead.

Remember back in season 2 in MTMTE whrn rewind said they “lost” Rung?! That still hasn’t come back.

Not quite correct, since Rung was able to self heal after being shot in the head way back in MTMTE season 1 and another incident is mentioned with a crashed ship prior to that.

So basically, it could very well be that alt-universe rung is somewhere on Cybertron right now just laying low. That the death the council mentioned was Rung being blown up by the moon back in Lost Light #6.
Re: Full Spoiler Preview for IDW Transformers: Lost Light #23 (1982276)
Posted by Va'al on September 4th, 2018 @ 10:33pm CDT
A Tale of Two Primuseses
(Spoiler free-ish)

Synopsis
The final battle is here! Bots will live, bots will die, and the craziness can only increase! We’re halfway through a finale six years in the making! And if you’ve ever loved a bot, you won’t want to miss this.

Story
We return this month and issue to a one voiced review, though still informed by a modicum of staff discussion to feed into a more balanced overview of the story being told for this number of Lost Light, as we get ever closer to the finale of the entire ..thing. Read on below, crusadercons!

First thing to come up: my misgivings from the previous issue are not erased, and they still inform my base reading of any of the stories told in this narrative thread - however, there are some moments and developments in this issue specifically that seem to put in discussion those very same issues I tried to raise myself in terms of legitimisation. 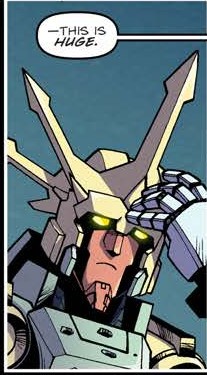 Though the expected ups and downs in terms of tone that characterises a lot of James Roberts' writing on the series is present, the general pacing and overall tone does not seem to fall into too many juxtaposed moments, egged on by the sense of urgency that is palpable even just in the silent opening pages of the issue, and some of the major interactions among the cast.

The characters, of course, placed in this framework each get their moment to shine, or at least glimmer, with some chilling one liners, some moments that mark out the 'ending' feeling of book, and some Spinisters along for the ride, but few contributions feel forced or irrelevant to the story and pacing.

Jack Lawrence is doing some incredible work on this issue in particular, and at this point I am no longer able to praise him enough and to say that 'this issue is the best one in his development on the series' - as that just seems to be the case with each new issue he works on the interiors. But just the opening, in its silent scripting, should prove my point enough. 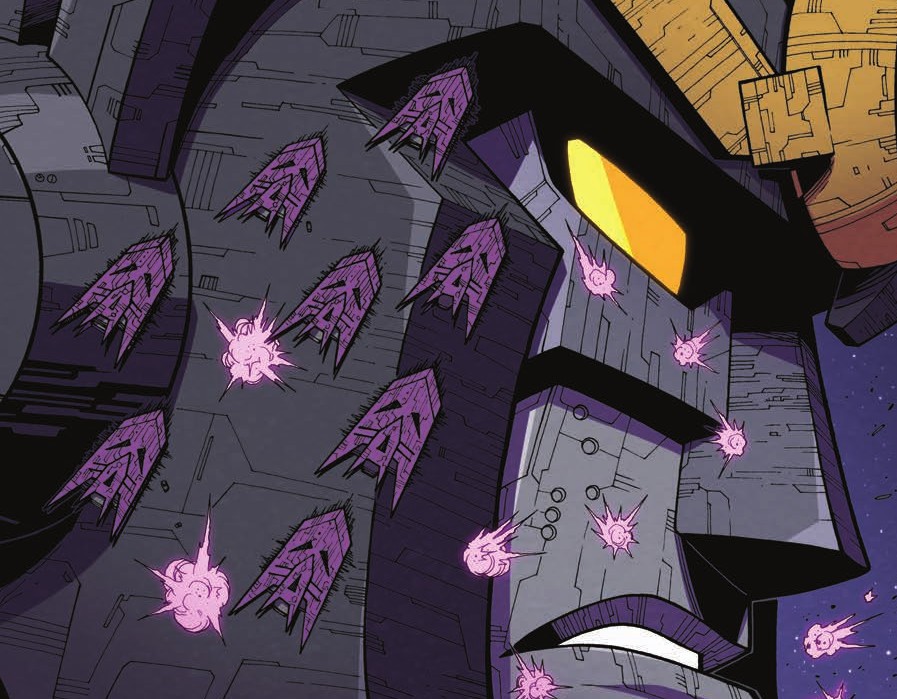 The colours that Joana Lafuente once more provides are pretty excellent too, with the shades changing between external and internal scenes, and some truly spectacular shimmering work displayed in some pivotal moments in flashbacks and present day scenes, especially with the Functionist Primus attack.

Furtis Candango and Tom B Long are doing some pretty spectacular work, already from the title page onwards, and they're clearly having all the fun that they can outside of the silent pages: the fontwork is exciting, and more of it sneaks into conversations with loud audiences than previously, too.

All the covers, as usual, can be found in our Vector Sigma Database entry here, though the one spotlighted in the thumbnail is the Geoff Senior / Josh Burcham variant featuring Pharma and Tyrest, which may or may not directly relate to the story itself.

Reading this issue alongside Optimus Prime #23, or indeed Unicron #4, is interesting, as the pacing seems to be very similar for all three, though the two ongoings are the ones with the most parallels (planet formers doing damage, fast pacing with significant moments on practically each page, lots of threads reaching a conclusion) - and in some ways, Lost Light has a more tonally streamlined, due to its established ensemble cast by now, than OP. 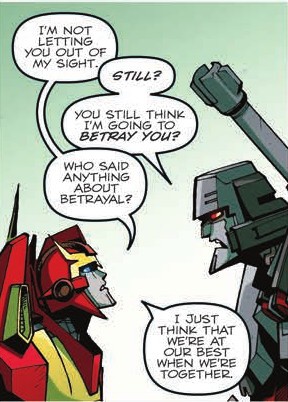 There is some material that feels like a late addition to the story, admittedly, but it works relatively well with how a certain progression of a subplot (so far) was handled, and sets up well the coming two issues without detracting too much from the Guiding Hand storyline. What's more, the book is visually stunning, and I can't not repeat this - I will be really interested in looking at how the trade works with the alternating artists at this stage, but what we're getting so far is magnificent.

Re: Full Spoiler Preview for IDW Transformers: Lost Light #23 (1982277)
Posted by william-james88 on September 4th, 2018 @ 10:39pm CDT
Did anyone think that bit where Nickel destroys the magnificence to be an homage to that Mr Hyde vs alien battle in Alan Moore's League of Extraordinary Gentlemen vol 2?

Also, I must say, I am quite happy that even though the 13 turned out to be fake/not real, there are still gods within this TF universe. I have always liked the religious aspect and themes in Transformers so I am glad it was not all taken down.
Re: Full Spoiler Preview for IDW Transformers: Lost Light #23 (1982303)
Posted by ZeroWolf on September 5th, 2018 @ 2:57am CDT
Actually I'm happy that the gods that were introduced first were the real ones, it seemed like they were going to be supplanted by the Primes. Is there a reason these reviews haven't been front paged?
Re: Full Spoiler Preview for IDW Transformers: Lost Light #23 (1982305)
Posted by Ishin Ookami on September 5th, 2018 @ 3:43am CDT
I liked it. I think things moved a bit too fast, I'd have liked to see major events like pharma and tyrist killing eachother and nikel crushing the posessed magnificence spaced out a bit more. That was definitely rushed as was the introduction of the idea of the Omega Guardians and the explanation as too just what the warren is

That said, i'm eager to see how this all ends. Does anyone know why this issue wasn't two weeks apart from the last one? And are we returning to that schedule again or do we wait until November to see how this all wraps up?
Re: Full Spoiler Preview for IDW Transformers: Lost Light #23 (1982331)
Posted by Randomhero on September 5th, 2018 @ 8:10am CDT
I’ve not sure how I feel about this finale now. This is so rushed it’s really taking me out of the series. It’s “here’s the main villain! Nope never mind! Here’s the main villain! Never mind here’s the real villain! NOPE! Nevermind! HERE IS THE MAIN VILLAIN!

It was great to get all issues this week but after reading them last night I felt like “...bleh!” Not strong issues the start the month.
Re: Full Spoiler Preview for IDW Transformers: Lost Light #23 (1982332)
Posted by william-james88 on September 5th, 2018 @ 8:22am CDT
Just to be sure, Pharma was NOT Adaptus in hiding right? Every other god was hiding within another character because they had forgotten who they were, but adaptus never forgot right?

And yes, this all feels rushed. Does the reveal of the omega guardians gel well with what we learn of them in the Unicron series?
Click here to view additional comments about this topic at the Energon Pub Forums ...