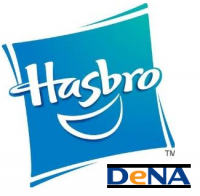 DeNa has signed a three year deal with Hasbro to release mobile device video games based on the Transformers franchise, see press release below:

DeNA Co., Ltd. (TSE:2432) and Hasbro (HAS) have entered into an exclusive three-year agreement to develop and publish mobile games based on the TRANSFORMERS™ franchise. The first TRANSFORMERS game from DeNA will be released on the Mobage™ social gaming platform for iOS and Android mobile devices worldwide, with the exception of Japan, later this year.

“Our global platform has continued to thrive and grow, and we’re now investing in major entertainment IP,” said Neil Young, Director of DeNA and CEO of DeNA’s U.S. subsidiary ngmoco, LLC. “TRANSFORMERS is a highly beloved brand, with dynamic characters that are universally cherished by fans. We are excited to bring the TRANSFORMERS world to life for mobile gamers.”

“DeNA is a proven global leader in mobile social games,” said Mark Blecher, GM and SVP, Hasbro Digital Media and Marketing. “We’re delighted to team-up with DeNA to offer a compelling TRANSFORMERS experience on the leading mobile platforms. DeNA’s innovative approach to mobile gaming is a great fit with the TRANSFORMERS brand.”

DeNA Co., Ltd. is a global Internet company focused on social games, e-commerce and other Web services for mobile devices and PCs. DeNA’s current flagship business is its mobile social games platform Mobage, which offers first-, second- and third-party games on four localized user networks across Japan, China, South Korea and the rest of the world. The original Mobage network in Japan currently serves over 40 million registered users with more than 2,000 titles. Founded in 1999 as a small startup in Tokyo, DeNA currently has over 1,800 employees worldwide working at offices and development studios in 16 cities across 11 countries and regions. The company generated annual sales of more than 1.8 billion U.S. dollars in the fiscal year ended March 2012. DeNA is listed on the Tokyo stock exchange (2432). For more information, visit http://www.dena.jp/intl.

Mobage hosts over 50 third-party developer and ngmoco-developed games, with many more titles in development. ngmoco’s mobile social entertainment network offers chart-topping apps including Tiny Tower, Rage of Bahamut, Ninja Royale™ and many popular games. Mobage supports games for everyone from city building games like We Rule®, to casual games such as Zombie Farm® and Tiny Chef™, classic games including Blackjack!, Touch Hockey®, to core-game titles such as Quests & Sorcery™, DragonCraft™ and Blood Brothers™. Mobage games are available on the Apple App Store and Google Play. Mobage offers developers access to a suite of features to enhance their mobile and social gaming experience, including a payment API, marketing support and analytics tools. To learn more about Mobage, visit: http://mobage.com or contact gamemakers@ngmoco.com.

First introduced in 1984 by Hasbro and Takara Tomy, the TRANSFORMERS brand has provided kids with hours of MORE THAN MEETS THE EYE fun with their action figures that convert from robot to vehicles and back again. Legions of kids around the world grew up creating fantastic adventures and battles set on both the planet CYBERTRON and Earth that featured the "good-guy" AUTOBOTS and the "bad-guy" DECEPTICONS. Since then, more than 7,500 robots have been introduced in animated TV series, comic books and three live-action feature films.

Hasbro, Inc. (HAS) is a branded play company providing children and families around the world with a wide range of immersive entertainment offerings based on the Company's world class brand portfolio. From toys and games, to television programming, motion pictures, digital gaming and a comprehensive licensing program, Hasbro strives to delight its global customers with well-known and beloved brands such as TRANSFORMERS, LITTLEST PET SHOP, NERF, PLAYSKOOL, MY LITTLE PONY, G.I. JOE, MAGIC: THE GATHERING and MONOPOLY. The Company's Hasbro Studios develops and produces television programming for markets around the world. The Hub TV Network is part of a multi-platform joint venture between Hasbro and Discovery Communications (NASDAQ: DISCA, DISCB, DISCK), in the U.S. Through the company's deep commitment to corporate social responsibility, including philanthropy, Hasbro is helping to build a safe and sustainable world for future generations and to positively impact the lives of millions of children and families every year. It has been recognized for its efforts by being named one of the "World's Most Ethical Companies." Learn more at http://www.hasbro.com. ©2012 Hasbro, Inc. All Rights Reserved.