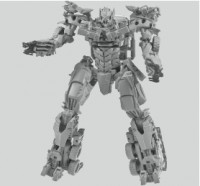 Hasbro has made an update to their documents section and it's a good one at that. Just added are the instructions to the upcoming Dark of the Moon Voyager Megatron figure. While the figure itself is nothing new for us, seeing these images of it in high resolution is. Also of note, Hasbro's is apparently making the transition from the line art in their current instructions to gray scale images of the actual toy for the upcoming movie line.

We've captures a few images from these instructions below. They can be downloaded from Hasbro's site by clicking HERE. They're over 12MBs though so they may take a few minutes to open.

Posted 2 days ago
News Categories: Toy News, Movie Related News, Cartoon News, Comic Book News, Site News, Rumors, Event News, Digital Media News, Collectables, Game News, Sponsor News, Site Articles, Store News, Company News, People News, Press Releases, Sightings, Reviews, Unlicensed Products News, Auctions, Transtopia, Interviews, Knock Offs, Collector's Club News, Editorials, Heavy Metal War, Podcast, Contests, Book News, Top Lists
Click here to post your comment about this news story!
Re: Hasbro Posts Instructions for DOTM Voyager Megatron (1205909)
Posted by Megatron Wolf on April 6th, 2011 @ 8:49pm CDT
Finally hasbros going back to showing the actual toy in the instructions, after i got the preview prime i was hoping the transition would be for all the figures. Defiantly like how they highlight the areas of the figure now in each step, no more looking at the instructions then the figure and wondering what the hell your suppose to do for that step. Well thats one good things coming out of this toy line at least, hope it stays for future lines.
Re: Hasbro Posts Instructions for DOTM Voyager Megatron (1205919)
Posted by mattyc1007 on April 6th, 2011 @ 9:12pm CDT
Even better that you can tell which angle you and the instructions are looking at compared to each other, preventing moving the wrong pieces or... even breaking them

If only they had done this for ROTF Prime, I would have saved about an hour of my life

Even better that you can tell which angle you and the instructions are looking at compared to each other, preventing moving the wrong pieces or... even breaking them

no need to feel like that ive done samething with some of my g1 combiners some pieces broke off but they got replaced.

heres to good things instructions will stay like this

It's kind of funny that these images make the figure look better than the official promo pics.

Kind of reminds me of how the old Lego insructions used to look. Still no word on why they have a picture of their figure in robot mode but with a possible remolded head for a future figure. Like what's up with that? Would not mind a Black Shadow... Generations 2.0?
Click here to view additional comments about this topic at the Energon Pub Forums ...