HASBRO Q / A: Next Round Questions Due Monday 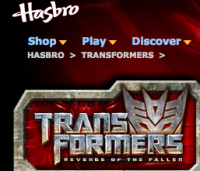 Submit your questions regarding the recent Transformers toys here.

Three of the questions submitted by our resourceful community will be chosen to be sent into HASBRO to have the answers returned at the end of the month.

Thanks for your participation. We look forward to hearing your questions!

2: I have a few considerations for toys in the future of ROTF, and I'm wondering if you'd like to use them:

Could a robot points system or Hasbrotoyshop.com codes be included with future toy lines as well?
Re: HASBRO Q / A: Next Round Questions Due Monday (949704)
Posted by Moon on July 6th, 2009 @ 10:54pm CDT
1. Whats the word with the new Animated stuff you showed off at BotCon? Mostly Rodimus Minor, Arcee, Blackout, Wingblade Prime and Hydrodrive Bumblebee.

2. Is the US going to see a Legends Devastator release?

3. Any new remolds for any Beast Wars figures like with Cheetor and Dinobot in the Universe Line?

4. Anymore Leader class RotF figures coming out? I heard a rumor about a Leader Starscream and I would like to see some more.
Re: HASBRO Q / A: Next Round Questions Due Monday (949709)
Posted by capellamusic on July 6th, 2009 @ 11:03pm CDT
1 - ROTF line: Is Wheelie planned for a Legends and/or Scout class release?

2 - Since Masterpiece Skywarp was announced, will we also see Masterpiece Thundercracker and Grimlock in future released by Hasbro, and maybe a slightly modified Megatron (a shade of white instead of silver, with an orange tip)?

(He's the ONLY one that has yet to receive such a treatment.)

2.is there any plans for another tf cartoon in the distant future?

3.will there be a larger toy for hightower and scraper in the rotf line?

4.is there any chance at all of hasbro getting distribution rights for other robot shows for an american release(mazinger z,and getter robo for example),or is transformers going to be the only one you make?

5.will scott mcniel be returning to transformers in any form?

Thanks very much.
Click here to view additional comments about this topic at the Energon Pub Forums ...