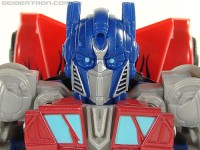 Seibertron has posted new galleries of the HFTD Activator Optimus Prime, Bumblebee and Megatron figures. Check out all of the galleries below.

Optimus Prime believes that freedom is the most important thing in the galaxy. He battles to preserve the liberty of all creatures from Megatron. He dreams of peace, but will never stop fighting until the cosmos is safe. Speed, stealth and power are the three words by which Bumblebee lives his life. Hs vehicle mode is built to be as fast as possible, while he trains constantly in robot mode to be silent and strong. He may not be the biggest Autobot there is, but he's definitely one of the best. Megatron has worked for years to accomplish his evil ends. His body is a living weapon, designed for one purpose - to conquer the universe. He has been defeated many times, but never beaten for good. He will fight forever until the Autobots are destroyed and he rules over all. A mouthless or bug-like face is one thing, and entirely workable, but now whenever I see that face, I hear his radio tuning in sfx for Maggie from a Simpsons episode.

That said, I do have the F.A.B. Megs, and it's yet another interesting take on his design.
Re: Hunt For the Decepticons Activators Galleries Now Online (1113916)
Posted by Atomatron on August 16th, 2010 @ 7:19pm CDT
Activators very nice for Animated. Epic Fail for Movieverse.