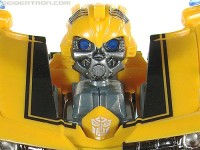 Seibertron has posted four fantastic galleries of Hunt For the Decepticons Deluxe Wave 1. These galleries consist of Battle Blade Bumblebee, Ironhide, Jetblade and Sea Attack Ravage. See each of the galleries below!

Bumblebee is used to the odds being against him. This time is no different than any of dozens of other fights he's been in. As Ravage and Insecticon circle him in the gloom, he focuses all his energy on being ready for the attack he knows is coming. Ironhide is always looking for a challenge, which is why he volunteered to hunt Hailstorm solo. The two used to be in some of the same weapons clubs back on Cybertron, so Ironhide knows exactly how dangerous the Decepticon weapons specialist is. He's looking forward to the chance to test his new weaponry against a guy with as much firepower as Hailstorm. Jetblade has been hiding out for years among human fighter planes. It was only recently that he hooked up with Terradive, and the two became instant friends, vowing to remain hidden until the time was right. Even so, the temptation to catch the slow-moving Tomahawk out in the open was too much for the two dangerous Decepticons. Ravage has been beaten by Bumblebee enough times to know he'll never win a straight fight. That's why he enlisted Insecticon to help him stalk the Autobot warrior. The two beast-bots stalk through the shadows, remaining hidden and letting the brash, yellow robot come to them. Posted 3 days ago
News Categories: Toy News, Movie Related News, Cartoon News, Comic Book News, Site News, Rumors, Event News, Digital Media News, Collectables, Game News, Sponsor News, Site Articles, Store News, Company News, People News, Press Releases, Sightings, Reviews, Unlicensed Products News, Auctions, Transtopia, Interviews, Knock Offs, Collector's Club News, Editorials, Heavy Metal War, Podcast, Contests, Book News, Top Lists
Click here to post your comment about this news story!
Re: Hunt For The Decepticons Deluxe Wave 1 Galleries Now Online! (1115287)
Posted by Megazarak on August 19th, 2010 @ 9:21pm CDT
I like all of those figures except Ravage since I don't need another. I'd personally like to wait for the red repaint of Ironhide that's been rumoured to be released (it really is about time they make him red). I would also like if they repainted BBBB as Cliffjumper, maybe flip his axe around and put it on his other hand, or even give him a different bladed weapon. It has been a while since a movie BB has been repainted as Cliffjumper.
Re: Hunt For The Decepticons Deluxe Wave 1 Galleries Now Online! (1115305)
Posted by Joker'sRequiem on August 19th, 2010 @ 10:20pm CDT
Ravage is a pass for me. BB's new mold might be enough to get me to buy him, considering I haven't picked a new one up since the first movie line. Ironhide doesn't really entice me much when I own his Voyager counterpart, but he looks decent none the less. The only one I seriously plan to buy is Jet Blade because, frankly, I love Decepticon Jets.
Re: Hunt For The Decepticons Deluxe Wave 1 Galleries Now Online! (1115401)
Posted by dragons on August 20th, 2010 @ 6:23am CDT

It has been a while since a movie BB has been repainted as Cliffjumper.


a while feels almost ten years only movie bumblebee repints have seen repainted into cliffjumper was very first bumblebee with & without allspark blue but i dont shop much for legend class figures i wouldnt know if there have been repaints of cliffjumper in legend class.

Strange thing is happening in The Netherlands, Movie deluxes have raised in price from 17,99 to 19,99 euro's! Even the non Hunt for the Decepticons. So if you bought them earlier you saved 2 euro's. Crazy.

I think I'm going to get jetblade, but I think the colour's a bit to "Autobot". Hope it gets a darker repaint.
Re: Hunt For The Decepticons Deluxe Wave 1 Galleries Now Online! (1116302)
Posted by I AM MEGATRON on August 22nd, 2010 @ 4:46pm CDT
I bought Battle Blade Bumblebee today, it's the first Transformer I've bought since I was little.

Took me forever to get him into car mode.