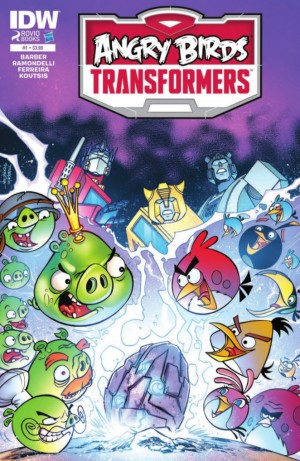 If you haven't been following our news coverage recently, you might have missed (hard to, really) the announcements and teasers about the new Angry Birds / Transformers crossover - wich span so wide they include toys, a videogame, soundtrack with Vince DiCola and, of course, IDW comics. Check out below a preview of the first issue, out in shops and digitally this week!

Angry Birds/Transformers #1 (of 4)—SPOTLIGHT
John Barber (w) • Marcelo Ferreira & Livio Ramondelli (a) • Marcelo Ferreira (c)
You got TRANSFORMERS in my Angry Birds! No, you got Angry Birds in my TRANSFORMERS! ERGH, OOF, MPPHH!!! Hey! Waitaminit! This is actually pretty great! That’s right, comic lovers, two of your favorite IDW comics have morphed into one amazing new comic! When the TRANSFORMERS lose their powerful ALLSPARK, it ends up on Piggie Island and the world of Angry Birds turns robotic! Prepare to meet… the AUTOBIRDS and DECEPTIHOGS!
FC • 32 pages • $3.99

gothsaurus wrote:I wish IDW would stick with ONE ARTIST per comic. These styles are so different they don't look good together. Same complaint for Robots in Disguise series.

well, given the context, the "serious" art and the "cartoon" art make sense IMO
Re: IDW Angry Birds Transformers #1 Full Preview (1624282)
Posted by gothsaurus on November 24th, 2014 @ 1:08pm CST
I "get it"... just don't think it looks good together. (I'm a designer and artist by trade.) Would be like flipping between Shakespeare and the Sunday funnies... I like both of them, just not on opposing pages of a book. Same with Indian food and Mexican food, etc.
Re: IDW Angry Birds Transformers #1 Full Preview (1624292)
Posted by Peridot on November 24th, 2014 @ 1:54pm CST
What continuity is this? They mostly look G1, but Bumblebee (with his original Volkswagen robot mode, no less!) turns into a Camaro, Drift looks like his AOE counterpart, Lockdown is a G1-ified version of the AOE design, Heatwave exists, and the Allspark appears to be the TF: Animated version. Strange.

As an aside: anyone else really disappointed with AoE Drift's stereotypical samurai? I mean. Not subtle. At least IDW Drift doesn't hit you over the head with the concept.
Re: IDW Angry Birds Transformers #1 Full Preview (1624315)
Posted by Sabrblade on November 24th, 2014 @ 3:05pm CST

Metro Prime wrote:What continuity is this? They mostly look G1, but Bumblebee (with his original Volkswagen robot mode, no less!) turns into a Camaro, Drift looks like his AOE counterpart, Lockdown is a G1-ified version of the AOE design, Heatwave exists, and the Allspark appears to be the TF: Animated version. Strange.

Finally, we have the aligned continuity we've all wanted!
Re: IDW Angry Birds Transformers #1 Full Preview (1624930)
Posted by Va'al on November 26th, 2014 @ 4:49pm CST
Review is coming, by the way, I'm just a bit stuck with connection issues and time.

DarkEnergon wrote:Finally, we have the aligned continuity we've all wanted!

No we already had that. It was called Transformers Animated.

Burn wrote:It's not a book to be taken seriously.

Synopsis
You got TRANSFORMERS in my Angry Birds! No, you got Angry Birds in my TRANSFORMERS! ERGH, OOF, MPPHH!!! Hey! Waitaminit! This is actually pretty great! That’s right, comic lovers, two of your favorite IDW comics have morphed into one amazing new comic! When the TRANSFORMERS lose their powerful ALLSPARK, it ends up on Piggie Island and the world of Angry Birds turns robotic! Prepare to meet… the AUTOBIRDS and DECEPTIHOGS!

Philip K. Dick would be hogrified

Before time began, there was the egg. Or maybe it was the bird. The egg, or the bird, what came first..? In any case, there was an egg, and a green pig wanted to eat it. To eat all of them. As they do. Apparently. But the egg was also a cube, and the cube fell, rolled away, and became an egg. With the properties of a cube.

John Barber is having a lot of fun with the script here, letting puns rip every other panel, juggling multiple identities, continuities, storylines and characterisations that fans of the Transformers franchise of the past decade will recognise, and aiming for a fairly contemporary target (with some nods to older fans too).

There is very little one can do to spoil the issue, but I am not going to simply summarise the story of the comic, and I am actually quite glad something as light-hearted and - simply put - silly as this actually exists out there, reminding fans that kids are into our favourite robots too. And the transition page is really quite clever, verbally.

The comic uses Livio Ramondelli to introduce and frame the story as part of a spin-off universe of the Transformers, something based on modern iterations of the Cybertronians, from Bayverse to Rescue Bots and some added G1 highlights to please a bit of everyone. And it works.

The artists who will be gracing the pages of the series from here on, however, are a great addition to my knowledge of visual creators: Marcelo Ferreira has a great sense of visual humour, in facial expressions, character, dynamism and page layout - and the cartoon style art is perfectly apt in tone for the series.

And of course, all of it catches the eye even more thanks to the wonderful colour work by Nikos Koutsis, making sure all characters jump off the page, vibrantly and energetically, and Chris Mowry's brilliant lettering work, letting himself really go on the fun aspect of the job. Plus, the comic comes with three fantastic covers, that further show off the glorious silliness of the crossover, with Ramondelli, Ferreira and Koutsis being joined by action-packed Jorge Pacheco's variant (thumbnail).

I don't believe anyone was expecting a masterpiece of storytelling or the new rising star of the comics medium, but the issue is a whole lotta fun, pleasingly funny, enjoyably silly and most importantly, never takes itself seriously - something that the IDW Transformers titles can sometimes fall victims of (though less so as series progress).

The art is also extremely refreshing, and the framing of the story by a Transformers regular sets the scene nicely for the very cartoony, series-appropriate Ferreira and Koutis approach to the illustration. The lettering is fun, the writing is fun, the issue is, overall a non-serious

gopalkrishnan wrote:I am excited for the book's release. Angry Birds and Transformers. What a deadly combination.

I am loving everything about this game and the whole crossover. Its good not to take things too seriously sometimes; at the same time there is some much history and nostalgia mixed in its just amazing!
Re: IDW Angry Birds Transformers #1 Full Preview (1628409)
Posted by Va'al on December 9th, 2014 @ 3:30am CST
Ready to return to Piggy Island with the Eggspark, Autobirds and Deceptihogs? Check out below a full preview of this week's IDW Publishing release of Angry Birds Transformers #2, and if you can contain your eggcitement, head back here later this week for a Seibertron.com review.

Angry Birds/Transformers #2 (of 4)
John Barber (w) • Marcelo Ferreira (a & c)
With the fate of Piggy Island hanging in the balance, will this be the Age of EGGStinction!? Continuing the craziest crossover this side of CYBERTRON!
FC • 32 pages • $3.99

RAMP-EGG! When the Angry Birds’ precious eggs become leg-having, weapon-bearing rampaging eggs of mass destruction, the Autobirds must team up with the Deceptihogs to save Piggy Island! How much more mixed-up can this mash-up possibly get?!