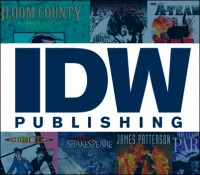 
San Diego, CA (July 12, 2011)—IDW Publishing, a leader in graphic novel and book publishing, announced today that former Marvel comics editor and creator John Barber has joined the company as a senior editor. With over ten years in and around comics, Mr. Barber joins IDW Publishing to head the company’s Hasbro licensed titles, as well as other projects. A New York Times best-seller for his TRANSFORMERS: DARK OF THE MOON movie adaptation, Mr. Barber will also continue to write comics for IDW, including the upcoming TRANSFORMERS #125 with James Roberts and another title to be announced at Comic-Con later this month.

“John is a great addition to IDW’s editorial team,” said Chris Ryall, IDW’s Chief Creative Office/Editor-in-Chief. “I’ve been impressed not only by the books he helmed at Marvel, but also by the projects he’s worked on since then, such as Kick-Ass and Turf. Add to that the fact that he was already part of our developing TRANSFORMERS writing team and you have a pretty perfect fit on all counts.”

Prior to joining IDW, Mr. Barber served as an editor at Marvel for six years, working on titles such as the Ultimate line of comics, Stephen King’s Dark Tower, the Eisner-nominated “Old Man Logan,” and the Marvel Comics Presents series. In addition to writing TRANSFORMERS: DARK OF THE MOON movie-related comics for IDW, Mr. Barber has also authored numerous stores in the Marvel Universe.

“This is a great opportunity. I was perfectly content living the freelance life, but when the possibility of joining the IDW editorial team came up, I jumped at the chance,” said Barber. “There's nothing I like more than creating exciting comic books, and that's what this job is all about. Throw in getting to work with Chris and all the members of this amazing editorial staff, plus all the incredibly talented creative teams and all the amazing properties IDW publishes--and you've got a happy John Barber.”

IDW Publishing also announced today the promotion of Tom Waltz to the company’s first senior staff writer position, in addition to his duties as editor, and the expansion of the company’s book department with long-time IDW employee Alonzo Simon becoming an assistant editor.

As editor/senior staff writer, Mr. Waltz will continue his role as editor on a wide variety of titles, including GHOSTBUSTERS, CODE WORD: GERONIMO and many of IDW’s video game-related series. Mr. Waltz will also author or co-author an increasing number of series for IDW, such as the upcoming TEENAGE MUTANT NINJA TURTLES ongoing series and other still-to-be announced projects.

As assistant editor in IDW’s book department, Mr. Simon will have a hand in many of the graphic novels and hardcover collections published by the company. Since taking over his new duties, he has already worked on upcoming releases such as INFESTATION, VOLUME 1, ARCHIE’S JOKE BOOK and GODZILLA: KINGDOM OF MONSTERS, VOLUME 1.


Visit IDWPublishing.com to learn more about the company and its top-selling books.


About IDW Publishing
IDW is an award-winning publisher of comic books, graphic novels and trade paperbacks, based in San Diego, California. Renowned for its diverse catalog of licensed and independent titles, IDW publishes some of the most successful and popular titles in the industry, including: Hasbro's The TRANSFORMERS and G.I. JOE, Paramount's Star Trek; HBO’s True Blood; the BBC's Doctor Who; Toho’s Godzilla and comics and trade collections based on novels by worldwide bestselling author, James Patterson. IDW is also home to the Library of American Comics imprint, which publishes classic comic reprints; Yoe! Books, a partnership with Yoe! Studio; and is the print publisher for EA Comics.

IDW's original horror series, 30 Days of Night, was launched as a major motion picture in October 2007 by Sony Pictures and was the #1 film in its first week of release. More information about the company can be found at IDWPublishing.com.

James Roberts is writing #125. Two thumbs up there!

It Is Him wrote:There's another fine bit of info in there.

James Roberts is writing #125. Two thumbs up there!