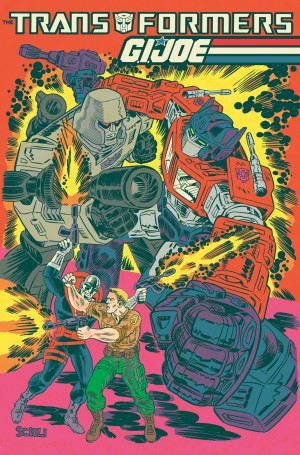 Comics Alliance is reporting that IDW Publishing has announced a new upcoming Transformers/G.I. Joe Crossover series. The series will be co-written and drawn my Tom Scioli. According to the report the Joes will be taking on the entire planet of Cybertron! More details as they emerge.

Recently, Scioli (an occasional guest contributor to ComicsAlliance) has been focusing on creator-owned webcomics like American Barbarian, Final Frontier and the Super Mario-inspired Mystery Object, but in this series, he and co-writer John Barber are taking everyone’s favorite toy franchises into a story that IDW describes as being “cosmic in scale.” From the looks of things, it’s the Joe team against the entire planet of Cybertron, and I could not be more excited about it.

This sounds and looks very cool.

I am a fan of Jack 'King' Kirby's work and Tom's seems very Kirby-esque, especially his work on Godland.

With the recent return of Andy Wildman to Regeneration One, Guido Guidi offering some Marvel-esque art and some proper old school business in the #0 from Geoff Senior, Jeff Anderson and Jose Delbo, this announcement looks set to add to those classic stylings even more so!

I wonder if Scioli will do a 'floating heads' cover ala Kirby because I love getting head!

Till all are one true believers!

I hope that's what it is because in all honesty that art is friggin' terrible. Even as an homage to the 80s series.
Re: IDW Announces New Transformers / G.I. Joe Crossover Written and Drawn by Tom Scioli (1523194)
Posted by Sabrblade on October 11th, 2013 @ 7:20am CDT

Re: IDW Announces New Transformers / G.I. Joe Crossover Written and Drawn by Tom Scioli (1523202)
Posted by El Duque on October 11th, 2013 @ 8:24am CDT
Last night we reported that IDW Publishing would be releasing an all new Transformers/G.I. Joe Crossover series drawn and co-written (along with John Barber) by Tom Scioli. We now have the official press release from IDW Publishing announcing the upcoming project, which will release next summer and will apparently be an on-going series. Check out the full press release below:


Worlds Collide In New TRANSFORMERS/G.I. JOE Ongoing Series!
The Crossover Of The Century At IDW In 2014

San Diego, CA (October 11, 2013) – Two of the most popular comic book franchises of all-time, TRANSFORMERS and G.I. JOE, will be going head-to-head in a brand-new ongoing series debuting next summer! Written and drawn by comic luminary Tom Scioli (Godland, American Barbarian) with co-writer and TRANSFORMERS veteran John Barber (TRANSFORMERS: ROBOTS IN DISGUISE, FALL OF CYBERTRON), these classic characters will explode off the page like never before!

Based on the iconic Hasbro brands, this stand-alone seriesis set to explore the intriguing encounter between these starkly different teams. Cosmic in scale, the series will utilize Scioli’s unique artwork to traverse the perils of space and pit the G.I. JOE team against the ominous threats of CYBERTRON. Featuring the characters synonymous with both TRANSFORMERS and G.I. JOE this will be a team-up for the ages!

“This is a dream project for me,” says Barber, “and I’m blown away by the imagination and the unique take that Tom Scioli is bringing to this project. It harkens back to classic comic traditions—and to the origins of the TRANSFORMERS and G.I. JOE characters—but feels constantly, irrepressibly new!”

“This feels like the comic I was born to make,” says Scioli. “We’re asking big questions. Is war an inevitable condition of life? What is free will? What is the future of man and machine as the line between them becomes increasingly blurred? The G.I. JOE team is trained to deal with dangerous situations and this is the ultimate test of their training. The TRANSFORMERS characters push the boundaries of what shapes life can take in this infinite universe of ours. Perhaps it will be a machine that teaches us what it is to be human.”

Both brands have found immense success over the decades with action figures, feature films, cartoons, comics and more; and have each found unique and avid fanbases. With influential and iconic characters, the TRANSFORMERS and G.I. JOE brands are globally renowned as multi-media powerhouses.

“We’ve been waiting for the right opportunity for this event, and the anniversary of both TRANSFORMERS and G.I.JOE in 2014 is definitely the perfect time," said Michael Kelly, Hasbro's Director of Global Publishing. "We are very excited to be working with IDW on this project, and I for one can’t wait to read the next chapter of this adventure.”

The event of the year begins next summer only at IDW!

IDW is an award-winning publisher of comic books, graphic novels and trade paperbacks, based in San Diego, California. Renowned for its diverse catalog of licensed and independent titles, IDW publishes some of the most successful and popular titles in the industry, including: Hasbro’s The TRANSFORMERS, G.I. JOE and MY LITTLE PONY; Paramount’s Star Trek; Nickelodeon’s Teenage Mutant Ninja Turtles; 2000AD’s Judge Dredd; The Rocketeer; Toho’s Godzilla; Wizards of the Coast’s Magic: The Gathering and Dungeons & Dragons; and the Eisner-Award winning Locke & Key series, created by best-selling author Joe Hill and artist Gabriel Rodriguez. IDW is also home to the Library of American Comics imprint, which publishes classic comic reprints, Yoe! Books, a partnership with Yoe! Studio, and the multiple award-winning Artist's Edition imprint.

IDW’s critically- and fan-acclaimed series are continually moving into new mediums. Currently, Jerry Bruckheimer Films and Disney are creating a feature film based on World War Robot; Dwayne "The Rock" Johnson and Warner Brothers are producing a film based on Ashley Wood's Lore; and Michael Bay‘s Platinum Dunes and Sony are bringing Zombies vs. Robots to film.

Is that the extent of TF/Joe crossovers you've seen?
Re: IDW Announces New Transformers / G.I. Joe Crossover Written and Drawn by Tom Scioli (1523259)
Posted by T-Macksimus on October 11th, 2013 @ 10:42am CDT
Not even sure why I'm asking myself the same rhetorical question that every fan of the cross-overs throughout the years has asked, especially since Hasbro will be shoving truckloads of horrid movie-verse toys down our collective throats, but I don't suppose there is any chance whatsoever that there will be any official cross-over toys produced THIS time around???

Is that the extent of TF/Joe crossovers you've seen?

Sabr - That was sarcasm. And no its not. I have all the original Marvel TF and Joe comics, including the crossovers. I was actually watching the 80s TF cartoon with my son the other day and we watched that episode. That's why it was in my head and I just wanted to make a sarcastic comment.

Is that the extent of TF/Joe crossovers you've seen?

Sabr - That was sarcasm. And no its not. I have all the original Marvel TF and Joe comics, including the crossovers. I was actually watching the 80s TF cartoon with my son the other day and we watched that episode. That's why it was in my head and I just wanted to make a sarcastic comment.

Ah, I see. Sarcasm and the Internet don't mix well without emoticons.

crossovers . The one during G2

It’s just been announced that IDW Publishing has brought in Tom Scioli to create a brand new Transformers/G.I. Joe comic. We talk about what it’s like to be handed the reigns to such iconic licences, as well as what he plans to bring to the title in terms of art and narrative. With the long-running Godland coming to a close, and Transformers/G.I. Joe on the horizon, we also take the time to talk about Tom’s career as a whole. He’s an artist who seems to always push his art in new directions, experimenting with line and color to deliver different types of stories in different ways. We’re excited for What he’s got in store for the Joes and the Autobots, and after this talk, you will be too!