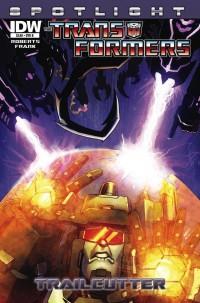 Our friends at IDW Publishing have supplied us with their Transformers solicitations for April 2013. Lots of good stuff including Transformers Spotlight: Trailcutter! Check out the covers and descriptions below.

Transformers Spotlight: Trailcutter #1
James Roberts (w) • Matt Frank (a) • Frank, Livio Ramondelli (c)
STEALTH ATTACK! Trailcutter has a problem: the Lost Light has been taken over by the Decepticons—and no one else seems to have noticed! Can the Autobots’ defense strategist singlehandedly see off an army of infiltrators? And even if he does, will it convince his crew mates that he's got more to offer than kind words and forcefields?
*2 regular covers will be shipped in a 1-to-1 ratio

Bullet points:
An all-new tale set in the midst of the ongoing More Than Meets the Eye series, written by MTMTE’s James Roberts!
Art by Mars Attacks Transformers’ Matt Frank!
The Spotlights build toward the biggest event in Transformers comic history… coming in 2013!

Transformers: More Than Meets the Eye #16
James Roberts (w) • Alex Milne (a) • Milne, Nick Roche (c)
AFTERMATH! The battle for the Lost Light is over. As the survivors bury the dead, one Autobot begins a secret journey that will change everything. This special issue marks the beginning of “Remain in Light”—the game-changing finale to the first More Than Meets The Eye mega-story arc!
*2 regular covers will be shipped in a 1-to-1 ratio

Bullet points:
Drift no more!
The calm before the storm—but on the starship Lost Light, nothing is ever very calm!
“Remain in Light” —the story everyone’s been waiting for—begins here!

Transformers: Robots in Disguise #16
John Barber (w) • Andrew Griffith (a) • Griffith, Casey Coller (c)
FINAL BATTLE! The leadership of Cybertron will be decided once and for all! It’s all-out war against the forces of MEGATRON! Will the Autobots wrest control from their attackers—or will the DECEPTICON flag fly over Cybertron forever? Heroes will fall, and nothing will stay the same.
*2 regular covers will be shipped in a 1-to-1 ratio

Bullet points:
The soul-shattering conclusion to the story began in RID #1!
The beginning of a powerful new direction—if anybody survives this issue!
Heroes will fall—and one shall lead!

Transformers Regeneration One #90
Simon Furman (w) • Andrew Wildman (a) • Wildman, Guido Guidi (c)
TOO LITTLE—TOO LATE! As Scorponok’s Dark Reign comes ever closer to spreading right across Cybertron, Grimlock launches a desperate counterstrike, in the face of almost innumerable odds. Does the Dinobot commander really have one last ace up his sleeve, or does his “plan” amount to a glorious—but doomed—last stand?
*2 regular covers will be shipped in a 1-to-1 ratio

Bullet points:
The story of the original TRANSFORMERS comics continues in full force!
Non-stop action as only the classic team of Furman & Wildman can deliver!

Transformers: Robots In Disguise, Vol. 3
John Barber (w) • Livio Ramondelli, Brendan Cahill, & Guido Guidi (a) • Tim Seeley (c)
Orion Pax—the former OPTIMUS PRIME—follows a rogue group of DECEPTICONS into one of the greatest mysteries ever to face the AUTOBOTS! Also, The mysterious Metrotitan arrives on CYBERTRON—smashing into the ruins of the legendary Crystal City! Meahwhile, Tensions ratchet up between AUTOBOTS and DECEPTICONS as violence breaks out in the heart of the city… and PROWL looks for someone to blame. Is DIRGE a convenient target—or the key to what comes next?
TPB • FC • $17.99 • 104 pages • ISBN 978-1-61377-626-1

I sure hope they can deliver or I may never take them seriously again.

Uber annoyed at the inclusion of the RiD annual in volume 3. I bought the annuals as I didn't think they'd make it into the trades. To buy the trades now would be a waste of money. Guess I'll have to track down issues 10 and 11.

Stormrider wrote:Is this the cover for IDW Collection Vol 8?

I don't think this is the final cover art. On amazon it has a disclaimer across the picture saying "not final art", my guess is they'll continue with the same style of covers that they've had from 1-7.
I'd like to see another Autobot. Any thoughts on who it might be? I'm putting my money on Rodimus.
Re: IDW April 2013 Transformers Solicitations (1458310)
Posted by Stormrider on January 26th, 2013 @ 5:43pm CST

Stormrider wrote:Is this the cover for IDW Collection Vol 8?

I don't think this is the final cover art. On amazon it has a disclaimer across the picture saying "not final art", my guess is they'll continue with the same style of covers that they've had from 1-7.
I'd like to see another Autobot. Any thoughts on who it might be? I'm putting my money on Rodimus.

i think that is a good guess. They seem to be alternating between Autobots and Decepticons. If they continue that pattern then Rodimus, Jazz, or Ultra Magnus might be top picks.