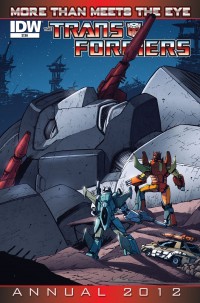 From our friends over at IDW Publishing we have their Transformers related solicitations for August 2012. Check out the covers and descriptions below, obligatory spoiler warning!

Transformers: More Than Meets The Eye Ongoing #8
James Roberts (w) • Alex Milne (a) • Milne, Nick Roche (c)
DINOBOT MONTH! Three years ago, Grimlock disappeared from his prison cell on Garrus 9. Where did he go? What happened to him? One thing’s for certain: the leader of the Dinobots is back—and he's itching to settle some scores!
FC • 32 pages • $3.99

Bullet points:
• GRIMLOCK UNLEASHED!
• The return of the Dinobots!
• Incentive cover by Marcelo Matere that connects with Robots in Disguise #8!

Transformers: More Than Meets the Eye Annual 2012
James Roberts (w) • Jimbo Salgado, Guido Guidi (a) • Tim Seeley, Alex Milne (c)
THE ORIGIN OF THE KNIGHTS OF CYBERTRON! Rodimus and the crew of the Lost Light finally reach Crystal City, home to the mysterious Circle of Light. But what they find waiting for them is going to change everything—and not necessarily for the better!
FC • 48 pages • $7.99

Transformers: Regeneration One #82
Simon Furman (w) • Andrew Wildman (a) • Wildman, Guido Guidi (c)
DINOBOT MONTH! And ex-Dinobot commander GRIMLOCK wishes it wasn’t! His quest for a means to restore his ability to change modes takes him to Nebulos—a world off-limits to TRANSFORMERS, where a welcome that’s more incendiary than warm awaits him. Plus, KUP and THE WRECKERS find themselves stranded, hunted and in a whole world of pain. Quite literally!
FC • 32 pages • $3.99

Transformers: Robots in Disguise Ongoing #8
John Barber (w) • Andrew Griffith (a) • Griffith, Casey Coller (c)
DINOBOT MONTH! Guess who's back on Cybertron? SLAG, SLUDGE, SNARL, and SWOOP—and they’re as mad as ever! IRONHIDE leads them deep into the Cybertronian wilderness searching for lost AUTOBOTS... but what they find might be the greatest danger of all!
FC • 32 pages • $3.99

Huh, I hope this Annual 2012 gets included in the eventual trades. I hate having to pick up singles that they skip out on but are still canon to the main storyline, like Infestation.
Re: IDW August 2012 Transformers Solicitations (1382066)
Posted by Sodan-1 on May 21st, 2012 @ 6:09pm CDT
Maximum Dinobots reprint???

Yes please.
Re: IDW August 2012 Transformers Solicitations (1383912)
Posted by skyshadowprimus on May 26th, 2012 @ 6:42am CDT
Action master Grimlock on Nebulos, I can feel the story surrounding the "heads" that were left on Nebulos being addressed and the return of Scorponok and Fortress Maximus.

kirbenvost wrote:Huh, I hope this Annual 2012 gets included in the eventual trades. I hate having to pick up singles that they skip out on but are still canon to the main storyline, like Infestation.

Makes me wonder if I should buy this, especially since I'm not collecting the individual MTMTE issues.