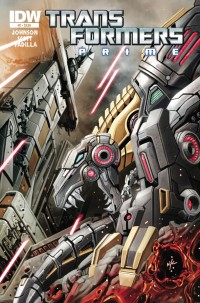 From our friends at IDW Publishing we have their Transformers comic solicitations for December 2012.

Drift gets the deluxe upgrade as the four-issue mini-series plus the Spotlight issue is collected in this hard cover oversized edition. Once a DECEPTICON, Drift now fights alongside the AUTOBOTS in the ongoing Civil War. How he came to be here, why he was once known as DEADLOCK, and how he came to be at odds with his DECEPTICON allies is revealed.

AUTOBOTS VERSUS DECEPTICONS! The crew of the Lost Light confronts a band of rogue DECEPTICONS—with terrible consequences. As an AUTOBOT slips closer to death, a single decision sets in motion a chain of events that might just spell the end for RODIMUS and his band of travelers.

Transformers: Prime—Rage of the Dinobots #2 (of 4)

CYBERTRON FALLING! As their world collapses around them, the DINOBOTS battle SHOCKWAVE’s forces to protect the fleeing Cybertronians! SWOOP’s life hangs in the balance—his teammates fight to save him, but will he succumb to evil? The answer may not be what you expect!

The animated action of Transformers is back for season 2! Picking up right where we left our heroes after the events of “One Shall Rise,” Unicron has been defeated… but OPTIMUS PRIME has lost his memory! But not to worry, MEGATRON has plans for his newest recruit… unless the AUTOBOTS can stop their nemesis and save their leader!

DARK REIGN! The fallout from the devastation on Earth ripples outwards, all the way to Nebulos, where GRIMLOCK faces his own darkest demons and a fateful choice that may cost him his very Spark. The dark reign of SCORPONOK begins here, and nothing will ever be the same again!

THE RETURN! He’s back… and CYBERTRON will never be the same. Everything BUMBLEBEE and his AUTOBOTS have built teeters at the edge of collapse—and STARSCREAM has to make the choice his whole life has been leading to.

OPTIMUS PRIME has given up his title and is now Orion Pax, and he is on the trail of the deadliest DECEPTICON of all…SHOCKWAVE. The Decepticon Justice Division gets a turn as well, hunting those who disobeyed MEGATRON. And the DINOBOTS are back, headed by Ironhide into the Cybertronian wilderness searching for lost AUTOBOTS…but what they find might be the greatest danger of all!

BEFORE OPTIMUS PRIME—there was Orion Pax! Four million years ago, the future leader of the AUTOBOTS disappeared into the Cybertronian wilderness to save a friend. What happened next would take him to the very brink—and have startling repercussions on the current comics!

And Scorponok making a return? I am intrigued, seeing from what I had read... He died.

Maybe I shall check that out.

But with the PRIME tie-in... I currently dislike the cover.

Re: IDW December 2012 Solicitations (1421437)
Posted by Sodan-1 on September 18th, 2012 @ 11:31am CDT
I'm looking forward to the Orion Pax Spotlight issue, and I'm glad to see he'll be getting a more basic body. I hope this comic suggests a how and why as to how Orion's body was turned into Optimus'. It's something that has been completely ignored by the novels, the Cybertron games and the PRIME animation, and it really bugs me.

Complete Drift seems a little unnecessary. I'd be more behind it if it wasn't a hardcover. It makes it so much more expensive when you could probably get the Drift trade and Spotlight cheaply enough.
Re: IDW December 2012 Solicitations (1421606)
Posted by Rodimus Prime on September 18th, 2012 @ 9:36pm CDT

And that Sgt. Peppers homage for MTMTE is fantastic. I need that cover for sure. Wouldnt be the first time that IDW did a month of variant covers all based on the same subject like music. Remember the photo cover month last year?
Re: IDW December 2012 Solicitations (1440785)
Posted by Rodimus Prime on November 18th, 2012 @ 7:51am CST
No alternate cover for ReGen #86?