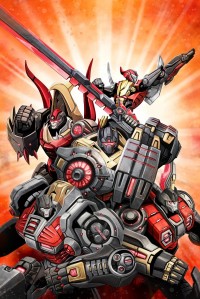 Ain't It Cool News caught up with IDW Senior Editor John Barber to discuss their upcoming Transformers Prime: Rage of the Dinobots mini-series, which is scheduled to release in November. Click here to see how the Dinobots factor into the Prime universe and the Aligned continuity.

Tying in with the video game TRANSFORMERS PRIME: FALL OF CYBERTRON, comes the IDW comic book TRANSFORMERS PRIME: RAGE OF THE DINOBOTS. Hitting shelves in November and taking place in the 'Prime' Universe, Transformers readers can get to meet everyone's favourite robotic T-Rex, Grimlock for the first time, in this incarnation of the Transformers. In RAGE OF THE DINOBOTS, the Grimlock and co are forced to battle Shockwave with the very fate of Cybertron hanging in the balance. Written by Mike Johnson (Star Trek) and Mairghread Scott, the writer of the TRANSFORMERS: PRIME animated series. Artist Agustin Padilla (Dungeons & Dragons) provides pencils while Ken Christiansen provides covers. I spoke to IDW Senior Editor John Barber about the book and the Transformers legacy on the screen and in comics.

JOHN BARBER (JB): Well, the Prime Universe is the timeline where theTransformers: Prime TV series from Hasbro Studiostakes place, along with the FALL OF CYBERTRON video games from Activision and the novels that Random House publishes, like Exiles and Exodus by Alex Irvine. So if you’re familiar with any of those, you’re already familiar with the characters. The team at Hasbro takes special care to ensure there is continuity between a wide variety of storytelling platforms for the brand.