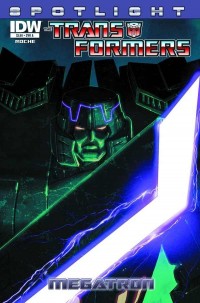 Courtesy of Bleeding Cool we have the February 2013 Transformers comic solicitations from IDW Publishing. Looks to be a good month with the three regular ongoing titles plus the conclusion of Rage of the Dinobots and Spotlight: Megatron. Check out the covers and brief description below.

TRANSFORMERS MORE THAN MEETS EYE ONGOING #14
IDEA & DESIGN WORKS LLC
(W) James Roberts (A) Alex Milne (CA) Alex Milne, Nick Roche
James Roberts (w) o Alex Milne (a) o Milne, Nick Roche (c)
THE RETURN OF OVERLORD! Locked in a secret cell underneath the Lost Light, hidden from the crew, a DECEPTICON psychopath is talking without opening his mouth… and an AUTOBOT with needles for fingers is about to make the biggest mistake of his life.

TRANSFORMERS SPOTLIGHT MEGATRON ONE SHOT
IDEA & DESIGN WORKS LLC
(W/A) Nick Roche (CA) Livio Ramondelli, Nick Roche
Nick Roche (w & a) o Roche, Livio Ramondelli (c)
MEGATRON IS BACK! Writer/artist Nick Roche (Last Stand of the Wreckers) takes us back to the last time MEGATRON returned-when he found his DECEPTICON forces in tatters under the control of STARSCREAM. In this never-before-revealed tale, we learn exactly how Megatron reacted… and how Starscream survived!

TRANSFORMERS REGENERATION ONE #88
IDEA & DESIGN WORKS LLC
(W) Simon Furman (A) Andrew Wildman (CA) Andrew Wildman, Guido Guidi
Simon Furman (w) o Andrew Wildman (a) o Wildman, Guido Guidi (c)
WAR IN THE CITY! Anarchy reigns on the streets of Iacon as SCORPONOK’s grip tightens further, and those AUTOBOTS still willing and able to resist look to their absent leader-who is on an endangered list all of his own. Beneath the surface of CYBERTRON, HOT ROD runs for his life, locked on a collision
course with his maker, PRIMUS!