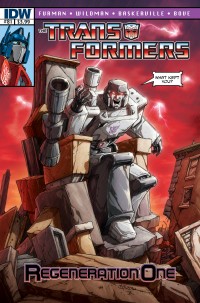 Courtesy of our friends at IDW Publishing we have their solicitations for July 2012. In addition to the normal Transformers titles, we've also thrown in their Battle Beast and G.I.Joe offerings. Check out the covers and descriptions below! Looks like July is going to be a big month for Transformers comics!

Transformers: More Than Meets The Eye Ongoing #7
James Roberts (w) • Alex Milne (a) • Milne, Nick Roche (c)
DECEPTICON MONTH! The war's over — but no-one told the DECEPTICON Justice Division! Meet the five deadliest DECEPTICONS in the galaxy. Their sole purpose: to hunt down and kill anyone who has ever disobeyed MEGATRON. Who's their next target?
FC • 32 pages • $3.99

Bullet points:
• The massive success of the TRANSFORMERS relaunch continues!
• Nobody’s safe and nothing is sacred!
• DECEPTICON MONTH!

Transformers: Robots in Disguise Ongoing #7
John Barber (w) • Brendan Cahill (a) • Andrew Griffith, Casey Coller (c)
DECEPTICON MONTH! Fan-favorite character TURMOIL returns from the dead—but what does he want on CYBERTRON? The AUTOBOTS don't want another DECEPTICON on their planet and the DECEPTICONS don't want things to get any worse... but what Wheeljack discovers about the DECEPTICON warlord will change everything!
FC • 32 pages • $3.99

Transformers: Regeneration One #81
Simon Furman (w) • Andrew Wildman & Stephen Baskerville (a) • Wildman, Guido Guidi (c)
The TRANSFORMERS comic that began it all—is back. With a vengeance! 21 years have passed since CYBERTRON was restored to its former glory, and finally there is peace. But, after millions of years of bitter civil war, can all ever truly be one? In a conflict this primal, this epic and far-reaching... There are always “Loose Ends”!
FC • 32 pages • $3.99

Transformers: Regeneration One 100-Page Spectacular
Simon Furman (w) • Andrew Wildman & Stephen Baskerville (a) • Wildman (c)
GET READY FOR REGENERATION ONE! For the first time in nearly a decade the final issues of the original run of TRANSFORMERS are back—just in time for the story to continue in TRANSFORMERS: REGENERATION ONE #81! Following a planet-shattering battle with UNICRON, OPTIMUS PRIME has fallen! How will the other AUTOBOTScarry on—and will PRIME be back in time for CYBERTRON's darkest hour? Reprinting THE TRANSFORMERS #76-80!
FC • 100 pages • $7.99

Bullet points:
• The last issues of the original TRANSFORMERS comic series—by the same writer, penciler, and inker as REGENERATION ONE #81!
• Fan favorite characters meet their final fates!
• Includes the legendary "END OF THE ROAD"!

Transformers: Robots in Disguise, Vol. 1
John Barber (w) • Andrew Griffith (a & c)
The war for Cybertron is over—now the hard part begins! BUMBLEBEE and his fellow AUTOBOTS struggle to maintain control of a world without OPTIMUS PRIME! Bumblebee's provisional government is struggling and Prowl defends it against the DECEPTICONS but how far will he go—and who will chose to stand by his side?
TPB • FC • $19.99 • 124 pages • ISBN 978-1-61377-291-1

Bullet points:
• The smash-hit digital comic, collected in print for the first time!

Infestation 2, Vol. 2
Mike Raicht & Chuck Dixon (w) • Valentine DeLandro & Guido Guidi (a) • Livio Ramendelli (c)
The Lovecraftian monsters invade the worlds of TRANSFORMERS and G.I. JOE in INFESTATION 2. It's a steam-punk world in the grips of panic as terrifying beings from the depths of the ocean corrupt both humans and DECEPTICONS! Meanwhile, COBRA has always had a penchant for dark experiments. This time they've gone too far and opened a portal to a realm of violence and madness. As squadron after squadron of Cobra Vipers falls under the thrall of the Elder Gods there seems no way to stop the hideous transformations that are taking place. Can SNAKE EYES stop it?
TPB • FC • $17.99 • 104 pages • ISBN 978-1-61377-280-5

Battle Beasts #1 (of 4)
Bobby Curnow (w) • Valerio Schiti (a) • Dan Brereton (c)
It's just another average day for Bliss, an ignored linguist at the Department of Defense. However, when Bliss unlocks the secret translation of an ancient scroll, terror rains from the sky... in the form of the BATTLE BEASTS! Unstoppable creatures armed to the teeth, the Battle Beasts are determined to make Earth their own personal war zone. Nothing can stop their merciless carnage. Nothing except perhaps a gentle word from the one woman who can understand them—Bliss!
FC • 32 pages • $3.99

Bullet Points:
• The beloved toys from the ‘80s come to life in a story with non-stop action!
• If you love Transformers or Teenage Mutant Ninja Turtles, you'll love this tale of intergalactic creature mayhem!
• Wraparound Ulises Farinas cover!

Cobra #15
Mike Costa (w) • Antonio Fuso (a) • Antonio Fuso (c)
The lies and betrayals keep adding up, as Flint struggles to maintain his honor amidst his team of scoundrels and backstabbers. And is the information that Tomax has been supplying really on the level? Of course not... but what game is he playing?
FC • 32 pages • $3.99

Bullet points:
• All 155 issues of A REAL AMERICAN HERO are now collected for the first time.

G.I. JOE #15
Chuck Dixon (w) • Will Rosado (a) • Tommy Lee Edwards (c)
“Deep Terror, part 3!”
DEEP TERROR rumbles on! Scarlett and Team Bravo are on the loose in a COBRA mining operation, miles beneath the surface of the Earth, with no chance of escape. In this issue they uncover the objective of Dr. Mindbender's subterranean search: a rare element that will allow COBRA to change the world forever. And that's NOT Good!
FC • 32 pages • $3.99

Snake Eyes & Storm Shadow #15
Chuck Dixon (w) • Robert Atkins (a) • Andrea Di Vito (c)
“Serpent’s Shadow,” part 3!
SNAKE EYES continues a deadly game where the rules are known only to him. To prove his renewed loyalty to the Arashikage Clan, he joins a team to kill the new COBRA COMMANDER! But danger lurks for him within the ninja clan with a new betrayal around every corner. ALSO! Zartan makes some interesting new friends.
FC • 32 pages • $3.99

I assure you, this is no Coincidence.

Joetx wrote:Does anyone know how many issues of RID Ongoing are in Volume 1?

Likewise, how many issues of MTMTE Ongoing are in MTMTE's Volume 1?

I'm not sure what is going to be in RiD volume one, probably issues 1-6. As for MTMTE, issues 1-6 also including the one shot "The Death of Optimus Prime".
Re: IDW July 2012 Solicitations: Transformers, Battle Beasts, G.I.Joe, and More! (1401711)
Posted by Va'al on July 17th, 2012 @ 4:49pm CDT
Ok, I've made sure I get the Marcelo Matere interlocking variant for RID and MTMTE, but I also REALLY want that Decepticon face.

Might have to ask my comic shop to keep both for me.