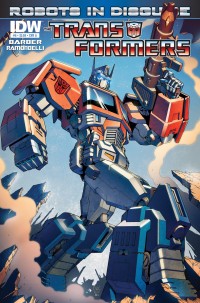 Our friends at IDW Publishing have supplied us with their Transformers solicitations for June 2012. Check out the covers and descriptions below!


Transformers: More Than Meets The Eye Ongoing #6
James Roberts (w) • Nick Roche (a) • Alex Milne, Nick Roche (c)
MADNESS IN SPACE! A rescued Autobot loses his grip and it’s up to Hot Rod’s questing team to stop him—before the damage becomes irreparable! This is surely one of the most intense Transformers tales ever committed to paper!
FC • 32 pages • $3.99

Bullet points:
• The massive success of the TRANSFORMERS relaunch continues!
• Nobody’s safe and nothing is sacred!

Transformers: More than Meets the Eye Vol. 1
James Roberts (w) • Nick Roche & Alex Milne (a) Alex Milne (c)
The ultimate Transformers saga begins here! More Than Meets The Eye reunites the fan-favorite creative team behind Last Stand of the Wreckers and sends the Transformers on an epic quest to the farthest reaches of the Transformers Universe and beyond! Also includes the one-shot Death of Optimus Prime.
TPB • FC • $19.99 • 128 pages • ISBN 978-1-61377-235-5

Transformers: Robots in Disguise Ongoing #6
John Barber (w) • Livio Ramondelli (a) • Ramondelli, Casey Coller (c)
ONCE HE WAS: OPTIMUS PRIME! The Autobot gave up his title—returned to his role as ORION PAX! But that doesn’t mean the fight’s over! A shattered planet leads Pax and a squad of fan favorite characters on the trail of the deadliest Decepticon of all… SHOCKWAVE!
FC • 32 pages • $3.99

Bullet points:
• OPTIMUS PRIME IS BACK, AND HE’S READY FOR ACTION!

Re: IDW June 2012 Transformers Solicitations (1360017)
Posted by Spaceship Bruce on March 19th, 2012 @ 10:02am CDT
Just stopping by to say that it's rad that IDW is putting the focus on different characters. Never thought there'd be an ongoing TF comic where the primary cast includes Rewind, Brainstorm, Cyclonus, Whirl, Swerve, & Skids. TF is rich with secondary characters, most of which have great character designs & a little bit of personality, & it's about time that they get their due.
Re: IDW June 2012 Transformers Solicitations (1360239)
Posted by quickmixed on March 20th, 2012 @ 1:36am CDT
I like Roche's art but Im annoyed that Milne isnt drawing issue 6. I have really enjoyed his character designs the past couple of issues. The last ongoing series suffered from a lot of problems, one being that even though IDW's TF artists are fantastic, they just couldnt keep continuity in the bots designs.

I hope this doesnt happen with MTMTE and RID because they are both really well written and drawn books.