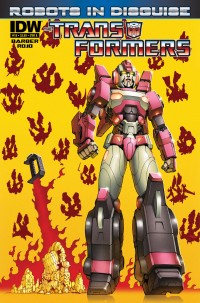 The month of June brings with it a handful of exciting Transformers comics! We have Transformers: More Than Meets The Eye, Robots In Disguise, Regeneration One and Prime: Beast Hunters all continuing, while Monstrosity is being released in paper form. There's also collections for the Movie comics and an interesting 30th Anniversary Collection. Check it out below! Transformers 30th Anniversary Collection
Jim Sorenson, Bob Budiansky, Simon Furman, Mike Costa, James Roberts & More (w) • Andrew Wildman, Geoff Senior, Pat Lee, Don Figueroa, EJ Su, Alex Milne, Nick Roche, & More (a) • Alex Milne (c)
It's a celebration 30 years in the making! Relive the landmark comics that helped define the legacy of TRANSFORMERS and read along with the creators that made these great comics as Jim Sorenson provides insight from a range of writers and artists that breathed life into the denizens of CYBERTRON. From Marvel to Dreamwave to IDW and other iterations in-between, this book is a must have for TF collectors!
HC • FC • $49.99 • 320 pages • 7" x 11" • ISBN 978-1-61377-662-9
Expected in-store date: 6/19/13
• Celebrating 30 Years of TRANSFORMERS comics! Transformers: Robots in Disguise #18
John Barber (w) • Atilio Rojo (a) • Rojo, Casey Coller (c)
SURVIVOR'S GUILT! After the shattering events of the past two issues, we can't tell you who's alive and who's dead. But we will hint that one CYBERTRONIAN has to reconsider her worldview—while she comes face-to-face with some old enemies. We won't mention any names, but she's in for the fight of her life!
*2 regular covers will be shipped in a 1-to-1 ratio
FC • 32 pages • $3.99
Expected in-store date: 6/5/13
Variant Covers: Phil Jimenez variant cover!
T-Minus 4 months to the event that will rock the TRANSFORMERS to their core!
Superstar artist Phil Jimenez contributes a powerful variant cover! Transformers: More Than Meets the Eye #18
James Roberts (w) • Alex Milne (a) • Milne, Sean Chen (c)
"DON'T LET THEM TAKE SKIDS!" The crew of the Lost Light left CYBERTRON before they could hear those words—part of a message from the future warning of terror and catastrophe and a threat to the entire Cybertronian race. Can the AUTOBOTS do anything to stop the beginning of the end?
*2 regular covers will be shipped in a 1-to-1 ratio
FC • 32 pages • $3.99
Expected in-store date: 6/26/13
Variant Covers: Nick Roche variant cover!
This is the big one—everything since MTMTE #1 has been leading to this story!
Heroes will fall—and revelations will change your perceptions of everything, ever! Transformers: Monstrosity #1 (of 4)—SPOTLIGHT
Chris Metzen & Flint Dille (w) • Livio Ramondelli (a) • Ramondelli x 3 (c)
MEGATRON'S DESCENT! In the early days of the war on CYBERTRON, OPTIMUS PRIME puts everything on the line to unify the planet—but not everyone agrees that this new Prime should be in charge! Meanwhile, the fallen DECEPTION leader, MEGATRON, begins a journey that will change everything. Plus—what is the terrible secret of the DINOBOTS?
*3 regular covers will be shipped in a 1-to-1-to-1 ratio
FC • 32 pages • $3.99
Expected in-store date: 6/5/13
Exploding from the screen to your comic shop!
The sequel to the amazing AUTOCRACY!
Written by Chris Metzen (one of the main creative minds behind Blizzard Entertainment's Warcraft®, StarCraft®, and Diablo® universes) and Flint Dille (writer on the original TRANSFORMERS cartoon)! Transformers Prime: Beast Hunters #2
Mairghread Scott & Mike Johnson (w) • Agustin Padilla (a) • Ken Christiansen (c)
THE WORLD BELOW! Deep beneath the surface of CYBERTRON, the last vestiges of life struggles to survive. Their only protectors: GRIMLOCK and his loyal DINOBOTS—who find themselves at the center of a dark mystery!
FC • 32 pages • $3.99
Expected in-store date: 6/19/13
Variant Covers: Animation art variant cover!
Ties in to the smash hit TRANSFORMERS PRIME: BEAST HUNTERS television show as seen on the HUB!
The creative team from the critically-acclaimed TRANSFORMERS PRIME: RAGE OF THE DINOBOTS is back! Transformers Regeneration One #92
Simon Furman (w) • Andrew Wildman (a) • Wildman, Guido Guidi (c)
CRISIS ON CYBERTRON! A whole society, wounded and reeling after SCORPONOK's genetic manipulations, teeters on the edge of anarchy and uprising, a situation SOUNDWAVE is only too happy to exploit! When the newly recovered BLASTER uncovers the truth, he finds himself on the endangered species list—courtesy of the all-new, all-deadly MAYHEM ATTACK SQUAD.
*2 regular covers will be shipped in a 1-to-1 ratio
FC • 32 pages • $3.99
Expected in-store date: 6/19/13
Variant Covers: Geoff Senior variant cover!
CYBERTRON: The last line of defense!
Continuing the story of the original 1980s TRANSFORMERS comic book series!
Non-stop action in the Furman/Wildman manner! Rodimus Prime wrote:I haven't read RID or MTMTE, but I've been contemplating picking up the TPBs. Is Arcee a psychotic badass in RID? That's the vibe I'm getting...

Rodimus Prime wrote:I haven't read RID or MTMTE, but I've been contemplating picking up the TPBs. Is Arcee a psychotic badass in RID? That's the vibe I'm getting...

She's less of a psycho in this series than in her spotlight, but she is badass. She has an interesting relationship with Prowl. If you're a fan of Furman's "-ations", I think you'll like it.

I definitely recommend picking up the TPBs.

Two people who would only read ReGen One picked up RID, and was hooked.
Then they discovered MTMTE, and now almost have second thoughts about RG1!
(That's not to say it will happen to you, or that they put other series to shame, just that it's really REALLY good writing, and very different from Furman's style.)

Your issue tends to be the artwork though, right?


As for Arcee, I share Nemesis Maximo's feelings: she's definitely a hard-hitting, chaotic neutral character, with development yet to come as June suggests, and I think she might turn out more important to the story than we currently see her.
Re: IDW June 2013 Transformers Solicitations (1472376)
Posted by Rodimus Prime on March 17th, 2013 @ 12:19pm CDT
I'm coming around to the art style. I still prefer ReGen's art by leaps and bounds, but the story is kinda not living up to it. Maybe my expectations were just too high. I have heard a lot of good things, especially about Rodimus in RID. I tried reading MTMTE when it 1st started, but Fort Max is 1 of my favorite characters from G1 and when they showed that he was weak and had Overlord torture him, I put the issue down. Kinda turned me off to it.

Hopefully ReGen will pick up, but I'm not expecting epicness anymore. Furman has clearly lost a couple of steps from the original series.

I am looking forward to the new series with the Dinobots, though. I liked Rage of the Dinobots.
Re: IDW June 2013 Transformers Solicitations (1472383)
Posted by Va'al on March 17th, 2013 @ 12:57pm CDT
Rodimus, for now, only really shows up in MTMTE, which is also where Fort Max shows up again after Last Stand of the Wreckers.

I'm not sure what you mean about showing weakness, as he was left pretty much alone on a planet overrun by Decepticons, and eventually fell to them. And that was at the hands of a Phase Sixer - Overlord. I really don't think that undermines him at all!
He is, however, definitely smaller than his G1 self.

For a fan of the old artwork, I sincerely recommend the two Annuals, as Guido Guidi does an amazing job of giving some background exploration of Cybertronian lore and mythos - in retro comics style, colour and all!