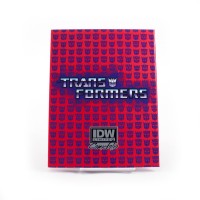 After yesterday's news about the comicfolios, IDW Limited has confirmed the contents of the sets, as well as open up the pre-orders for these exclusive collector's editions.

The issues receiving the treatment are:

The issues can be ordered separately or as a set, except for Beast Hunters, only available (for free) when bought as part of the set. Check out the latter's video review, and some images from the issues below!