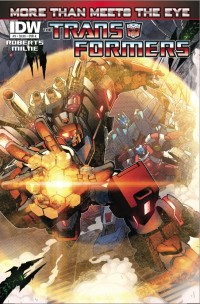 IDW Publishing has posted their solicitations for March 2012. The Transformers titles are listed below.


Check out the covers and descriptions below.

How to Draw Transformers
Nick Roche (w & a) Marcelo Matere (c)
The complete guide to drawing Transformers! Everyone knows that Transformers are fun to watch and play, but did you know that they are also fun to draw? Now you can become a first-rate Transformers artist, just by following these step-by-step instructions!
TPB FC $4.99 32 pages 8" x 10" ISBN 978-1-61377-149-5

Bullet points:
Wanna learn how to draw your favorite 'bots? No you can!

Transformers: More Than Meets The Eye Ongoing #3
James Roberts (w) Alex Milne (a) Milne, Nick Roche (c)
DISASTER IN SPACE! What's the very worst thing you could find on board a four million year old spaceship? Clue: it's ancient, it's deadly, and it shouldn't exist-but it's killing the Transformers anyway! It's AUTOBOTS versus boogieman in a Transformers story unlike any you've seen before, as the exciting new direction rolls out!
FC 32 pages $3.99

Bullet points:
Two series, ONE UNIVERSE! This series, in conjunction with TRANSFORMERS: Robots in Disguise, expands the TRANSFORMERS universe into exciting, unexplored territory.

Transformers: Robots in Disguise Ongoing #3
John Barber (w) Andrew Griffith (a) Casey Coller, Griffith (c)
CYBERTRON IN CRISIS! An explosion in the middle of the capitol city strikes. Was it a DECEPTICON attack? Suspicions run high, and the uneasy peace unravels! Only Wheeljack can solve the puzzle-but will he do it before Starscream takes advantage of the AUTOBOTS weakness! The bold new direction in Transformers storytelling continues!
FC 32 pages $3.99

Bullet points:
Two series, ONE UNIVERSE! This series, in conjunction with TRANSFORMERS: Robots in Disguise, expands the TRANSFORMERS universe into exciting, unexplored territory.

Transformers, Vol. 7: Chaos
Mike Costa & James Roberts (w) Livio Ramondelli (a & c)
CHAOS IS HERE! The long-awaited event that will have TRANSFORMERS fans talking for years and have lasting repercussions on the lives of our heroes and villains! The Autobots land on Cybertron to discover Galvatron's plan is already in effect-but what is it he seeks in the heart of Cybertron? What could he possibly want on a dead planet? Optimus Prime must face off against Galvatron, in a battle where the fate of the whole planet rests on the outcome!
TPB FC $19.99 124 pages ISBN 978-1-61377-140-2

Bullet points:
"All in all, this book is a solid, fun, action heavy, good time. I can't recommend it highly enough. Even if you're not a TRANSFORMERS fan, you're still going to walk away happy" -GeeksofDoom.com