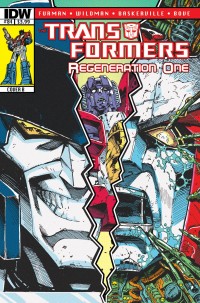 Our friends at IDW Publishing have sent over their Transformers solicitations for October 2012. Check out the covers and descriptions below.

Bullet points:
• THE MOST MINDBENDING ISSUE OF TRANSFORMERS EVER!
• YOU WON’T BELIEVE WHOSE HEAD GETS RIPPED OFF THIS TIME!

Transformers: More Than Meets The Eye #10
James Roberts (w) • Alex Milne (a) • Milne, Nick Roche (c)
SHADOWPLAY continues! On pre-war CYBERTRON, Prowl and Chromedome realize they've got a serial killer on their hands, and Orion Pax receives a summons from an old friend that will change his life forever!
FC • 32 pages • $3.99

Transformers: Regeneration One #84
Simon Furman (w) • Andrew Wildman (a) • Wildman, Guido Guidi (c)
LAST STAND! Things go from bad to worse on as MEGATRON tightens his remorseless grip on planet Earth. Can the Wreckers save Kup? Can they reach the Ark in time? The odds have never been more stacked against them. But you know what they say: “when all hope is gone...” And what exactly is up with Starscream?
FC • 32 pages • $3.99

Bullet points:
• THE PULSE-POUNDING CONTINUATION OF THE ORIGINAL TRANSFORMERS SERIES CONTINUES!
• SIZZLING ACTION AS ONLY FURMAN AND WILDMAN KNOW HOW TO DELIVER!

Is there any way of finding out what the variants look like?
The IDW site is rubbish for this kind of thing, it's still on the Costa ongoing.
Re: IDW October 2012 Transformers Solicitations (1401661)
Posted by WiEGoP on July 17th, 2012 @ 1:46pm CDT
Would be nice to see the Variants, but I am loving the covers for MTMTE.

Of course there's nothing I don't love about those comics.

I really wish they would stop having Livio doing the interiors of comics. His art can be very pretty and cool, but it doesn't work for comics because the different colors/lighting ruin the flow from panel to panel. And it's really hard to tell which character is doing what to which character.

Having Hardhead, possibly the most generic Autobot on the planet, in the RiD issue 5 really didn't help.

But it's okay. As long as I have the heavenly crack cocaine that is MTMTE, I will be content.
Re: IDW October 2012 Transformers Solicitations (1401769)
Posted by Rodimus Prime on July 17th, 2012 @ 9:14pm CDT
The only one I care about is Regeneration. Hot Rod looks like a little kid on that cover. Maybe that's the point? And the other cover? Ratchet and Megatron yet again? Badass.