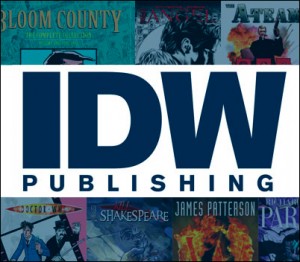 Fresh news from IDW Publishing, as two new editorial positions have been announced, with Sarah Gaydos and Denton Tipton receiving promotions in their editor roles! For a Transformers-related part, though, we also know that John 'Continuity' Barber is leaving his current role, and remain as a writer on the titles he has already been confirmed for, plus a third yet to be revealed book, post-Revolution. Check out the press release below!

Sarah has been promoted from Editor to the position of Group Editor. Sarah began her position at IDW in 2013 after six years of editing at DC/WildStorm. She has overseen the Star Trek and Disney lines to great success among other high profile titles including Cartoon Network’s Powerpuff Girls plus critically acclaimed creator-driven titles such as Satellite Falling. In her new role, she will take on various Hasbro licenses including Jem and the Holograms. She loves cats and burritos.

Denton has been promoted from Editor to the position of Senior Editor. A former journalist at the San Diego Union-Tribune as well as comics retailer, Denton joined IDW in 2008 and edits such series as X-Files, Dirk Gently, Fear and Loathing in Las Vegas, Judge Dredd, Orphan Black, the upcoming Jim Thompson’s The Killer Inside Me, and more exciting projects yet to be announced. He loves dogs and Night Court reruns.

As part of these editorial shifts, IDW Publishing bids a fond farewell to Group Editor John Barber who previously edited Transformers: More Than Meets the Eye, Micronauts, and Jem and the Holograms. In addition, John has contributed as a writer to such titles as Transformers, Back to the Future, and the upcoming event series, Revolution. John will remain creatively involved with IDW, writing a secret project yet-to-be-unveiled that spins out Revolution.

“As much as we’re all sad to see John Barber leave his key editorial spot at IDW, the change does also provide the opportunity to advance Sarah and Denton in well-earned ways,” said IDW’s Chief Creative Officer Chris Ryall. “And it also means we’ll be seeing additional writing projects from John as well, which is another bit of good news for IDW. John is a key part of Revolution and the events that spin out of it, and he’ll continue to help steer this new direction on a couple titles we’re excited to be announcing at SDCC a little later this month.”