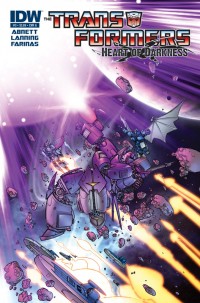 Special, is the month of May. Full of all the Transformers: Dark Of The Moon prequel comics - Foundation and Rising Storm, as well as the new Movie Adaptation. Transformers: Ongoing continues with it's 19th issue, and the four-part continuity builder, Heart of Darkness is on it's third issue. Paperbacks include the collections of Foundation, Rising Storm and IDW Collection #4. Courtesy of Newsarama, check out the previews and spoilers below!

TRANSFORMERS: Heart of Darkness #3 (of 4)

Dan Abnett & Andy Lanning(w) • Ulises Farinas (a) • Farinas, Casey Coller (c)
“CHAOS” PRELUDE! We learn new truths about the TRANSFORMERS’ ancient history—truths that may lead to their ruin. GAVATRON and company gather arms and recruit major forces. With a raving lunatic leading the DECEPTICON forces—absolute destruction is sure to follow. HoD leads directly into “CHAOS”—the first-ever TRANSFORMERS event book from IDW!
FC • 32 pages • $3.99
*2 regular covers will be shipped in a 1-to-1 ratio.
Bullet Points:
• The Road to “CHAOS” starts here!
• Introducing a brand new TRANSFORMERS villain!

Mike Costa (w) • Guido Guidi (a) • Marcelo Matere, Guido Guidi (c)
“CHAOS” PRELUDE! The situation on Earth continues to deteriorate while we shift focus to outer space where RODIMUS was last seen dead! A classic character returns as the things heat up and we begin our descent into “CHAOS”—THE YEAR’S BIGGEST TRANSFORMERS EVENT! Don’t miss “SPACE OPERA, Part 1!”
FC • 32 pages • $3.99
*2 regular covers will be shipped in a 1-to-1 ratio.
Bullet Points:
• Part 1 of “Space Opera,” the lead-in to CHAOS!
• Fan-favorite Guido Guidi returns!

John Barber (w) • Andrew Griffith (a) • Brian Rood (c)
On war-ravaged Cybertron, OPTIMUS PRIME finally finds himself face-to-face with MEGATRON... but if Prime carries through his plan, will he have crossed the line? Secrets are revealed as we make our last stop on the road to TRANSFORMERS: DARK OF THE MOON!
FC • 32 pages • $3.99
Bullet Points:
• Official TRANSFORMERS: DARK OF THE MOON prequel!
• Secrets Revealed!

John Barber (w) • Carlos Magno (a) • Brian Rood (c)
Just as OPTIMUS PRIME stands ready to score a decisive victory against STARSCREAM's army of Decepticons, MEGATRON's plan becomes clear—and the Autobots are right where he wants them! This essential lead-in to TRANSFORMERS: DARK OF THE MOON comes to a head, as new characters are introduced... and familiar faces meet their final fate!
FC • 32 pages • $3.99
Bullet Points:
• Official TRANSFORMERS: DARK OF THE MOON prequel!
• Leads directly into the opening of the new movie!


TRANSFORMERS 3: Movie Adaptation
John Barber (w) • Jorge Jimenez Moreno (a & c)
TRANSFORMERS 3 is geared up to be the biggest blockbuster of the decade, and this beautifully illustrated adaptation of the story is the best place to live and re-live the adventure over and over! Join your favorite heroes: OPTIMUS PRIME and BUMBLEBEE as they face off against the most wretched villains: MEGATRON and STARSCREAM and thrill at the new adventure that will have people talking for years to come!
TPB • FC • $17.99 • 104 Pages • ISBN: 978-1-60010-917-1


TRANSFORMERS: Foundation
John Barber (w) • Andrew Griffith (a & c)
Did you ever wonder how the rivalry between OPTIMUS PRIME and MEGATRON began? What set these two friends off on such a climactic collision course? TRANSFORMERS: Foundation is the answer. Unlock the most hidden secrets of Cybertron and witness the dawn of the most bitter rivalry in the galaxy!
TPB • FC • $17.99 • 104 Pages • ISBN: 978-1-60010-918-8

Bullet Points:
• Official TRANSFORMERS: DARK OF THE MOON prequels and adaptation give you the complete story around the new movie!

Seriously, at what point does IDW officially give up the license?
Re: IDW Publishing - May 2011 Transformers Comic Solicitations (1184433)
Posted by Vicalliose on February 19th, 2011 @ 10:29pm CST
I love all this hate for the comics. It makes me makes me feel like a proper outsider when NO ONE likes what I'm reading.

I kid... Infestation is actually a best seller around here and the Transformers part of it has already gone out of print!

Apparently a large group of the comic readers don't even post here.

Vicalliose wrote:Infestation is actually a best seller around here and the Transformers part of it has already gone out of print!

So? Just because something makes a lot of money and sells out doesn't mean it's quality. It means there's a lot of suckers out there wasting their money.
Re: IDW Publishing - May 2011 Transformers Comic Solicitations (1184716)
Posted by Vicalliose on February 20th, 2011 @ 3:41pm CST

Vicalliose wrote:Infestation is actually a best seller around here and the Transformers part of it has already gone out of print!

So? Just because something makes a lot of money and sells out doesn't mean it's quality. It means there's a lot of suckers out there wasting their money.

Yeah well I guess I'm one of those rare people who actually enjoys this and otherwise hates Ongoing altogether.