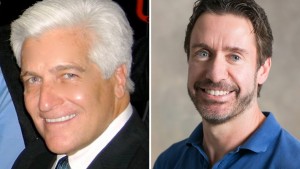 We have another piece of news from the fine folks over at IDW Publishing, with another role shuffle among its higher echelons, after Chris Ryall stepping away and John Barber becoming Editor in Chief - specifically, CEO Ted Adams is moving from the position of Media Holdings onto a brief sabbatical, and the position will be transferred to ex Paramount and Universal TV's Kerry McCluggage.

You can read the full press release below, and let us know what you think of this shift, and whether you believe it'll affect anything at IDW for the time being!

STAMFORD, CT and SAN DIEGO, CA (July 25, 2018); Veteran television executive Kerry McCluggage, who was welcomed to the IDW Media Holdings, Inc. (OTCQX: IDWM) Board of Directors in September 2017, has been named as the company’s new Chief Executive Officer. The former Paramount TV Chairman and Universal TV President will replace current CEO and founder Ted Adams, who is taking a brief sabbatical and will return to IDW in a new creative role.

In making the announcement, IDW Media Holdings’ Chairman Howard Jonas, stated, “As Chairman of Paramount TV, Kerry grew that operation from $700 million to $3.2 billion in just over a decade, making it one of the world’s leading television production companies. His leadership abilities and keen understanding of the entertainment industry have also enabled him to achieve success with his own film and television production company Craftsman Films. Similarly, his contributions as a member of the IDW Board of Directors have provided him with beneficial insights necessary to continue IDW’s story of success as the company seeks to expand upon its business model.”

“IDW has demonstrated impressive achievements in each of its core divisions. It’s media unit, encompassing publishing and games as well as reimagining the entertainment production model, has achieved tremendous success and is poised for phenomenal growth. There is also a great team of passionate, talented professionals that I am eager to lead and learn from as we continue to build upon the incredible foundation created by Ted Adams and others over the past 20 years,” said McCluggage.

“I’m excited to see where Kerry takes the company I’ve been building for the last 20 years,” added Adams. “I’m looking forward to taking a brief sabbatical and returning to IDW in a new role, and have complete confidence that the company will continue to build upon its current trajectory in the very capable hands of Kerry McCluggage. I leave him with very dedicated and smart teams across all three of our divisions. I’m proud of the work we’ve been able to do together.”

As both an industry executive and independent producer for over 40 years, McCluggage has also been an investor in media companies, including Allumination FilmWorks LLC. and Content Media Corporation. Since 2002, he has served as President of Craftsman Films, an independent production company developing motion picture and television product. Additionally, McCluggage is a founding shareholder of Old West Investment Management.

Prior to forming Craftsman Films, McCluggage was Chairman of the Paramount Television Group, a position he held for 10 years with responsibility for all aspects of the company's television operations. During his time with Paramount, McCluggage shepherded many award winning and successful series, including the Emmy Award-winning “Frasier" and "Cheers," and the phenomenally successful STAR TREK franchise, as well as the venerable magazine series "Entertainment Tonight" and helped develop and launch the original plan for UPN (known as The United Paramount Network).

Before joining Paramount, McCluggage was with Universal, where he established the company as a significant supplier of series with such groundbreaking shows as "Quantum Leap," "Law & Order," "Northern Exposure," “Miami Vice” and "Coach." he joined as a programing assistant in 1978 and would have oversight of all development and production for such series as "Magnum, P.I.," "The Equalizer," "Murder She Wrote," "The A-Team," and ultimately rising to President of Universal Television.