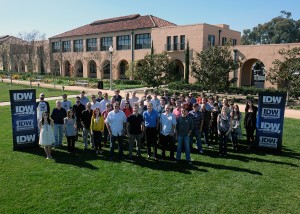 While not strictly Transformers related, this is big news for IDW Publishing, the company that has ensured the survival of transforming robot fiction since 2005, and currently breathing life back into gestalt technology with Combiner Wars! Read on the press release below to find out about the relocation of the IDW headquarters and the opening of the San Diego Comic Art Gallery - soon to showcase some Transformers art too?

San Diego, CA (February 12, 2015) – IDW Publishing is pleased to announce the relocation of their headquarters due to business expansion, in June 2015, as well as the opening of a groundbreaking new comic art gallery. The new offices and gallery will be located in former Navy barracks within the historic NTC in Liberty Station, which is nestled in the Point Loma community of San Diego.

The San Diego Comic Art Gallery will be a unique, new and dynamic space located within the IDW offices, designed to educate and engage the local San Diego community and the region of Southern California with the sequential comic book and graphic arts. The SDCAG will create a permanent home in San Diego as a showcase for this celebrated art form; already so pervasive in pop culture, thanks to the meteoric success of comic-based films, television and entertainment, and already so associated with the San Diego area, thanks to Comic-Con International. With a retail space, a gallery of original art from comics and animation, and actual working artists on the premises, the SDCAG is an entirely new kind of venture. Harry L. Katz, former Head Curator in the Prints and Photographs Division at the Library of Congress, has been named the curator of SDCAG.

Through events, author and artist appearances, art installations and celebrations, the SDCAG will become a destination to worldwide fans of the medium, and cement San Diego’s status as a Capital of the comic arts, while becoming an integral part of the immediate community. The first installation will be an extensive showcase of the work of Kevin Eastman, co-creator of the Teenage Mutant Ninja Turtles, and local San Diego resident.

“We’ve been looking to make a move for a while,” said Ted Adams, CEO & Publisher of IDW, “We’ve been expanding rapidly, and simply have run out of room. At the same time, we’ve been looking for a space that more accurately reflects who we are as a company. When we started talking with the NTC, it became evident immediately that this would be a perfect fit. And with the gallery, we’re going to be able to show the community, and the world, just who IDW is. This move is the perfect next step in the evolution of our company.”

“The NTC Foundation welcomes IDW Publishing and their creative team to the NTC Arts & Culture District at Liberty Station,” said NTC Foundation Executive Director Alan Ziter. “Their new San Diego Comic Art Gallery will be a great addition to the numerous art galleries and museums already at NTC and we look forward to the creative collaborations ahead. We anticipate it will be a San Diego landmark destination for comic and animation art lovers from all over the world.”

Moving into a historic building has its unique challenges and is being made possible with the assistance of San Diego local area businesses such as Good & Roberts LLC and obrARCHITECTURE inc. Taking 18,344 square feet, IDW will now be the largest tenant in the already vibrant arts district.

After 15 years as a prominent part of the local business community, IDW Publishing is sure to be a more public presence with the move to NTC. The Grand Opening is scheduled for June 1, 2015. For more information on this event, please contact IDW PR & Marketing Manager, Rosalind Morehead.

About NTC at Liberty Station
NTC at Liberty Station is San Diego’s largest Arts & Cultural District located in historic buildings at the former Naval Training Center in the new Liberty Station neighborhood. With 28 park-like acres and 16 of its 26 buildings complete, NTC is home to nearly 80 museums and galleries, artist studios, dance companies, educational groups, multidisciplinary arts, creative retail and other organizations that showcase San Diego’s creative community and provide innovative experiences for the public. NTC is under the stewardship of the not-for-profit NTC Foundation.

About Good & Roberts, LLC
Founded in San Diego, California in 1979 by Jack Good and Stan Roberts, Good & Roberts (G&R) has always valued relationships and the guiding principle of treating others with respect and integrity. This philosophy was consistently reinforced during the early years of the company when the founders handed out “Golden Rule Marbles” to employees, customers and subcontractors as recognition for demonstrating that principle. As the company grew this philosophy formed the basis of our core values and company culture.

About obrARCHITECTURE inc
At obrARCHITECTURE inc. our desire is to create lasting and meaningful relationships with our clients, our projects and the environment. We are located in the heart of San Diego’s North Park arts district and are actively involved with the local art community. We are a broad-based small, focused firm and believe that each individual team member’s unique talents makes for a dynamic whole that can not only meet, but exceed our client’s expectations. As a small firm we believe strongly in being accessible and flexible with our clientele. With the partners’ wide array of experience, the firm has the ability to take on a wide variety of project sizes and types and can adjust quickly to changes in programs, budgets or designs. Our approach is a collaborative one, working side by side with our clients throughout the entire design process assisting, inspiring and leading our clients in reaching their project goals.