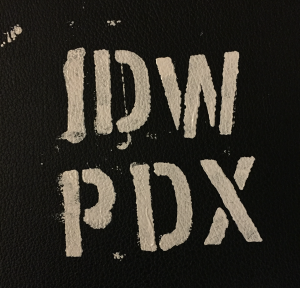 While nothing strictly Transformers-specific, we just got news from IDW Publishing that they are in fact opening a second branch - or a satellite, as they call it - in Portland, Oregon! The offices will actually serve as a launch pad for a new imprint, and will be directed by Dirk Wood. Check out more below in the official press release.

San Diego, CA (December 8, 2016) – IDW Publishing is headed to Portland, Oregon! While the company’s main base of operations will remain in San Diego, IDW is officially branching out to the burgeoning comic book scene in Portland, establishing a beachhead for its new phase of development, headed up by VP of Marketing, Dirk Wood.

Wood will serve as Creative Director for Woodworks, a brand new imprint of IDW to be run out of the Portland office. Woodworks will consist primarily of a new line of books, anchored by a high-end, curated magazine, featuring contributions by, and conversations with, the most talented and diverse creators in the industry. While the primary focus will be comics, it will also have a dash of general entertainment and culture features; film, TV, art, music, history, and more. Further details will be unveiled in the coming weeks as this budding line continues to develop.

“This was born from a conversation that Ted Adams and I had,” said Wood, “We were talking about our similar taste in books, and some of the projects we’d like to see happen. This led to talk about the incredible comics scene that’s taking off in Portland, and how we should be a part of it. Suddenly, we realized that these two thoughts fit each other perfectly. To be able to start this new chapter of the company I love, and expand our reach into the hometown that I love, is an incredible opportunity. I can’t wait to get started.”

IDW Publisher and CEO Ted Adams adds, “Dirk and I are both Oregonians -- we even went to the same university in Southern Oregon -- and this new line will represent the independent streak that's part of the DNA of everyone born there. That independence will include not just the books and magazines we make but also in the way we get them into the hands of readers. As everyone who has met him knows, Dirk is a one-of-a-kind talent and I can't wait to get started on this new venture with him.”

In addition to this exciting endeavor, Wood will be staying on with IDW in an advisory role concerning Trade Shows and Marketing, particularly as it relates to the Direct Comic Market.

IDW Entertainment currently serves as the worldwide distributor of Wynonna Earp airing on the Syfy Channel in the U.S. and is producing BBC America’s Dirk Gently, based the best seller by Douglas Adams starring Elijah Wood and Sam Barnett, and Brooklyn Animal Control for USA Network.

...except for Portland's significance in the earliest TF comics! Just one of those coincidences that does my spark good. Makes me believe I might actually catch up on IDW someday...
Re: IDW Publishing To Establish Satellite Office In Portland - Press Release (1846473)
Posted by Va'al on December 10th, 2016 @ 1:57pm CST

...except for Portland's significance in the earliest TF comics! Just one of those coincidences that does my spark good. Makes me believe I might actually catch up on IDW someday...

I meant the IDW move doesn't have anything strictly TF about it.. so far.