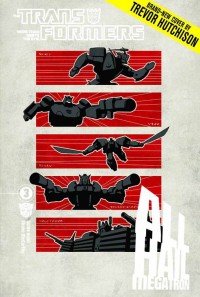 While some covers, including Tales of the Fallen 3: Jetfire and Best of the UK: Prey (reprints of the original Marvel UK comics) have been seen before, new covers on show include:
All Hail Megatron #16, featuring a Spike vs. Ravage story, and a setup for the new Bumblebee Mini-series, and
Trevor Hutchison's cover for the All Hail Megatron Trade Paperback #3, which will include the 5 Spotlight issues released during the AHM series run: Spotlight Blurr, Jazz, Drift, Cliffjumper and Metroplex).

To check out all the new cover images head on over to Comics Continuum by clicking here.

Blurrz wrote:Maybe it's a typo? Either way, I really, really like it.

Not sure why IDW has moved away from the "Spotlight" title, possibly a move to put all the McCarthy crud together in one spot (with Metroplex thrown in for good measure)...