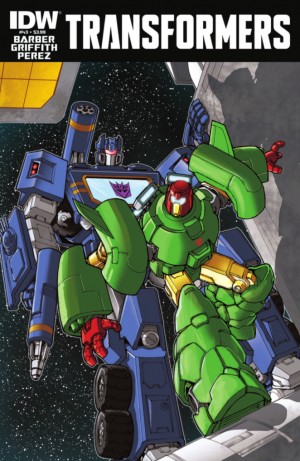 The second piece of IDW news, also via Newsarama, is the full preview of next week's The Transformers #43, in which we catch up with Soundwave and the Decepticon commune in progress on Jupiter - check it out below, and come back to Seibertron.com on the date of release for our usual review!

Bullet points:
Two fan-favorite characters together for the first time!
Who will command the SpaceBridge?
Variant Cover by James Biggie! Welp, color me embarrassed. For some reason in my head, I was picturing the events on Cybertron, Earth, and the Lost Light as three different series.

Welp, color me embarrassed. For some reason in my head, I was picturing the events on Cybertron, Earth, and the Lost Light as three different series.

Still, he travels between the two planets pretty quick.

They're not happening in exact same time. Issue 43 could take place now and 44 could be 1 or 2 or even 3 weeks later. They do have a space ship and shuttles.

Back in RID issue 5 happens about a month after 4 because they have cities built.

Also chronologically MTME is a month behind. That's why first aid is still on the lost light while on cybertron in Combiner Wars. Timeframe is a little wonky right now. For MTME CW is just about to kick off whereas on the other books is over and done
Re: IDW The Transformers #43 Full Preview (1710751)
Posted by Madeus Prime on July 18th, 2015 @ 12:43pm CDT
I'm really enjoying seeing the Decepticons interacting with humans, it's just so hilarious, to me anyway, to have Astrotrain being nice to humans after the bumpy docking. Not to mention having a human be revealed to be smarter then a 40+ foot tall robot.
Re: IDW The Transformers #43 Full Preview (1710782)
Posted by Shuttershock on July 18th, 2015 @ 1:48pm CDT
Once again, Brawl no-sells a joke through sheer thickness.


Also, I think we may be getting a possible explanation for the Onyx-form Buzzsaw pretty soon.
Re: IDW The Transformers #43 Full Preview (1711074)
Posted by BATTLEMASTER IIC on July 19th, 2015 @ 6:28am CDT
Laserbeak and Buzzsaw remind me of Statler and Waldorf from The Muppets.

BATTLEMASTER IIC wrote:Laserbeak and Buzzsaw remind me of Statler and Waldorf from The Muppets.

My thoughts exactly!
Re: IDW The Transformers #43 Full Preview (1711304)
Posted by D-Maximal_Primal on July 19th, 2015 @ 5:57pm CDT
Love the con attitudes, they are funny! THAT, is good transformers humor. Looking forward to this. Wonder what trouble Cosmos will get into

Synopsis
COSMOS UNLEASHED! A misunderstood AUTOBOT. A DECEPTICON space station. Cut off from their allies, SOUNDWAVE and COSMOS come face to face… alone.

We have been following the side-adventures of Cosmos, in his new, but not as upgraded as it seems, body, new paintjob, new sass. We have also seen glimpses of what Soundwave is up to on Jupiter, and how it might shape the future of what's left of the Decepticon movement - what happens when the two meet?

John Barber takes a very different approach to how the scenario might have unfolded just a couple of years back, with Soundwave in the driving, silent, cunning - even diplomatic - seat of the action. By placing Cosmos as our window into the Decepticon commune, we gain an entirely different, humorous side to the events.

And Cosmos is not the only relief in an otherwise potentially establishing-heavy issue of politics and ideologies. Barber has found his stride once again, and this title easily sets itself back to the shared vision of an intrigue-based, backstabbing-driven, turning and twisting to avoid debris, broken promises and head into future settings.

And then, of course, you have the human factor, predominantly with Blackrock, his type of humour, his take on things, and his own, personal scheming - though yet to be confirmed as if working with, for or in spite of Soundwave's plans. There is definitely something afoot, and clues are being sown..

We know Andrew Griffith's skill with imposing characters, statuesque Galvatron, stoic Soundwave - and adorable Cosmos, in his smaller, more compact and contained presence among the bulkier Decepticons. And of course, the wonderfully sharp 'Decepticon bird hecklers' Buzzsaw and Laserbeak in the opening scenes. And of course, just the general design of *everything*.

The scenes taking place in the wider scope of the Solar System are magnificently executed colour-wise by Josh Perez, too, who masterfully balances the inside of the various sets appearing in the issue with the much more vast landscape of space surrounding them.

Lettering duties, once more in Tom B. Long's capable hands, remind us that there is no sound in space, but plenty in spaces within space, Big or Floaty as they may be - and the dialogue is perfectly measured for the different interactions. As for covers, both the main Griffith/Perez and Casey Coller/Joana Lafuente help in capturing the tension between the major players in the issue, while the previously seen James Biggie RI variant is just pretty too look at. Very much so.

Perhaps a slower issue, in pacing and advancement of the overall plot - whatever that may be at this point, because I really have no idea, and revel in this feeling - but one that pits two unlikely characters against each other, only to have a very unexpected, deep, meaningful exchange of power and influence. If anything could make me want to see more of Cosmos, this is it.

Barber's writing of Soundwave has always been a personal favourite, and Griffith/Perez's visual rendition definitely adds to the stunning scenarios laid out by the script. The space scenes are wonderfully rendered, in both linework and colours, and the long conversation between Soundwave and Cosmos highlight just how deep the former's ideas run, and how hurt he has been. Heart of gold, indeed. Or is it?

I for one am glad Combiner Wars is over and we can get back to the good stuff. And the "gold" material in this issue was certainly Lazerbeak and Buzzsaw!

He's turned Laserbeak and Buzzsaw into these guys: And the result is just gold. Great issue, maybe my favorite of this book so far.
Re: IDW The Transformers #43 Full Preview (1712009)
Posted by ctrlFrequency on July 22nd, 2015 @ 8:49am CDT
I was not too entirely thrilled with Soundwave's comment at the end of his conversation with Cosmos about humans being no better than animals. It seemed out of character with his beginnings and all. But I'm certain there will be an explanation later (probably much much later)

Otherwise, for a world building issue, it was all full of Soundwave love

I liked it overall.
Click here to view additional comments about this topic at the Energon Pub Forums ...