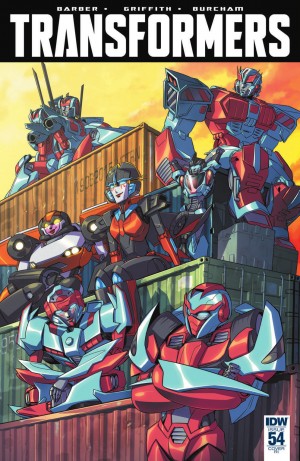 Spoiler Warning! The contents of this review will spoil significant parts of this issue, and possibly others in the IDW Transformers meta-series. "Trade paperback only" readers should wander away now! This is your one and only warning.

Synopsis and Credits
ALL HAIL OPTIMUS—part 5! OPTIMUS PRIME orders all all-out siege against the DECEPTICONS… leaving himself wide open to a counterattack by the human forces. Which is just what GALVATRON wanted all along…

Full creator credits can be found in our Vector Sigma Database page for this issue.

Editor's Note: The review copies received by Seibertron.com and other sites incorrectly state some art credits, so please accept our apologies for any misdirected or omitted art credits in this review as they are not intentional. 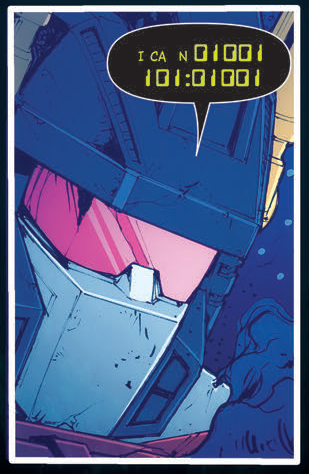 It can be Computron if you want it enough. Dare to dream.

Story
The story of All Hail Optimus continues with this week's release of The Transformers #54 from IDW Publishing, otherwise known as the book just about every Transformers fan is still calling Robots in Disguise, as is tradition. With last month leaving a not-necessarily-sour-but-still-odd taste in many readers' mouths, will this penultimate chapter right the course as we head towards the end of this arc and into the IDW Revolution? I found myself asking this before reading as a way to temper my expectations, and thus, this review must start out by saying that... 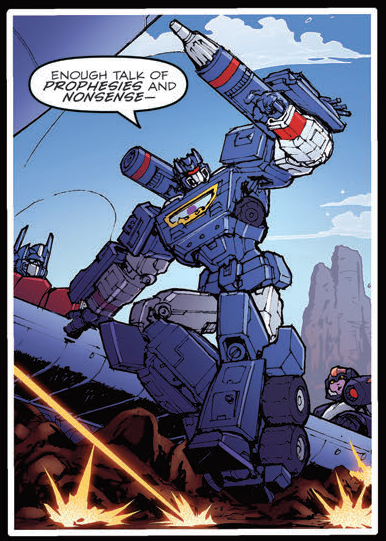 Well?
... Everything went better than expected! The tonal shift that occurs pretty quickly in issue 53 is almost immediately disposed of, making last month's effort feel even more odd in retrospect. The action is immediate and intense in this chapter, and it definitely feels like the type of storytelling and character interaction that we've come to expect from author John Barber's efforts.

With the Autobots and humans battling it out, plenty of character moments are allowed to occur, with our primary settings being Optimus' main force on the ground, and what looks like another Combiner War going on underwater. The scenes from the multiple fronts are well balanced and make the book a quick read, but not due to a lack of content, instead due to things moving swiftly and continuously. It's hard to put down, as there just aren't a lot of stopping points along the way. For a book using a franchise most known for action, this can't be marked as any fault. 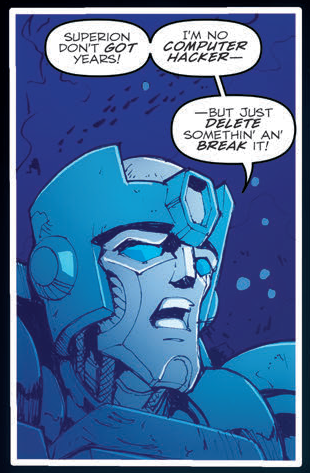 Wasn't "CSI: Cyber" canceled already?
That's not to say everything was picture perfect, as the action interspersed with plot progression felt a little rushed in places, and led to some odd blocking of the characters, to borrow a term from the theatre that I haven't used in years. Circuit feels a little too close to the action at points, many characters seem to have a lot of time to talk when they should be fighting off Earth Defense Force robots, and the villains here seem to give up a little too easily, but all of these are minor quibbles when I think about the one part of the plot that drove me absolutely nuts, which involved this particular panel:

"Oh great, you're going to pick on Spike again. We get it."
This happens as a call back to All Hail Megatron right when Soundwave decides to start being really cool, but it's followed by him realizing at this moment, of all of them, that (paraphrasing) "Maybe humans are more like us than I thought?" 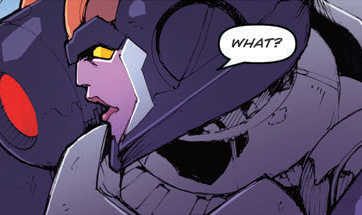 My thoughts exactly.
The few lines from Optimus Prime directly preceding this don't really make it better, but while I didn't like this turn of events, it is a subtle, faithful nod to Soundwave's origin story from way back in Robots in Disguise #22. Soundwave's surrender is really the only thing that stood out as just still off in this issue, so let's pivot back to praise because there is still much more here worthy of that. 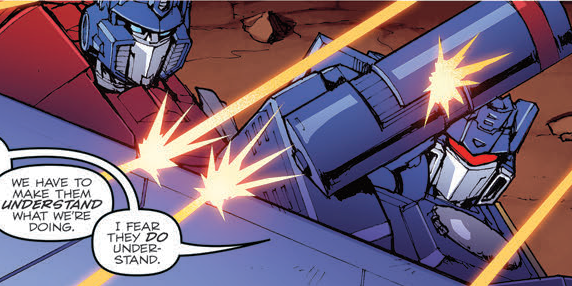 Meta-commentary on IDW Revolution already?
As the issue progresses and the battle begins to resolve, commentary from characters such as Jetfire help frame the stage, with the Autobots' own radio chatter lending a further assist. It's a helpful way to keep the narrative on a forward march, while still allowing for plenty to happen for readers that just want less talk and more action.

Arcee in particular is handled pretty well, with her character progression becoming still more clear. The brief interaction between Tracks and Needlenose is appreciated, saying plenty with both words and imagery. Hopefully even the massive cast list in the Revolution sub-series books allows for more of these cool, well built encounters that have been built up slowly and smartly. 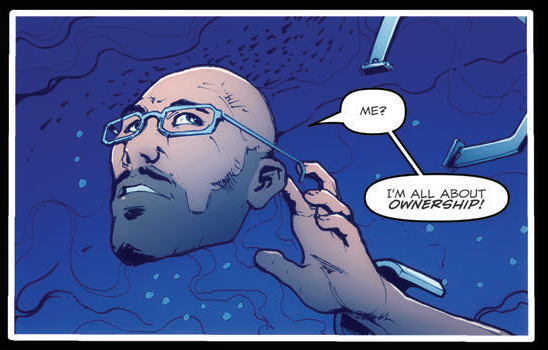 Just in time for the Developer's Conference.
Even Blackrock starts to get a bit more relevant again in this issue, though that may just be a side effect of the events that happen around him. If you're looking for some closure in "just where are they going with this guy?", you'll remain disappointed by this issue, but last few pages will have you forgetting that quickly. More on this later.

Art
The art is handled in this issue by Andrew Griffith, with colors by Josh Burcham and letters by, who else, Tom B. Long. I say "who else" not just because this guy is some kind of workhorse lettering machine, but because there are certain speech bubbles made just that much entirely better by them (see: the picture of Superion higher up in this review.) 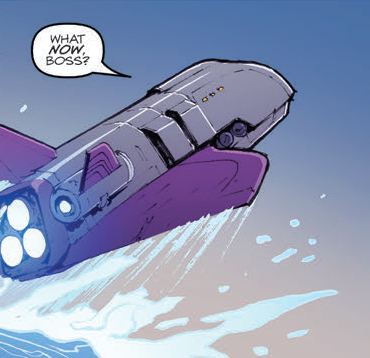 All I know is you should jettison some weight if you want to make it to Cybertron!
The colors remain superb, and the consistency of work in different settings helps build a bridge between issues 53 and 54 that might not otherwise exist. The deeper, moody tones used underwater in 53 are present here again, with the hazy, orange sunset of both battle and a desert setting ever present for the terrestrial scenes. Another 'A+' job from Burcham awaits in this issue, which should be a surprise to no one. 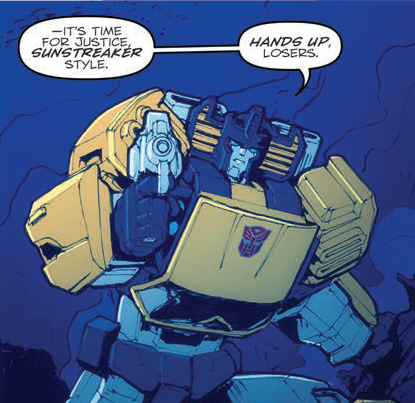 It is the year 2008
Andrew Griffith returns after a brief interlude last month, and picks up right where he left off, lending a familiar look and feel to the characters that we've come to expect in this part of the Transformers saga. Instances like the panel featuring Sunstreaker (seen above) really stand out, with clear attention to detail bringing life to bots that don't get a lot of "screen time" in this one. Jazz's subtle, but not hard to see smirks when he's in the background of certain panels is also very well done, showing that the little things can add up to help boost enjoyment of a comic even if it's just a small background detail.

There were a few panels where some of the line work seemed a bit erratic, but as these were in underwater scenes, this may have been a deliberate choice.

Final Thoughts
Transformers #54 helps quell some of the doubt that 53 left lingering, and offers a nice return to form for a series that's felt a bit lost during this entire arc. At the end of this issue we see, finally, some payoff for everything that's been occurring over the past several months. While I've spoiled a lot in this review, I won't spoil the big reveal at the end. Trust me on this part - it's big, it's cool, and it's a great hook to make me want to read more again next month. 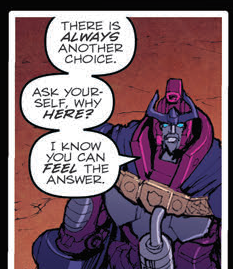 Well hopefully someone read the review and didn't just directly jump down here.
I've still not completely confident that the final issue of "All Hail Optimus" that's set to come our way in July is going to be a satisfying conclusion, but that's simply due to the external factor of the Revolution crossover event that's about to be either really cool or ruin everything. I can't decide on which that will be until the books have actually come out, but in the meantime, here's a score for this issue since that's a thing we do.

I'm intrigued by Soundwave and his sudden scanning of the human minds and how that changed his so quick. It felt a bit off, but at the same time, it was kinda awesome?

Also loved the whole titan rising part. Starscream, the "chosen one" who "raised a titan" and all that, watching as well as circuit and by extension everyone on Cybertron. Talk about backfiring in the best of ways.

And what is with Alpha Trion? The old dude is someone I have been keeping my eye on, and dang he sure knows now to raise a duex es machina, doesn't he? The 13 in IDW may not be divine, but this one sure is proving to be...interesting.

D-Maximus_Primal wrote:This felt completely different from 53 really. I agree with Scotty that this felt a little more Barber-ish.

I'm intrigued by Soundwave and his sudden scanning of the human minds and how that changed his so quick. It felt a bit off, but at the same time, it was kinda awesome?

Also loved the whole titan rising part. Starscream, the "chosen one" who "raised a titan" and all that, watching as well as circuit and by extension everyone on Cybertron. Talk about backfiring in the best of ways.

And what is with Alpha Trion? The old dude is someone I have been keeping my eye on, and dang he sure knows now to raise a duex es machina, doesn't he? The 13 in IDW may not be divine, but this one sure is proving to be...interesting.

I'm a bit sad about Superion, but there are ways around him not forming ever again

Well he just can't form on earth and he's going to need a lot of fixing to get his brain back to normal. That being said I'm happy to see that the Arialbots might be getting some individual time especially since we didn't even know if he could separate until a couple issues ago.

I really enjoyed this issue. It was fun! It met all my expectations and was an exciting issue.

Every time I see Optimus calling forth a Titan and seeing one erupt from the ground just makes me smile. It's feels like a scene from a movie.
Re: IDW The Transformers #54 Review (1797941)
Posted by D-Maximal_Primal on June 15th, 2016 @ 9:49am CDT

Randomhero wrote:Every time I see Optimus calling forth a Titan and seeing one erupt from the ground just makes me smile. It's feels like a scene from a movie.

Ever since Fall of Cybertron, that has been my thing with Optimus. "Heed the call of the last Prime" deal and all that, it's awesome!

And I did enjoy the issue, don't get me wrong. It was a good one and it is worth the read and reread